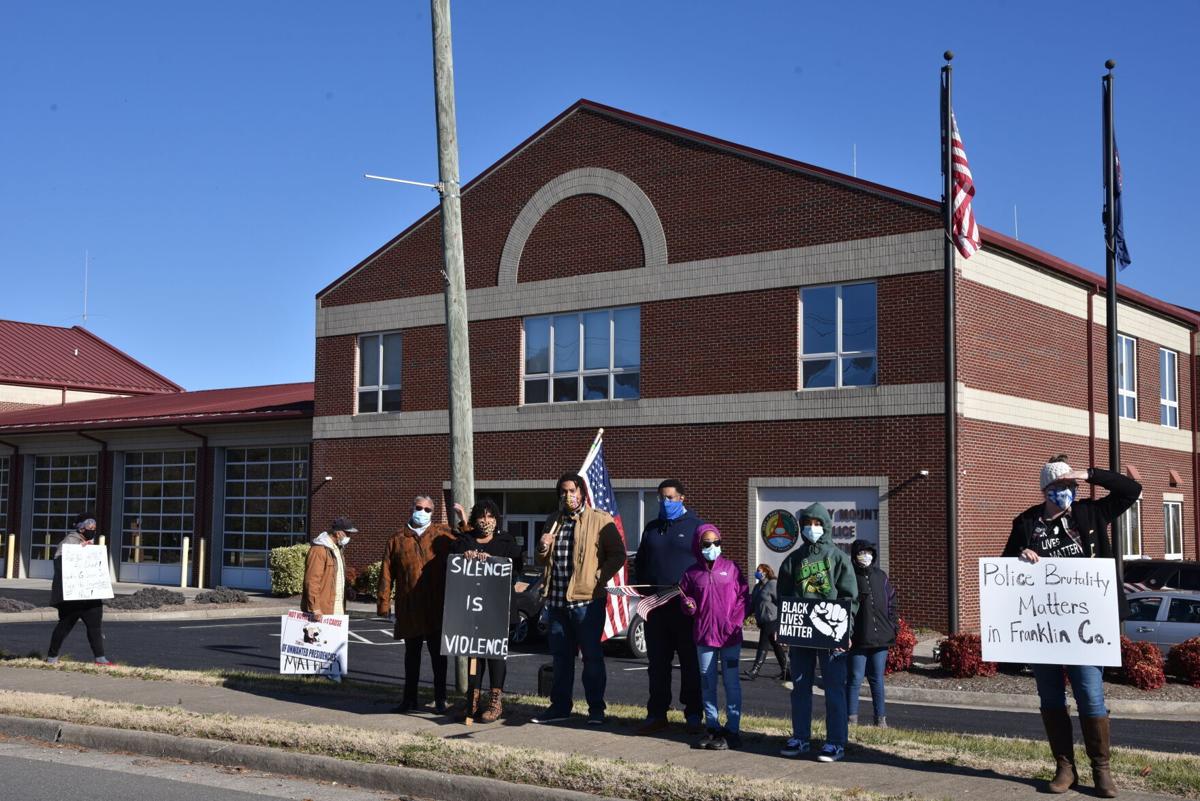 Members of Black Lives Matter - Franklin County protest on Sunday afternoon in front of the Rocky Mount Police Department after two of the department's officers were put on administrative leave after participating in the riot at the U.S. Capitol on Wednesday. 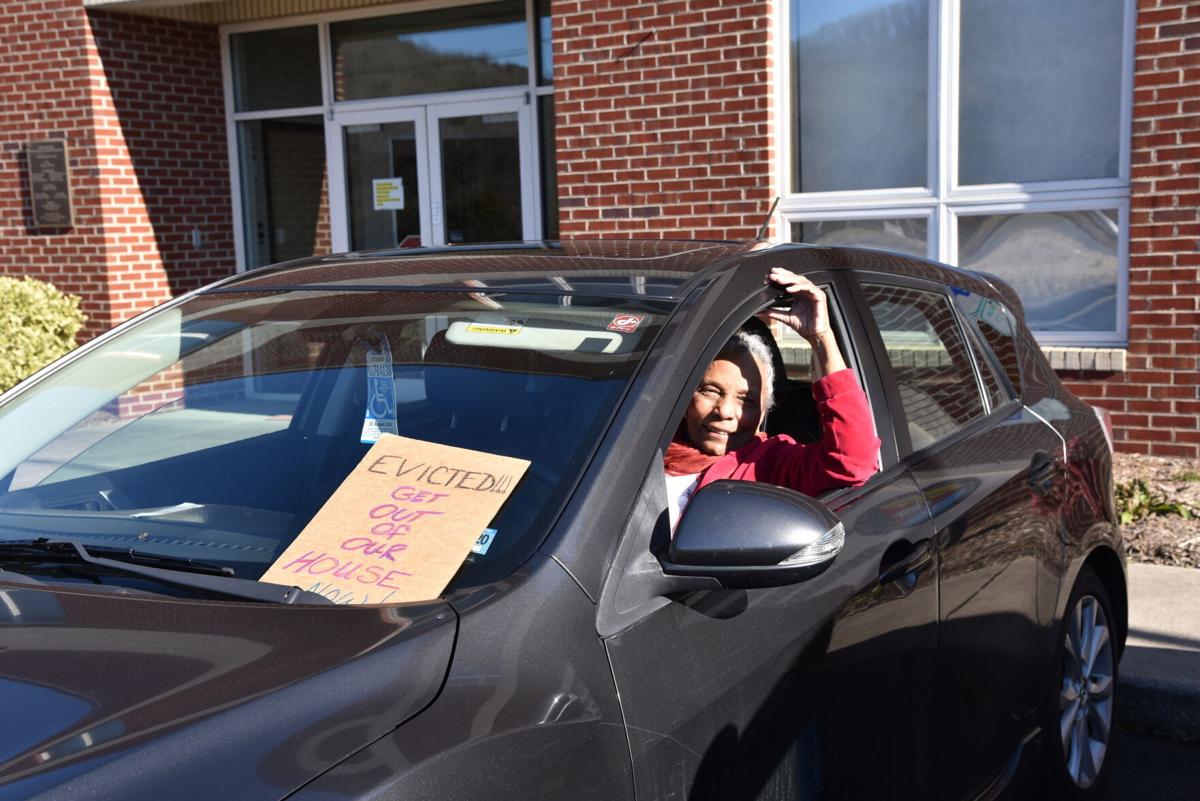 Gloria Freeman Martin sits in her car outside the Rocky Mount Police Department. “We are not asking for unity,” she said. “We are asking for equality.”

This story has been edited with the fact that the police officers put on leave serve in Rocky Mountain, Virginia.

In the image, Rocky Mount Police Sgt. T.J. Robertson and Officer Jacob Fracker stand before a statue of John Stark, a Revolutionary War officer from New Hampshire. Robertson appears to be pointing at Fracker, while Fracker, who took the selfie, is making an obscene gesture at the camera.

Reached by phone Sunday, Robertson said he and Fracker did nothing illegal. “I don’t have anything to hide,” he said.

The Rocky Mount Police Department on Sunday said it notified federal authorities that two of its off-duty officers were present during the Capitol attack, which a town news release described only as “an event in Washington, D.C.” Town Manager James Ervin and Police Chief Ken Criner did not return phone and email messages seeking comment Sunday afternoon.

The photo was originally sent only to other employees in the police department and wasn’t meant to be shared publicly, Robertson said.

However, after it was leaked to social media, he reposted it on his own Facebook page. “I wasn’t trying to keep it a secret,” Robertson said. “It’s being taken totally out of context. I’m not afraid of this being posted, because I’ve done nothing wrong.”

In a screenshot of a Facebook post that was also circulating on social media, Robertson wrote, “CNN and the Left are just mad because we actually attacked the government who is the problem and not some random small business … The right IN ONE DAY took the f*** U.S. Capitol. Keep poking us.”

Sunday, Robertson said he did not support the violence that happened inside the Capitol. “Absolutely not,” he said. “For it to go like that is absolutely ridiculous.”

Robertson insisted that he and Fracker broke no laws. He said they went in the building about 2 or 3 p.m. “We were escorted in by the Capitol Police, shown around and told, ‘As long as you stay here, you’re fine.’” They stayed within the cordoned areas, he said.

Thousands of supporters of President Donald Trump gathered Wednesday to hear him speak near the White House as Congress met to certify the electoral votes for President-elect Joe Biden. The supporters then marched to the Capitol and stormed the building, temporarily disrupting the final affirmation of Trump’s election loss. Five people have died as a result of the clash, including a Capitol police officer.

Robertson said that he and Fracker did not take part in any of the violent confrontations or ransacking that took place inside the building, nor were they aware at the time that the protest had turned violent.

“The Capitol building is as big as our town,” he said. “Where I was at there was no violence. There was no fighting with police officers. The door was wide open and police officers were actually handing bottles of water out to people that came in.”

The police department said the officers have been placed on administrative leave pending reviews. Robertson said he and Fracker are on paid leave.

As news of the officers’ presence during the Capitol riot spread Sunday afternoon, about a dozen members of Black Lives Matter of Franklin County gathered outside the town police building.

Craighead carried a sign that said “Silence is Violence.”

Franklin County School Board Member Penny Blue joined the protesters. “I’m here because the town police, along with the board of supervisors and other people, leadership, in this community are all complicit with what’s going on. They are against Black Lives Matter, but support the militia,” she said. “When we marched this summer, we had no weapons and we had children. The militia was down the street dressed with guns. It’s because the leadership in this town and this city is complicit with what is going on.”

He and Fracker went to the rally in D.C. in protest of what they consider numerous irregularities in how the votes for the November election were tallied, he said. “I’m not even a big Trump supporter,” Robertson said.

Though no credible evidence exists that widespread voter fraud took place in the U.S. elections, Robertson said he believes there’s still investigation needed. “The irregularities that exist should be looked into,” he said.

Robertson is Fracker’s supervisor in the department. Fracker has been with the Rocky Mount force for about 18 months. Robertson joined the department in 2001, left in 2010 and returned in 2014.

At the Black Lives Matter protest, Gloria Freeman Martin sat in her car parked outside the department with a cardboard windshield sign saying, “EVICTED!!! Get out of our house now!”

“We are never going to solve this problem. I think President Trump was a good thing for America because he finally let people who were hiding come from under the cover and think they could get away with things. And right now while it’s out in the open, we should not be working for unity, we should be working for equality — that’s what Black Lives Matter is all about,” Martin said. “We’re not asking for unity, we are asking for equality. To live in this world, in America, just like white people do and be treated just like human beings, not because we are white or black, just be treated like humans.”

At least five employees, some with decades of experience within the Administrative Office of the Courts, are now gone, including McKinley Wooten, who was replaced by special Superior Court Judge Andrew Heath. The AOC's most recent deputy director, general counsel and a lobbyist at the legislature for the agency also are no longer reporting to work, according to Judicial Branch spokeswoman Sharon Gladwell.

The university said its investigation “did not substantiate any significant allegations.”

The first North Carolina municipalities are acting to expand LGBTQ rights again a month since the expiration of a moratorium on nondiscrimination ordinances agreed to years ago as a compromise to do away with the state's “bathroom bill.”

A bridge too far gone: Sunset Beach residents lament a life once spent in isolation

On the island today, there remains nostalgia for the modest but community-defining bridge.

Essential workers in N.C. will get COVID-19 vaccine priority. What does that mean?

RALEIGH — North Carolina Gov. Roy Cooper outlined an updated plan Wednesday for who gets the COVID-19 vaccine and when, prioritizing older adu…

Dozens arrested during riot at US Capitol. These suspects are from NC.

Data from the CDC ranks North Carolina as the 10th slowest state in the country per capita in administering doses.

(TNS) — The TV show American Pickers will be filming in North Carolina in March, and they're looking for people with large antique collections…

How N.C. Republicans may handle redistricting in 2021 is causing concern

With Democrats heading into 2021 with control of both the presidency and Congress, the GOP is looking for a chance to take back power.

Members of Black Lives Matter - Franklin County protest on Sunday afternoon in front of the Rocky Mount Police Department after two of the department's officers were put on administrative leave after participating in the riot at the U.S. Capitol on Wednesday.

Gloria Freeman Martin sits in her car outside the Rocky Mount Police Department. “We are not asking for unity,” she said. “We are asking for equality.”