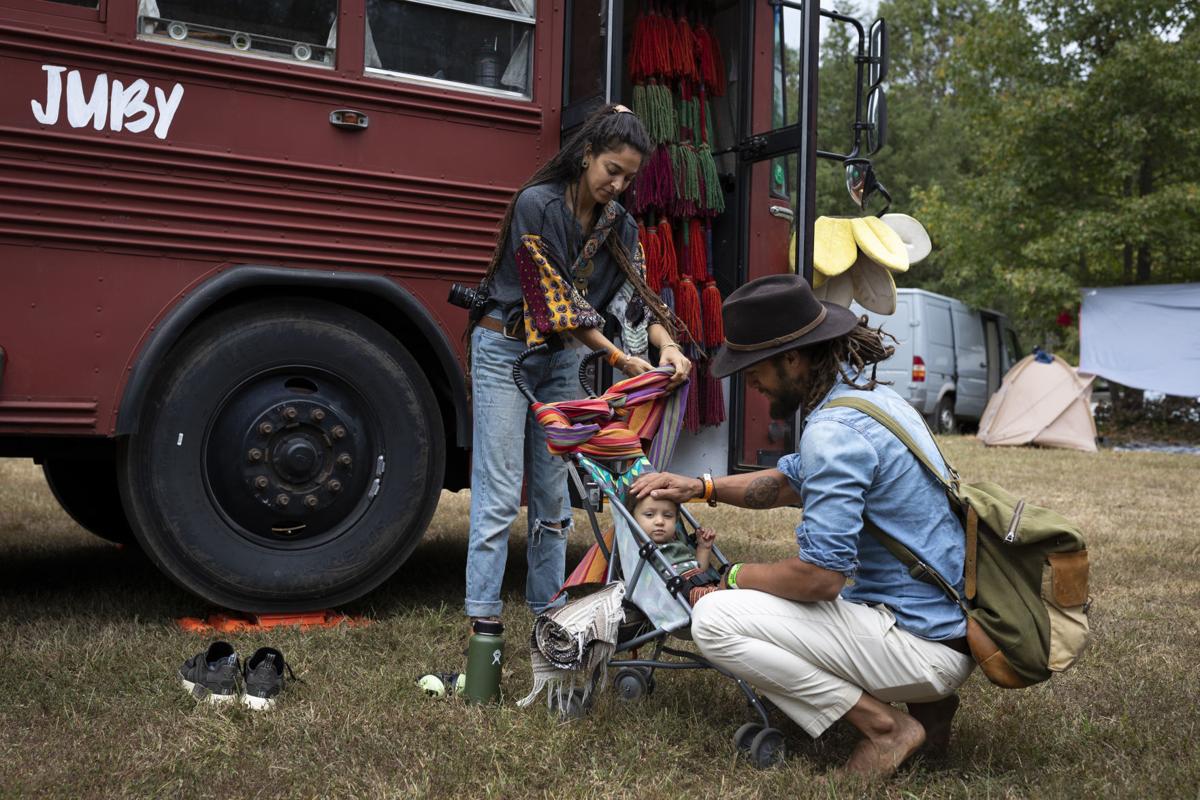 Justin and Juby Maness get Azalea ready to go before setting out to enjoy the day at the Shakori Hills music festival on Saturday morning. 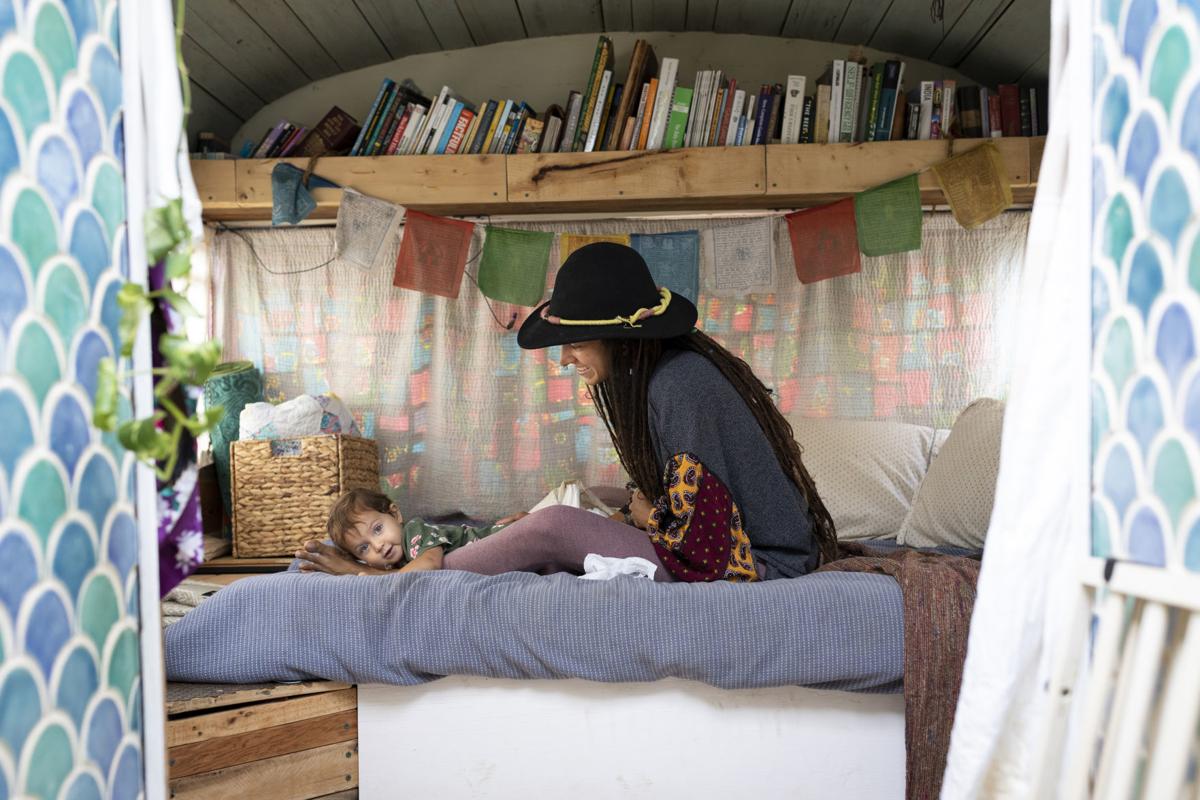 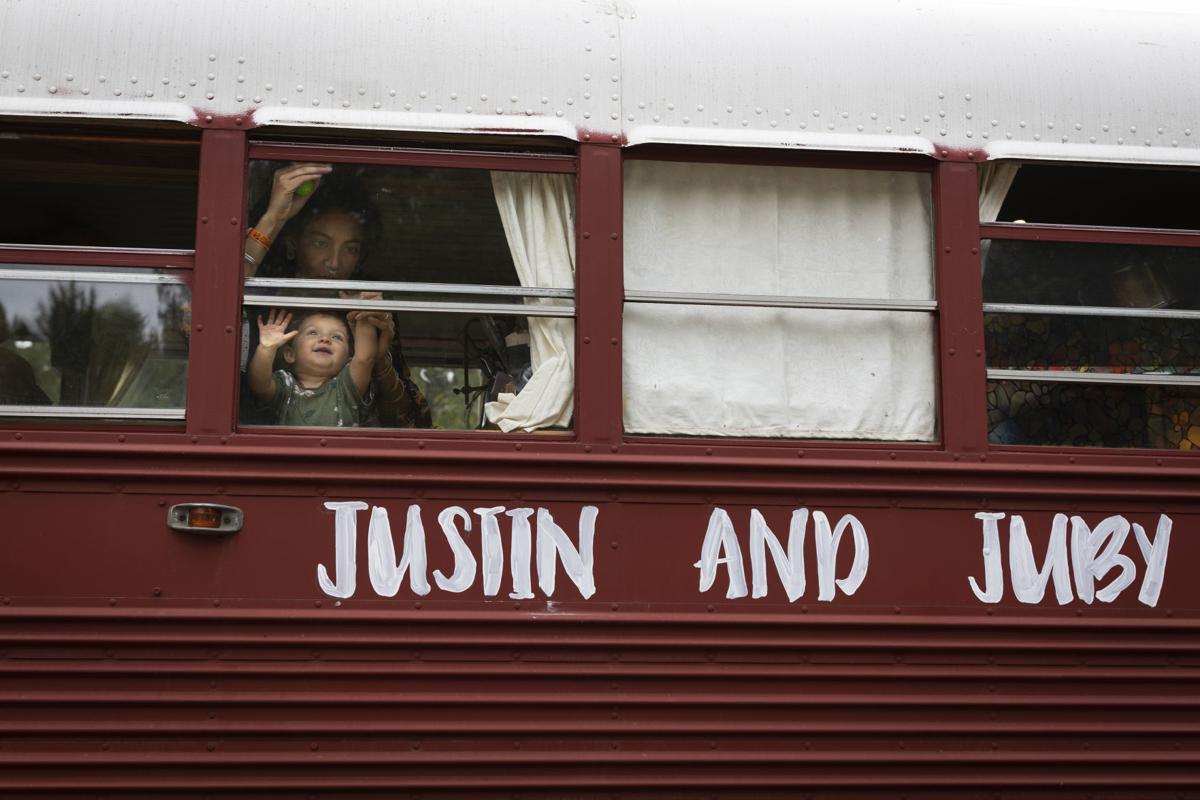 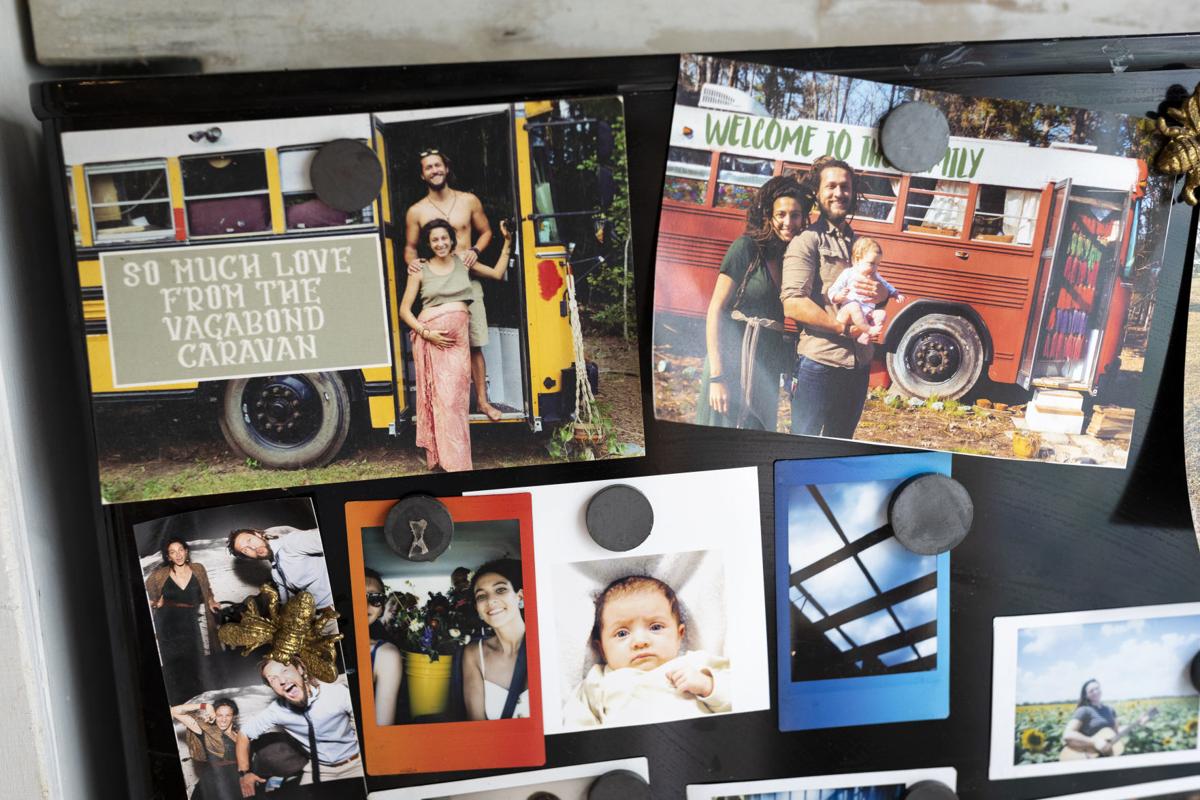 Photos with friends and family hang on the fridge in Justin and Juby Maness’ bus. 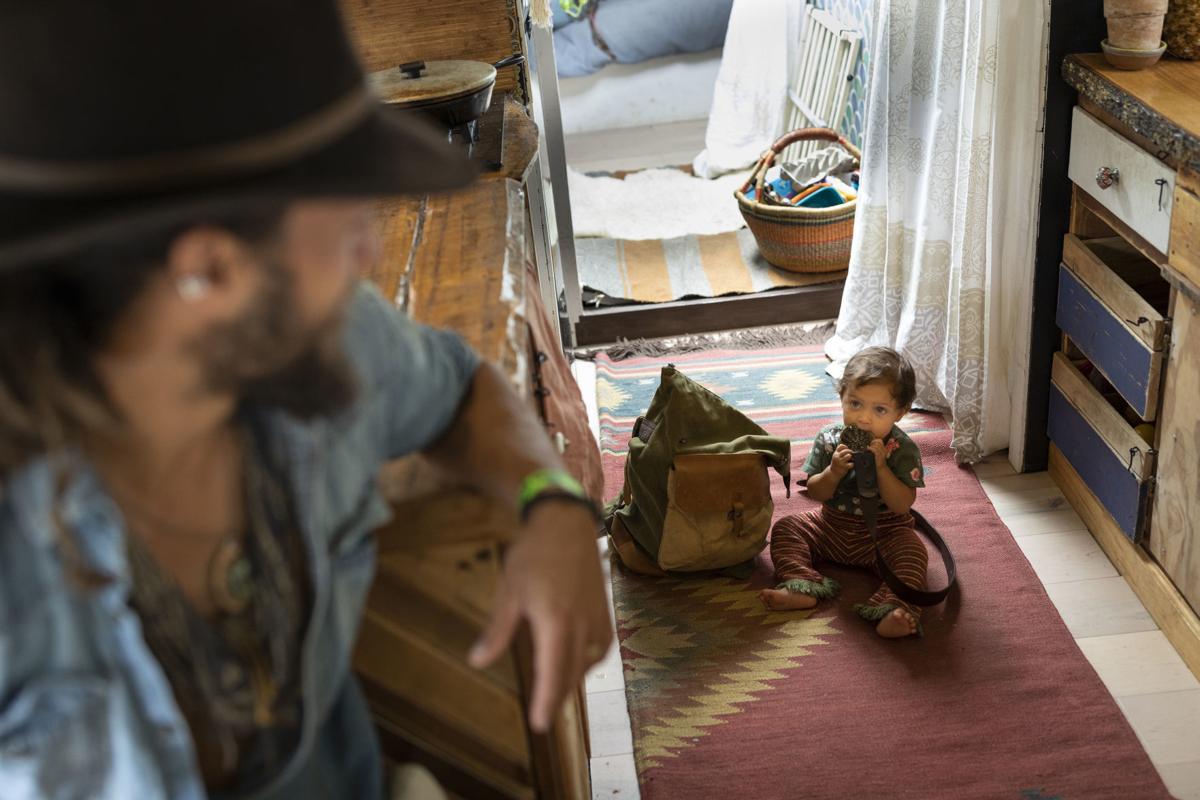 Justin Maness keeps an eye on Azalea, their 10-month-old daughter, while eating breakfast in their bus on Saturday morning. Azalea is full of energy and requires supervision at all times.

Justin and Juby Maness get Azalea ready to go before setting out to enjoy the day at the Shakori Hills music festival on Saturday morning.

Photos with friends and family hang on the fridge in Justin and Juby Maness’ bus.

Justin Maness keeps an eye on Azalea, their 10-month-old daughter, while eating breakfast in their bus on Saturday morning. Azalea is full of energy and requires supervision at all times.

The late-afternoon sunlight trickles through the windows, bouncing off the colorful Spanish tiles lining the wall, filtering through the prayer flags hanging from a shelf with books on sustainable living before settling on the wooden floorboards.

Juby Maness looks up from the bell pepper she’s chopping to grab a mason jar filled with spices, lights the single burner and turns back to cutting the pepper, her long dreadlocks swinging behind her.

Her husband, Justin Maness, passes by carrying their 10-month-old baby, Azalea. In a move like two acrobats swapping positions on a tightrope, he slides around his wife, narrowly avoiding a collision with the counter on the other side of the kitchen. The top of his head is inches from the ceiling.

The baby squeals, and Justin throws his head back and laughs. Birds are chirping, the night is starting to cool down and another weekend of adventure is starting.

It’s a good night to be living in a school bus.

Two years ago, Justin and Juby, both age 29, decided to trade their home in Durham for a 33-foot school bus, joining an ever-growing community of traveling adventurers living a mobile lifestyle. The two are happier than ever.

“When you look back on your life, your memories and the people you know and the things you did, a huge bank account doesn’t matter,” Justin said. “I want to remember this time I get waking up next to my daughter every single day and seeing her laugh and smile.”

Anywhere from 500,000 to 1 million Americans live full-time in an RV, said Kevin Broom, director of media relations for the RV Industry Association. That doesn’t include the tens of thousands living out of school buses, vans, trailers and other portable homes.

Micah Pulleyn, founder and director of the Asheville Van Life Rally, sees more and more people turning away from a society based in consumerism and material goods to live or travel in alternative rigs.

“People have this primal craving for freedom and adventure and genuine connection with others,” Pulleyn said. “It’s something that’s found sitting around a campfire sharing stories with friends, fostering that authentic connection. Van life is creating a space for people to meet and share their kindness, curiosity and fears.”

The pervasiveness of the internet makes this possible, Broom said, as more and more people are able to work remotely from the road.

The 2008 housing crisis prompted many people to abandon traditional brick-and-mortar homes and opt into tiny homes or other alternative living solutions to cut down on costs, Justin said. Now, an entire industry has sprung up around the concept. Van conversion companies are booked months in advance, advice blogs are all over the internet and “Van Life” groups on social media platforms have thousands of members.

“A lot of people thought this would be a fad,” he said. “But now that the economy is actually growing and doing well, it’s still around and going strong, which I think is interesting and something I didn’t expect either.”

Meet Juby: an artist who grew up splitting her time between the United Kingdom and the United States. She attended the Savannah College of Art and Design to study fashion and painting before transferring to graduate from Parsons Paris in 2013, but she wasn’t ready to settle down. She moved to Hawaii to work on an organic orchid farm.

Enter Justin: a beekeeper who grew up with his grandparents in Fayetteville before attending N.C. State University to study horticulture. During college, he went to Hawaii to intern on a permaculture farm. There, he met Juby.

In 2015, the couple moved back to Durham. Juby was running a successful boutique, Moon Flower Child, and Justin worked at Buddha Bee Apiary, maintaining bee hives across the state. But even with steady work, they were still living paycheck to paycheck.

Juby — the creative, impulsive one, Justin jokes — bought a short school bus for her business, turning it into a mobile boutique. In 2017, she started traveling up and down the East Coast selling her items at markets and participating in pop-up events.

“That really triggered a desire to travel more, and we really liked the bus vibe,” Juby said. “We started falling into van life and looking into alternative ways to live because we were tired of trying to make ends meet in Durham.”

Buying a bus to live in full-time was the logical next step. Juby saw a posting on eBay for a former Salem Public Schools bus. The two went to Greensboro to check it out.

“I should have known, we were not leaving that place without the bus,” Justin said.

What does it take to transform a school bus into a functioning home for a family of three? A year and a half of intensive labor.

They painted the bus red and installed an air-conditioning unit. Solar panels. A bathroom, complete with a composting toilet; a walk-through shower that doubles as Azalea’s play area; a kitchen sink, stove and full-sized fridge. Every aspect of their bus was designed and built in a way that would work for their family, Justin said.

Small touches, like cabinet doors wood-burned with Juby’s designs or Polaroid pictures of friends and family on the wall make the bus feel like home.

As they began renovations, the couple wanted to document the process from start to finish. Armed with their trusty GoPro camera, they started a YouTube channel with weekly videos describing the construction process and day-to-day life on the bus. They also launched an Instagram account with over 11,000 followers and counting.

Juby credits the actor Jason Momoa of “Aquaman” with their explosion of online popularity. Justin frequently gets mistaken for the famous actor, and one of their “Week in the Life” videos featured a thumbnail photo that viewers thought was Momoa and his wife, Lisa Bonet. Fans flocked to their YouTube channel thinking Momoa had moved into a bus, only to become hooked on Justin and Juby’s content.

These moments — the days spent practicing yoga on the rocks of a mountain range in Connecticut, dancing at a music festival or sitting outside sharing a meal while visiting a friend’s farm — make their unconventional life worth the sacrifice.

Justin still misses air conditioning, and the two agree it would be nice to one day have some “real” furniture, but for now, their bus is everything they hoped it would be.

Environmentally, they’re able to live a more sustainable life. Yes, it takes lots of diesel fuel to fill the bus, which gets 8 miles per gallon, but no one is perfect, Justin said. When you only have 100 gallons of water or run all appliances off a single solar-powered battery, you quickly learn to conserve resources.

Financially, they’re in a good place. They’re no longer paying for housing, and their utility bills have dropped dramatically. Their earned income is slowly starting to rise.

From their school bus, Juby creates items for her boutique, which she then sells through her online store. Justin’s work is slightly harder to make mobile: once a month, he travels back to North Carolina to check on the bee hives he’s set up across the state. Their YouTube and Instagram accounts also help.

To be successful in van life, Justin said, you must know why you want to live an unconventional life.

“We realized our ‘why’ and started to manifest the type of life that we wanted,” Justin said. “Figure out that ‘why,’ what’s going to drive you when your wife is pregnant and it’s about to be winter and you’re about to lose your mind with all the renovations. If it’s a strong ‘why,’ you’ll make it through to this time where you’re doing it and loving it.”

At Media Hub, students are hand-picked from various concentrations in the UNC School of Media and Journalism to work together to find, produce and market stories with state, regional, and at times, national appeal.

Writer Molly Horak is a senior from Asheville, majoring in reporting and political science.

Photographer Nathan Kilma is a senior from Chapel Hill, majoring in photo/video journalism and global studies.