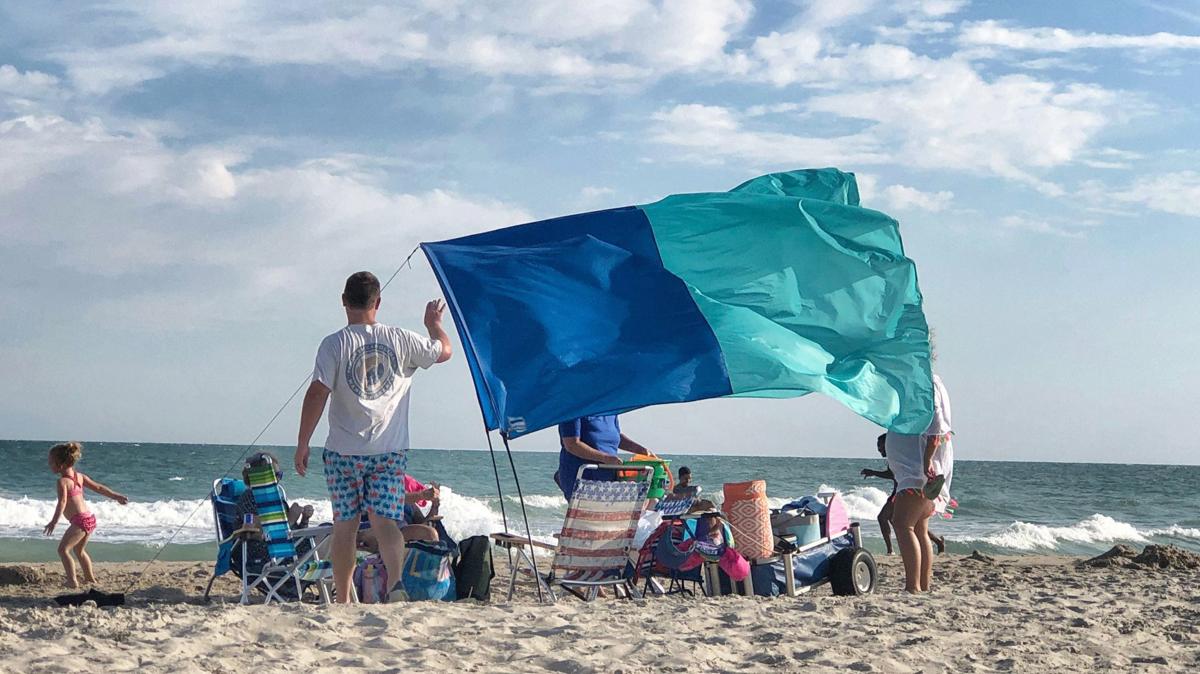 A family enjoys relief from the sun under a Shibumi Shade at Emerald Isle in July. 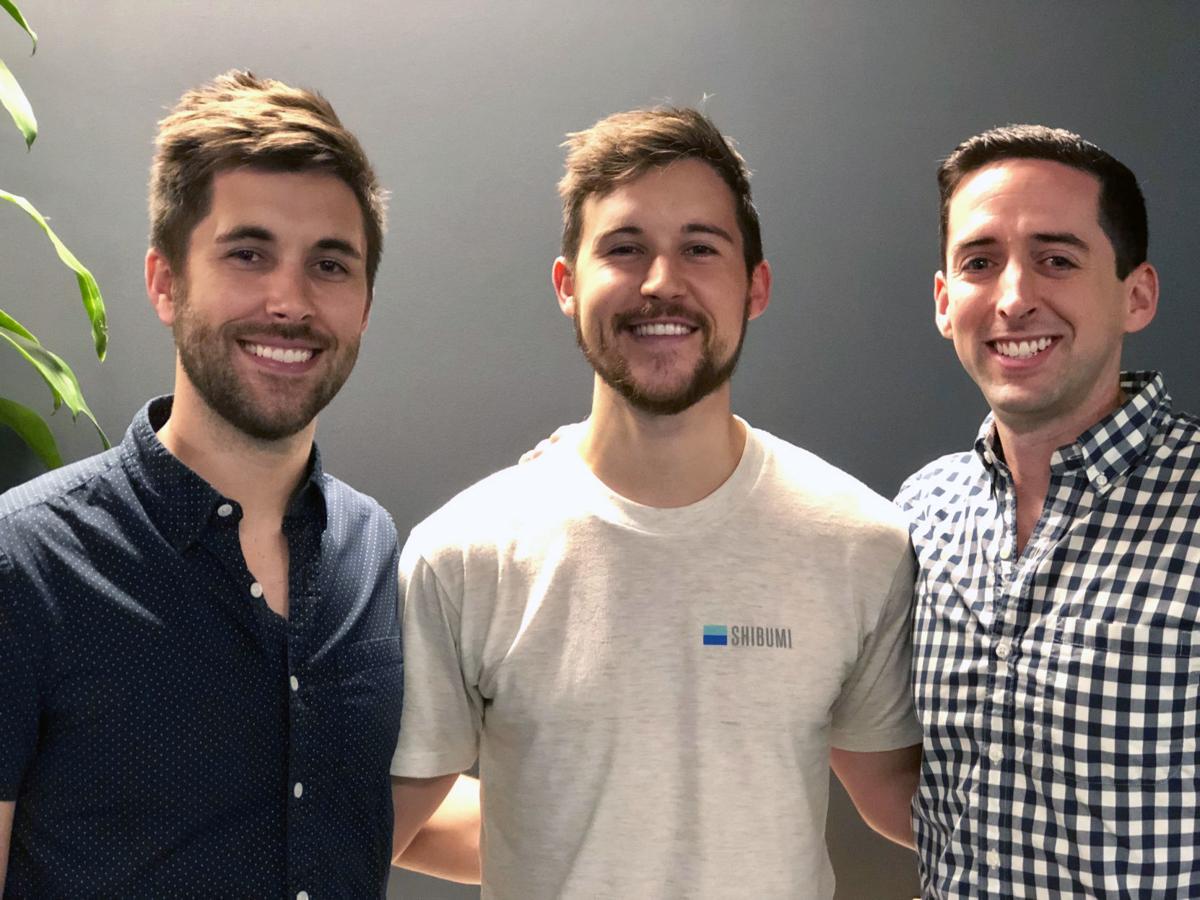 Dane Barnes, Scott Barnes and Alex Slater created the Shibumi Shade, which has proliferated across N.C. beaches this year. The Barnes brothers grew up in Winston-Salem and vacationed each summer at Emerald Isle.

A family enjoys relief from the sun under a Shibumi Shade at Emerald Isle in July.

Dane Barnes, Scott Barnes and Alex Slater created the Shibumi Shade, which has proliferated across N.C. beaches this year. The Barnes brothers grew up in Winston-Salem and vacationed each summer at Emerald Isle.

EMERALD ISLE — As the sun heated the sand at the base of Bogue Inlet Pier on a Saturday morning in late July, day-trippers poured out of their cars to claim pieces of the beach.

One after another, they raised what looked at first like a two-tone blue flag, identifying them as members of an alliance of consumers who have discovered 2019’s must-have beach accessory. It’s a surprisingly simple sun shade that was designed by a trio of North Carolina men who didn’t plan to sell it, don’t advertise it and, at the moment, can’t make it fast enough to meet demand.

“It’s kind of crazy,” admits Dane Barnes, who with his brother, Scott, and best friend, Alex Slater, began working on what they now call the Shibumi Shade in 2015. The trio are now on the verge of leaving their day jobs and going into the Shibumi business full time.

Dane Barnes and Slater are both 32. Scott Barnes is 29.

Growing up in Winston-Salem, the Barnes brothers spent a week every summer in a rented cottage at Emerald Isle with extended family. Dane Barnes says it was a favorite time of year, carefree and fun except for one chore that fell to the boys: hauling unwieldy beach umbrellas and rusty-framed shade tents onto the sand every morning, setting them up in the wind, then dragging them back at sunset.

Later, the Barneses’ parents bought a place of their own at Emerald Isle, and so did Slater’s folks. As it remained the young men’s job to make sure there was adequate sun protection on the beach, they began to spend some of the leisure hours between setup and takedown pondering a better system.

Over the years, a fair amount of engineering and architectural consideration has gone into extending the amount of time humans can spend on the beach without getting third-degree sunburn. Every solution — from umbrellas to tents to beach cabanas —has flaws.

The Barnes brothers and Slater had a different idea, hoping to work with the wind instead of constantly fighting it.

“We kind of started with an arch,” Dane Barnes said, and at the prompting of a friend, they went to a hardware store and bought several pieces of plumbing conduit, which they joined together and flexed into an upside-down “U.”

They contemplated the next step for a while, until another friend showed up with a portable sewing machine and a bag of fabric and sewing supplies. They watched YouTube videos to learn how to thread and operate the machine, and managed to stitch together a big rectangle of ripstop nylon with a sleeve along one edge to slip over the plastic arch.

They took it to the beach early in the summer of 2016, faced it into the wind, pushed each end of the arch into the sand and ran a line from the center of the arch to the ground a few feet in front of it. When they let go, Dane Barnes said, the canopy lifted like a sail in the breeze and the whole thing stayed put. “We were stunned, it worked so well,” Barnes said.

Immediately, two lawyers who were walking on the strand stopped and asked the guys where they got the contraption, which provided about 180 square feet of shade and weighed less than a full cooler.

“We were just making it for ourselves,” Scott Barnes said. “We never planned to sell it.”

But that summer, they sold 32 of what they first called the Shade Wave, each one stitched together by Dane Barnes and Slater in a spare bedroom at Slater’s apartment, at night after the men had finished work at their real jobs. Dane is a salesman for a company that makes hiring software. Slater sells recruitment advertising in the healthcare industry.

At the time, Scott Barnes was traveling the country as a strategy consultant for healthcare companies. He helped with the project on weekends when he was home.

A business is born

All three are graduates of UNC. They all live in Raleigh.

The shades they made that summer came in a variety of colors and were delivered to buyers in fabric tote bags.

There have been a few modifications, besides the name change, which plays off the name of a Chapel Hill apartment complex where all three of the men lived while they were in college. Instead of plastic tubing, the arch is now made of tent poles connected by shock cord. The 10-by-18-foot canopy now comes in only one color combination, to streamline the sewing, which is now done in Asheboro under contract. The counterweight is a bag attached to the center of the arch, which users fill halfway with sand to hold the canopy in the air.

On the Shibumi website, the company acknowledges that the design won’t work in all conditions; it takes at least a 3 mph wind to keep the canopy aloft, and it likely would not stand in extremely high winds. At either extreme, the maker counsels, maybe it’s a better day for goofy golf or curling up with a book.

With demand for the shade still increasing, the Barnes brothers and Slater say they have given notice at their jobs and by the end of the year, all three expect to be working full time in the business. Each says the other two are among their favorite people in the world, and what could be better than working with people you enjoy?

Right now, Dane Barnes says, the Shibumi Shade is available online and through 20 retailers. The company doesn’t advertise, relying on word-of-mouth and people who see the canopies set up on a beach.

Debby Byrne, office manager of the Ace Hardware store at Emerald Isle, said her store started selling the shade in 2017.

So far, she said, she hasn’t heard any complaints about them.

“The only thing wrong I know that’s wrong with them is, I can’t get enough of ‘em,” Byrne said.