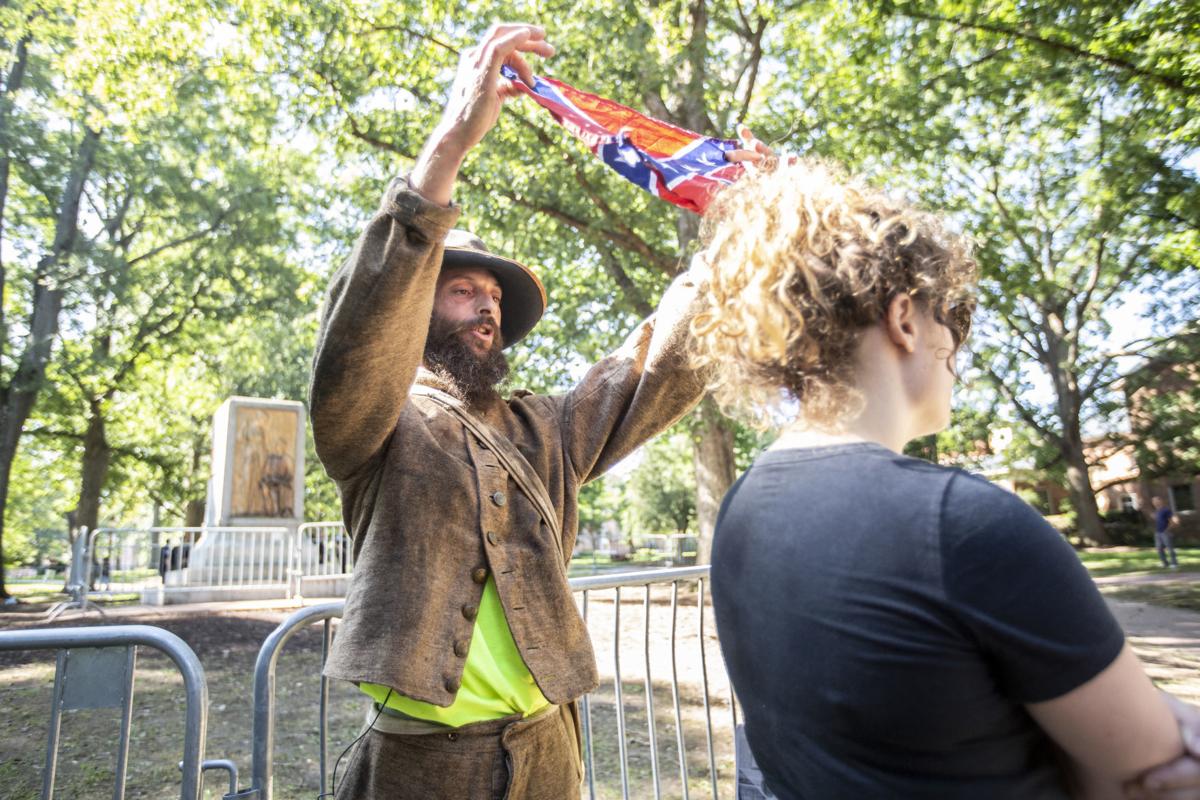 Casey Becknell of Lexington waves a Confederate flag in a protester’s face during a clash at the Silent Sam site in 2018. 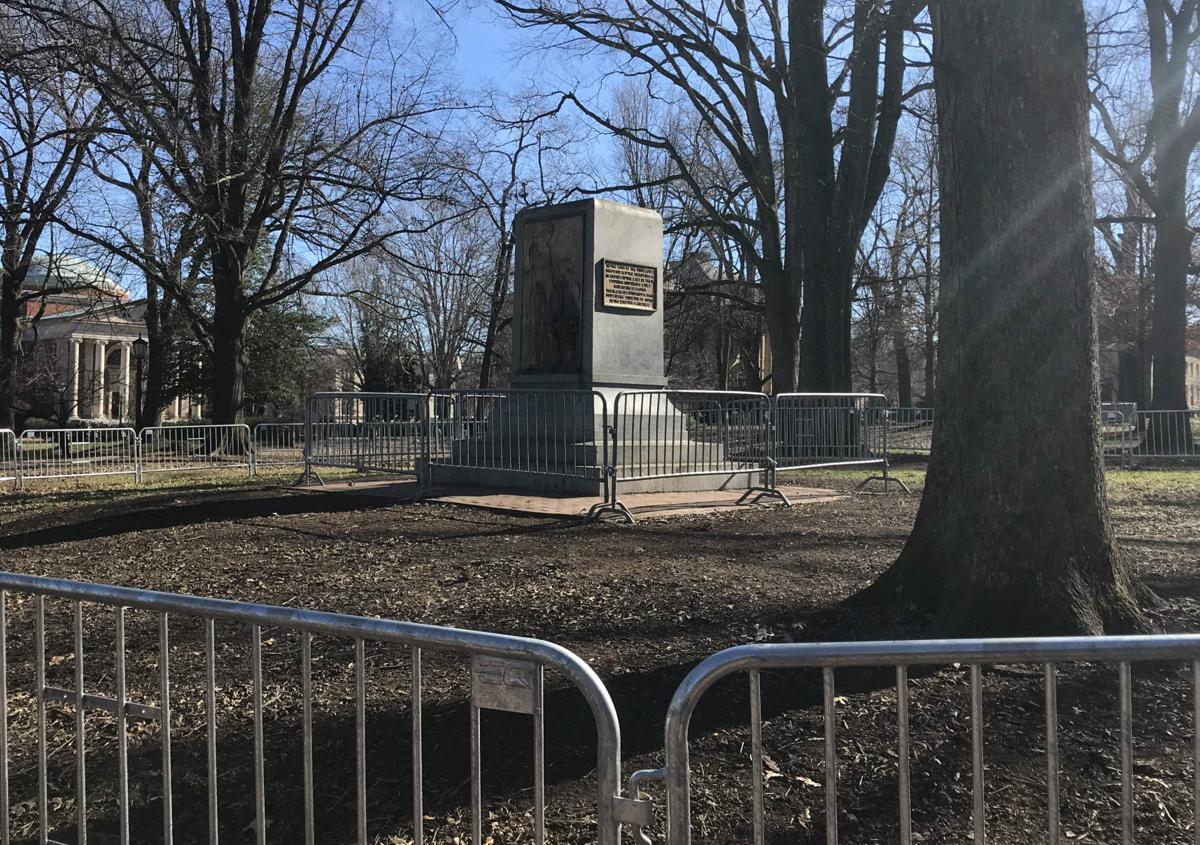 The pedestal on the UNC-Chapel Hill campus that once held the Confederate monument known as Silent Sam is shown surrounded by two rows of police barricades on Jan. 11.

While they’re pleased the statue isn’t returning to campus, they say the university’s $2.5 million payment to the North Carolina chapter of the Sons of Confederate Veterans poses a threat to campus safety. Some also argue that it shows that the university sympathizes with white supremacists.

Members of the UNC Campus Safety Commission discussed the settlement and lawsuit against the UNC System Board of Governors at its monthly meeting last week.

“It’s good to get (Silent Sam) off campus, but it’s bad because it sends a message that seems to be university support for these white supremacists and that poses further threats to the safety of the people on campus,” said Larry Grossberg, professor of communication studies and cultural studies. “There are bigger issues here that are not about safety ... but about trust in the administration more broadly.”

Grossberg said faculty members are outraged at the way this settlement was handled, the fact that it was done in secret and announced on the day before Thanksgiving and that it reproduces a solution for a building that was rejected soundly by the university community.

On Nov. 27, the UNC System reached a settlement with the N.C. Sons of Confederate Veterans, though the terms of the agreement had been approved before the lawsuit was filed. The deal turned over ownership of the statue to the Confederate group and offered $2.5 million for the organization to transport and preserve the monument, as well as build a facility to display the statue.

The UNC Board of Governors members who were tasked with finding a solution never held a public meeting to discuss the statue or what options the board was considering. No proposal was publicly presented to the full board or to UNC-Chapel Hill leaders.

Kim Strom-Gottfried, a member of the UNC Campus Safety Commission, said this resolution is at the heart of their mission of rebuilding trust and they should’ve been consulted. She said the settlement preceding the lawsuit, in addition to UNC’s handling of the recent report of federal Clery Act violations and settlement of the anti-Semitism case, is concerning.

“I am very cynical and demoralized about being set forth on a mission when in one month we had three instances that to me seem to put us in a compromised position to meet that mission,” Strom-Gottfried said.

In a letter to Sons of Confederate Veterans members, Kevin Stone, commander of the group, said the negotiations were kept confidential and called the settlement with the UNC System a “major strategic victory” all at the expense of the university. He also said the money would contribute to a new division headquarters.

Frank Baumgartner, a political science professor and chair of the safety commission, said, “There is no disincentive for white supremacist organizations to come to campus when they’re treated this way where we’re going to build them a new headquarters. It’s beyond just giving something away. ... There’s sympathy with the cause of the Sons of Confederate Veterans.”

Strom-Gottfried, a professor in the School of Social Work, said the settlement “emboldens” the group. Charles Streeter, former chair of the UNC-CH Employee Forum and a member of the commission, said it “calls into question our own ethics and integrity as a university.”

While there’s anger over the terms of the settlement and how it was done behind closed doors, some also are questioning the validity of the Sons of Confederate Veterans lawsuit itself.

According to UNC-CH law professor Eric Muller, the lawsuit wouldn’t have stood a chance in court. Muller said the lawsuit relies on the assertion that the N.C. Sons of Confederate Veterans own the rights to the Silent Sam statue, which goes back to the origins of the monument in the early 1900s.

A national civil rights group is also criticizing the deal and filing a motion to intervene in the existing lawsuit between the UNC System and the N.C. Sons of Confederate Veterans.

The former dean of the College of Arts & Sciences and a MacArthur "genius grant" winner replaces Carol Folt, who resigned in January.

The N.C. Sons of Confederate Veterans had reported average annual revenue of only about $59,000 since 2010.

The UNC System will give Silent Sam and a $2.5 million trust fund to the N.C. Sons of Confederate Veterans.

The N.C. Sons of Confederate Veterans will take possession of Silent Sam and get access to a $2.5 million trust fund to take care of it.

Casey Becknell of Lexington waves a Confederate flag in a protester’s face during a clash at the Silent Sam site in 2018.

The pedestal on the UNC-Chapel Hill campus that once held the Confederate monument known as Silent Sam is shown surrounded by two rows of police barricades on Jan. 11.