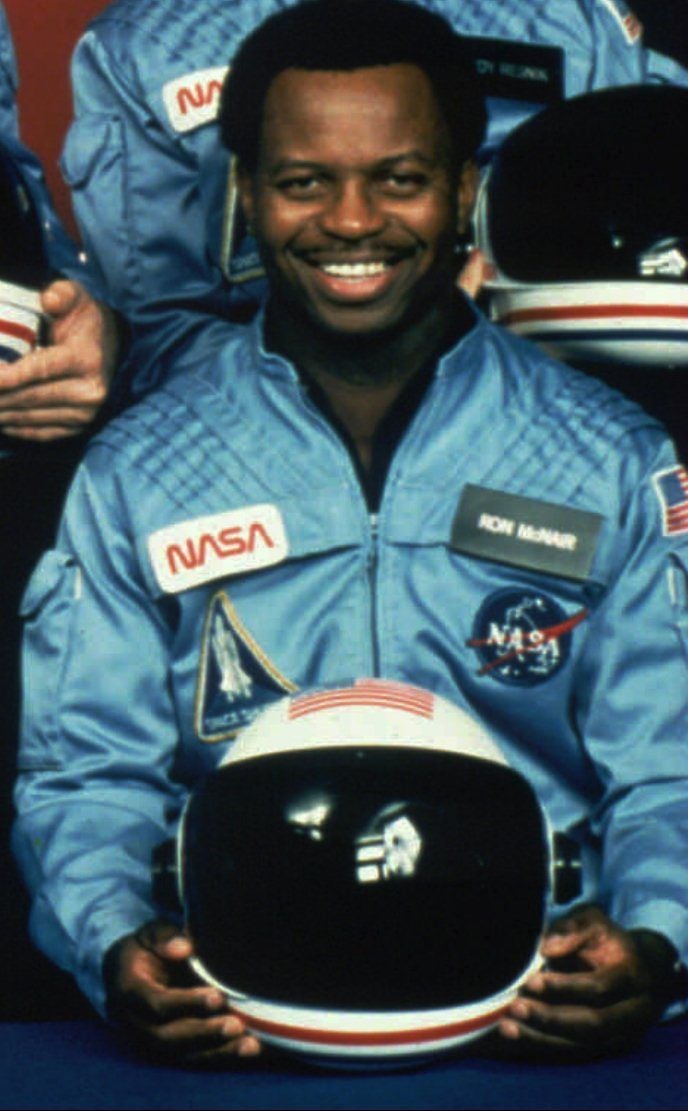 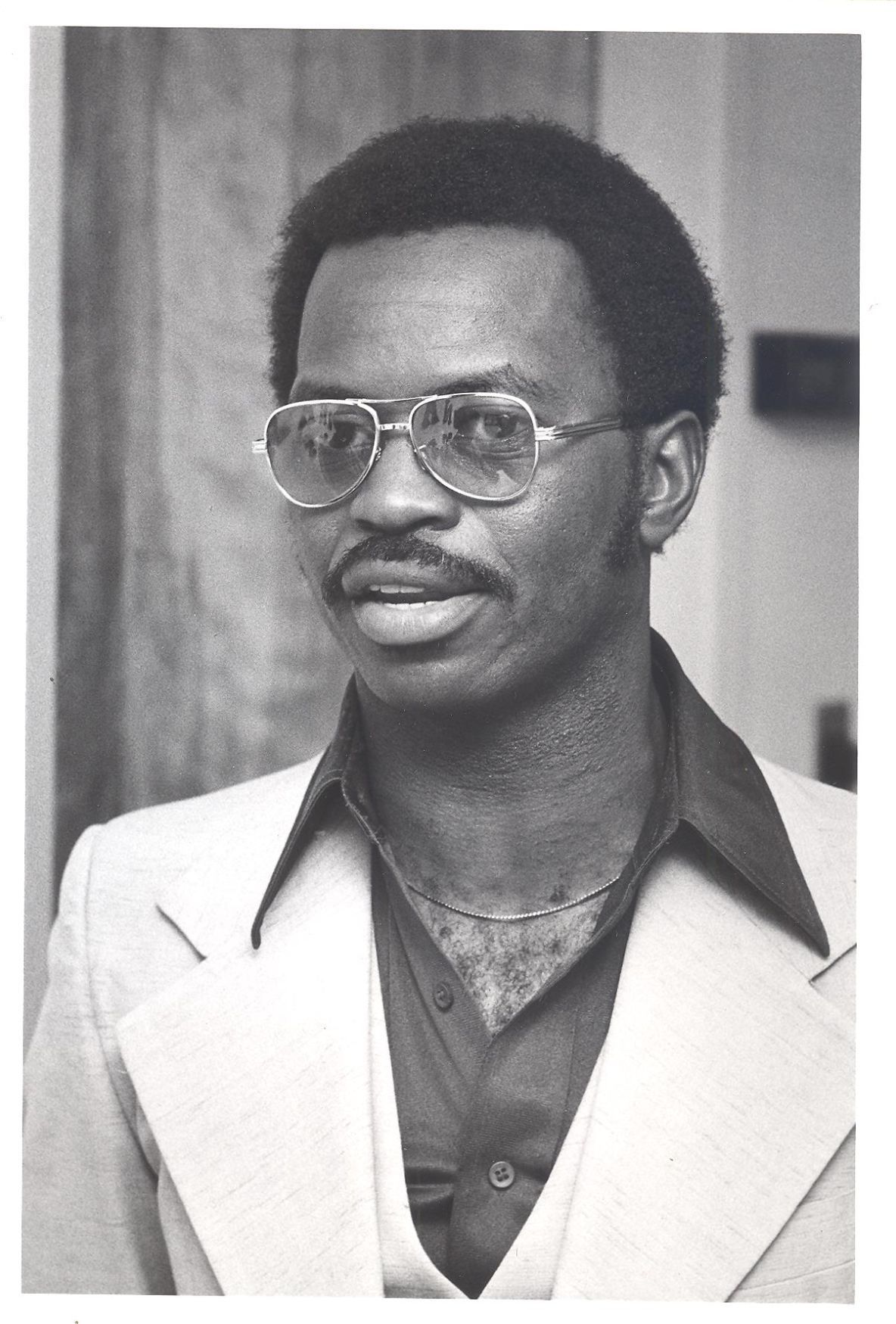 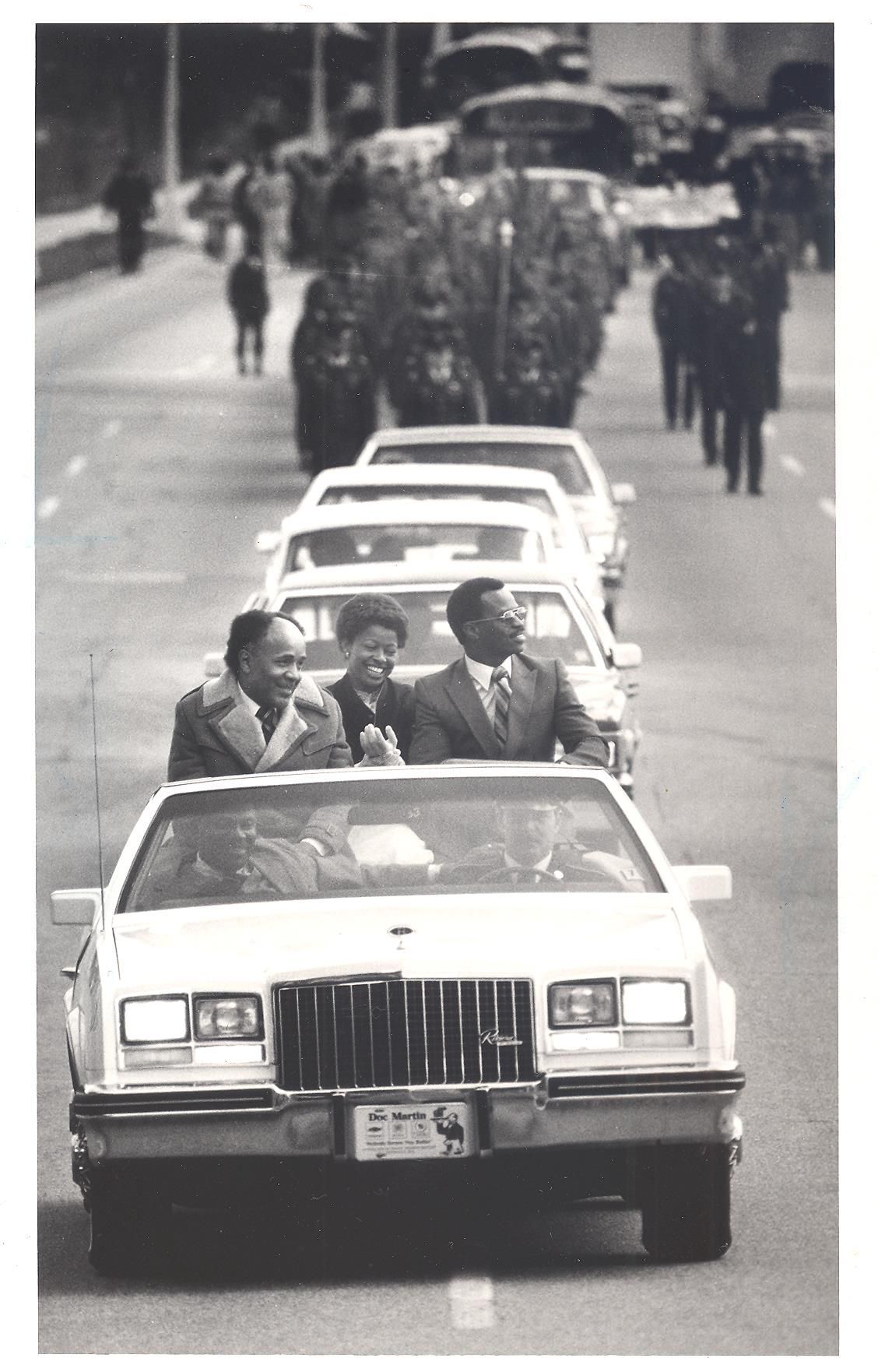 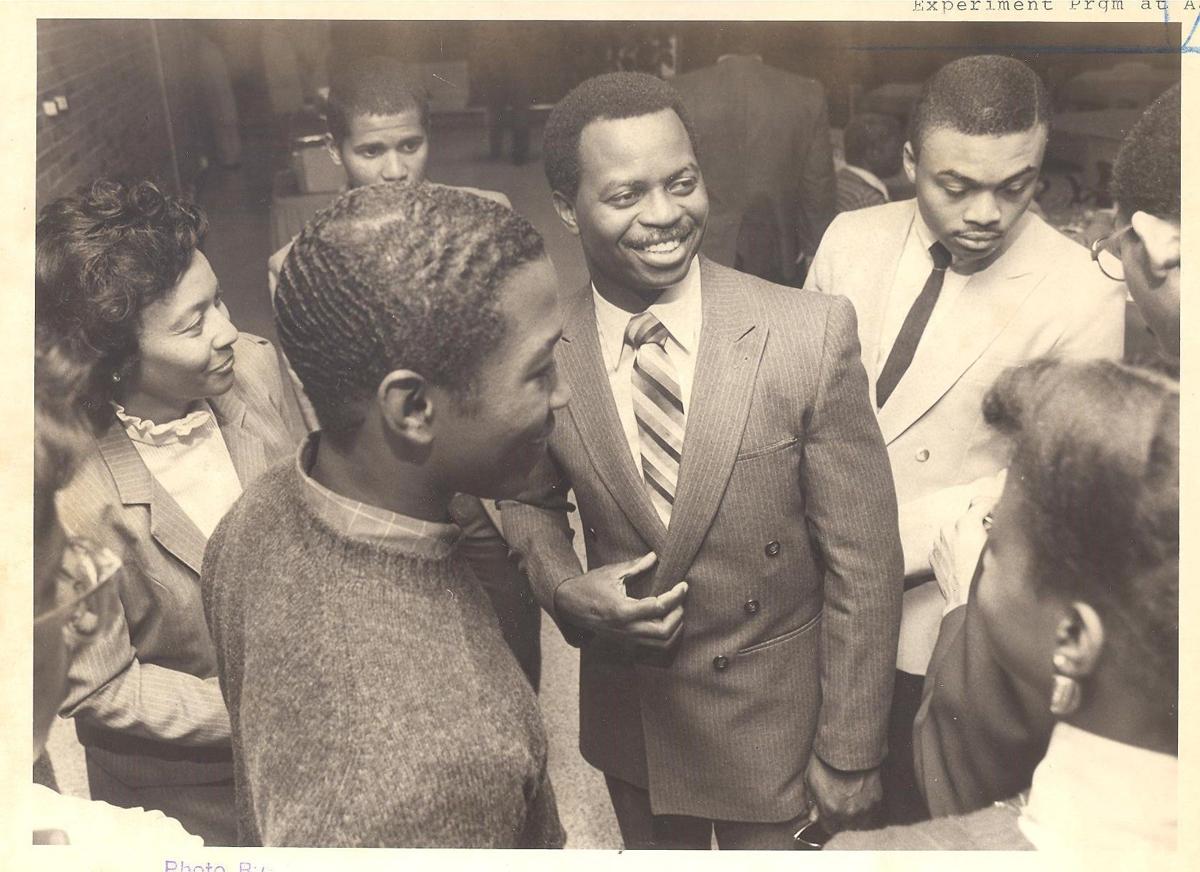 Ronald McNair (center) talks with students in the N.C. A&T space shuttle experiment program on April 13, 1984. McNair graduated as valedictorian of Carver High in Lake City, S.C., and won a South Carolina state scholarship to attend N.C. A&T. The reason he attended A&T? White universities in South Carolina at the time wouldn’t accept a black student who wanted to study physics or engineering. 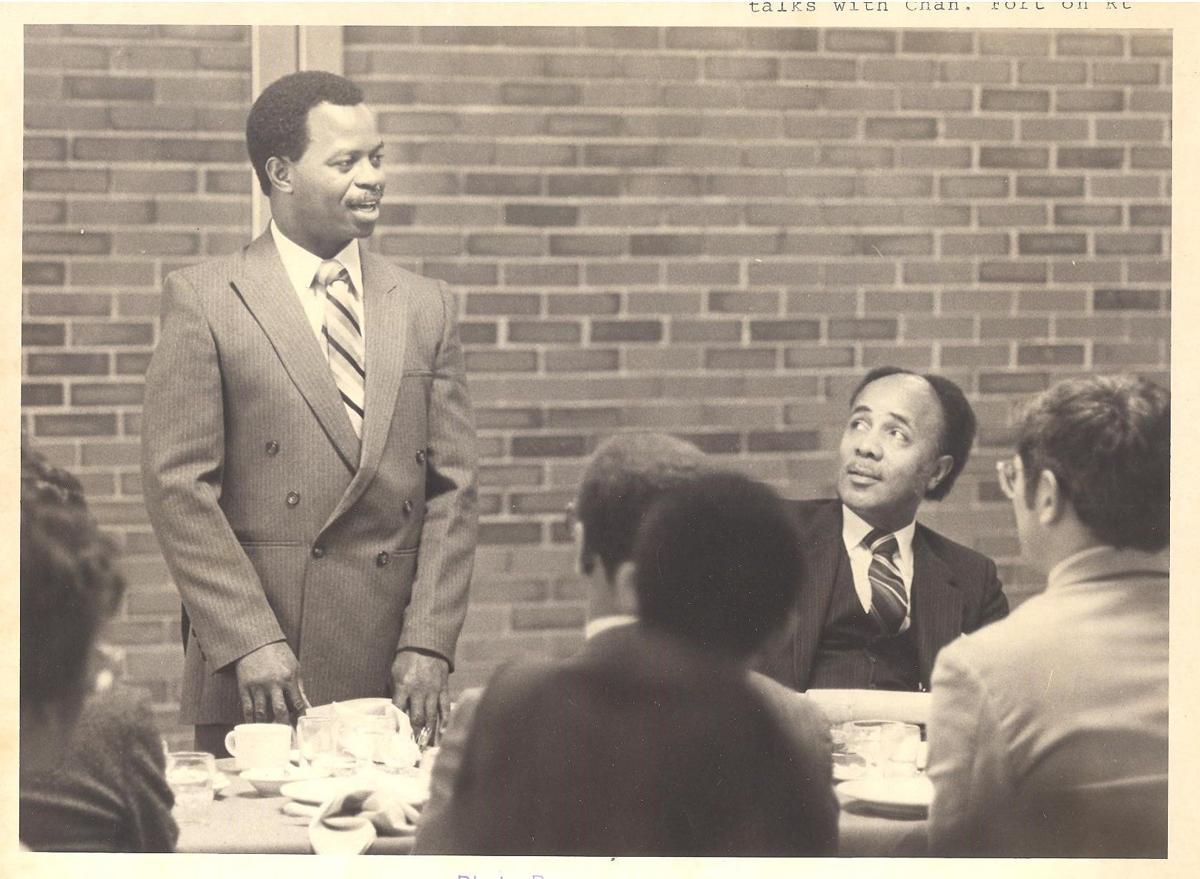 Dr. Ronald McNair speaks during a breakfast for N.C. A&T Space Shuttle Experiment students in this file photo from March 29, 1984. 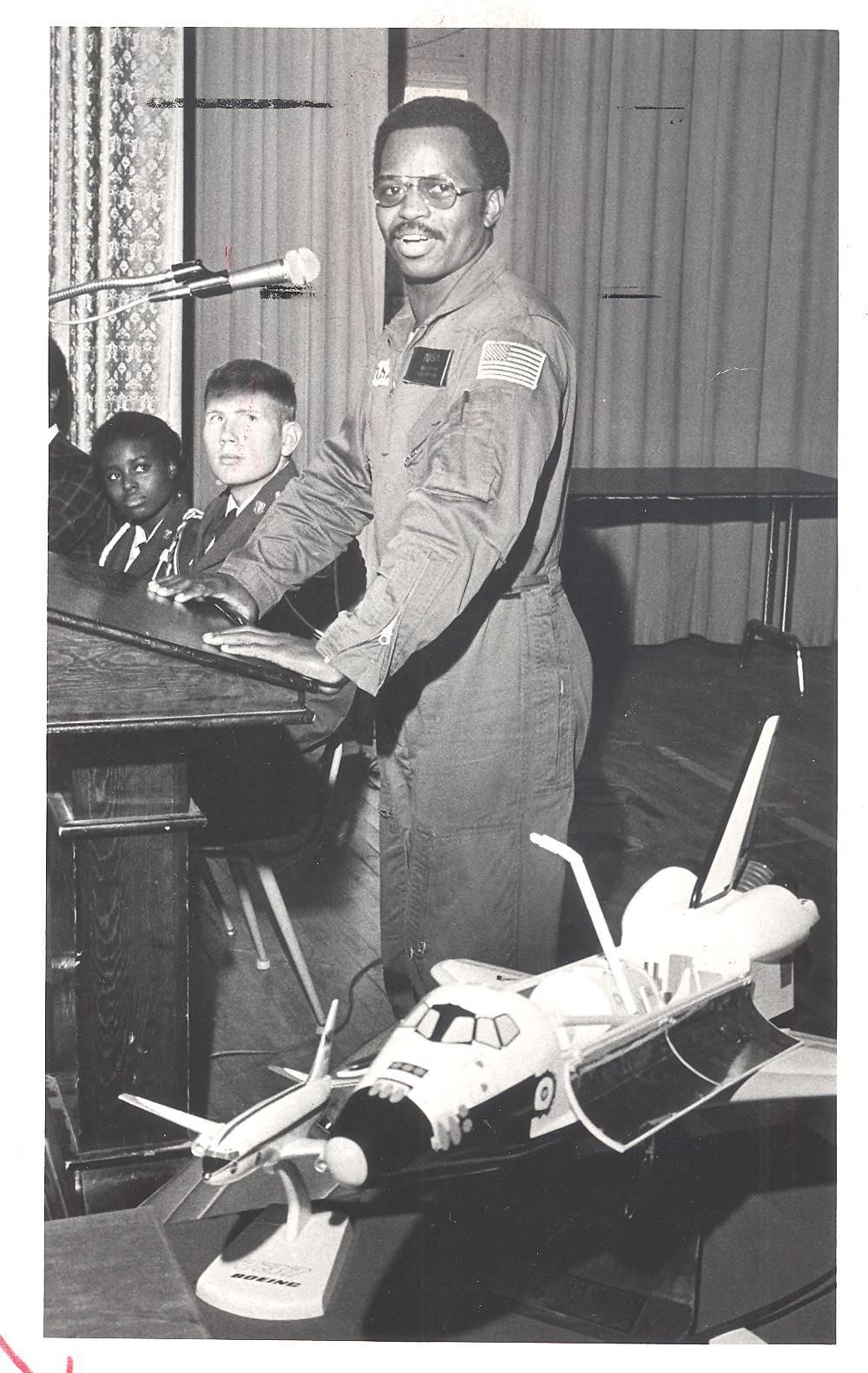 McNair speaks at Dudley High in Greensboro on Nov. 21, 1980. Childhood friends say McNair was obsessed with space and couldn’t stop talking about the Russian launch of the Sputnik satellite when it happened in 1957. 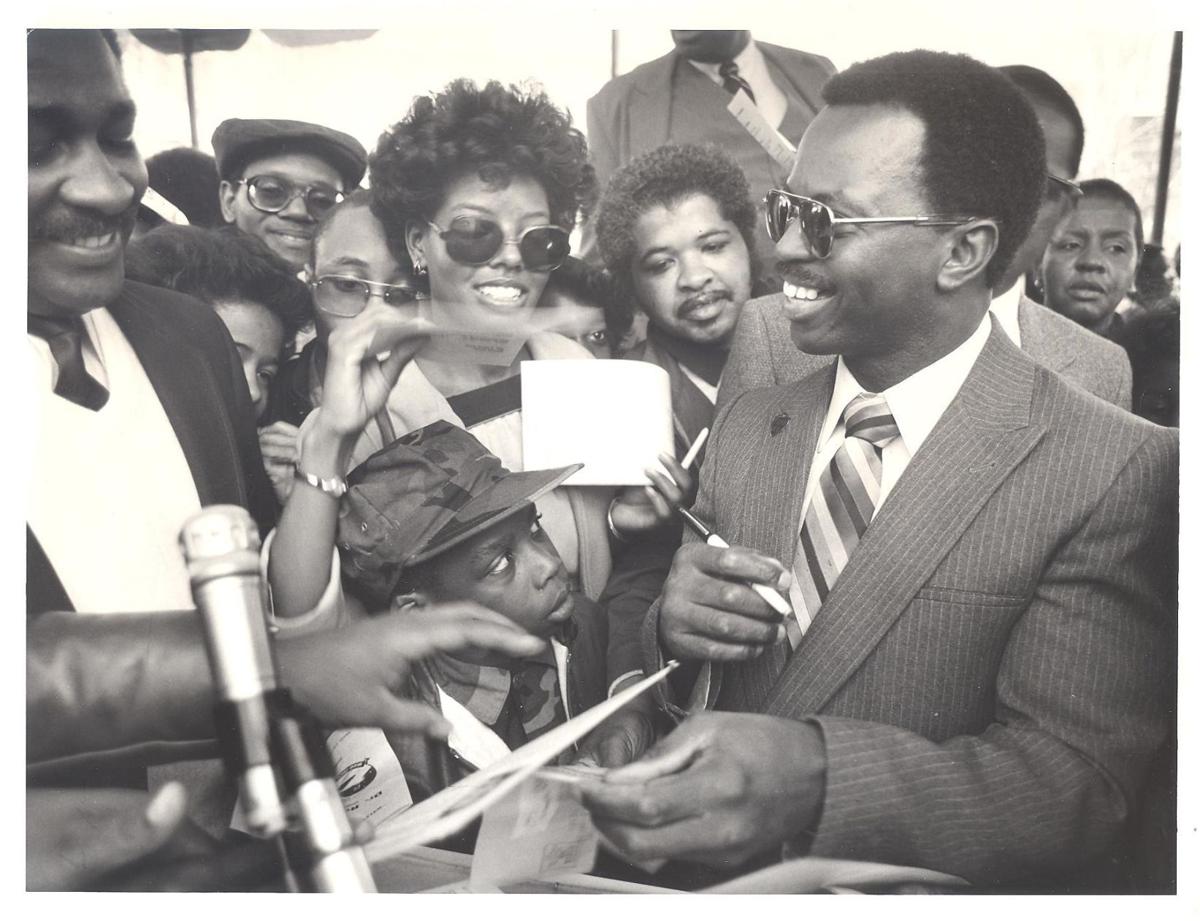 If you have lived in Greensboro for any length of time, you probably know two things about Ronald McNair:

He went to N.C. A&T, and he was one of the seven people killed 30 years ago today when the space shuttle Challenger exploded 9 miles above Florida.

But there’s a lot more to know about McNair. He was a child prodigy. An MIT graduate. A small-town boy. A family man. An astronaut who loved karate and lasers and playing the saxophone.

Here are 30 things you should know about McNair on the 30th anniversary of his death.

1. Ronald E. McNair was a South Carolina native. He was born Oct. 21, 1950, in Lake City, a town of about 6,700 people now and about 80 miles east of Columbia. His father, Carl, repaired automobile bodies; his mother, Pearl, taught school.

2. Friends remember McNair as the smartest kid in Lake City. He could read at age 3, started second grade at age 5 and carried a slide rule instead of an Afro comb. His friends nicknamed him “Gizmo” because he loved science so much.

3. McNair was obsessed with space. A childhood friend told Ebony magazine in 1986: “That’s all Ronald talked about — Sputnik, Sputnik, Sputnik. We got tired of hearing it.”

4. When McNair was 9, he decided he wanted to check out some books from the whites-only library in Lake City. The librarian called the police. The officer suggested that the librarian let young Ron borrow the books. The librarian relented when Pearl McNair promised that her son would take care of them.

5. McNair graduated as valedictorian of Carver High School in Lake City and won a South Carolina state scholarship to attend N.C. A&T. The reason he attended A&T? White universities in South Carolina at the time wouldn’t accept a black student who wanted to study physics or engineering.

6. McNair graduated from A&T with honors in 1971. Though A&T later named its engineering building after McNair, he actually majored in physics.

7. One of McNair’s college passions was karate. He was a fifth-degree black belt who won multiple tournaments and, ultimately, an AAU gold medal. The 1971 Ayantee yearbook lists him as the head instructor on A&T’s karate team.

8. McNair fretted about pursuing his doctorate at MIT, one of the world’s top universities. An Ebony magazine article written after his death quoted his thoughts on MIT: “They used to say that even the janitors at MIT had master’s degrees. At first I wasn’t going but then I couldn’t run away from a challenge. I had to compete with the best.”

9. McNair had every right to be nervous. As he was finishing his doctoral thesis in physics, someone stole his backpack that contained two years worth of data. He returned to the lab, redid his experiments and graduated on time — and with honors — in 1977.

10. The title of his doctoral thesis was “Energy Absorption and Vibrational Heating in Molecules Following Intense Laser Excitation.”

11. McNair’s first job out of college was as a staff physicist at the Hughes Research Laboratories in Malibu, Calif. He worked with lasers.

13. McNair was the second African American to go into space. In February 1984, he was a mission specialist on STS 41-B, which was the fourth flight of the space shuttle Challenger and NASA’s 10th space shuttle mission. One of his jobs was to operate the shuttle’s robot arm.

15. Lots of things didn’t go quite right on McNair’s first space voyage. Two satellites went into lower-than-expected orbit and had to be fetched from space by a later shuttle mission. The first-ever refurbished satellite to be deployed from a shuttle had an electrical problem and never left Challenger’s cargo bay.

16. McNair and the four other crew members logged 191 hours in space on the eight-day mission. Challenger made 128 orbits of the Earth on that trip.

17. Another of McNair’s passions was playing the saxophone. He brought his instrument on the mission and played it while in orbit.

18. Speaking of the saxophone, McNair almost majored in music at A&T because he was intimidated by the other physics students from big-city high schools. But he changed his mind when an A&T guidance counselor told him she thought he was good enough to major in physics.

19. In 1984, after McNair returned from his first trip into space, Greensboro awarded him a key to the city. Lake City renamed U.S. 52, one of the main roads in town, “Ron McNair Boulevard.”

20. Also in 1984, McNair spoke at a University of South Carolina commencement. He said: “The true courage of space flight is not strapping into one’s seat prior to liftoff. It is not sitting aboard 6 million pounds of fire and thunder as one rockets … away from the planet. The true courage comes in enduring … and persevering, the preparation, and believing in oneself.”

21. Fellow astronaut Charlie Bolden — now NASA’s top administrator — said this to Ebony magazine in 1986: “I don’t think any one person could have kept up with Ron to know all the things that he was into. He was absolutely phenomenal. I know he slept, but I’m not sure when. He never had a normal time that was day or night. Ron did things until they were finished, and if that meant going past midnight, then he did.”

22. McNair’s next trip into space was scheduled for Jan. 22, 1986. McNair, again a mission specialist, was one of six astronauts on board the Challenger. The seventh crew member was Christa McAuliffe, a high school teacher from Concord, N.H, who was to be the first teacher in space.

23. The mission, known to NASA as STS-51-L, was scheduled to last seven days. The astronauts would deploy a communications satellite, launch and retrieve a device used to measure Halley’s comet and conduct scientific experiments. McAuliffe would teach two lessons from space.

24. After six days of delays, Challenger took off from Kennedy Space Center on Jan. 28, a chilly Tuesday. A seal in a rocket booster failed, and the shuttle exploded 73 seconds after it took off. All seven crew members were killed. They were the first fatalities in 25 shuttle missions. McNair was 35.

25. He is survived by his wife, Cheryl, a former teacher from New York City who now lives in Houston. After her husband’s death, she helped found the Challenger Center for Space Science Education in Washington. Their son Reginald works in finance in the Atlanta area. Their daughter Joy is an attorney in the Houston area.

26. Numerous schools and parks across the country bear McNair’s name. They include the main engineering building at A&T and an elementary school in Greensboro. The McNair Building at MIT is home to the university’s Space Systems Laboratory. Lake City renamed its middle school Ronald E. McNair Junior High School. The school is in the old Carver High School building that McNair attended.

28. A&T honors McNair each year on the anniversary of his death with a symposium that attracts McNair Scholars from around the nation. At last year’s event, 56 students from as far away as California presented their research.

29. Remember the old Lake City library where a police officer helped a 9-year-old Ronald McNair check out a book? It’s now a museum and community space dedicated to McNair’s life. The Dr. Ronald E. McNair Life History Center opened in 2011 on the 25th anniversary of the Challenger disaster.

30. McNair is buried in his hometown at the Ronald E. McNair Memorial Park, which sits next to the old library.

For more information about Ronald McNair and the Space Shuttle Challenger, visit these links:

Presidential Commission report on the Challenger disaster (aka the Rogers report): Click here

The annual commemoration will be Friday on campus.

The program will give $5,000 stipends to 25 first-generation and minority students who want to attend graduate school.

MIT dedicated Building 37, home to the Center for Space Research, and part of the aeronautics and astronautics department, on Dec. 5, 1986.

Ronald McNair (center) talks with students in the N.C. A&T space shuttle experiment program on April 13, 1984. McNair graduated as valedictorian of Carver High in Lake City, S.C., and won a South Carolina state scholarship to attend N.C. A&T. The reason he attended A&T? White universities in South Carolina at the time wouldn’t accept a black student who wanted to study physics or engineering.

Dr. Ronald McNair speaks during a breakfast for N.C. A&T Space Shuttle Experiment students in this file photo from March 29, 1984.

McNair speaks at Dudley High in Greensboro on Nov. 21, 1980. Childhood friends say McNair was obsessed with space and couldn’t stop talking about the Russian launch of the Sputnik satellite when it happened in 1957.