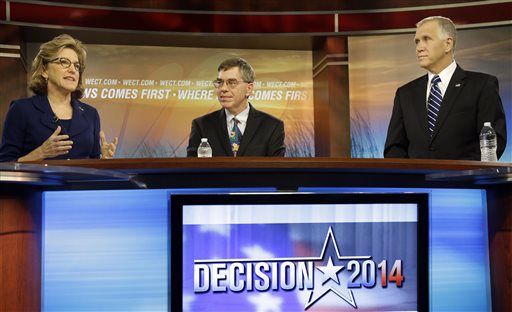 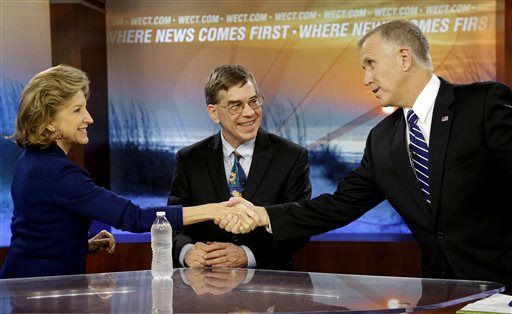 It was Libertarian Sean Haugh’s first — and probably only — chance to stand shoulder to shoulder with the other U.S. Senate hopefuls.

And he didn’t blow it, political observers said.

It was the only televised debate Haugh has been invited to participate in with his opponents. It didn’t air in the Triad, like the previous two debates that featured only Tillis and Hagan.

The exposure alone could be enough to give Haugh a bump in the polls or help him earn more votes in November, experts said.

“Inclusion in a debate, albeit one likely to have lower viewership than the first two debates, gives Haugh at least a chance to inch somewhat above the traditional 2 percent ceiling for North Carolina Libertarian candidates,” said John Dinan, a politics professor at Wake Forest University.

Haugh started the night with his trademark “Howdy.”

“He was who he is,” said Michael Bitzer, a political science professor at Catawba College. “And when you are comfortable enough in your own skin, that is something that comes across as, I think, genuineness.”

Haugh stressed his abhorrence for war and his desire to shrink the size of the federal government.

“That is wealth that is taken out of our pockets,” Haugh said.

Haugh, who works as a pizza delivery man, cited one of his co-workers who pointed out that if the minimum wage is increased, the cost of consumer goods will increase, too.

“We can’t find a place to set the minimum wage that is really going to help people unless we address the main problem, which is our money doesn’t go as far as it used to,” Haugh said.

Haugh said the market should set the minimum wage.

Hagan and Tillis repeated a steady stream of campaign rhetoric during the debate. They mostly ignored Haugh, who was standing between them on the stage.

Tillis and Hagan are in a pitched battle for the seat, with the incumbent holding only a slight lead in recent polls.

Haugh’s poll numbers — which topped at about 7 percent — have dwindled as Election Day gets nearer. But even 1 or 2 percent could tip the outcome.

But Haugh may appeal to voters on both ends of the political spectrum.

Haugh agreed with Hagan on issues such as same-sex marriage. Both think the government shouldn’t be able to tell you who you can marry. Tillis has hired lawyers to defend the state’s constitutional ban on gay marriage.

Haugh agreed with Tillis on other issues.

“Haugh was just as eager in the debate to tout his anti-war and pro same-sex marriage credentials and thus appeal to Hagan’s base as to call for limiting the size and scope of the federal government in a way that appeals to Tillis supporters,” Dinan said.

Haugh delivered one of the only zingers of the night, in response to Tillis mistakenly saying that Hagan went to Washington to become part of the Republican establishment. Tillis meant Democratic establishment.

“Sometimes I get the Democrats and the Republicans confused, too,” Haugh said. “It’s easy to do.”

Same-sex couples flock to get married after a judge dismissed Amendment One.

Inside Scoop is up to its eyeballs in poll data this week.

Inside Scoop: Here's your chance to check out the Libertarian candidate for U.S. Senate

I hope you don't have a date with Family Feud tonight, because the best thing to watch during the 7 o'clock hour is going to be the N.C. Senat…

John Hammer, the editor and chief scribe and reality bender at The Rhino Times, is out today with a new screed that blames soft-headed women f…

Debate post-op: What was Hagan doing when she missed those committee meetings?

The High Point University Poll has been surveying North Carolinians on political and social issues since 2010. But this year, as a battle for …