JULY 2, 1935 - AUGUST 3, 2020 Edward Lee McAdoo was born on July 2, 1935 to the late Lura Bell McAdoo and Willie Pleasant. He was the second oldest of three siblings and a native to Greensboro, North Carolina. Edward Lee McAdoo departed this life on August 3, 2020 at his home in Greensboro, NC. Edward was a member of Bass Chapel United Methodist Church in Greensboro, NC, for over 70 years. While attending Bass Chapel, he served as an usher and the Director of Traffic for Revival and Funeral Services. He was always willing to lend a helping hand at the church wherever or whenever there was a need. Edward is an alum of James B Dudley High School class of 1952. He was the alumni president of his 1952 high school class. Edward also served as a Semper Fi Marine for two years. After leaving the Marines, Edward returned home. He attended North Carolina Agricultural and Technical State University where he earned his undergraduate degree in Political Science and a Master degree in Counseling. Edward worked for Foster Caviness and the United States Postal Service for many years. Edward also worked for Guilford County School Transportation for eleven years. Edward was a very well respected member of the community and was known by many as "Big Ed or Big Mac." He received an unsung hero NAACP award for taking part in the nonviolent sit-in at F.W Woolworth in 1960. Edward was a great leader and an excellent mentor to many, especially to his grandchildren and great-grandchildren. He believed in fighting for what was right and never backing down from injustices. He made his mark in this world through his work and through his legacy. Edward Lee McAdoo is survived by his wife of many years, Georgia J. McAdoo and children Newton Bruce McAdoo (Ute Holch-McAdoo), Leola Yvette McAdoo (deceased), Angela Lamar McAdoo, Edward Lee McAdoo Jr., Lura Odette McAdoo Johnson (Sam Johnson), Wendell McAdoo (Angie McAdoo) and Terri Akins; grandchildren Tara Moore, Latoya McAdoo, Jamyla Willer, Dwight McAdoo, Jamaine McAdoo, Elliott McAdoo, Nicholas McAdoo, Trey McAdoo, Darren Neal, and Jamal McAdoo; and Great-Grandchildren Tyrek McAdoo, Tyron McAdoo, Tyrell McAdoo, King Robinson, Prince Edward Robinson, Saint Robinson, Kaylee McAdoo, Tranise McAdoo, Lydia Moore, Zion Moore, Drayden Neal, and a host of other relatives and friends. Public viewing of Mr. McAdoo is 12 noon - 5:00 pm Monday at Hargett Funeral Service 905 E. Market St Greensboro, NC A family graveside service is 11:00 Tuesday August 11, 2020 at Bass Chapel U.M.C. Cemetery 5075 Bass Chapel Road Greensboro, NC Live streaming of the service is available. Hargett Funeral Service, Inc. 905 E. Market Street 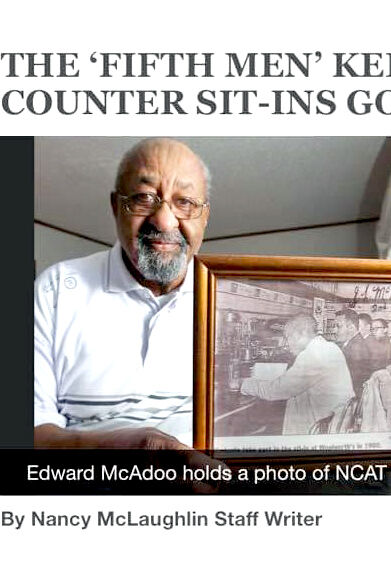