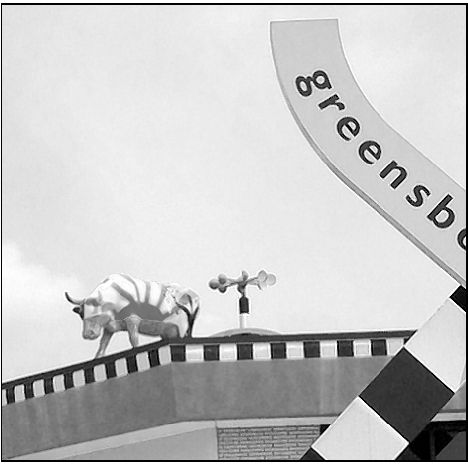 Night-N-Day at the Greensboro Children's Museum.

I love Greensboro, and my blog, Around Town, celebrates Greensboro life. Here are a few recent entries:

I don't know if you've noticed, but there's a cow on the roof.

The roof of the Greensboro Children's Museum, that it.

It's a lovely cow, painted in bright shades of yellow, orange and blue. The yellow and orange form a sunrise, and what appears to be a tree is growing up its flank.

Is it a refugee from a CowParade?

One of the largest public art events in the world, CowParade has been staged in 79 cities worldwide since 1999. Artists are challenged to put their mark on one of three standard cow sculptures — standing, grazing, reclining

— adding paint and other embellishments.

The cows are then placed around the host city and auctioned for charity at the end of the show.

I can't remember exactly when I discovered the CowParade shows, but the cows always made me laugh. I'm a CowParade freak.

My family and friends started giving me CowParade figurines as gifts. I have the whole "Wizard of Oz" gang — including the Wicked Witch of the West

— and Christopher Cowlumbus, who has a ship on his back.

Althea Hall of the Greensboro Children's Museum says this one, called Night-N-Day, designed by artist Helen Seebold, is from the CowParade NC 2012 collection. Night-N-Day is only on loan, so enjoy it while you can.

Hall encourages visitors to snap a selfie with the cow in the background and post it with the #GCM hashtag.

That show took place in the Triangle, but I think the Triad should do one of

its own. Nothing would make me happier than to see more of them popping up around town.

Catch the last of Shark Week activities today and Saturday at the Carolina SciQuarium.

The Carolina SciQuarium at the Greensboro Science Center teamed up with Time Warner Cable and the Discovery Channel for an Sneak Peek of Shark Week.

Last week, Science Center members got to preview the film "Jaws Strikes Back," which aired this week as part of Discovery's Shark Week, which continues through Saturday.

The Greensboro Science Center has featured shark-themed events and activities every day this week, such as myths and facts about sharks, shark conservation, and ancient sharks.

There's a program today on Extreme Sharks and one Saturday on shark teeth and jaws.

Read more of the Around Town blog at www.news-record.com/blogs/around town.

Less than 1% of abortions take place in the third trimester. Here’s why people get them

The reasons why people may seek out late-term abortions are complex and are often based on new medical information and delays caused by state policies.

Greensboro's Roy Carroll on racing team at Le Mans: 'I believe in going to win'

GREENSBORO — Macy’s never put out a display like this one.

Dark for two long years, Triad Stage's 20th season will be as a 'stronger theater'

The regional professional theater, located downtown at 232 S. Elm St. will announce its 20th season of live, in-person performances at an event at 6 p.m. June 4.

Guilford voters say 'Yes' to $1.7B in school construction bonds, but no to sales tax to pay for the work

Voters supported the school bond referendum by a large margin, with 61% voting in favor and about 39% voting against it, according to complete but unofficial results. But they rejected a sales tax increase the county planned to use to pay for the debt.

Officers arrested Richard Gene Martin of Greensboro on May 10, police said in a news release. An investigation led to charges of statutory sex offense with a minor, indecent liberties with a student, contributing to the delinquency of a minor and felony possession of marijuana.

The mayor serves a four-year term and receives an annual salary of $30,932.

The celebration of the university's most recent graduates began early today with a commencement ceremony at the Greensboro Coliseum.

Former President Trump to speak in Greensboro on July 15

Ticket prices range from $9 for a spot in an overflow room to $3,995 or more for seating closer to the stage.

Night-N-Day at the Greensboro Children's Museum.