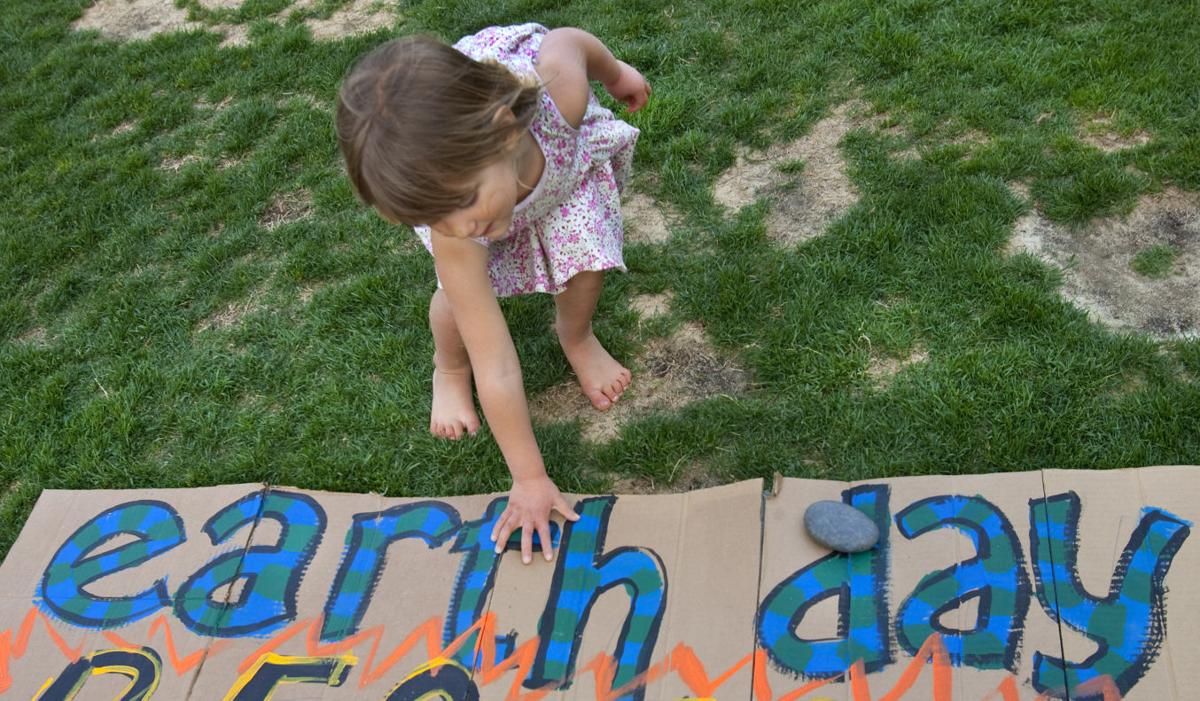 Britten Froggatt touches a drawing as people celebrate the 40th anniversary of Earth Day at Center City Park in Greensboro in 2010.

A bull dozer clears sand and debris from Hwy. 12 south of Avon on Aug. 28, 2011.The town of Avon on the Outer Banks needs $11 million to protect a road threatened by sea level rise. High winds from hurricanes and flooding affect much of the Outer Banks.

Fossil fuels — coal, petroleum and natural gas — have given us a comfortable quality of life. They heat and cool our homes, cook our food, manufacture and transport the goods we buy, and transport us to work, to see family, to shop, to vacation and to go to just about every other place we visit. There is no denying that fossil fuels have made our lives better, but there’s a cost.

One of those costs was the January 1969 oil spill off Santa Barbara, Calif., which killed sea birds and marine mammals such as dolphins and elephant seals and fouled more than 30 miles of coastline. That oil spill spurred Wisconsin Sen. Gaylord Nelson to organize the first Earth Day on April 22, 1970, which led to the creation of the Environmental Protection Agency and passage of the Clean Air and Clean Water acts. Thanks to actions taken in response to that disastrous oil spill, the air got cleaner, our waterways got cleaner, and no American rivers have caught fire since the River Rouge and the Cuyahoga River burned in 1969.

Things got better, but we keep incurring costs for using fossil fuels. Some are easy to see, like the Exxon Valdez and BP Deepwater Horizon oil spills, or the Duke Energy coal ash spill into the Dan River, but some are less visible and don’t make the front page of the newspaper or the nightly news.

One cost that is hard to see is damage to our health. In addition to carbon dioxide, which is changing our climate, burning fossil fuels also emits particles that damage our bodies. Several medical studies published in the past couple of years have linked fossil fuel pollution to poor health. One study reported that in 2018, fossil fuel pollution was linked to 8.7 million deaths globally — almost one in five of all deaths that year. Another study found that people with COVID-19 who live in areas with high levels of air pollution are more likely to die from the disease than people who live in less polluted areas. And another study found that exposure to air pollution increases the risk of stillbirths and premature births. That same study also found that higher temperatures lead to more stillbirths, premature births and lower birth weights. Low-income people and people of color are more likely to live near pollution sources or in urban heat islands and to suffer these negative health effects.

Climate change is a cost that is becoming more visible. Storms are stronger and more frequent. Flooding is worse. Wildfires are worse. Rising seas threaten the coast. Miami Beach spent more than $400 million to raise streets and install pumps to deal with flooding during high tide, a problem that did not exist a few years ago. The tiny town of Avon on the Outer Banks of North Carolina needs $11 million to protect a road threatened by sea level rise. Many more coastal communities will need millions, if not billions of dollars, to fend off the sea. How many teachers could be hired, or children could be fed, with that money?

Thankfully, we have alternatives to power our economy. It is now cheaper to produce energy from clean renewable sources, like solar and wind, than from fossil fuels. Transitioning to clean energy will reduce climate-disrupting greenhouse gas emissions as well as other health damaging air pollution. This transition to clean energy also provides a tremendous economic opportunity. According to Bank of America, the clean energy market could double from around $1 trillion (that’s $1,000 billion) to $2 trillion in the next five years. We can clean the air, improve health, tackle climate change and create jobs, but we need Congress to help by putting a price on carbon. The money collected can be paid back to families as a dividend, which will increase the purchasing power of low- and middle-income households.

You may be wondering who, besides environmental activists, wants Congress to put a price on carbon? The answer is lots of conservative business groups like the Commodity Futures Trading Commission, the Business Roundtable and the CEO Climate Dialogue — whose members include Ford, Dominion Energy and Unilever, and more than 150 North Carolina businesses.

So, if you are looking for a way to celebrate Earth Day this year, follow the example of these business groups and call or email Sens. Richard Burr and Thom Tillis and tell them to support carbon pricing legislation. We might all breathe easier when they do.

Bill Blancato lives in Winston-Salem and is a regional coordinator for Citizens’ Climate Lobby.

Madison A. Fields: 'I do not accept this portrait' at Elon Law

In the spring of 2020, my colleagues and I did something that Elon, along with most other higher education institutions, failed to: We asked B…

Leonard Pitts Jr.: Times these days when you simply must close your mind

Thirty years ago, when I was still a music critic, I received a letter from a lady who informed me in no uncertain terms that I didn’t know wh…

Bottom Line: Will the vilification of Jim Melvin never end?

Regarding the May 2 column in Sunday’s News & Record by Elon law student Madison Fields (“’I do not accept this portrait’ at Elon Law”):

John Hood recently wrote (“No, inequality isn’t increasing,” April 4) that the gap between wealthiest and poorest is not widening when one tak…

Allen Johnson: One of the hardest lessons COVID taught me was a surprise

Joseph Turow: Shhhh, they're listening – inside the coming voice-profiling revolution

Companies could soon tailor what they try to sell you based on the mood conveyed by the sound of your voice.

An open letter to the children.

Jacob M. Appel: Want to end the pandemic? Pay people to get vaccinated

When I received my first dose of Pfizer’s COVID-19 vaccine last December, nobody paid me to roll up my sleeve. Yet, as vaccination efforts app…

Britten Froggatt touches a drawing as people celebrate the 40th anniversary of Earth Day at Center City Park in Greensboro in 2010.

A bull dozer clears sand and debris from Hwy. 12 south of Avon on Aug. 28, 2011.The town of Avon on the Outer Banks needs $11 million to protect a road threatened by sea level rise. High winds from hurricanes and flooding affect much of the Outer Banks.