Fifth-graders wearing face masks are seated apart during a music class May 18 at Milton Elementary School in Rye, N.Y. “The science suggests masking can be extremely effective, particularly for those who can’t get vaccinated while COVID-19 is still circulating,” Kenecia Obie Zimmerman, professor of pediatrics at Duke University School of Medicine, said.

Jenea Edwards helps her son Elijah, 9, in the third grade, with his mask before heading into Manchester Academic Charter School on the first day of in-person learning via a hybrid schedule March 29 in Pittsburgh. 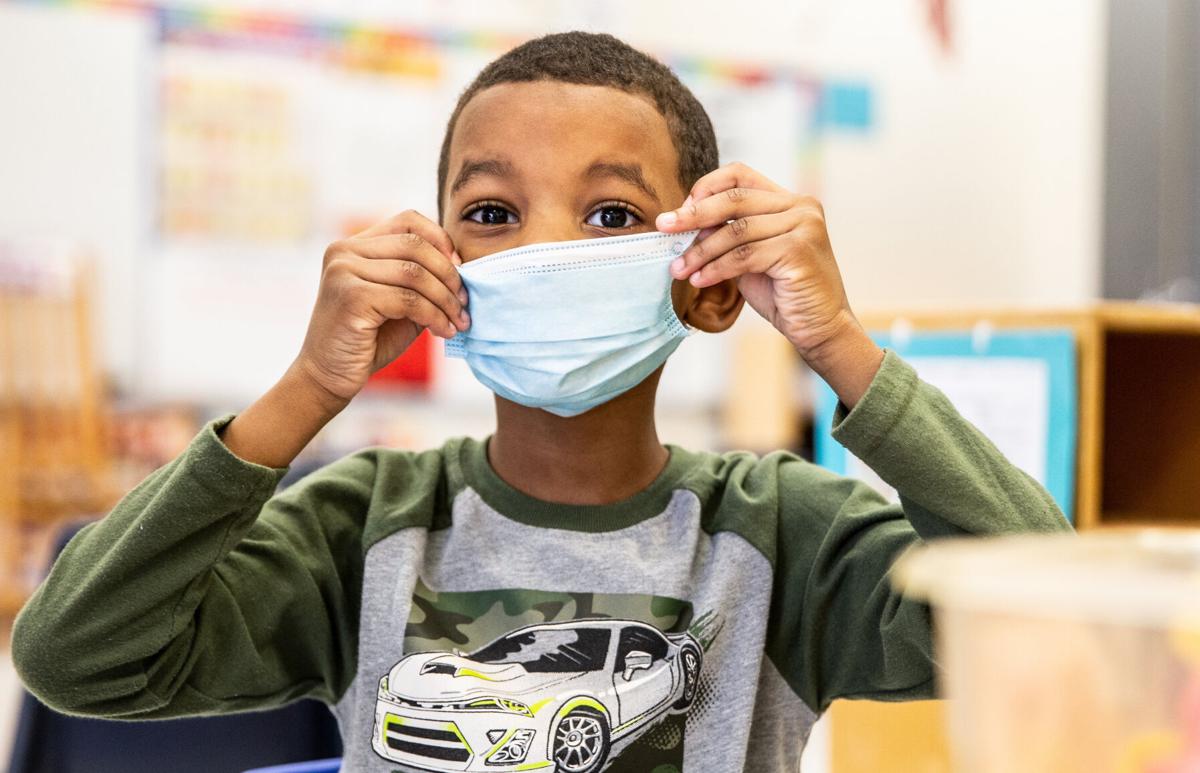 Mohamed Eltayeb adjusts his mask during the first day of pre-K Sept. 29, 2020, at Jefferson Elementary School in Greensboro. 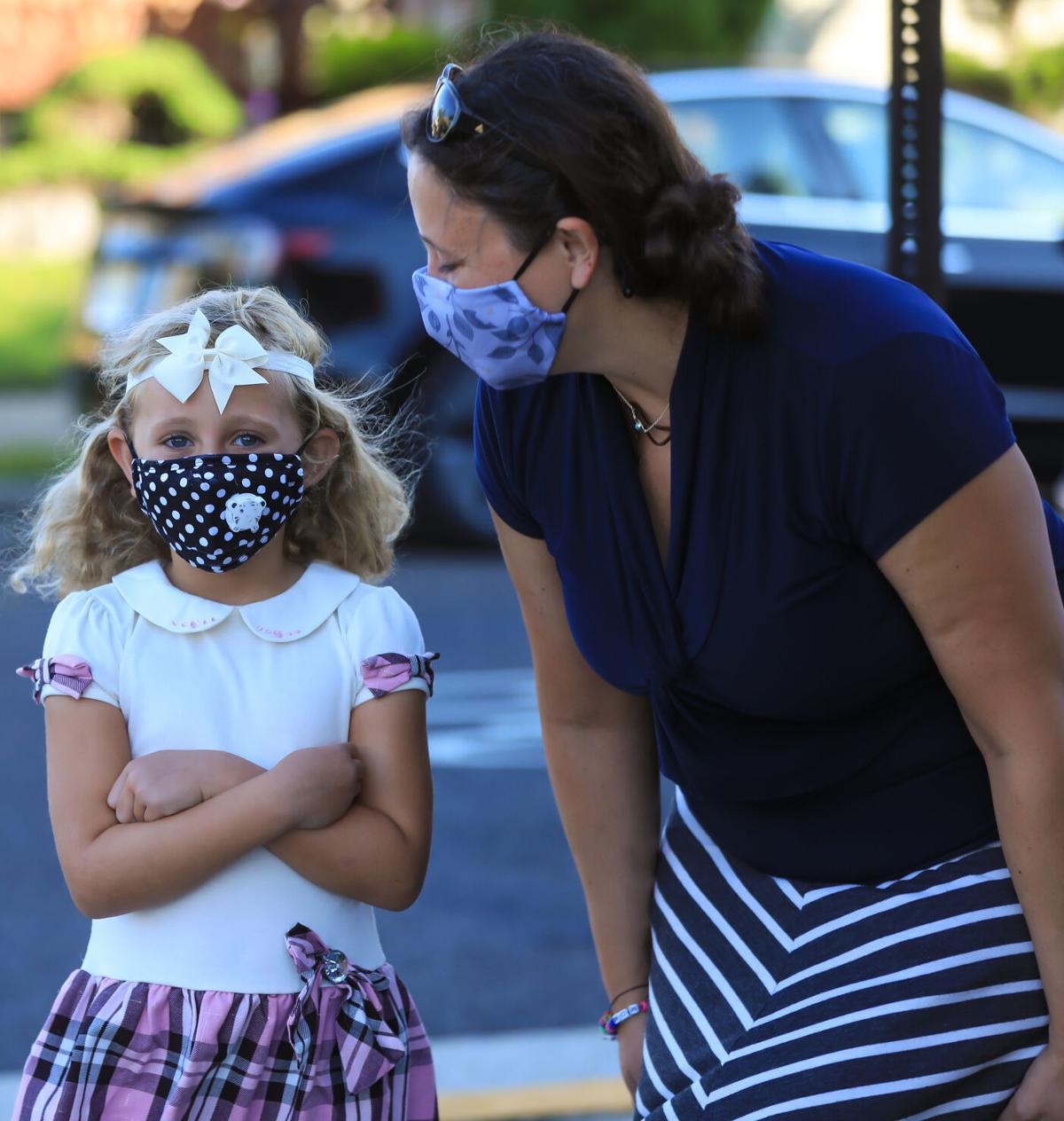 Masks and safety precautions were in effect due to the coronavirus as parents drop off students for the first day of school Sept. 3, 2020, at William H. Ross in Margate, N.J.

At 8 a.m. sharp, Laura Farnan, a parent in Chapel Hill of one rising first-grader and one middle school student, is all set. She sits beside her younger boy to make sure his eyes are on the iPad in front of him when his teacher begins the morning classes. Across the table, Farnan is relieved to see her older daughter making progress on school assignments without much adult monitoring.

This had been Farnan’s routine for much of the pandemic.

After more than one year of virtual learning, North Carolina children and parents had a multitude of experiences. Some families found it rewarding. Others were more than eager to get their children back to in-person classes.

“I’m happy that we have options and could be safe,” Farnan said. “They are old enough to understand why they are home because I know that some kids really wanted to go back to school.”

One North Carolina researcher, Cassandra Davis, assistant professor of public policy at UNC-Chapel Hill, explored many issues related to homeschooling during the pandemic. She discovered that parents with children who struggled with distance learning experienced elevated levels of mental distress.

“I would absolutely imagine those who did day care that switched to virtual,” said Davis, also a parent of a preschool child.

Farnan and her children were able to find creative ways to supplement their lack of social interaction. For example, her daughter connected with her classmates after school by playing video games while talking on the phone with them.

“They understand that this is for their own, and our, health and safety,” Farnan said. “As soon as they are fully vaccinated, they can go and meet with their friends.”

But it took time for many parents to find a rhythm of getting their kids through the school days while also working from home. Farnan spent mornings with her younger child sitting through the classes and shifted her work as a biostatistician at UNC-Chapel Hill outside of her usual hours.

The increased load of juggling work and homeschooling was the tip of an iceberg.

The pandemic often was more challenging for families with more than one child. Some families had children in different grades, trying to understand different subjects while also at different technology skill levels.

The anxiety among parents came from children struggling with distance learning and needing help with homework, according to a study that surveyed 3,338 parents across the country for symptoms of anxiety and mental health distress. Davis is the lead author of the study.

“Initially, when I wasn’t as skilled with homeschooling, it caused a tremendous degree of anxiety,” said Glorija Gladney, parent of a kindergartner and a first-grader who attended the same Chapel Hill school as Farnan’s.

Gladney also has a child who is 1 year old.

Their school opened to a hybrid model in the spring, offering in-person and virtual platforms. However, having the children back in the classroom did not produce the results that Gladney expected.

Most of the teachers were teaching from home or through video and audio media in a different classroom. Children accessed the lessons and assignments through screens and did not receive as much individual attention as some parents had hoped for.

“I was deeply disturbed with not just multi-month prolonged isolation, but with the fact that the virtual program seemed completely out of touch,” said Gladney. “They come home saying they had great fun playing and eating, but they didn’t learn anything.”

Gladney’s 6-year-old daughter, who did not read at the beginning of the year, worked with Gladney to finish her assignment.

Anxiety around the road ahead

Gov. Roy Cooper and North Carolina lawmakers have ordered all public schools to open for in-person learning in the fall. Many school systems plan to abandon virtual options when they come back from summer breaks. This will be the situation for Farnan and Gladney.

For her part, Farnan is not confident that it’s the best thing for her children to return to in-person classes until they are eligible for a vaccine. Currently, children under 12 are not eligible for immunization, although clinical trials are underway to test the safety and efficacy.

“Chapel Hill does not have multiple options for the fall,” Farnan said, “and we are actually devastated by that, because we will not let them go to school until after they get vaccinated.”

Sixty-two percent of the Orange County population was fully vaccinated as of July 2, according to the state Department of Health and Human Services vaccine dashboard, the highest percentage of all 100 counties in North Carolina. Despite that high rate, some parents of school children still struggle over the risks their children face.

“I would suspect that they would have additional anxiety of not being able to rejoin life in ways that people who are fully vaccinated are able to do,” said Davis.

While some are hoping and waiting for safe children’s vaccines, others are trying to minimize the risk of contracting COVID by taking their own protective measures. Gladney’s family has been using ideas from the DHHS’ StrongSchoolsNC Public Health guidelines, including wearing masks, going into isolation for at least 10 days if there’s a positive case in the class and routinely testing for COVID-19 while attending in-person classes.

“All those things make us feel better about our balance between making sure they get a normalcy, and carefully managing COVID risk exposure,” said Gladney.

Whether to get children back to school this fall depends on parents weighing the options among schooling models and children’s and parents’ needs.

“We know that if our goal is to reduce transmission of COVID-19 in schools, there are two effective ways to do that. One, vaccination. Two, masking,” said Kenecia Obie Zimmerman, professor of pediatrics at Duke University School of Medicine, during a briefing on June 30.

“The science suggests masking can be extremely effective, particularly for those who can’t get vaccinated while COVID-19 is still circulating,” she said.

Having to make such judgment calls and decisions for a family’s health could be difficult for parents who spent more than a year on an emotional roller coaster that included remote learning, hybrid platforms and plans to return to in-person school.

Much more research will be necessary to determine the extent to which those elevated anxiety levels remain or disappear as the state tries to push beyond the pandemic. That is a question that Davis is asking in her studies.

“We are looking at the relationship of parental trust in their schools that we hope to get out soon,” Davis said. “We are interested to see how that gets directed during a pandemic, and between parents and educators.”

Now, the highly infectious coronavirus delta variant is spreading across the country and North Carolina, where only 42% of the total population is vaccinated. Parents are likely to have concerns about attending schools, whether virtually or physically, when they come back from summer break, Davis said.

“The conversation of COVID impact on mental health and the long-term impact on education is going to continue for a little bit longer,” she said. “It impacts everybody.”

This article first appeared on North Carolina Health News and is republished here under a Creative Commons license.

During my educational career, I taught 4,000-plus students.

Badi Ali: Nothing could have prepared me for the aftermath of that day

When Patrick Dowdell said goodbye to his father on Sept. 9, 2001, he had no idea it would be the last time he would ever see his dad.

Robin Adams Cheeley: Excuse me if I don’t buy your faux concern

Folks always say there’s an episode of “The Andy Griffith Show” for everything. I think I’m starting to believe them.

Leonard Pitts Jr.: Activism is not a popularity contest

“He wears the clothes of a dissenter, but there’s a logo on his back.”

RALEIGH — Do the ends justify the means? This familiar question produces strong feelings precisely because its answer is necessarily complicat…

The Ethical Life podcast: Why are school board meetings latest front in culture war fight?

Richard Kyte and Scott Rada also discuss why more young men are not attending college and whether students should be allowed to take mental health days.

Fifth-graders wearing face masks are seated apart during a music class May 18 at Milton Elementary School in Rye, N.Y. “The science suggests masking can be extremely effective, particularly for those who can’t get vaccinated while COVID-19 is still circulating,” Kenecia Obie Zimmerman, professor of pediatrics at Duke University School of Medicine, said.

Jenea Edwards helps her son Elijah, 9, in the third grade, with his mask before heading into Manchester Academic Charter School on the first day of in-person learning via a hybrid schedule March 29 in Pittsburgh.

Mohamed Eltayeb adjusts his mask during the first day of pre-K Sept. 29, 2020, at Jefferson Elementary School in Greensboro.

Masks and safety precautions were in effect due to the coronavirus as parents drop off students for the first day of school Sept. 3, 2020, at William H. Ross in Margate, N.J.