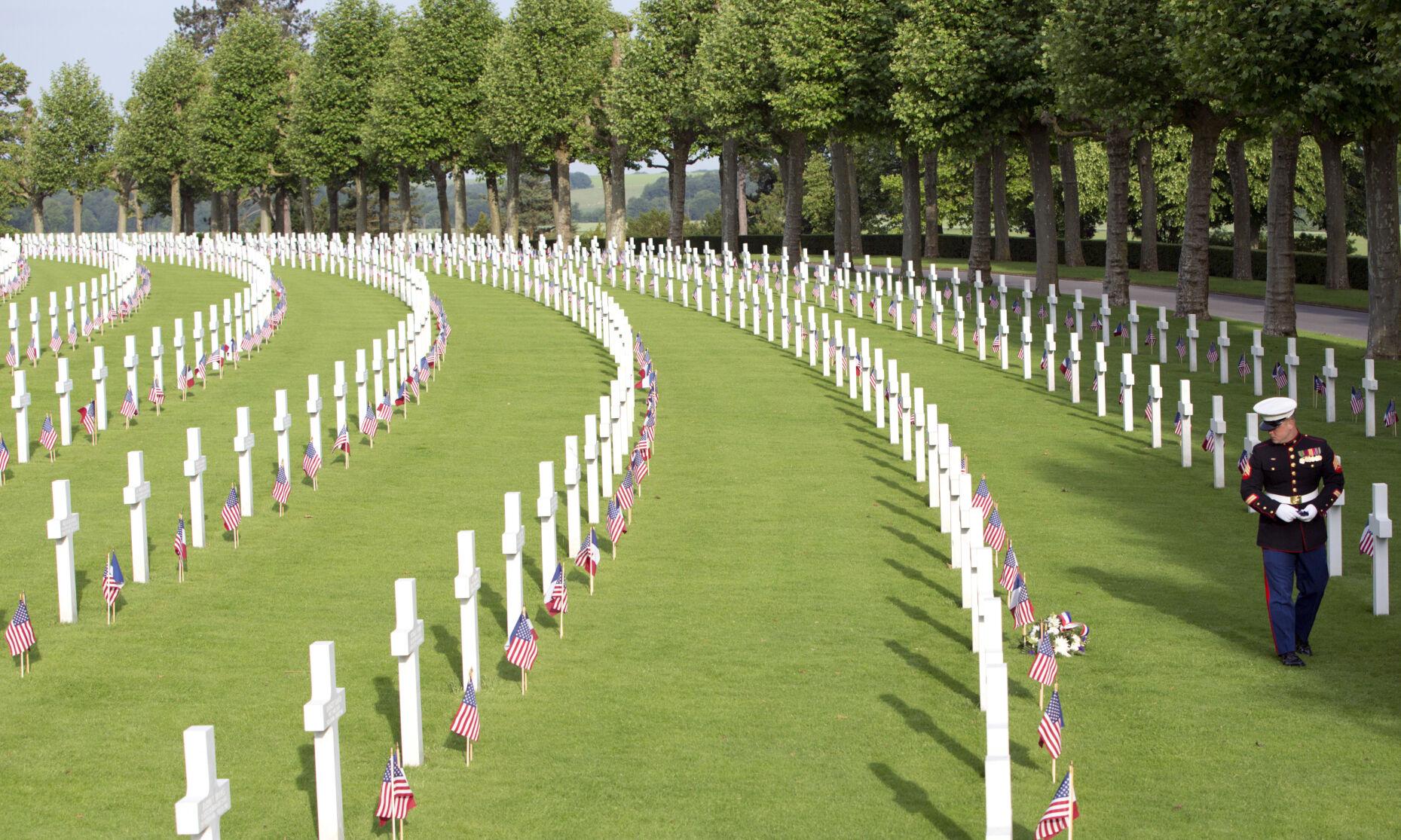 A U.S. Marine visits graves prior to a Memorial Day ceremony May 27, 2018, at the Aisne-Marne American Cemetery in Belleau, France.

My dad was a “loser.” He left his young wife and year-old son and joined the Navy, turned in his shotgun for a 40 mm anti-aircraft gun that he fired at incoming kamikaze planes from the deck of the USS Sibley.

His brother, Virgil, was a “loser,” too. And Clayton, his sister Doris’ husband. Vernon, Aunt Jewel’s husband, was in the Battle of the Bulge, but what I remember most is that he was Gen. Patton’s driver. I was proud of that. But I was just a kid.

Uncle Gene came home from the war with a scar in his side from a Japanese bullet. What a “sucker.”

I come from a long line of “losers” and “suckers.” Men in the prime of their youth who chucked it all to do what they thought was their patriotic duty.

They didn’t even have the temerity to be ashamed.

But at least they didn’t talk much about what they went through when they came home. Those who came home. Except my dad talked about the burials at sea — bodies of young men, under a shroud of red, white and blue, slipped into the ocean, a body bag for a coffin. It made a deep impression on that young man from east Texas. He didn’t realize that those Marines who died on Iwo Jima were “suckers,” too.

What “losers” we all were. We were actually proud of “the boys.” We kept their pictures on our mantels. Come to think of it, there’s a picture of my dad in his Navy blues on the wall in our entryway right now. Maybe I should face it to the wall.

How many times have we said, “Just when we thought Trump couldn’t go any lower  ... ”? I hope I don’t have to say it again, because I don’t know how much lower he can go than to call men and women who fought for, suffered and died for our country “losers” and “suckers.” Millions of Americans, me included, take that personally. Very personally.

Jeffery Goldberg’s article in last week’s The Atlantic — “Trump: Americans Who Died in War Are ‘Losers’ and ‘Suckers’” — added a truckload of fuel to a fire that had been simmering since Trump claimed John McCain was not a war hero simply because he was captured.

“I like people who weren’t captured,” he said. At the time, I chalked Trump’s callousness up to the meanness of politics. But when he objected to lowering the flag to half-staff when McCain died, that was taking personal animosity too far.

According to Goldberg, on at least two occasions Trump has called former President George H.W. Bush a “loser” for being shot down as a Navy pilot in World War II.

Citing multiple sources, Goldberg said that on a visit to the Aisne-Marne American Cemetery near Paris, Trump asked senior aides, “Why should I go to that cemetery? It’s filled with losers.” On the same trip he said that the 1,800 Marines who were killed at Belleau Wood in World War II were “suckers” for getting killed.

John Bolton, who accompanied Trump on that trip, told The New York Times, “I didn’t hear that. I was there for that discussion.” Then he added tellingly, “I’m not saying he didn’t say them later in the day or another time.”

The White House has said Goldberg’s article is “false” and “has no basis in fact.” But details in the article have been confirmed independently by the Associated Press, Washington Post, Huffington Post and even by a journalist at Fox News.

Goldberg says he spent a year talking with military officers, trying to understand “Trump’s seeming contempt for military service.” A friend of Gen. John Kelly, former chief of staff, said, “Trump can’t imagine anyone else’s pain. He just thinks that anyone who does anything when there’s no direct personal gain to be had is a sucker.”

I don’t care what the explanation is. There is no excuse for any American — certainly not the president of the United States — to hold those who serve our country at grave risk to themselves in such contempt. To do so is beyond despicable.

When my dad died, my mother was given an American flag, folded three corners, preserved in a glass case, a beautiful reminder that he was one of more than 16 million men and women who served in the military during World War II.  More than 400,000 of them didn’t come home.

Richard Groves is a former minister and educator.

“If you have a problem figuring out whether you’re for me or Trump, then you ain’t Black.”

Andra Ghent: The housing problem is really a wage problem

Finding affordable housing was a huge problem in the U.S. even before the COVID-19 pandemic — and it’s growing worse by the day as the economi…

George Will: Hypocrisy and constitutional etiquette

WASHINGTON — Sen. Lindsey Graham, the South Carolina contortionist, illustrates the perils of attempted cleverness by people with negligible a…

Allen Johnson: Another scandal that doesn't matter to Trump's base

Four seasons fill the measure of the year;

I can’t believe this is real life. Federal police wanted to use a heat ray against peaceful protesters outside the White House? At this point,…

Guilford school board OKs phased plan for return to school, possibly by the end of October for elementary, middle schools

A U.S. Marine visits graves prior to a Memorial Day ceremony May 27, 2018, at the Aisne-Marne American Cemetery in Belleau, France.