Deputy U.S. marshal Dominic Guadagnoli helps a women after she was injured in the terrorist attack on the World Trade Center in New York on Sept. 11, 2001. 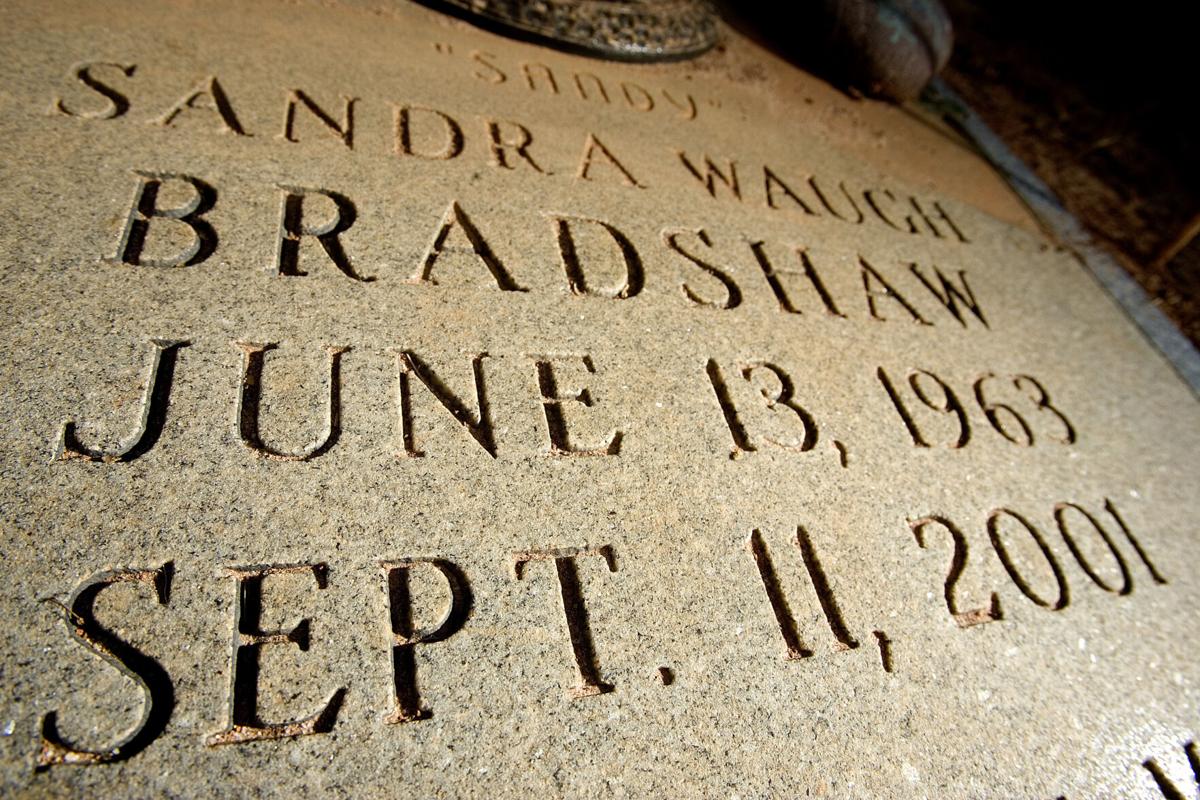 The grave of Greensboro’s Sandra Waugh Bradshaw who died aboard United Flight 93 on Sept. 11, 2001, at Forest Lawn Cemetery in Greensboro.

On a cloudless afternoon in 2001, they kept coming … and coming … young and old, friends and strangers.

Soon enough, the crowd had packed the sanctuary and overflowed into the basement for the memorial service for Sandy Waugh Bradshaw at Westminster Presbyterian Church.

Some who were there had known the Greensboro flight attendant who had lost her life on United Flight 93.

Many others had never met her.

They still sighed and swallowed hard and shed quiet tears.

Bradshaw was one of a group of passengers and crew members who decided to fight back.

So they plotted and planned and then they acted.

Using a refreshment cart as a battering ram, they attacked the plane’s cockpit, which had been commandeered by terrorists.

In the end, the Boeing 757 plowed violently into a field near Shanksville, Pa.

All 44 who were aboard died, including the four al-Qaida hijackers.

Among possible targets if that fourth aircraft had reached its destination were the U.S. Capitol and the White House — buildings with “high human intensity,” as the al-Qaida manual described it.

During phone calls to friends and relatives, the passengers had learned that two hijacked planes already had crashed into the World Trade Center towers in New York. A third had hit the Pentagon.

The passengers and crew of Flight 93 resolved collectively that a fourth plane would not be used as a weapon of mass destruction that day. And it was not.

“As Americans, we believed we had control over our lives inside secure borders,” Jere Longman wrote in his book about Flight 93, “Among the Heroes.” “On the day we lost that control, the forty passengers and crew members attempted to regain it. And thus, they won the first battle in the new war against terrorism.”

Many of us have wondered since that long nightmare of a day: What would we have done? Would we be paralyzed by fear and hopelessness?

Or would we have the presence of mind, as did Bradshaw, who was only 38 and the mother of three, to phone her husband for ideas? She was boiling water to use a weapon, she told him. What else would he suggest?

Could we have been as cool and as purposeful as she and her fellow crew members and passengers, knowing that these were very likely their last breaths and heartbeats?

Many called spouses and family members and told them they loved them. And then they took on the terrorists.

“Let’s roll,” one of their leaders, Todd Beamer, famously said.

The passenger manifest for Flight 93 had had an almost mystical quality.

William Cashman was an iron worker who had helped to build the World Trade Center. One of Bradshaw’s fellow flight attendants, CeeCee Lyles, had been a policewoman in a previous career. Donald Peterson and his wife, Joan Hadley Peterson, were crisis counselors. Several other passengers were emergency medical technicians. Yet another had his pilot’s license.

But if every act of heroism on 9/11 got the movie it deserved, we’d have hundreds of them: The police officers and firefighters who ran toward the burning towers. The many Americans who left their jobs and families and enlisted as soldiers, almost immediately.

And so many more ordinary people who did extraordinary things, cradling strangers in their arms in an eerie shower of toxic dust as the unspeakable unfolded around them.

There is no hard and fast date for it, but somewhere, somehow, during the two decades since that day, something changed. For too many of us the pronouns shifted from “we,” “us” and “ours” to “ “I,” “me” and “mine.” Or “us versus them.”

Americans still are capable today of performing such acts of great selflessness and sacrifice. If only more of us would.

We are faced with a pandemic that has claimed more than 200 times the number of lives lost on 9/11. Still, we have not come together.

And we know that our refusal to commit, as a majority, to these measures, is overwhelming hospital emergency rooms and intensive-care units.

It isn’t the only challenge we face. Far from it. But it’s the most urgent.

And yet we bicker and backtrack.

Perhaps it isn’t heroism to be kind and decent and a little less selfish. To be our brother’s keeper.

But it’s the right thing to do, and it would save countless lives.

Maybe, as we reflect on American courage in the face of the unimaginable tragedy, we can reclaim what was lost.

Maybe we really aren’t so different today from who we were 20 years ago.

Our Opinion: Our front-line heroes could use a little help

Is anybody noticing? Does anyone care?

Our Opinion: Biden vs. the coronavirus

President Biden spoke for millions of Americans on Thursday when he said, “Our patience is wearing thin.”

It’s a dubious distinction to be the first Triad resident convicted of a misdemeanor in relation to the Jan. 6 insurrection at the nation’s Ca…

Our Opinion: An officer in distress … at police headquarters

Out of the blue, a man walks onto the employee parking lot of police headquarters in downtown Greensboro and, using an accelerant, sets a mark…

Our Opinion: Turning ‘what if’ into reality

“Alternate history” — a genre of fiction that asks “what if” of crucial historic events — can produce thought-provoking questions and insights.

Our Opinion: It could happen here ... and it did

Our Opinion: The perfect opening act for the Tanger Center

It has been more than a year since the city’s new performing arts center was supposed to raise its curtain.

Deputy U.S. marshal Dominic Guadagnoli helps a women after she was injured in the terrorist attack on the World Trade Center in New York on Sept. 11, 2001.

The grave of Greensboro’s Sandra Waugh Bradshaw who died aboard United Flight 93 on Sept. 11, 2001, at Forest Lawn Cemetery in Greensboro.