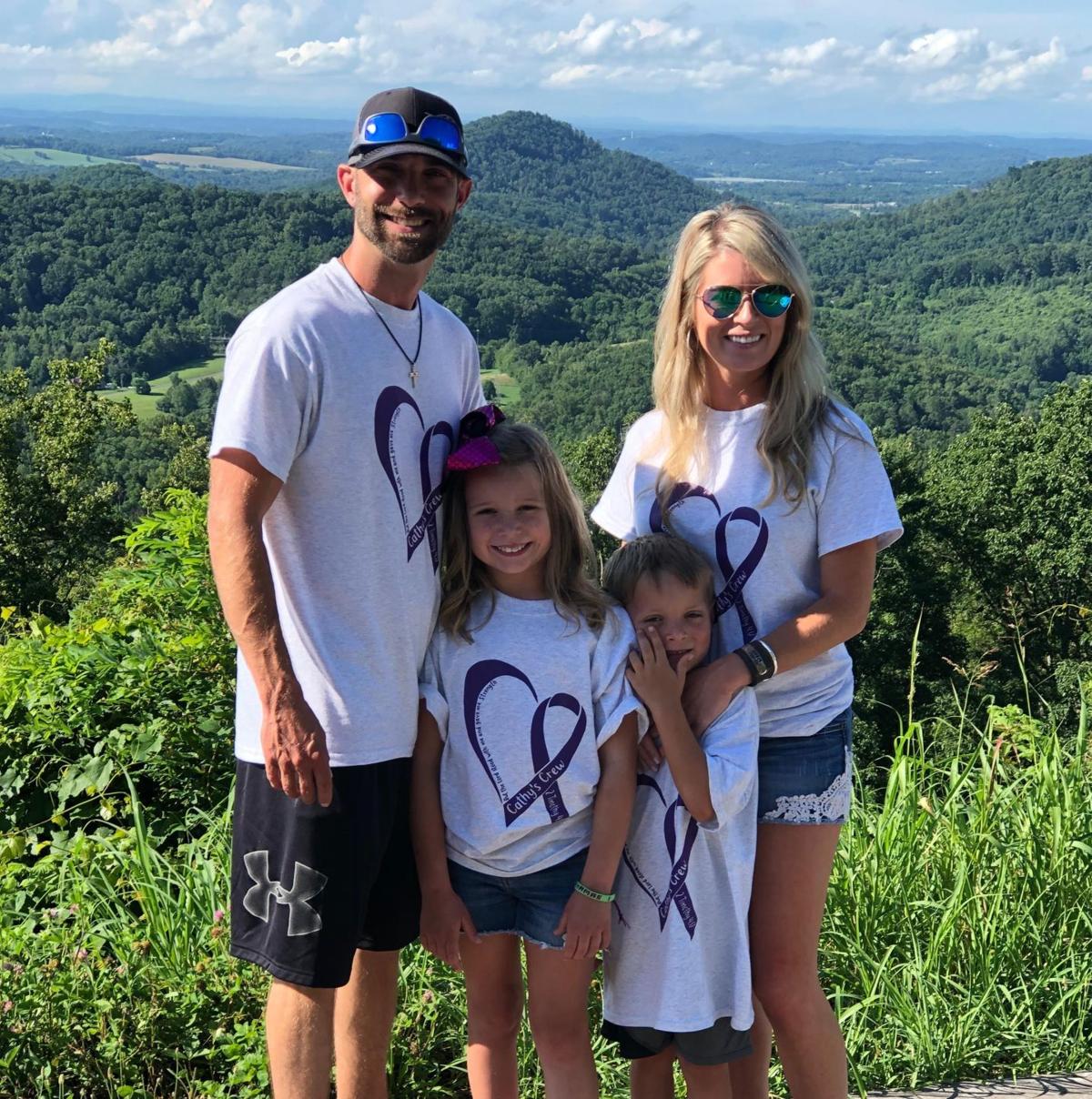 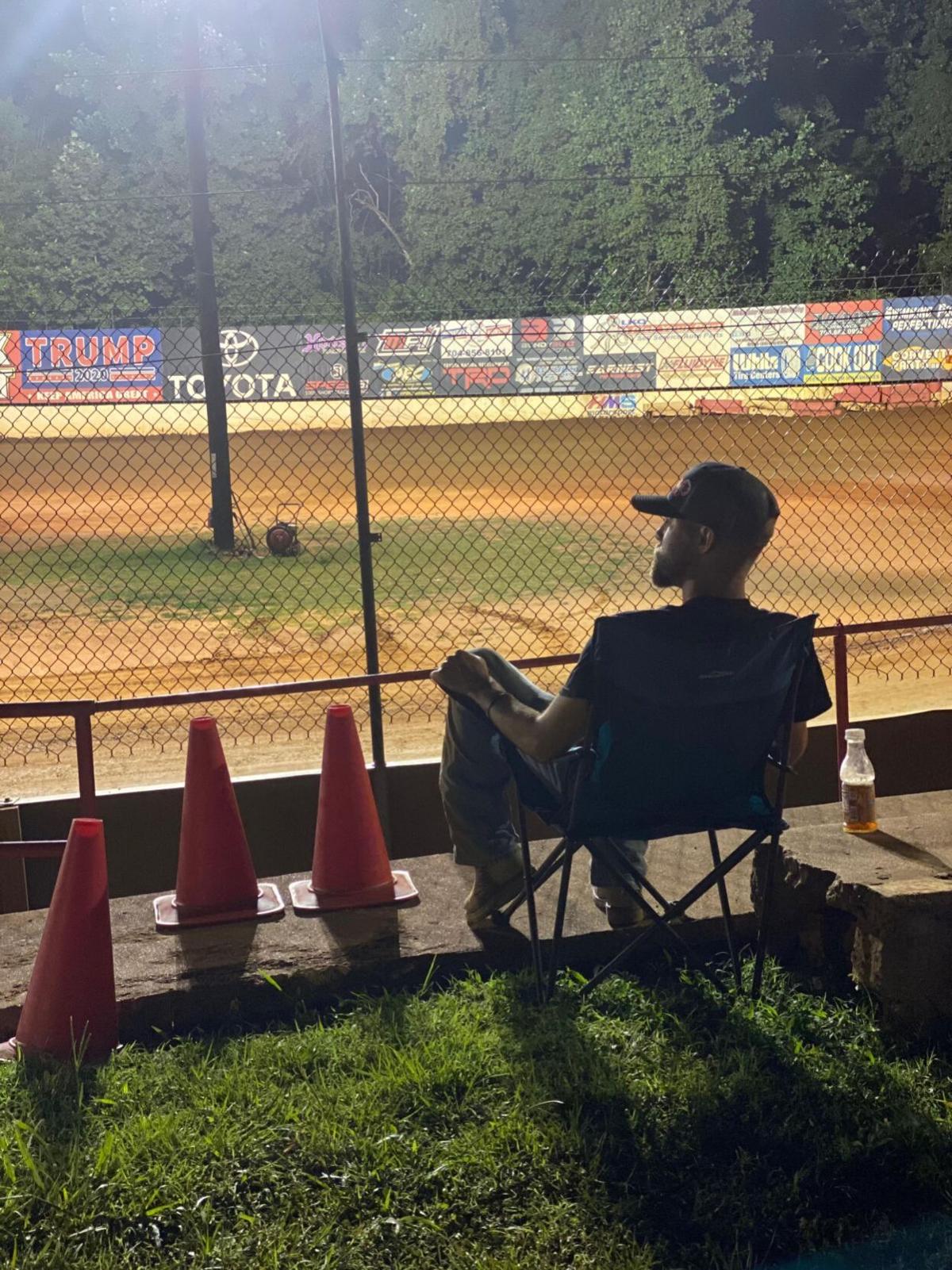 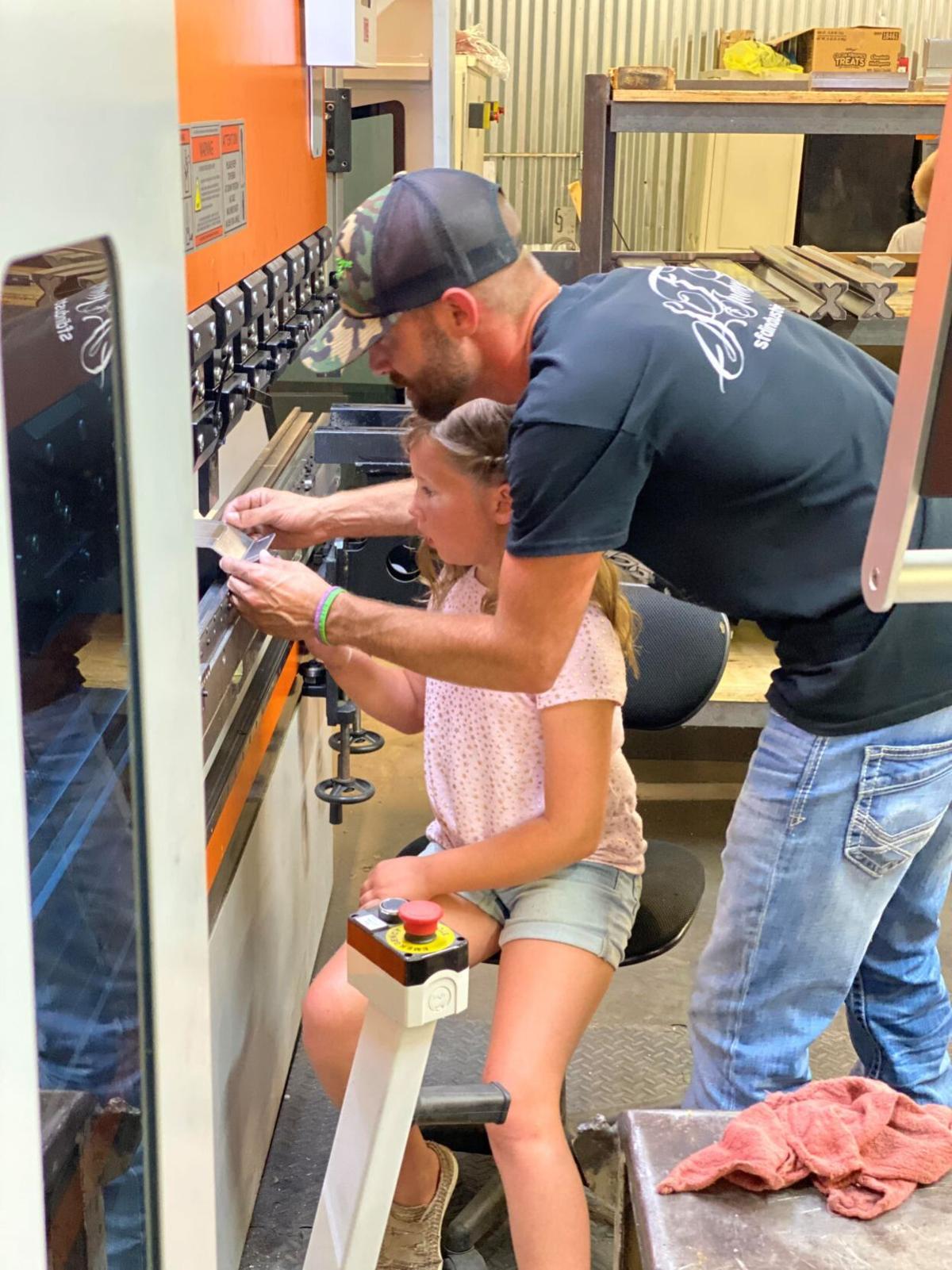 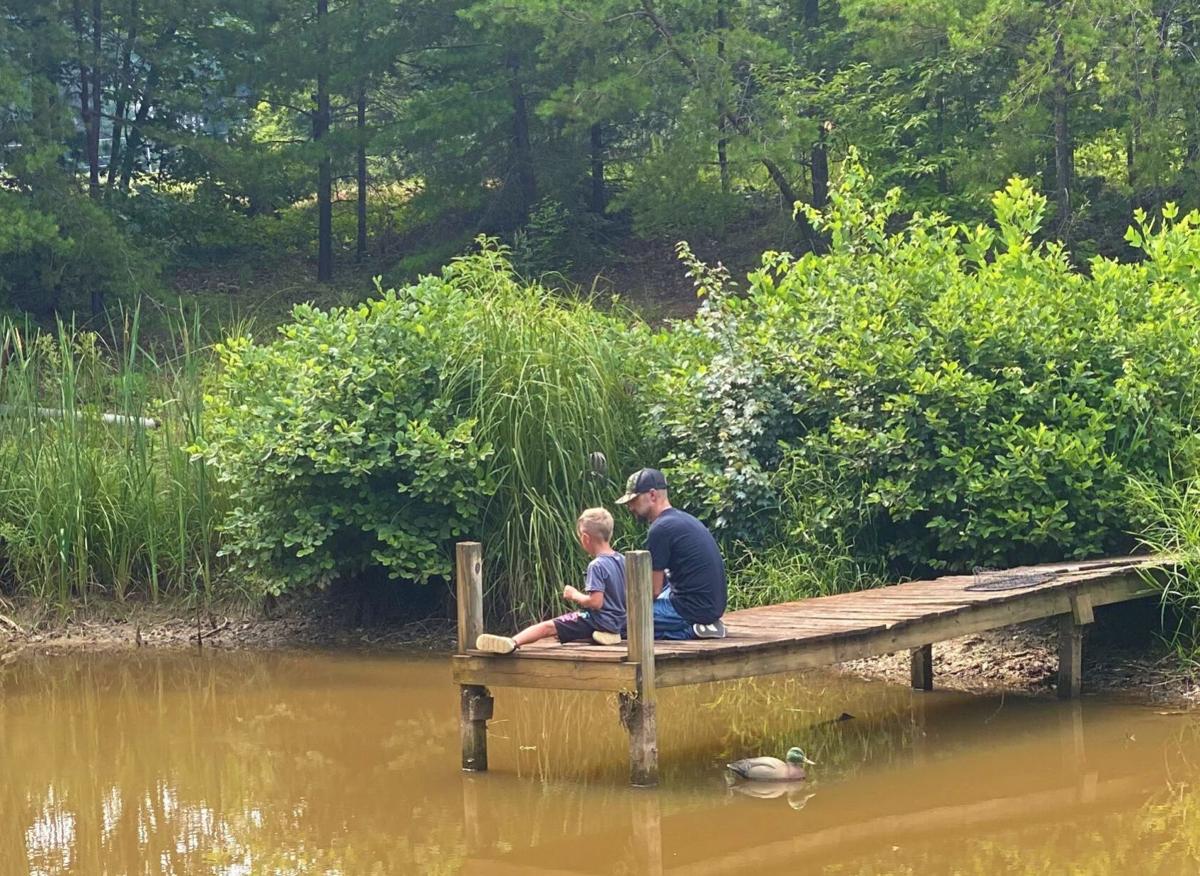 A line of firetrucks made their way through the streets of Madison — but this time they weren’t traveling with speed and urgency. Instead, they moved at a slow crawl, sharing cheerful messages of support for a severely injured young father, Joseph Tucker.

More than 15 fire departments from around Rockingham County came together on July 20 to hold the truck parade in honor of Tucker, 33, a firefighter at the Huntsville Volunteer Fire Department who’d recently returned home from the hospital after suffering life-threatening injuries in a June 21 utility terrain vehicle accident.

Joseph’s family sat watching the truck procession from the front porch of their home, but a recovering Joseph stood — waving his hat in appreciation of perhaps the most touching and powerful outpouring of support the Tuckers have felt in the wake of his horrific accident.

Each truck that passed had its own message of encouragement: “Get well soon!” “We’re praying for you, Joseph.”

Captain Seth Vaden, an HVFD firefighter and close friend of Joseph’s, says he was amazed at how quickly the community came together to uplift Tucker in strong numbers.

To Vaden, this support is not only emblematic of the community’s strength, but the strength of a fire department that is central to the lives of the Tucker family and many others folks in this western region of the county.

“We’re all a brotherhood,” Vaden said. “It doesn’t matter what department we’re with, if we’re paid, if we’re part time, if we’re volunteer — when times get tough and things happen, we all pull together like we should.”

These calls of brotherhood would ring true on the night of the accident. In fact, it was the HVFD crew from station 150 who were the first responders on the scene.

The Tucker family had just finished celebrating Father’s Day with a Sunday night dinner at Joseph’s parents’ home on their farm off Highway 220.

Joseph’s dad, Lee Tucker Jr., had misplaced his keys, so Joseph and his 7-year-old son, Tanner, rode a UTV about 250 yards to the machine shop behind the house to look for them.

On their way back to the house, Joseph reached down to grab his phone when his mother called to ask if they’d found the missing keys.

That was when the Tuckers believe Joseph must’ve turned too abruptly and flipped down a steep embankment next to the driveway.

Joseph’s dad and sister, Dana Tucker, were the first to discover what had happened, and Dana immediately ran down the hill and called 911.

When she got to the bottom of the embankment, she saw Tanner, miraculously unharmed and on top of the flipped UTV. But underneath, things looked bleak.

Joseph had been thrown from the vehicle and was pinned by his neck beneath the UTV’s roll cage bars.

Joseph’s dad rushed to get his tractor and backed it up to the edge of the gully. And with the help of Joseph’s best friend, David Ricketts, and brother-in-law, Jacob Tucker, hooked chains around the UTV and lifted it off of Joseph.

During the rescue, Jacob stood between the UTV and Joseph, ready to protect him and take the hit if it fell.

The HVFD arrived shortly after the family had freed Joseph from the weight of the UTV, also known as a ranger. They quickly braced his neck, placed him on a backboard and lifted him up the gully in a medical evacuation basket.

Joseph’s pulse was shallow. He was barely breathing, and he had sustained heavy trauma from just below his nose to the top of his shoulders.

His family coached him to fight.

“My dad, David, and Jacob were all telling him, ‘You’ve got to fight. You’ve got to breathe,’” Dana said, “and that was really when he took his first breath again.”

Dana says she doubts Joseph would have made it out of the gully alive if not for her family’s quick action.

A community races to help

From there, Joseph was transported by airlift to North Carolina Baptist Hospital in Winston-Salem.

Within hours, the Tucker family saw community members show up. Thoughtful friends brought chairs to the Tuckers for their wait in the hospital’s parking garage while Joseph underwent emergency surgeries.

The help didn’t stop there. Most every day, people from the county brought meals to the Tuckers or donated money to help offset Joseph’s medical bills.

The sign in front of the HVPD has read “Tucker Strong” since the accident, and the firehouse will host a fundraiser for the Tuckers on August 21-22. Proceeds from the Boston butts barbecue sale will go toward medical bills for Joseph, who is raising Tanner and sister Josie with his wife, Claire.

Other close friends and family have designed T-shirts and bracelets displaying the same “Tucker Strong” credo, as well as the Bible verse 2 Timothy 4:17. It’s the same verse the family used in support of Joseph’s mother, Cathy, when she was diagnosed with pancreatic cancer in 2018.

Joseph and his father run a machine shop off Highway 220 called WMS Products that boasts customers from all over the country. And since the accident, patrons from all over have flooded the shop’s email with good tidings, Dana said.

Joseph’s first few days in the hospital did not look good, Dana explained. Doctor’s placed Joseph on a ventilator that would keep him alive for an entire week.

Dana credits her family’s faith and the community’s collective prayers with helping her brother through what seemed like a near impossible situation.

“On the seventh day, which was Sunday, everything just kind of miraculously turned around,” his sister said. “I’m just thankful for everyone’s prayers and God answering them so he wasn’t robbed of his short life. I don’t believe it was his time, and God made sure he came through.”

After 10 days in the hospital, Joseph was able to come home and continue his recuperation. Just last week he returned to the shop where he’s taking it easy and working limited hours. And he is expected to make a full recovery.

Still healing from a major jaw surgery that requires his jaw to be bound shut with rubber bands, Joseph is limited in how much he can eat or talk for the time being.

His own generous spirit inspires others

In this farm community where the Tucker family has long-operated a fruit farm, Joseph has a reputation for his own willingness to help others in need. And that likely inspired the strong community support he found after his accident, Dana said.

When Joseph was 17, his cousin of the same age died in a car accident. From then on, he knew he wanted to help people in emergency situations. So Joseph joined the HVFD that year, and after 16 years, he’s never looked back.

Just two weeks before his accident, Joseph responded to multiple serious calls, including a couple of fatal car accidents on Highway 220. Another emergency saw him ride in an ambulance with a small child after the little one got into an adult’s heroin.

“He might not make every fire meeting, but if there’s a call and he can be there,” Dana said, “he’s always there to help someone in need.”

And it’s not just Joseph’s personal standing that makes him so well loved in the community. Dana says the community looks out for The Tuckers because of the legacy her grandparents have forged.

Joseph’s grandfather, Lee Tucker Sr., was the chief and founder of the HVFD back in the ‘70s. He and his wife had seven sons, almost all of whom were volunteer firefighters.

“There’s people that just make an impression on you, that make you feel good,’’ Dana said.

So seeing footage of that line of firetrucks meant something very special to Lee Tucker Sr.

As Dana showed him a video of the parade, she leaned down to him and said, “They did this for Joseph, but they also did it for the legacy you created,” she said, as her grandfather teared up.

WENTWORTH - Rain fell steadily, but a bright green star shown through from atop an historic barn here Thursday morning.

Eden gets into the swim of new otter habitat

Penn's 'Let Me Out' is cathartic country anthem for the pandemic

SURF CITY, N.C. — In the midst of a pandemic, musician and Madison native Vaughan Penn is experiencing a creative rebirth, looking for hope an…