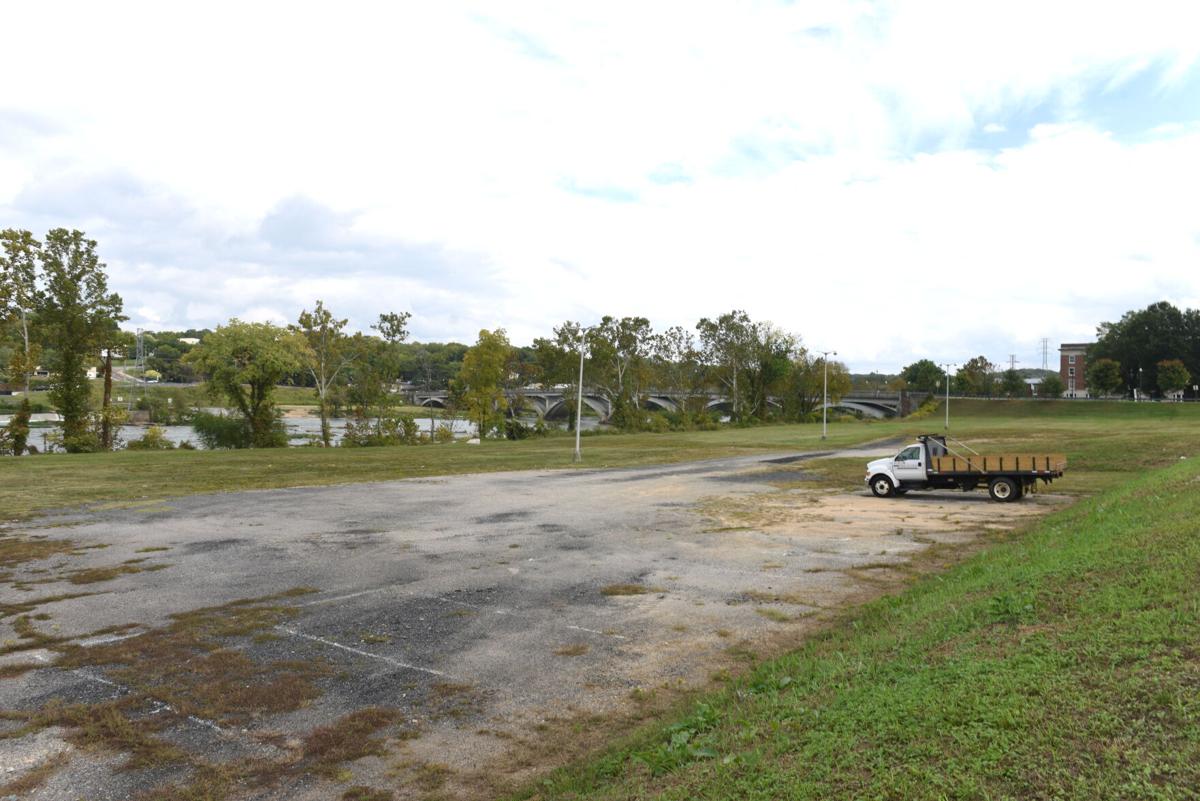 The 4-acre area between King Memorial Bridge and the White Mill building at Main Street and Memorial Drive in Danville could be the site of a new riverfront park.

Open green space makes up a large portion of the proposed park, which also would feature a staging area. There would be an elevated walkway/viewing pier stretching about 20 to 25 feet above the park and part of the Dan River and a water feature.

DANVILLE, VA. — Danville officials say they are not giving up on the proposed riverfront park project next to the King Memorial Bridge even though COVID-19 has stalled those plans.

"We're still figuring out how to pay for it," City Manager Ken Larking said. "It's sort of on hold until additional funding comes forward."

Between $5 million and $6 million has been raised for the estimated $10.1 million project, including a $4 million challenge grant from the Danville Regional Foundation that city officials must match.

"We're approximately 60% of the way there and actively seeking partners both locally and for national and federal funding," said Jason Bookheimer, division director of community recreation for Danville Parks and Recreation.

Money has also come from grants and from settlement money paid by Duke Energy as a result of the coal ash spill into the Dan River in February 2014. Donations from civic clubs and other nonprofits also make up some of the funds, Larking said.

But COVID-19 has slowed down fundraising efforts as organizations redirected to help those affected by the pandemic and its economic impacts, Larking said.

The city was expecting $740,000 in state assistance for the project, but he said that money had to be re-obligated because of the pandemic.

"It (the pandemic's) definitely has had some effect on it, especially when it comes to fundraising," Bookheimer said of the project.

Officials aren't ruling out possibly using revenue from the planned casino to pay for the park, that is if voters on Nov. 3 approve a Caesars Virginia casino resort at Schoolfield.

"It's possible," Larking said. "But that hasn't been determined. That's certainly one possible use of the funds."

Danville officials have said they hope to build a riverfront park on about 4 acres at Main Street and Memorial Drive between the White Mill site and King Memorial Bridge.

The project has been in the works for at least four years.

Both Larking and Mayor Alonzo Jones said the city aims to see it through.

"We've had to put it on pause, but our effort is still going on," Jones said.

The city's Industrial Development Authority gave 4 acres to Danville, and Site Collaborative, a design firm based in Raleigh, has been the contractor for the project.

The park would include a street-level entrance on its southeast side — from Main Street and Memorial Drive — with an “artistic feature” to lure visitors. Those entering the park would then step down to a water feature an interactive fountain and spray pad.

That area drops about 10 feet and leads to a circular lawn. Open green space makes up a large portion of the park, which also would feature a staging area that could be used for small performance events. There would be an elevated walkway/viewing pier stretching about 20 to 25 feet above the park and part of the Dan River.

Close to the river, the Riverwalk Trail would snake across the northern portion of the park, bordered by green space. The trail would be 20 feet wide. A step-down terrace would lead to the river’s edge.

A small children’s play area would be at the western side of the park.

Early voting off to a strong start

DANVILLE, Va. — The ghost of Camilla Williams wants to connect with Danvillians in this year’s “Ghosts and Gravestones Historical Tour,” spons…

County Bookmobile is on the move

The Rockingham County Bookmobile is a great resource during this time of social distancing during the pandemic. Take advantage of this rolling…

The numbers around COVID-19 can seem overwhelming. Is it spreading? Where in North Carolina is COVID-19 spreading fastest? How is COVID-19 imp…

WENTWORTH — Two Rockingham County centenarians received one of the state's most prestigious honors from during a meeting of the county commissioners.

The 4-acre area between King Memorial Bridge and the White Mill building at Main Street and Memorial Drive in Danville could be the site of a new riverfront park.

Open green space makes up a large portion of the proposed park, which also would feature a staging area. There would be an elevated walkway/viewing pier stretching about 20 to 25 feet above the park and part of the Dan River and a water feature.