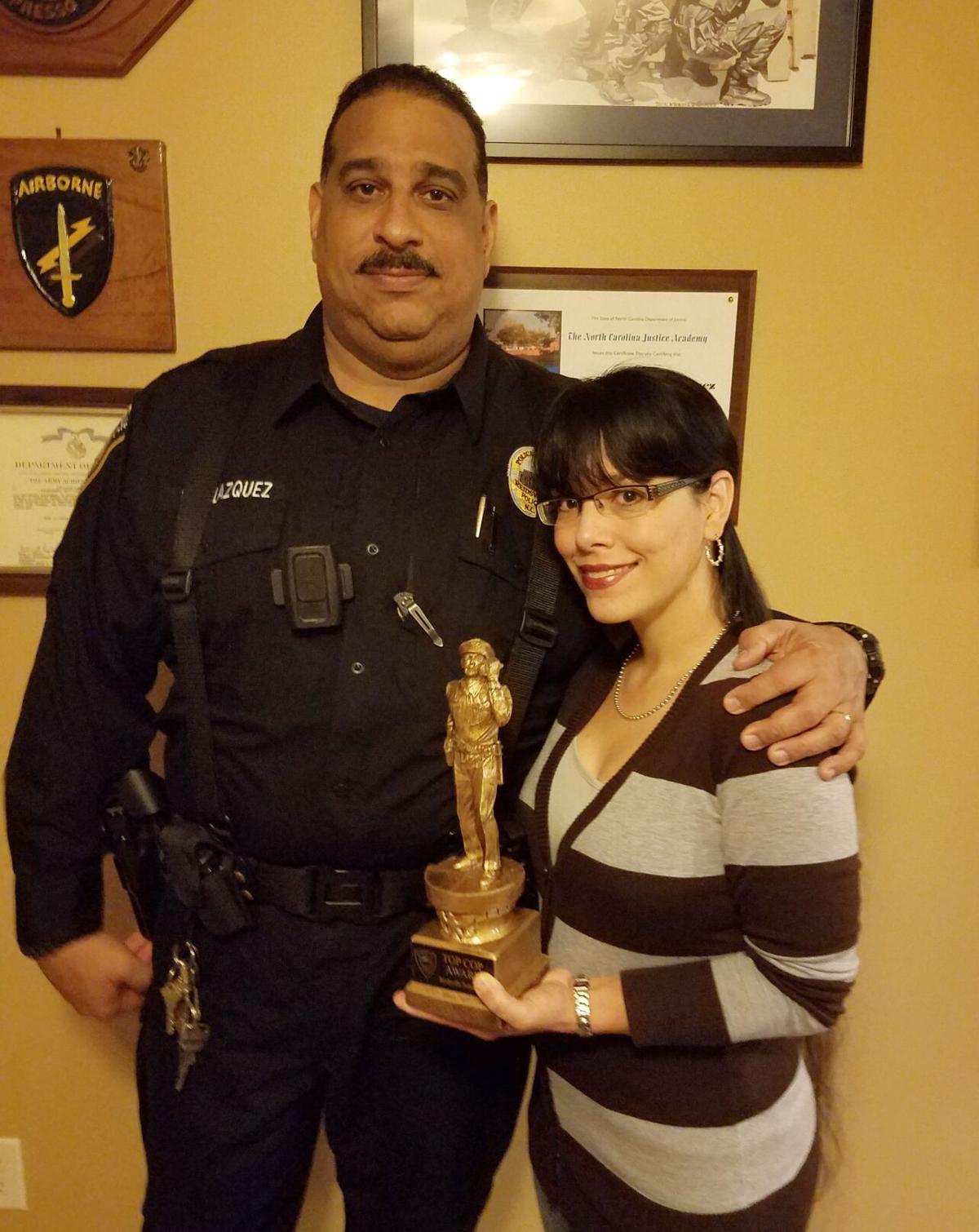 Daniel and Marty Velazquez proudly display his trophy after he was named Reidsville Police Department’s Top Cop of 2016. 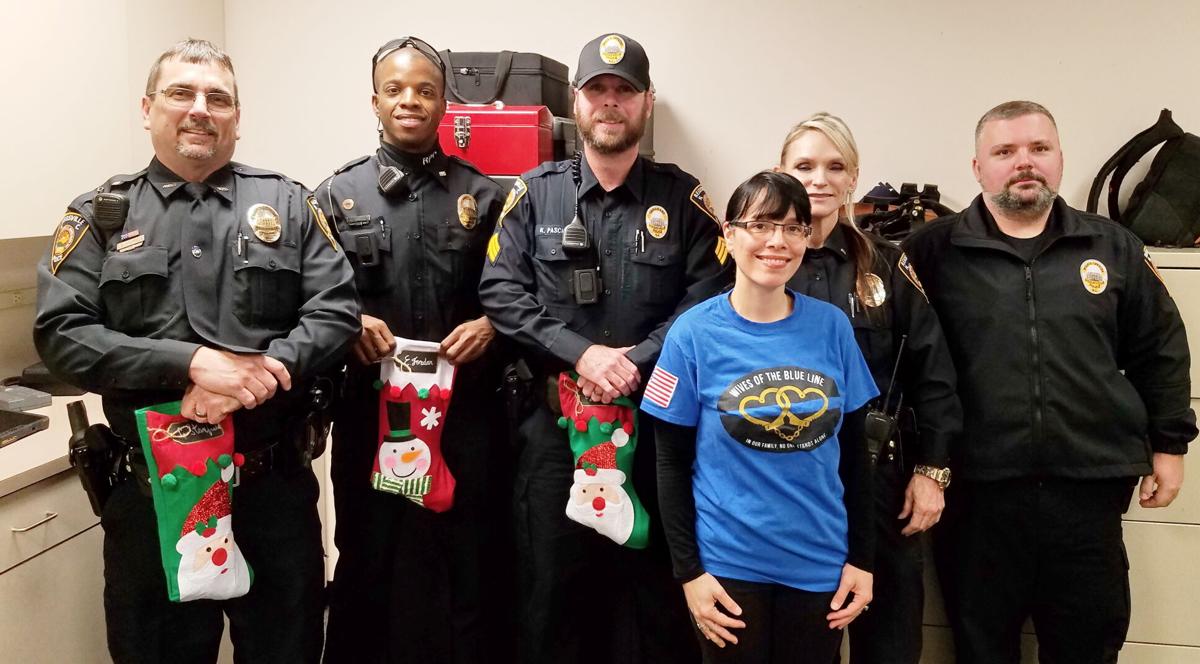 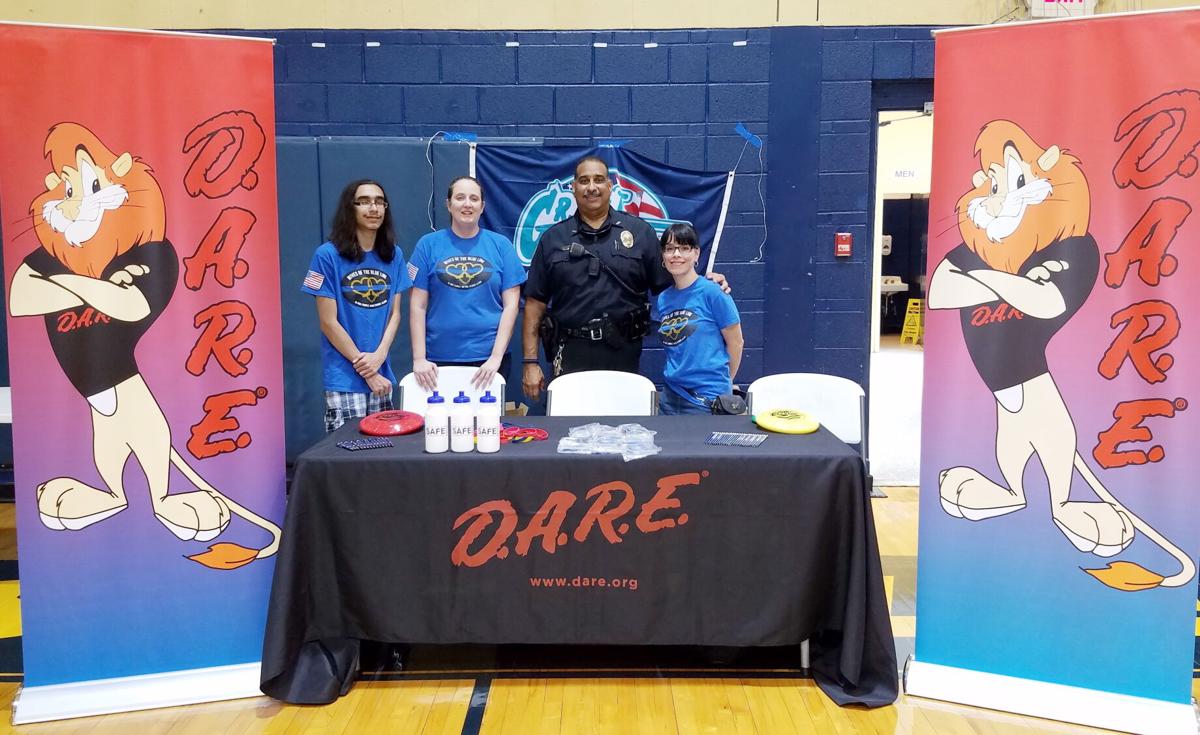 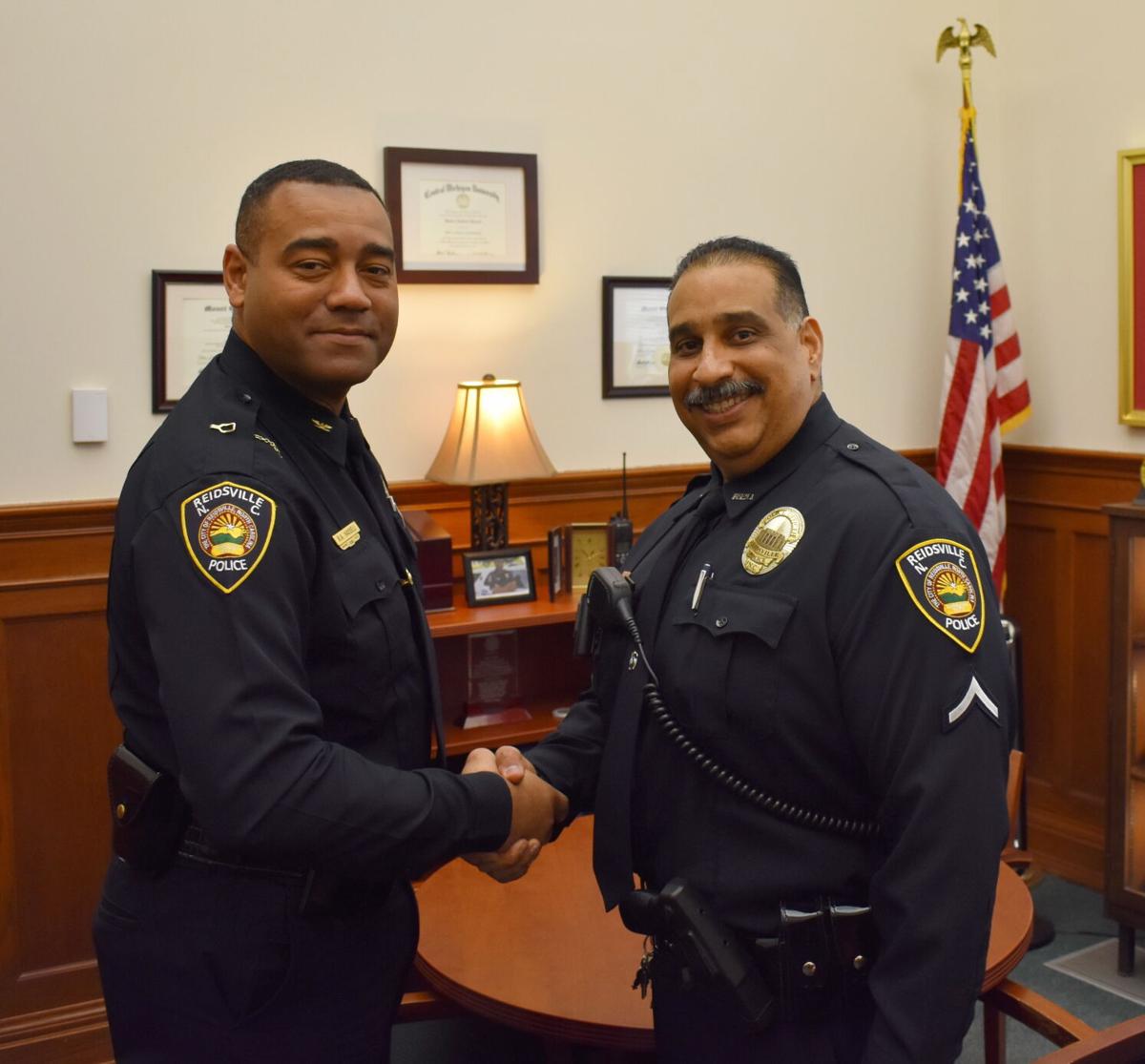 Last Christmas, Daniel Velazquez volunteered with the Fill the Trunk project to provide gifts for needy children in Reidsville. 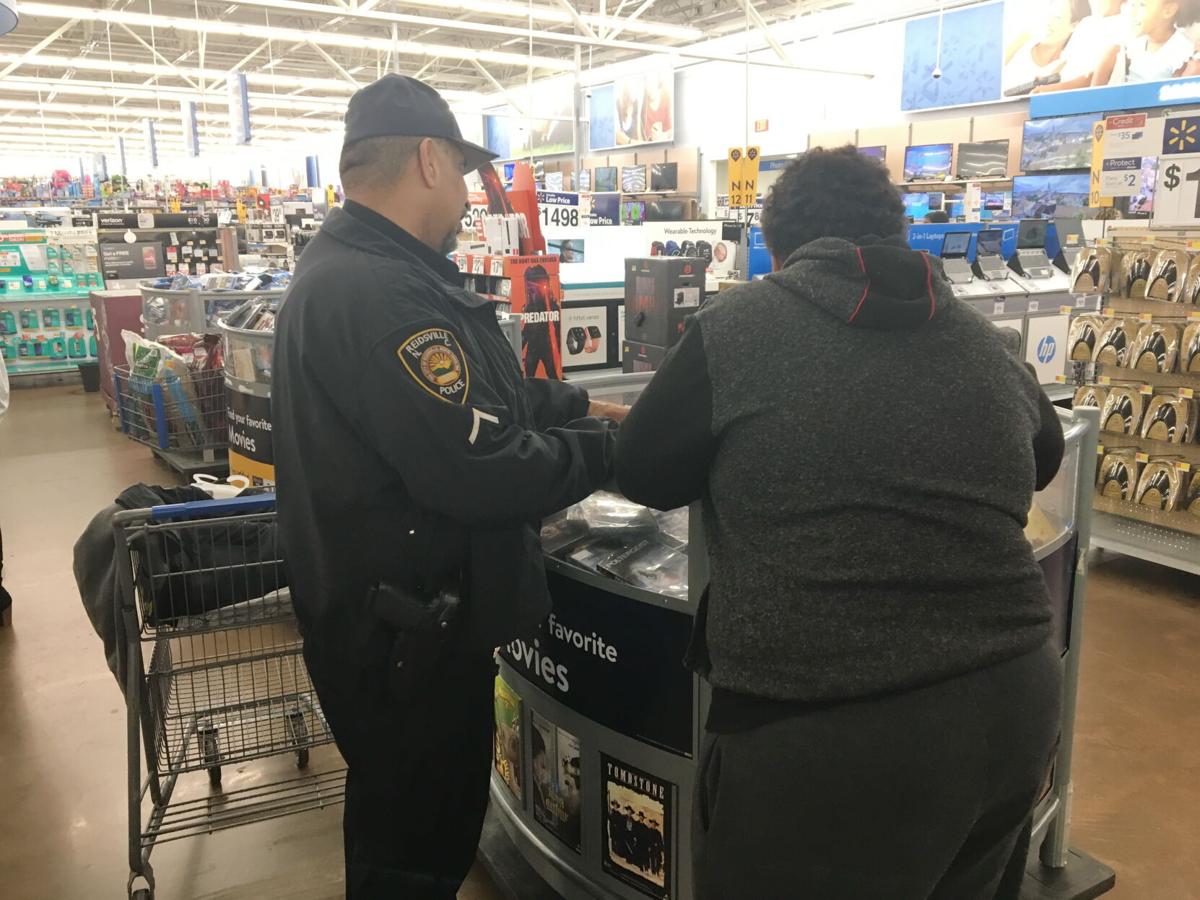 REIDSVILLE — Prayers and a lot of faith brought New York native Daniel Velazquez and his family to Reidsville in 2008. A short time after arriving, he joined the Reidsville Police Department.

Velazquez had been working for the Miami/Dade Sheriff’s Department for four years when he and his wife, Marty, decided they didn’t want to raise their son, Elisha, now 18, in Miami. They also were tired of dealing with the constant hurricanes and storms, he said.

On Aug. 31, Velazquez retired from the police department and now is relaxing and enjoying spending time with his wife and son, who attends early college at Rockingham Community College.

The decision to come to Reidsville evolved after the couple found a house to rent here.

“Every place we looked for property, even to rent, didn’t work out,” Velazquez said. Eventually, he had a phone conversation with Mick Nickerson, who offered him a rental home in Reidsville.

Shortly after they arrived, Velazquez stopped by the police department where he met Nancy Bennett, an administrative lieutenant under Chief Edd  Hunt. Velazquez applied for a job that day and started work in November.

His favorite position at the department was as a DARE instructor at South End and Moss Street schools, Velazquez said.

Those duties often went beyond classroom instruction. He recalls one little girl who “was pretty much taking care of her younger siblings” because her mom was on drugs.

A compassionate Velazquez intervened to get the child some help and her mother off drugs. He said the last time he saw them, “Mom was working and the kids were doing well.”

The retired Army veteran also enjoys participating in various programs the department has to help people in need.

Each year, the officers and their families do a toy drive for children.

“We will contact the schools and churches and see if there is a needy family in the neighborhood somewhere and go and buy the children stuff for Christmas,” Velazquez said.

“People sometimes give us cash,” he said, adding the officers then get to shop for toys and clothes for the children.

Although he is now retired, Velazquez said he plans to continue working with that project and other departmental community initiatives.

Marty Velazquez and other women from the department also have established “The Wives of The Blue Line,” a program to help officers if they are sick or hurt on the job. They provide food and other necessities for those families.

Born in the Bronx, N.Y., Velazquez lived there until he was 10 and his family moved to Miami, where he graduated from high school 1982. He immediately joined the U.S. Army and became a paratrooper in the 101st Airborne. He served in the first Desert Storm, then in Central and South America, most of the time working special operations in the Southern Command (SOCON).

In 1992, he and Marty, a native of Puerto Rico, were married. Ten years later, Velazquez retired from the military, and they moved back to Florida.

After a couple years of retirement, he joined the Miami/Dade Sheriff's Department, often highlighted on different law enforcement and crime television programs. Velazquez was on duty when a Court TV program was filmed and later aired on A&E.

Now that he is retired, Velazquez said he “has a lot of yard work” awaiting him.

Although he plans to get a part-time job, Velazquez already teaches CCW (carrying a concealed weapon) and defense tactics classes and helps his wife with her baking business, “Dang Delicious.”

She bakes and sells breads, cakes, scones, pies and other items at the Reidsville Farmer’s Market on weekends. She also does wedding cakes and what her husband describes as “elaborate” birthday cakes.

Apparently, Velazquez also has taken some lessons from his wife because he won second place last year at the Dixie Classics Fair for his “Death By Chocolate” mousse pie.

For more than 20 years, Velazquez was a competitive power lifter.

In his “spare” time, he enjoys making military models of tanks and airplanes and collects military and law enforcement memorabilia.

Although he and his family were attending another church, they began going to New Life Baptist Church on East Market Street after Brian Patterson, an officer on his shift, invited him to a service there.

Definitely not one to sit back and relax, Velazquez is filling his retirement days spending time with his family and helping others.

Meanwhile, put the 2 cups dark chocolate and the ¼ cup butter (cut in pieces) in a small bowl; set aside. Heat 1 cup of the whipping cream in a small saucepan to a slight boil, then pour it over the chocolate mixture. Let sit 5 minutes, then mix until smooth. Let cool to room temperature, then pour it into the cooled crust and refrigerate 30 minutes.

Early voting off to a strong start

DANVILLE, Va. — The ghost of Camilla Williams wants to connect with Danvillians in this year’s “Ghosts and Gravestones Historical Tour,” spons…

County Bookmobile is on the move

The Rockingham County Bookmobile is a great resource during this time of social distancing during the pandemic. Take advantage of this rolling…

The numbers around COVID-19 can seem overwhelming. Is it spreading? Where in North Carolina is COVID-19 spreading fastest? How is COVID-19 imp…

WENTWORTH — Two Rockingham County centenarians received one of the state's most prestigious honors from during a meeting of the county commissioners.

Daniel and Marty Velazquez proudly display his trophy after he was named Reidsville Police Department’s Top Cop of 2016.

Last Christmas, Daniel Velazquez volunteered with the Fill the Trunk project to provide gifts for needy children in Reidsville.