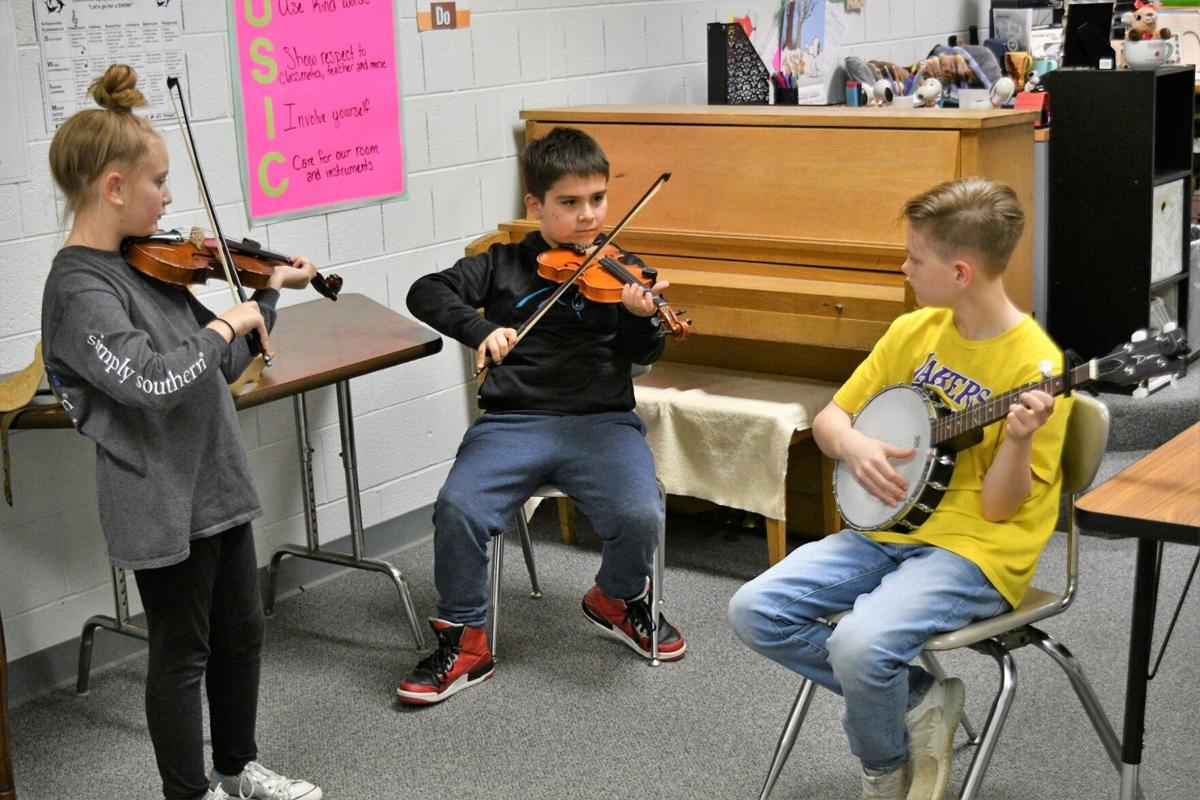 A trio of young musicians practice fiddlin' and pickin' during a P.I.C.K. instruction session. 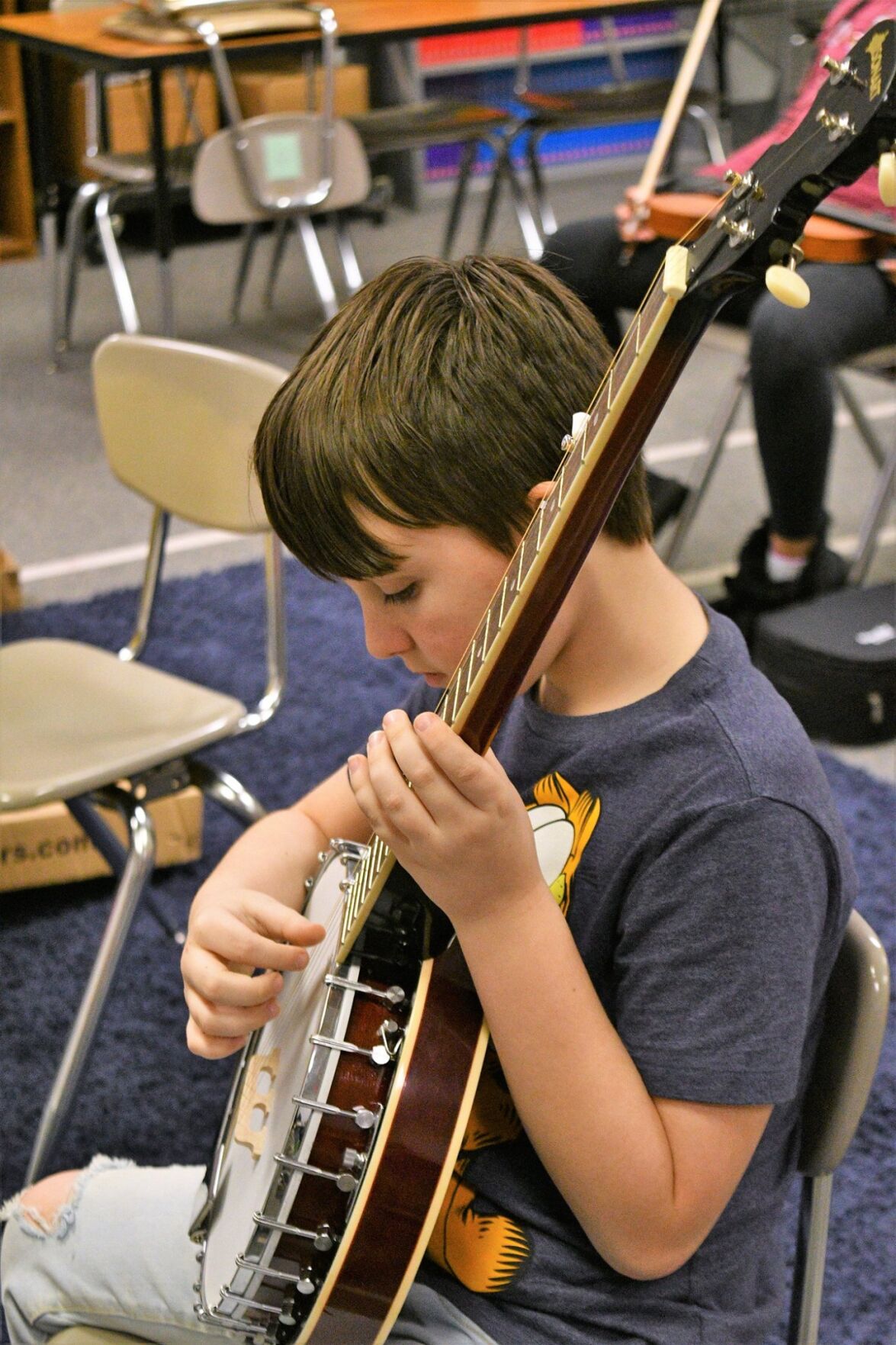 A young man studies the fretboard on his five-string banjo. 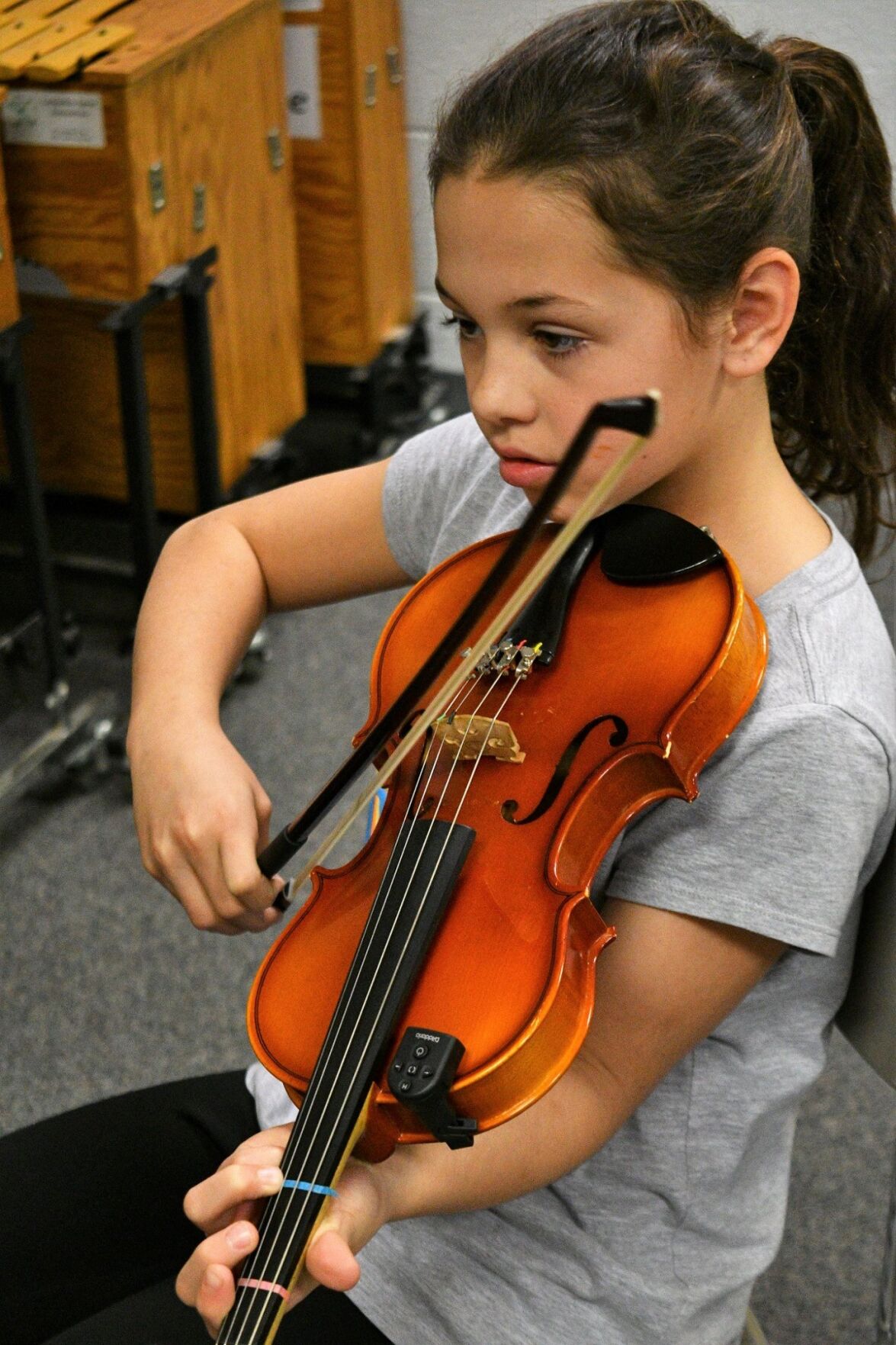 While their tune may not ring perfectly through tablet and computer speakers used for pandemic-era ZOOM sessions -- each week, these young musicians learn a lot about their region’s musical heritage and add another melody to their growing music foundation.

And P.I.C.K. instructors are teaching their students how to continue the traditions of Piedmont folk music, built on the strings and choruses of mill workers and storytellers of the early 1900s.

Sponsored by Piedmont Folk Legacies, P.I.C.K. is headed by Executive Director Louise Price who founded the program in 2019 after finding inspiration during a Charlie Poole Festival weekend.

There she witnessed the impact the festival’s competition, camaraderie and instruction had on young musicians.

Inspired by the Junior Appalachian Musicians Program, which offers a similar experience for students in the mountain counties of Virginia, North Carolina and Tennessee -- Price set out to focus teaching instruments and music specific to Piedmont heritage.

Now, after a successful five-week virtual summer session, P.I.C.K. will begin a 36-week free program for young students who will learn the basics of playing, as well as the history behind the sound.

“The Piedmont region of our state is so incredibly important to the development of American music,” said Price, whose brainchild also provides loaner instruments to participating students at no cost.

“Charlie Poole, Fiddlin’ John Carson and the string band era in the 1920s is credited for bringing American music into the modern age, and it happened right here in the Piedmont,” Price said.

Celebrating cultural history with community support from organizations such as the Reidsville Area Foundation, HomeTrust Bank and the Rockingham County Education Foundation, P.I.C.K. has successfully placed banjos, fiddles and guitars in the hands of kids that might not otherwise have access to a stringed instrument or lessons.

“We had to do this for the kids and the response has just been incredible,” said Price, clearly joyful as she discusses the idea of year-round instruction.

“I continuously see the spark that I only was able to witness before on Charlie Poole weekend,” said Price. “Now, it’s happening all year long as these kids get a chance to develop, learn and grow into these instruments. By doing this, we are going to keep our culture alive moving forward.”

For Price, heritage is paramount in the development of the young musicians, who will eventually develop their own styles and sounds.

P.I.C.K. encourages bravery, courage through the lens of the legendary Charlie Poole

There is no hiding the fact that P.I.C.K. aims to honor the style of area native Charlie Poole -- an American music legend whose three-finger pickin’ banjo technique helped revolutionize many music genres.

Poole, who came to the area for work from Randolph County in 1918, was one of many recruited to the area’s mill village lifestyle.

“They changed nothing but their abode and they brought their culture with them,” said Kinney Rorrer, a descendant of booth Poole and the famed late fiddler Posey Rorer. A longtime history professor, Rorrer serves on P.I.C.K.’s honorary advisory board.

In Spray, places like the Carolina Cotton Mill embraced hill country culture that thrived on music and dancing. In fact, the mills provided music classes for workers and supported string bands and artists, Rorrer said

Oftentimes, mill owners would hire Poole and his band to play parties.

“P.I.C.K. is a good way to have those kids keep tradition going,” said Rorrer, author of Ramblin’ Blues: The Life and Songs of Charlie Poole. “It would have been their great grandparents that moved down to work in the mills from Floyd County and Patrick County and Franklin County, (Va.). Music was a very important part of their lives and they kept it going.”

Poole, who formed the North Carolina Ramblers band with Rorer and guitarist Norman Woodlief, would eventually leave his job in the spinning mill to pursue his dream of recording music.

In 1925, the trio landed a contract with New York’s Columbia Records -- recording “Don’t Let Your Deal Go Down Blues” -- one of more than 60 songs recorded by the band in the 1920s.

The song sold over 106,600 copies during an era when only 6,000 phonographs could be found in the Southeast, according to Rorrer.

“When Charlie Poole went to New York to make his first record, he couldn't read a stop sign -- he was an illiterate cotton mill worker. And yet he was bold enough and brave enough to go up there and try to get some of his music recorded,” said Rorrer.

“He didn't have an invitation, nobody asked him to come and record. He went up there on his own initiative, and I think that was a very bold and courageous thing to do. Especially, with his thick, rural accent, to go to a major recording studio when he couldn't read a stop sign -- I'm sure he had to ask people how to find Columbia Studio or hail a taxi or something to get there and then ask for an audition -- it took a lot of courage in the mid-1920s.”

What also rings true for Rorrer is that the region’s homegrown music teaches and rebuilds a sense of authenticity -- often lost in the modern world.

“You should have the courage to follow through with your dreams and Charlie Poole wanted to try to make records,” said Rorrer. “…. he thought that his music had something to say and that there were people who would want and enjoy his music … I think that's a good example of following your dreams, and I think most young people have dreams about things they want to do and certainly they should follow through with them.”

P.I.C.K. Instructor Katie Griffin is a prime example of how local musical heritage can sprout into a bright musical future.

Griffin, who toured as a fiddler for several years with country music artist Kaitlyn Baker, got her start right here.

And now, the bluegrass fiddle competition winner at the Charlie Poole Festival, who has opened for the likes of Brad Paisley and Tanya Tucker, is excited to share her musical roots.

Griffin said she loves helping kids who find interest not only in the traditional music of the past, but what might lie ahead of them in the future.

“In the worst times of my life I could sit down and write a song, no matter what and pour my heart out,” said Griffin.

“I just want to bring that to some kids,” said Griffin. “I'm so happy to see that they are interested, because not only does it have good neurological benefits, but it also provides an emotional outlet and gives you a way to give back to the community. You can play in your church, you can sing happy birthday to grandma. You can make people happy with music and music can make you happy -- it's a two-way street. Giving that to kids is the best thing ever.”

While no stat can measure the impact music and its heritage can have on a youngster, the impact is clear in P.I.C.K. classes.

Just ask sixth-grader Brayden Porter, who was introduced to the P.I.C.K. program during this summer’s five-week virtual session.

Porter had hoped to be paired with the guitar, but was ultimately assigned the banjo.

And he ended up liking the sound of the banjo, and says he looks looks forward to playing it more in the future.

“I like the way that Kaleb, my teacher, always has at least some way to give us a smile,” Porter said. “I can’t wait for (classes) to start back up.”

While P.I.C.K. looks to expand in the future and continue its mission, the overarching goal of the program became quite clear this summer after a group of banjo students was asked why they want to learn to play the instrument.

“One young man said that it brings him peace,” Price said.

“The beauty of music is that it does just that -- yes, it inspires us and yes, it’s also fun -- but ultimately, it brings us peace.”

Another resident of Martinsville also dies from COVID-19.

REIDSVILLE – As the pandemic continues, many Rockingham Countians find themselves in need of vital food assistance.

Penn's 'Let Me Out' is cathartic country anthem for the pandemic

SURF CITY, N.C. — In the midst of a pandemic, musician and Madison native Vaughan Penn is experiencing a creative rebirth, looking for hope an…

Most every fall, folks in Rockingham County roll out the hay bales and construct charming and quirky sculptures to decorate for autumn. The tr…

A trio of young musicians practice fiddlin' and pickin' during a P.I.C.K. instruction session.

A young man studies the fretboard on his five-string banjo.