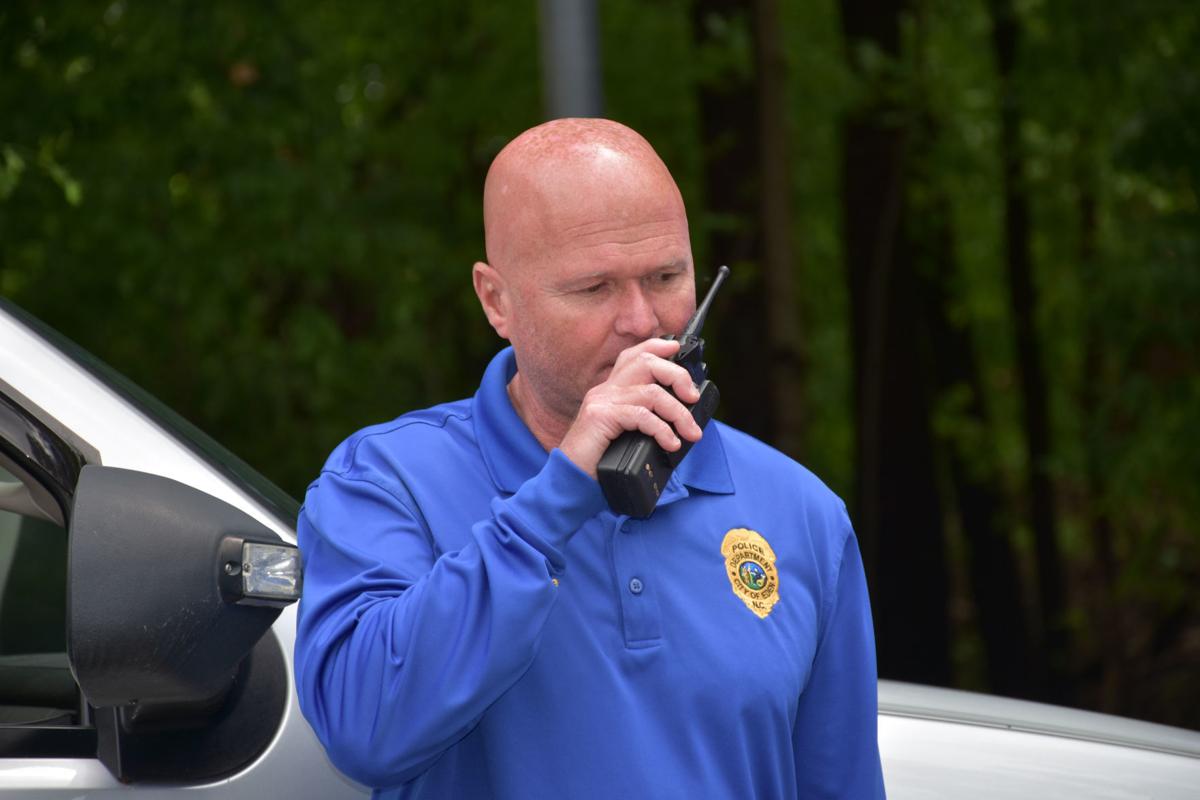 Greg Light makes his final radio call, signing off for the last time as chief of the Eden Police Department. 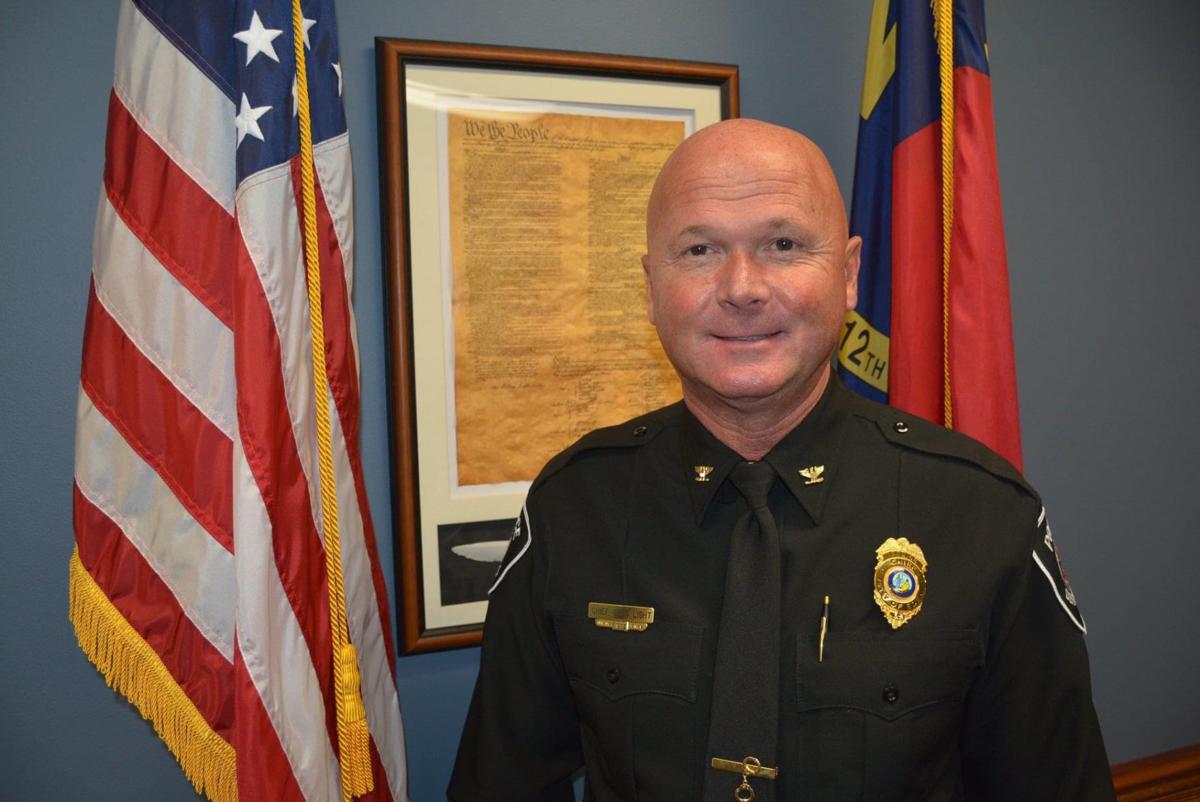 Eden Police Chief Gregory Clay Light prior to his retirement. 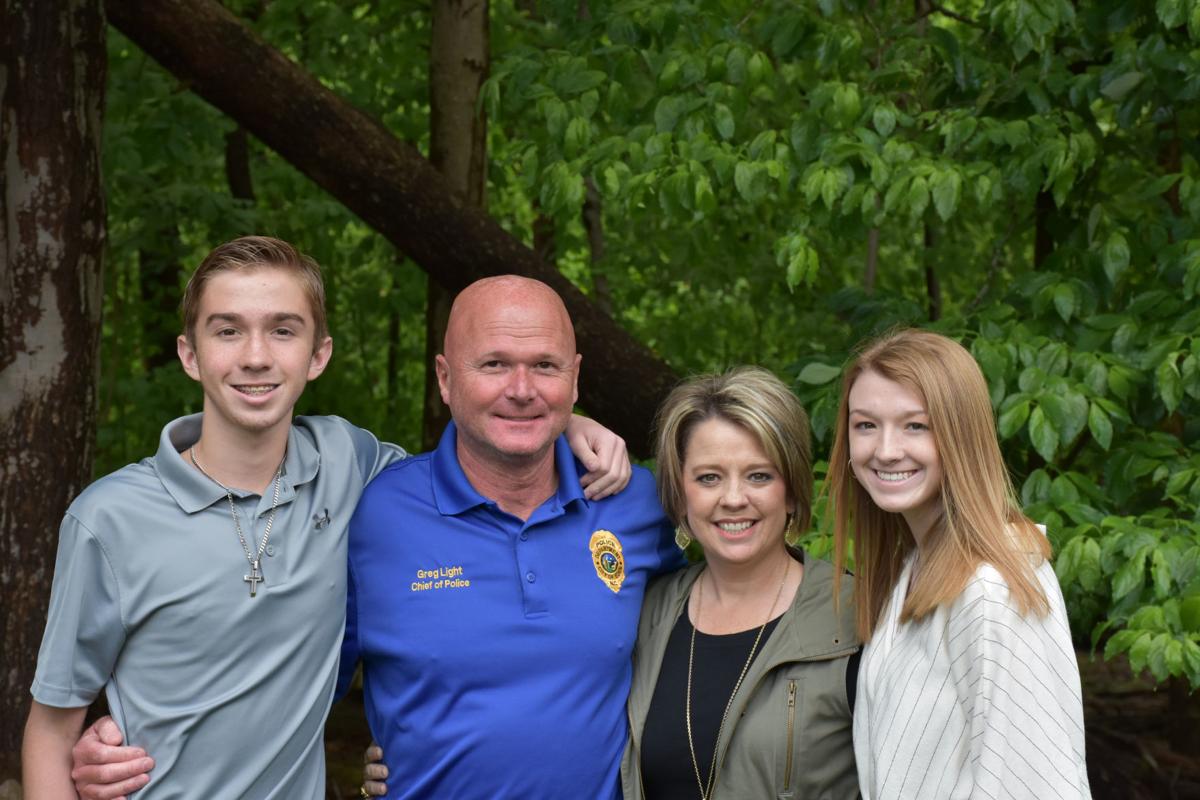 Light and his family, Adam (from left), Wendy and Hannah. 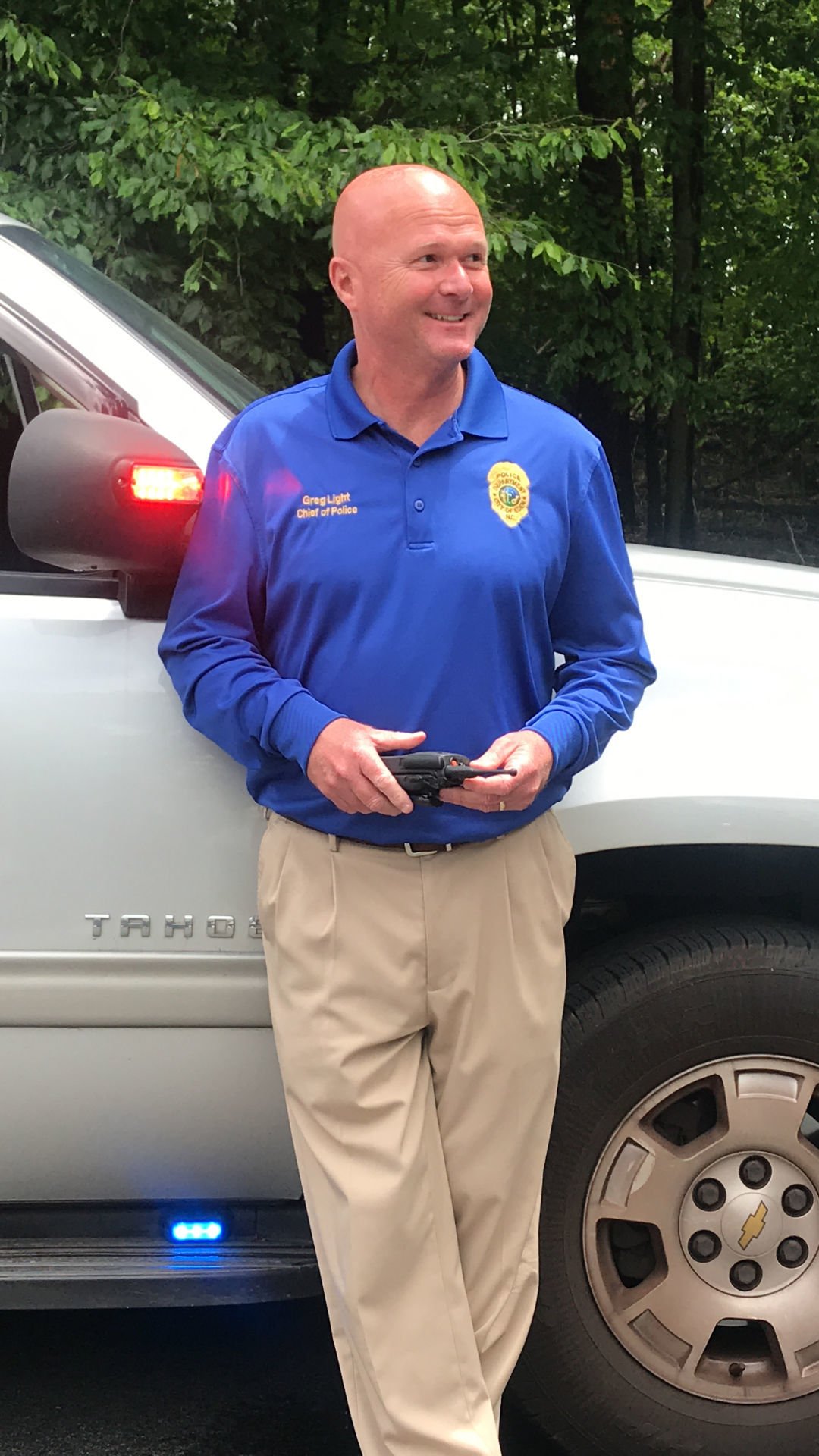 Retired Eden Police Chief Greg Light fights back tears after his final sign-off on May 1. 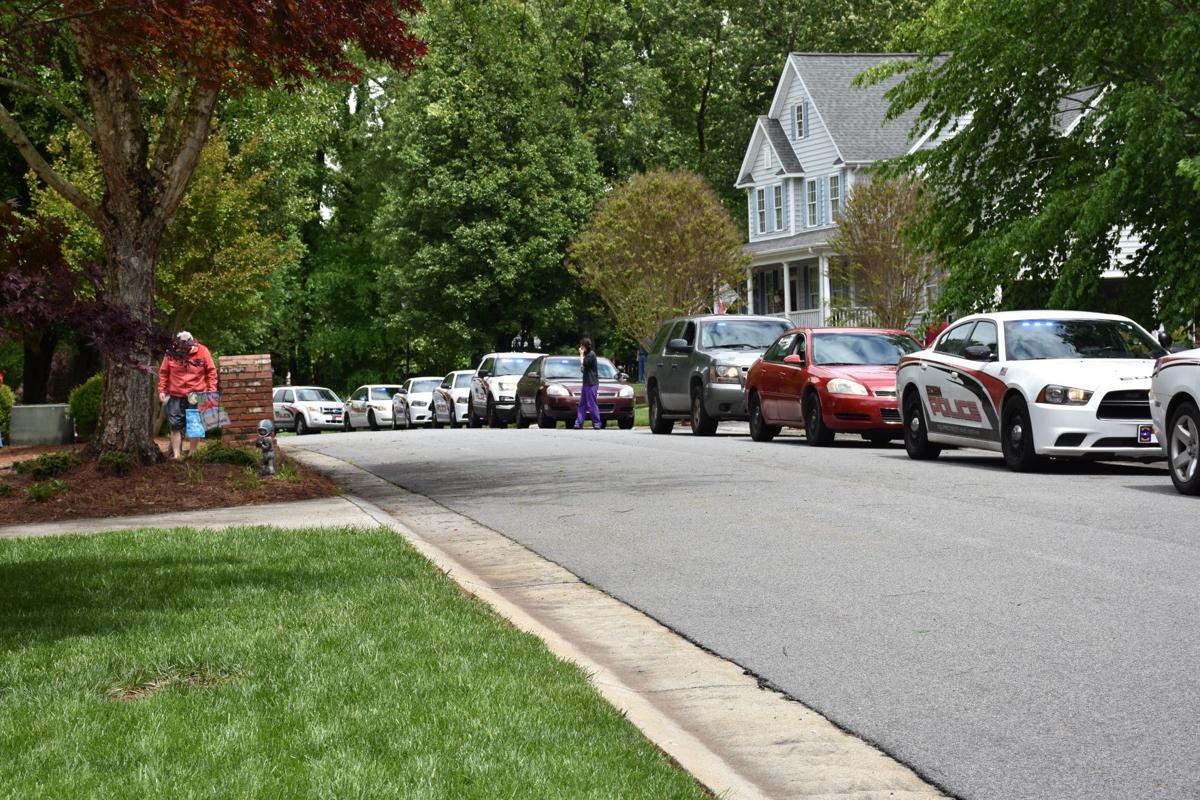 Greg Light was escorted by fellow workers, friends and family as he headed home in the last minutes of his 28-year career with the Eden Police Department. 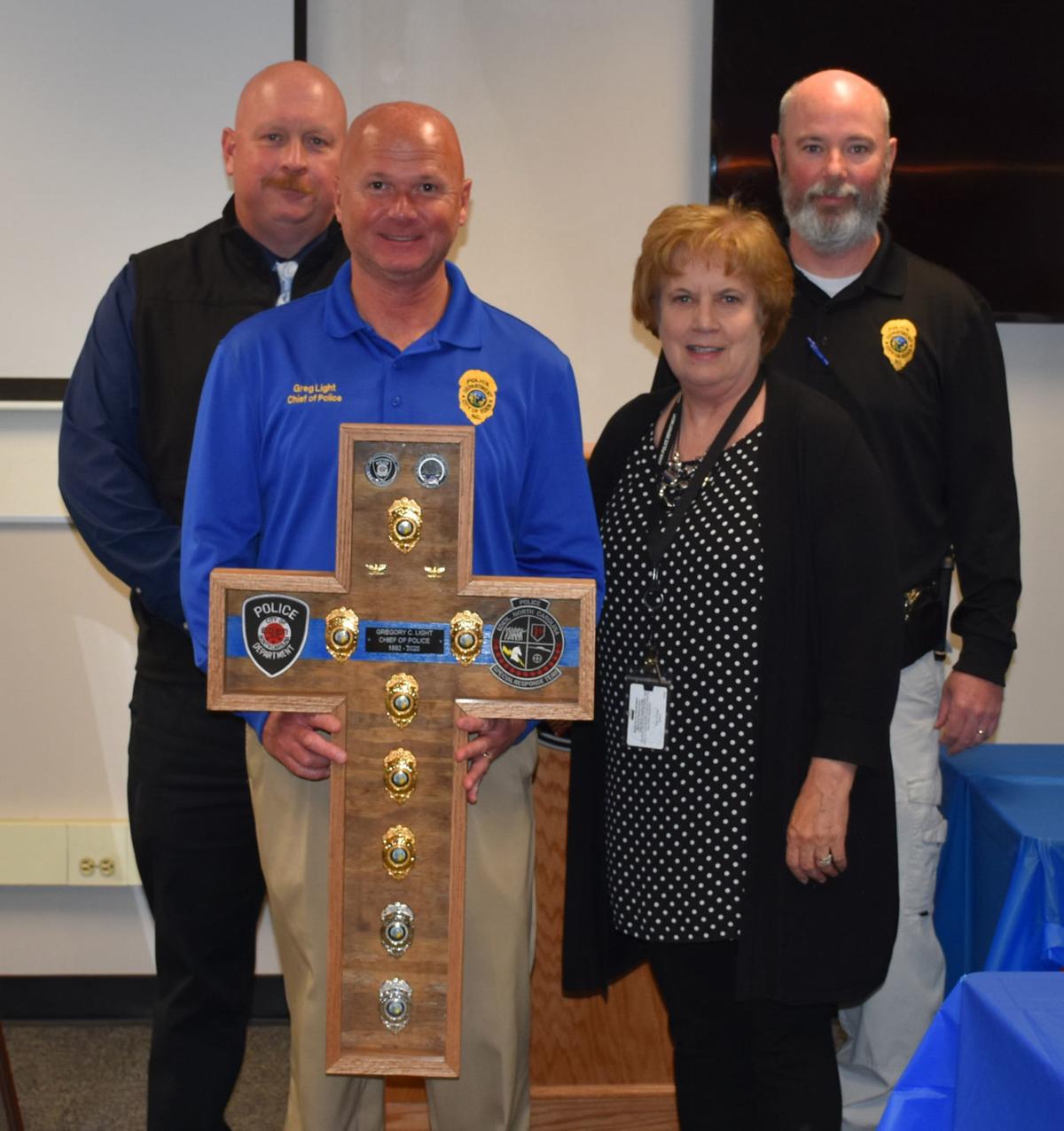 Greg Light holds a shadowbox displaying all his career badges and patches. With him are, from left, new Chief Clint Simpson, Administrative Assistant Mary Bennett and John Edwards. Bennett worked as Light’s administrative assistant for 26 of his 28 years. 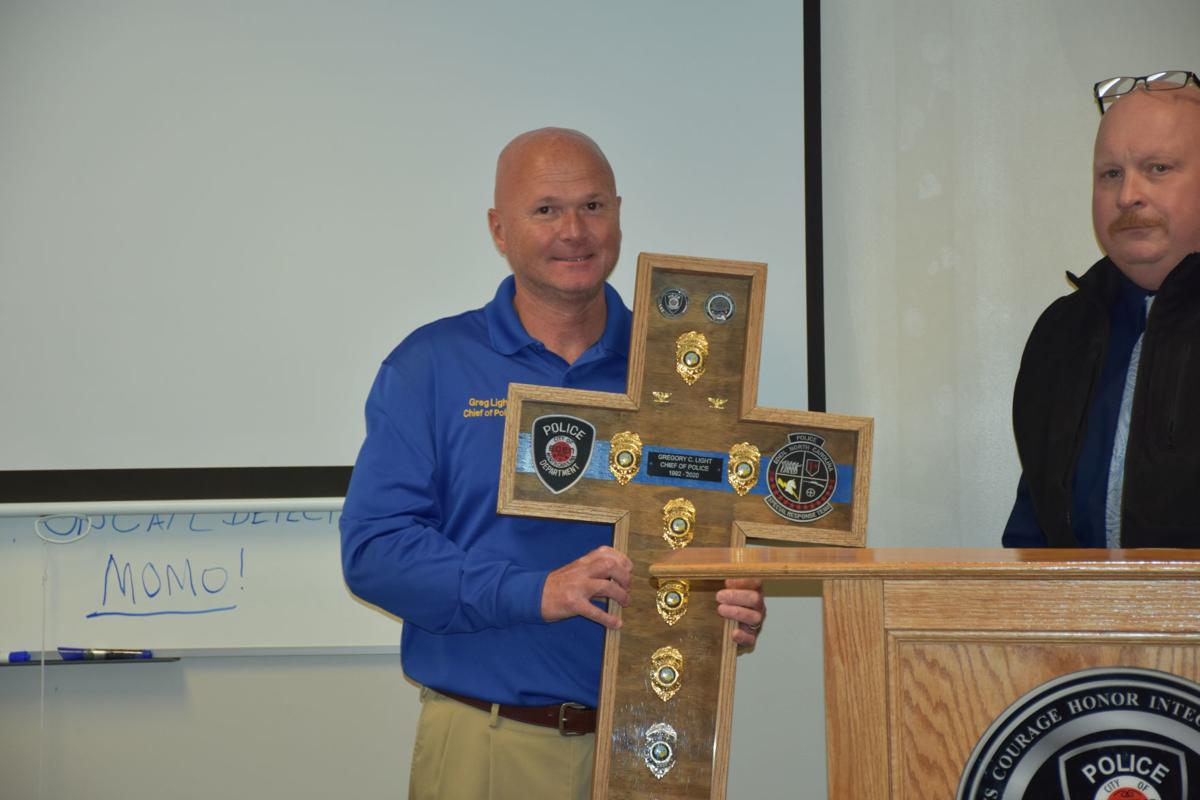 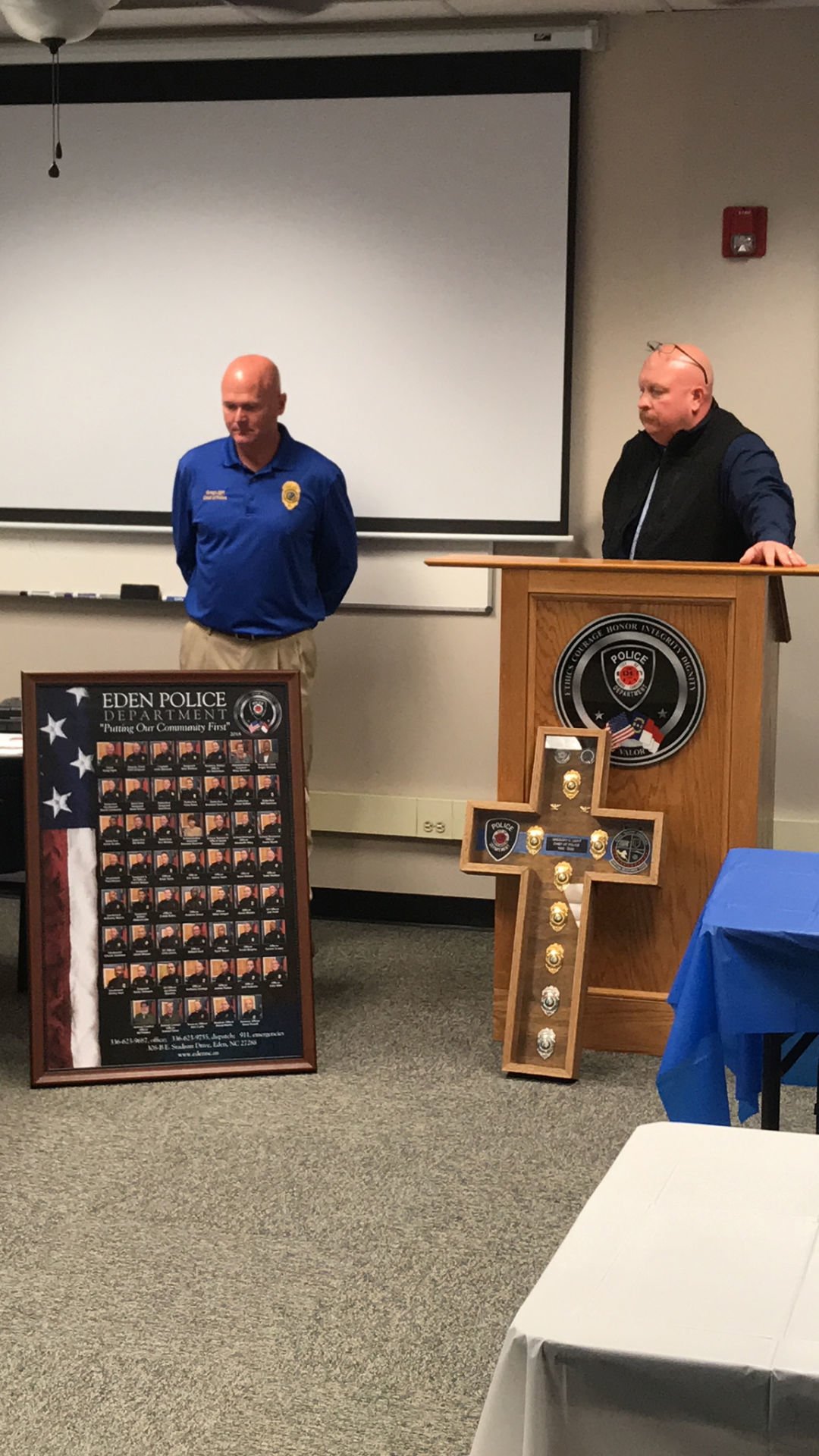 EDEN — While many in law enforcement say they wanted to be an officer from the time they were children, Gregory Clay Light found his path a different way.

His longtime friendship with retired Police Chief Reece Pyrtle led him join the department as a reserve officer before becoming a full-time officer in August 1992.

His career advanced over the years, with Light being named in January 2018 as Eden’s sixth chief to lead the Eden Police Department since the consolidation of the towns of Leaksville, Spray, and Draper in 1967.

On May 1, Light ended his 28-year career with the department. Now he is looking forward to spending more time with his family, not having to worry about missing birthdays, anniversaries and other important dates.

“I think Greg did an amazing job in serving the citizens in the city of Eden throughout his career,” Pyrtle said in a telephone interview. “Greg always cared a lot about the citizens he served and the people he served with.”

A retirement celebration planned in March was canceled and only a limited number of staff, friends and family could attend the May 1 event, that ended with a police escort home and Light’s final signoff as a member of the Eden Police Department. He fought back tears as he gave his final “10-42,” meaning, “Ending tour of duty.”

A native of Eden, Light is the son of Faye Ball Light and the late Rudy Light. He graduated from Morehead High School in 1986 and Rockingham Community College in 1990 while doing golf course maintenance part time at Meadow Greens Country.

He then accepted a position in mechanical engineering at Fieldcrest Mills, helping build looms for Oriental rugs. A reduction in force ended that job after two years.

“Two of us were the last ones in so we were the first ones out,” Light said.

At the time, two of his close friends, Reece Pyrtle and H.C. Phillips, were working for the Eden Police Department. One day, while Pyrtle and Phillips were visiting Light’s father, Pyrtle asked Light what he was going to do. Pyrtle then suggested he go to basic law enforcement training so Light enrolled in the BLET course at Guilford Technical Community College in Greensboro.

“And that’s how I became a police officer,” he said. “That just goes to show you how God has a plan for you. I can’t imagine doing anything else for now for my career. That’s how much I love police work.”

Light first worked as a patrol officer until he was transferred to the narcotics division as a detective. After moving to general investigations, he was promoted to detective sergeant, then advanced up the ladder to detective lieutenant, administrative captain and deputy chief under Pyrtle, who was named chief in March 2, 2009. When Pyrtle retired in January 2018, Light replaced his friend.

One of Light’s proudest career accomplishments was the creation of the department’s computer forensic lab while he was detective sergeant.

“Even though we are a small agency, we can analyze the hard drive in computers, cellphones, iPads — anything electronic that has a hard drive in it,” Light said.

The lab is now under the leadership of Detectives Erik Worley and Anthony Lovings.

“With this being in place, normally we would have to send the evidence to the SBI or FBI, and it saves us a bunch of time,” Light explained. “Anytime you can do any criminal investigation in house, it saves you time and it helps the victim and the district attorney by processing the investigation quicker.”

Even though the department has great relations with the state and federal agencies, they have huge caseloads so the turnaround could take two to six months, even for serious cases.

“Having the ability to access this data enabled the department to solve crimes faster and more efficiently,” Light said.

Light said that as result of that lab, he and his co-workers were able to stop a child predator, who was stalking children online.

Several years ago, Light received a call from a Spray resident about a man who had contacted her little girl online. Although he was portraying himself as a young teenager, he actually was a grown man, trying to solicit the woman’s daughter.

Working undercover in one of the chat rooms, Light connected with the man, pretending to be the child. The suspect “ended up coming to her house,” Light said. However, he and his officers had the house under surveillance and arrested him.

“In just interviewing him, it wasn’t just her as a victim but it was multiple victims throughout North Carolina,” Light said. He and an FBI agent obtained search warrants and traveled to Raleigh where they seized computer equipment and other materials leading to other victims. Until then, those victims were unknown.

“The victims felt like they were secure then, and called and talked to us about him,” Light said.

About 10 years ago, Light; Susan Hall, the director of Rockingham County Emergency 911; and Lt. Bill Roland of the Reidsville Police Department joined forces to write a grant for $7.8 million to enable all the departments in the county to use one dispatching system.

“It helped all the emergency services to have quicker response times,” Light said. “With the newer technology, communication between departments was easier and they could work together more efficiently.

“There were more employees in the 911 system so 911 calls were answered and dispatched quicker.”

At the time of his retirement, Light was serving on the N.C. Domestic Violence Commission (appointed by N.C. Senate leader Phil Berger, R-Eden), the United Way of Rockingham County, Help Inc. and the Eden Rotary Club. He also is a past member of the Eden Chamber of Commerce and is on the Community Baptist School Board until June 30.

Pyrtle played another important role in Light’s life when he and his wife, Val, introduced Light to Wendy Bullins of Reidsville. The couple married in November 1996.

Greg and Wendy Light have two children. Hannah, 19, is graduating from Rockingham Community College with two associate degrees and is a member of the honor society. She plans to transfer to High Point University to study to become a physician’s assistant in sports medicine. Adam, 14, is a ninth-grader at Community Baptist School in Reidsville. The family attends Community Baptist Church, where Greg will work part time as the athletics director at CBS, beginning July 1.

“I love our kids at our school,” he said, explaining he and Wendy have been running the school’s Upward basketball and cheerleading program for 11 years.

His family is the reason Light decided to retire after 28 years of service because law enforcement is a 24/7 job.

“In law enforcement, you miss a lot of things,” he said. “You miss birthdays, Christmas, graduations, a lot of special events because crime never stops.”

Often, he missed basketball games or soccer matches and even his wife’s birthday or their anniversary because of his work.

“She is the reason I was so successful as I have been in my police career,” Light said of Wendy. “She was always there for me and never griped or complained if I had to go to work and miss an important event with her or the children.”

As an example, Light said he was gone for 10 weeks while attending the FBI Academy in Quantico, Va. Although he only came home two weekends, “Wendy never complained” even though their children were small at the time.

The long hours also ate into precious family time. Light said he once worked a homicide on the east side of town for nearly three days without a break.

“Chief Benthin believed in my work ethic and was supportive of what I did and accomplished,” he said.

He and Pyrtle had been friends since childhood.

“Because of our friendship, we could disagree on things, but we always came to a conclusion for what was for the best for the department and the citizens,” Light said.

Pyrtle once said it was one of those friendships where they might disagree in the morning, but if one called for help, you would break your neck just to get to him.

“I have had an amazing career and have worked with some amazing officers who really care about each other,” Light said. “They are about community and its citizens.

“Our department is more than just a job. We are a close family at the police department.”

Greg Light makes his final radio call, signing off for the last time as chief of the Eden Police Department.

Eden Police Chief Gregory Clay Light prior to his retirement.

Light and his family, Adam (from left), Wendy and Hannah.

Retired Eden Police Chief Greg Light fights back tears after his final sign-off on May 1.

Greg Light was escorted by fellow workers, friends and family as he headed home in the last minutes of his 28-year career with the Eden Police Department.

Greg Light holds a shadowbox displaying all his career badges and patches. With him are, from left, new Chief Clint Simpson, Administrative Assistant Mary Bennett and John Edwards. Bennett worked as Light’s administrative assistant for 26 of his 28 years.