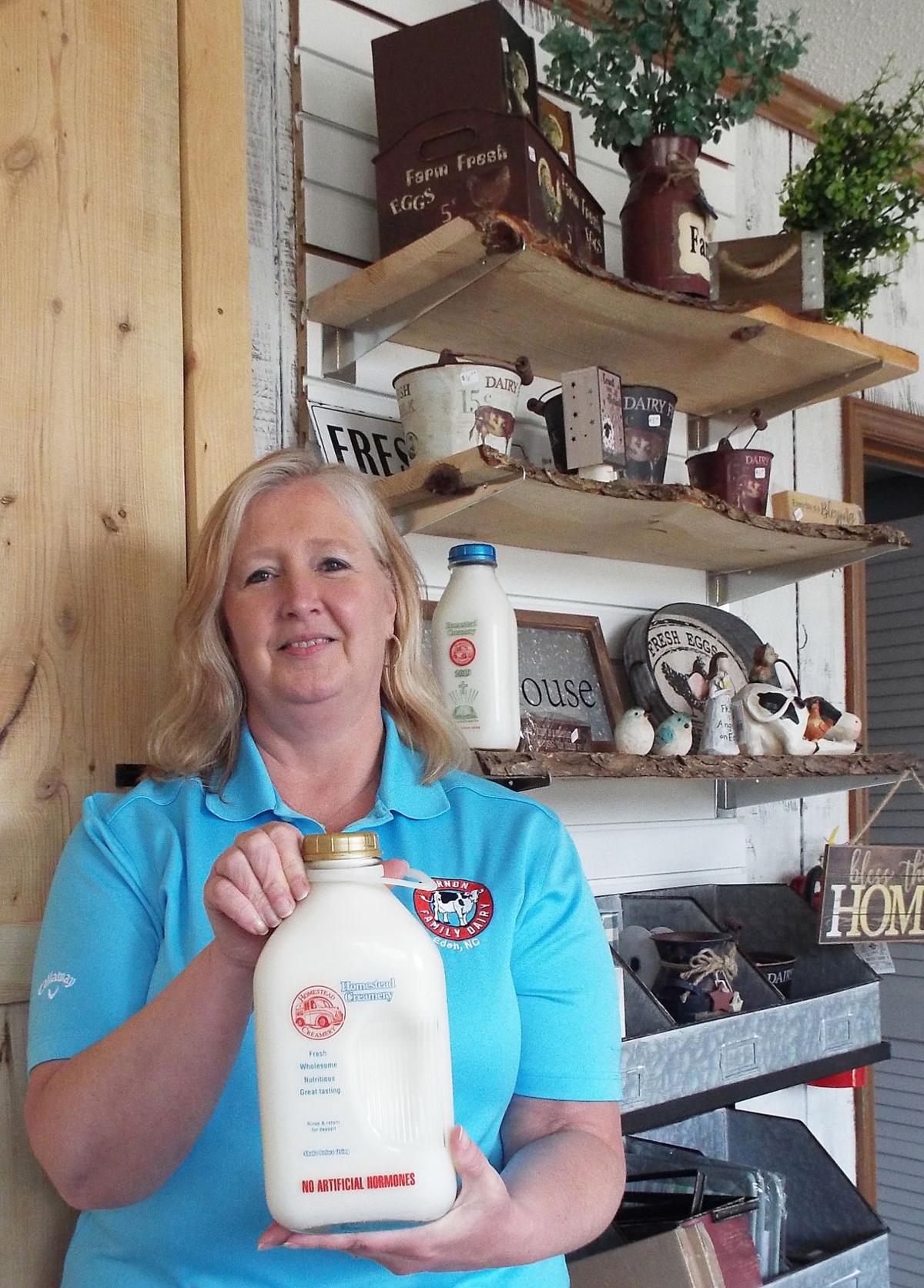 Keri Vernon holds a bottle of the non-homogenized creamery milk. Vernon’s family primarily distributes for Dairy Farmers of America, selling DairyPure and PET products in Rockingham and surrounding counties, including Henry and Pittsylvania counties in Virginia. 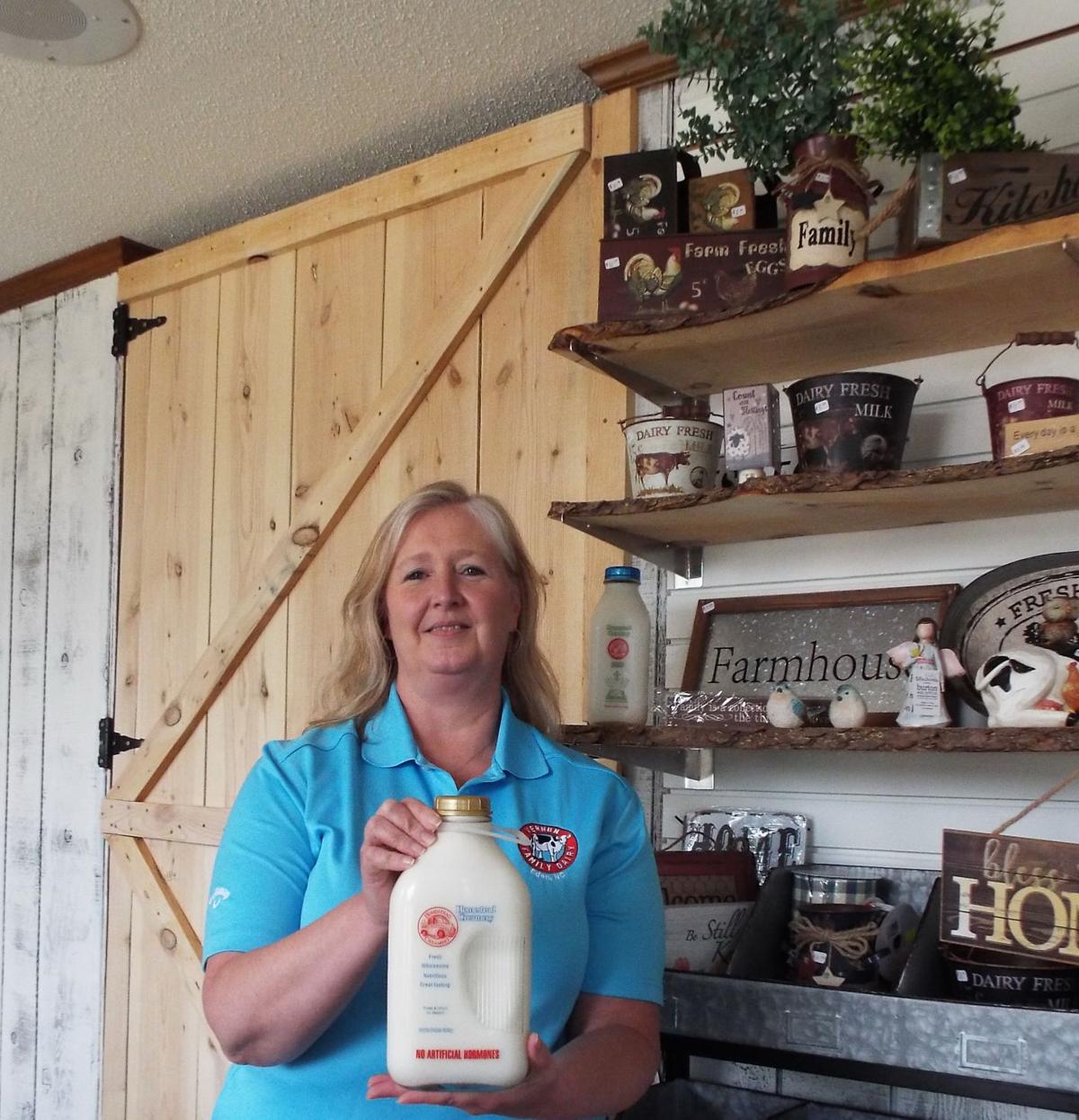 Keri Vernon holds a bottle of the non-homogenized creamery milk that brings back childhood memories when poured on cereal. In the background is the barn door created by her husband as a setting for Keri’s store featuring rustic farm and home items as well as special dairy products in glass bottles. 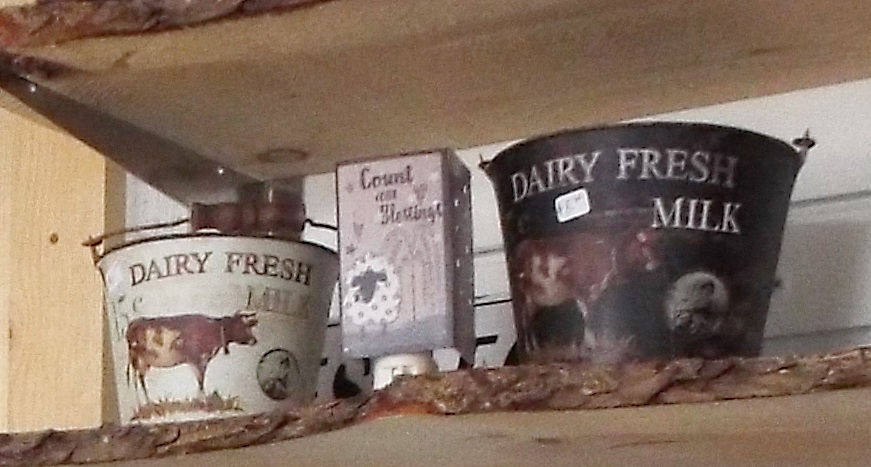 Keri Vernon holds a bottle of the non-homogenized creamery milk. Vernon’s family primarily distributes for Dairy Farmers of America, selling DairyPure and PET products in Rockingham and surrounding counties, including Henry and Pittsylvania counties in Virginia.

Keri Vernon holds a bottle of the non-homogenized creamery milk that brings back childhood memories when poured on cereal. In the background is the barn door created by her husband as a setting for Keri’s store featuring rustic farm and home items as well as special dairy products in glass bottles.

EDEN — One of my favorite treats as a child was a bowl of corn flakes in pure dairy cream. We got our milk from Bryant Paschal every Saturday morning.

My grandmother, Annie Kimbro Somers, put several gallon glass jars with money in one of them on the porch the night before. Plastic was not an option then.

Early the next morning, Mr. Paschal made his rounds, leaving jugs full of milk, buttermilk and butter home churned by his wife, Annie Lea.

Later, we switched to getting regular milk from the dairy but the same process was used. One or two days a week, my grandmother put the quart glass bottles, usually in a cardboard container made just for them, on the porch and put the money in one of the bottles. The milk was delivered early the next morning by Pine Hill Dairy. Mr. Paschal still brought our buttermilk and butter, though.

In those days, milk was not homogenized so the cream floated to the top of the bottle or jug: Pure cream filled with thousands of calories but, oh, so good! It made the best whipping cream in the world.

For breakfast, Mama Somers poured that thick, tasty cream over my cornflakes and added plenty of sugar to sweeten it. During the summer, she often topped the cornflakes with strawberries before adding the cream. No other breakfast food was better! Not even the plate-sized pancakes she made at least once a week.

Over the years, I really missed that special cream-topped breakfast treat. But I have created my own substitute blend. Although I normally drink fat-free milk, I just did not like using it on my cereal. I had too many memories of that fattening cream.

But I have adapted somewhat. I now buy a carton of Half-and-Half. When I eat cereal, I pour the bowl about half to three-quarters full of the Half and Half, then top it off with the fat-free milk. Occasionally, I buy 2% milk. I usually use whole milk when I bake pies and custards. If either of those is handy when I’m preparing my cereal, I reduce the amount of Half-and-Half in my cereal.

About a month ago, I was talking with Keri Vernon, owner of Vernon’s Family Dairy. They primarily distribute for Dairy Farmers of America, selling DairyPure and PET products in Rockingham and surrounding counties, including Henry and Pittsylvania counties in Virginia.

Recently, they partnered with Homestead Creamery in Wirtz, Va. That led to opening a small retail store in their building at 1003 Washington St. where they sell Homestead Creamery milk and ice cream products, as well as some DairyPure products and farmhouse décor.

Keri and her husband, Todd, were married in 2007 after meeting at church. He had been in the dairy business since 1995 and Keri soon became interested and opened her own business.

When I told her about my grandmother topping my cereal with pure cream, Keri said Homestead Creamery has non-homogenized milk available in glass bottles. The homogenization process is what keeps the cream from separating and floating to the top.

I was so thrilled. Vernon, who moved here from Stone Ridge, N.Y., in the 1990s, said this milk had to be special ordered and the orders are taken on Monday. Then, the milk is delivered on Thursday between 11 a.m. and 1 p.m. I also could buy other dairy products that had been hard to find during the pandemic. Keri took my order and said I could get the other items when I got there Thursday to pick up the special order.

When I arrived Thursday, I was disappointed to learn the cream product did not come in because the provider apparently was having trouble getting the glass bottles. However, I bought some buttermilk and eggs and a quart of ice cream.

The next week, I was excited about my creamy milk’s arrival. When I drove into the parking lot, an employee was on the loading dock. After I donned my mask and started across the parking lot, he met me and I told him I was there to pick up my milk order. He returned in just minutes with my glass bottle of non-homogenized milk.

It may sound silly but then those who know me will understand since I am a sentimental old lady! That glass bottle of milk looked so pretty and refreshing. It was icy cold as I took it.

I could hardly wait for morning to come. I fixed my cereal, putting chopped strawberries on top of it, and poured on the milk from the bottle. The only problem was, when poured from the small opening of the bottle, the cream floated back into the bottle and mixed with the milk so I didn’t get my pure cream.

Although, the cream wasn’t on top, the flavor almost made up for that. It probably was the sweetest, best-tasting milk I had in years.

Yes, I was disappointed about the cream, but my cereal that day was the most delicious I had eaten in a long time — thanks to that tasty non-homogenized milk.

And I solved the problem of keeping the cream on top by pouring the milk into a wide-mouth pitcher. The cream wasn’t as plentiful as it had been in the “good old days,” but the overall effect and taste were there. The next morning, I spooned it off onto my Rice Krispies and enjoyed my trip down memory lane.