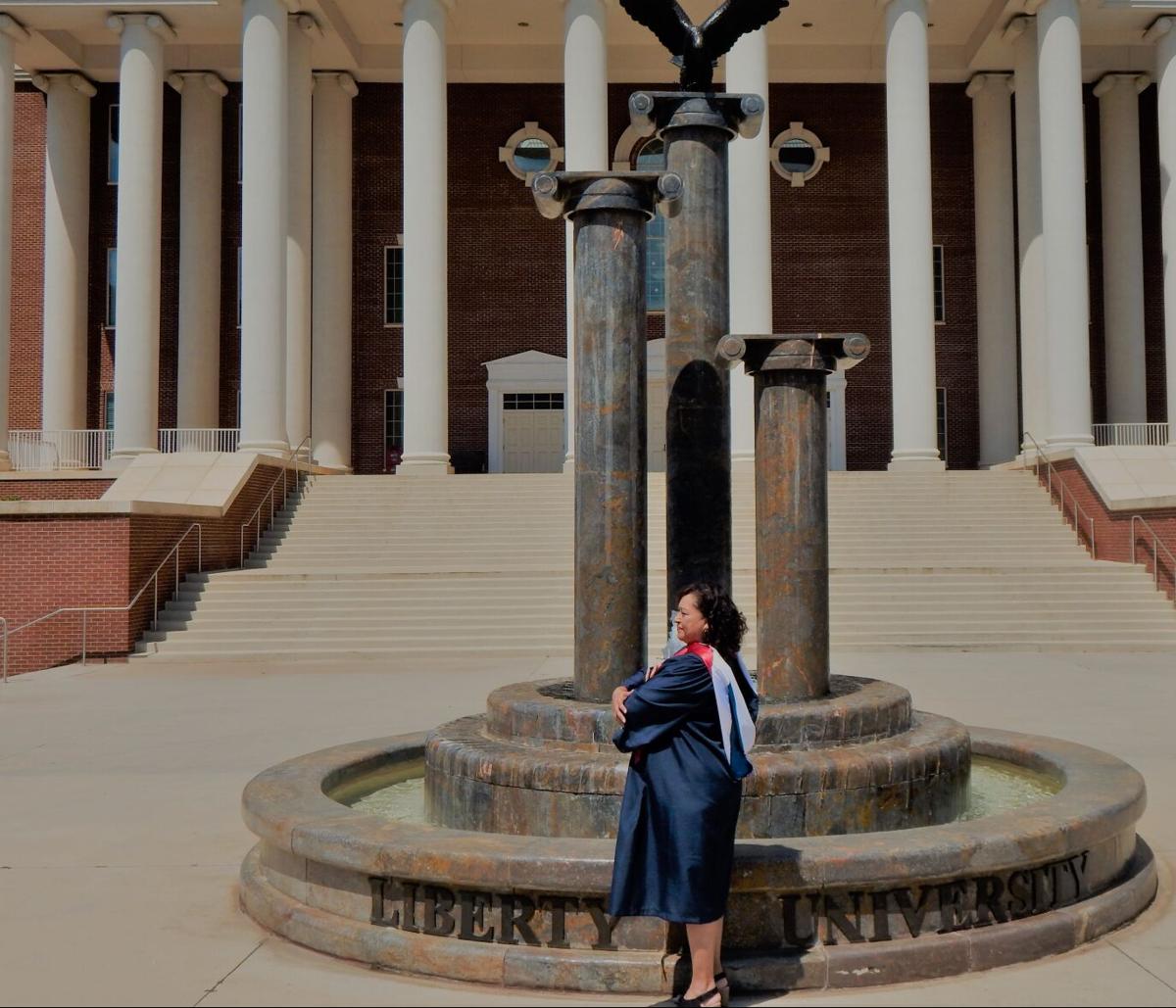 Anita Wilkerson has a pensive moment in front of DeMoss Hall at Liberty University. 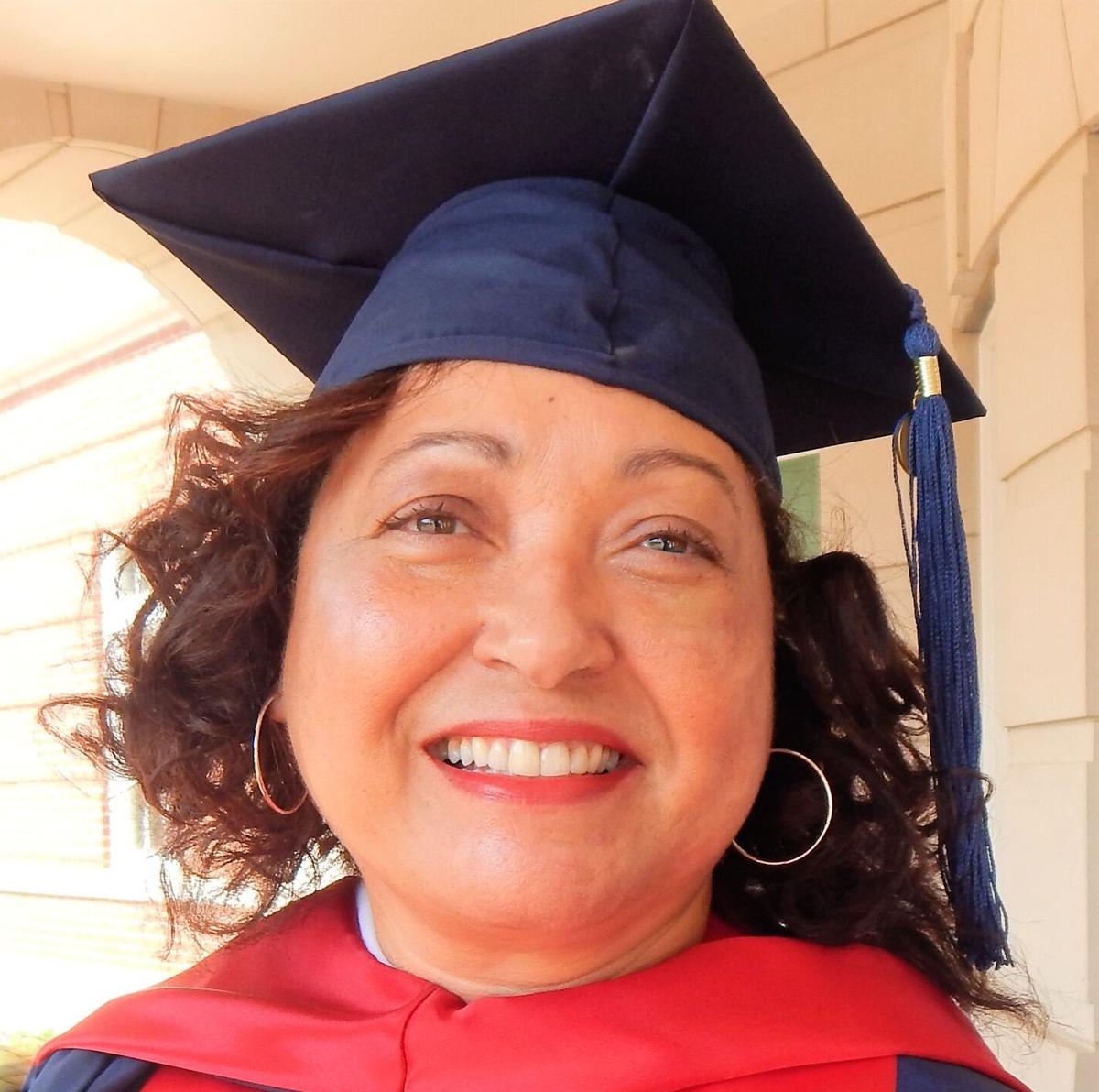 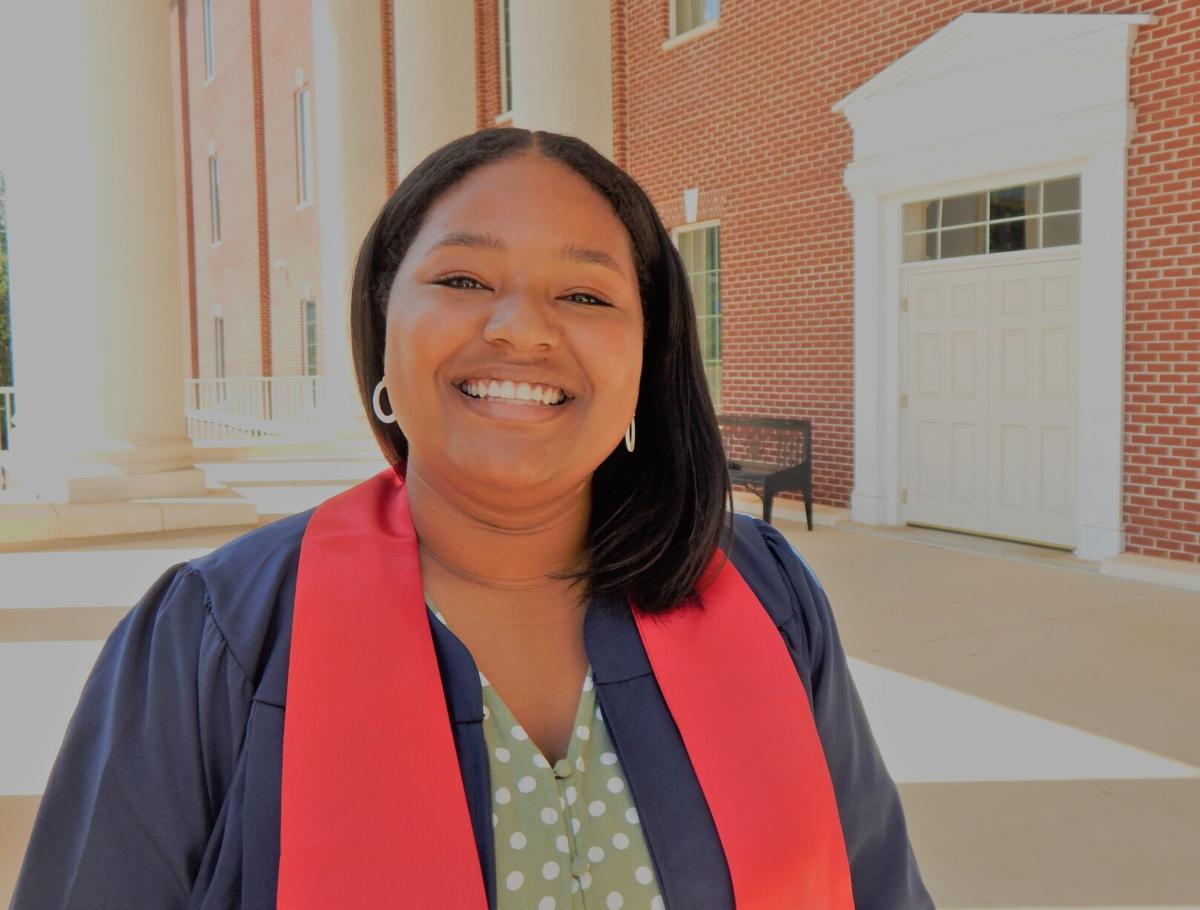 Ashlea Johnson in her cap and gown at Liberty University. 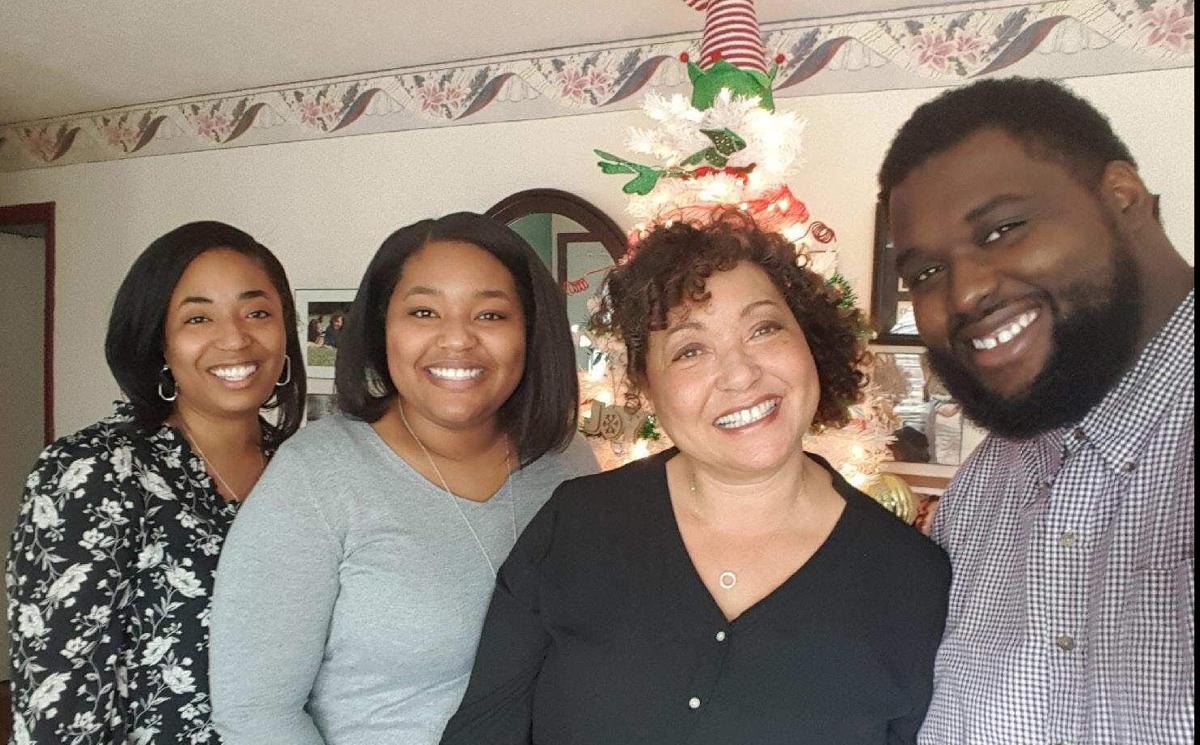 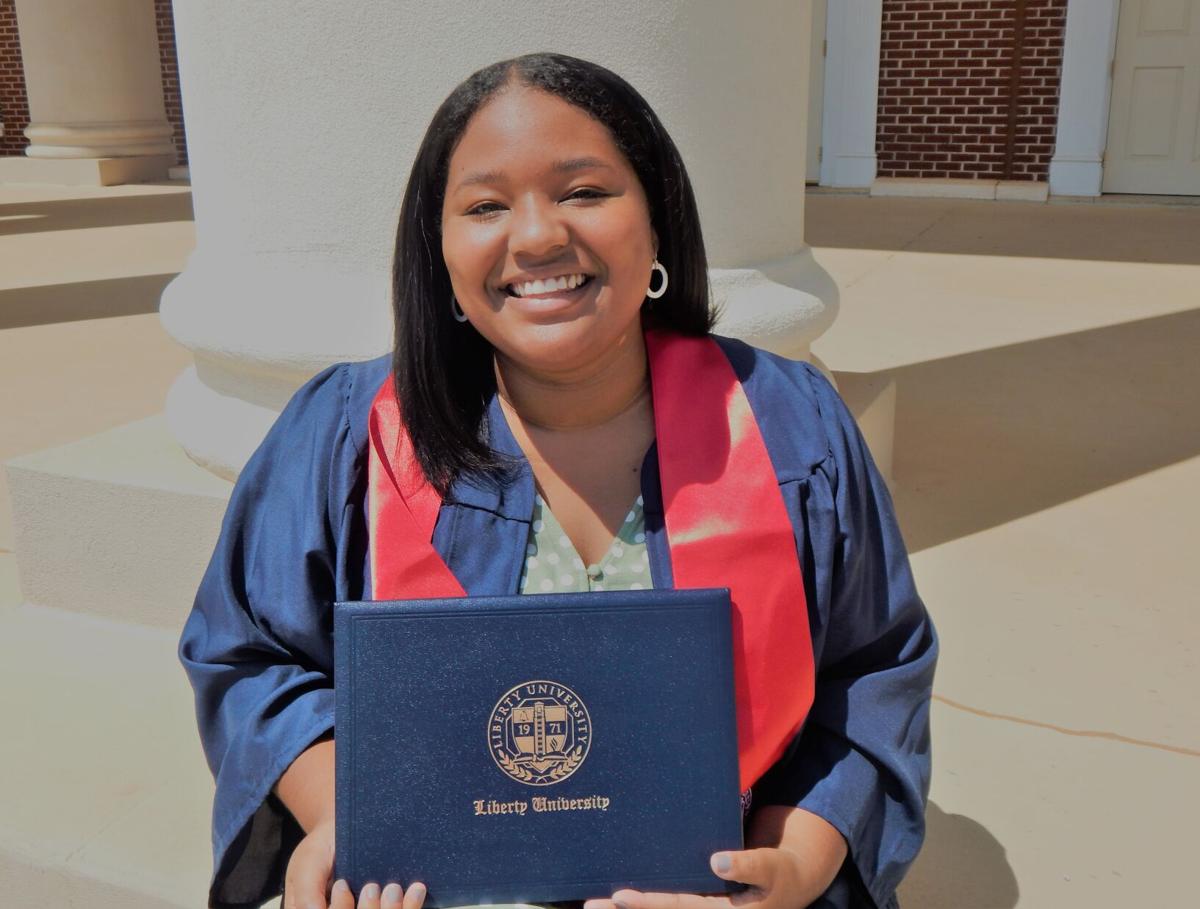 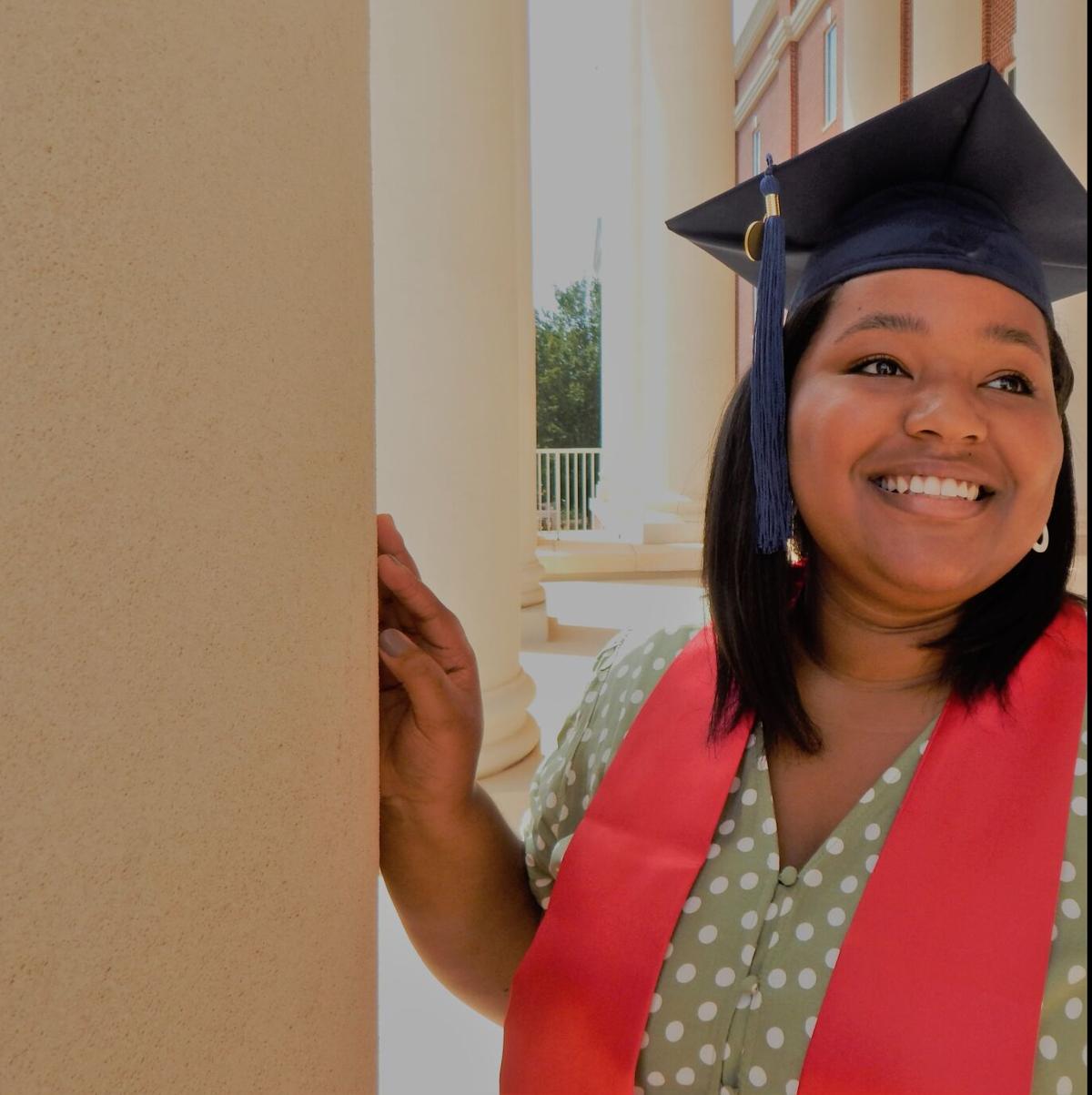 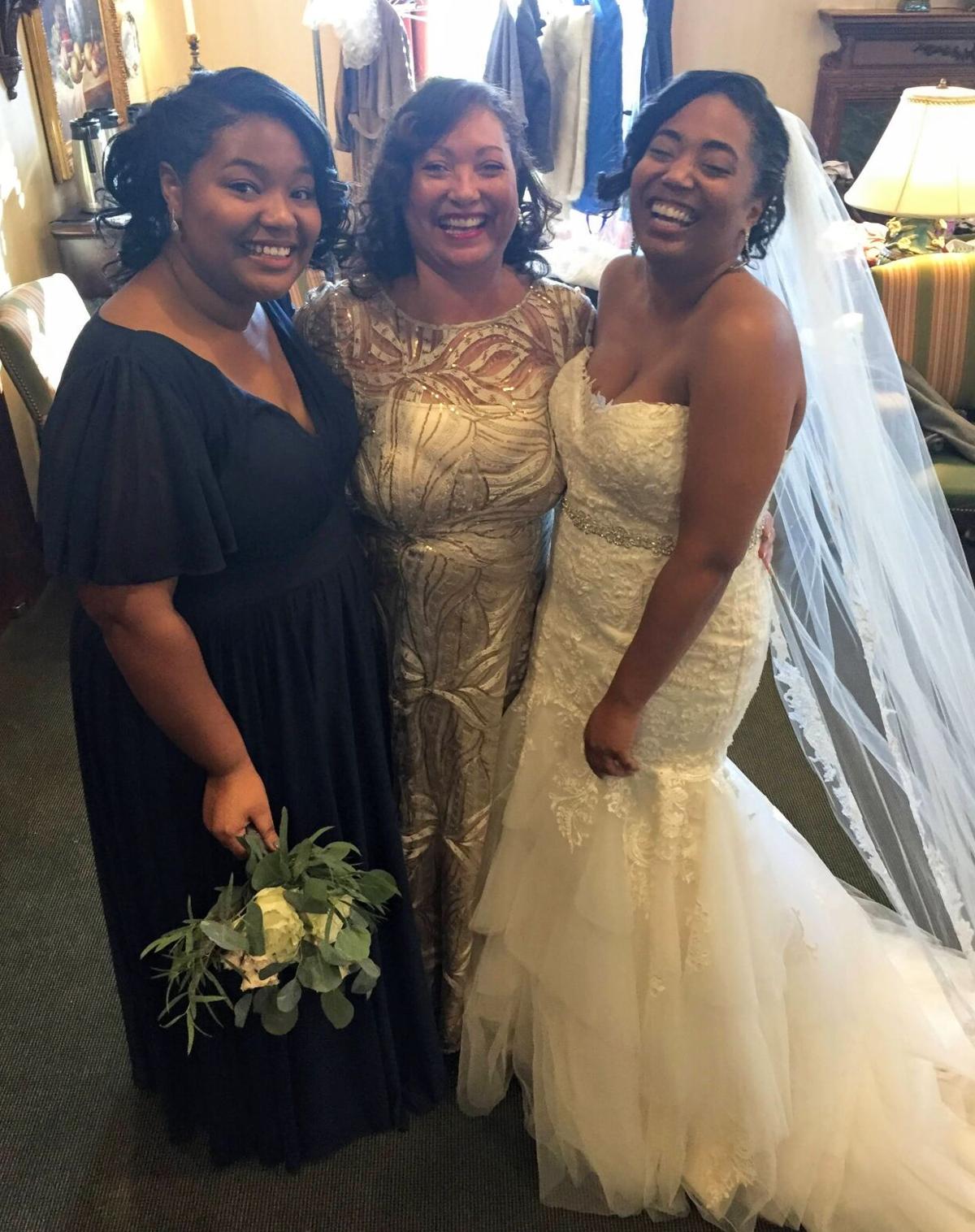 Ashlea Johnson (left) and Anita Wilkerson share a happy moment with Alisha as she gets ready for her November marriage to Winfred Locus. 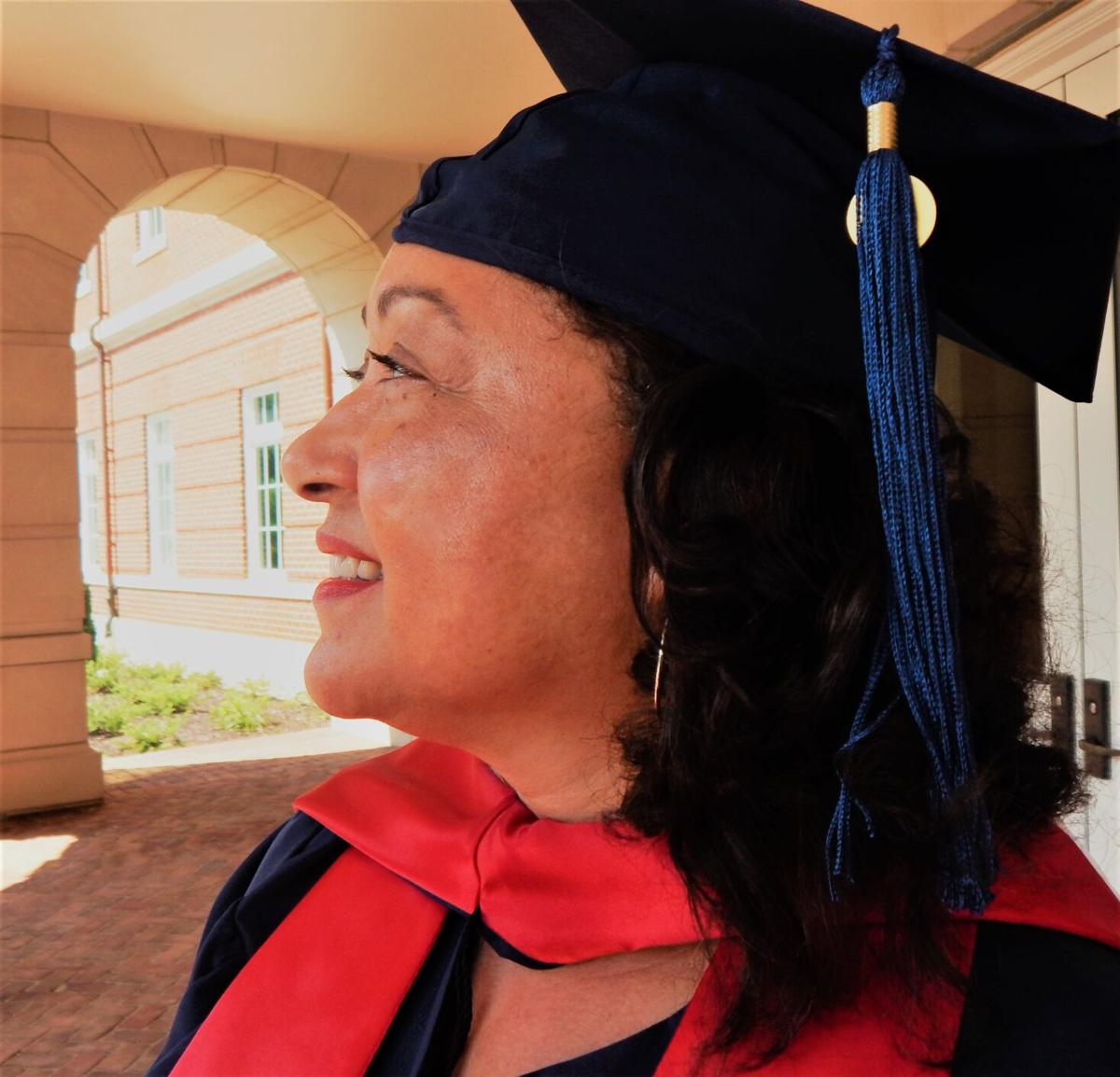 These are just some of the feelings Anita Joy Wilkerson grappled with when she failed a final math test last fall en route to her earning her psychology, business and religion degree from Liberty University in May.

Wilkerson literally burned the midnight oil often in the four years it took to earn her online degree from Liberty University.

She shed a lot of tears and quit many times but the support from her family kept her on track, Wilkerson said. She was determined to walk across the stage with her youngest daughter, Ashlea Johnson, 23, a full-time student at the campus in Lynchburg, Va.

The coronavirus pandemic prompted commencement exercises to be postponed until the fall. Everyone hoped the virus would be under control by then. However, in late August, the mother and daughter learned their dreams of graduating together would not happen. The ceremonies were canceled.

“There is no way we are going to graduate with the class of 2021; that’s too many students, so this is over,” Wilkerson said recently after Liberty offered this year’s graduates the option of participating in next year’s ceremonies.

Forty-one years after dropping out of Rockingham Community College because of financial reasons, Wilkerson thought she finally would realize her dream of getting her college degree.

“How often do you hear about a 60-year-old Black woman from Eden graduating with a bachelor's degree alongside her daughter?” Wilkerson asked.

A native of Eden, Wilkerson was next to the youngest in a family of 13 children of the late Reid and Odessa Wilkerson.

“My parents worked hard to provide food and shelter for us but we didn’t have a lot of extras,” she said. “We were raised with a lot of love and fended for each other. We were poor, and had no outside sources to advise us about financial aid for furthering our studies.”

While at Morehead High School, Wilkerson participated in the Job Training Partnership Act, working as secretary for the school’s ROTC program. After graduating in 1979, Wilkerson earned her two-year secretarial science degree from Rockingham Community College. For several years, she worked at Morehead Hospital before becoming a case worker with the county social services department. In 2002, Wilkerson transferred to the Child Support Agency in Greensboro, where she works today.

In addition to her regular job, Wilkerson also works on Election Day and for early voting for the county board of elections. She attends Faith Family Ministry in Wentworth.

Wilkerson has another daughter, Alisha Locus, 33, who married in November and lives in Greensboro.

After graduating in 2016 from Rockingham Early College High School, Ashlea Johnson enrolled at Liberty University, majoring in psychology with a concentration in counseling and minoring in Biblical studies and youth ministry.

Now, she hopes to pursue a career in marriage and family therapy by starting work online in the spring for her master’s degree. While doing this, she hopes to gain work experience in her field.

“I haven’t had a lot of experience with the job world,” Johnson said. “I didn’t really know what to expect going into this with COVID-19. Finding things in my field so I could get some experience was hard even before COVID.

“It’s hard to find a job now because they want experience,” she said. “Navigating that is hard.”

Missing the graduation ceremonies was disheartening “because I had planned to meet up with a lot of friends I hadn’t seen in a long time and have a reunion with them that weekend. I was really sad,” Johnson said of the canceled ceremony. “I understand why they canceled it.”

But, it was disappointing when mother and daughter didn’t get to walk across the stage and do the commencement things together.

But they have donned their caps and gowns and had a private ceremony at home. One day recently, they drove to Liberty and took pictures in front of a lot of the buildings.

Wilkerson said the day she received her diploma in the mail “was a relief. I was proud of myself. I did what most people my age wouldn’t. It was a big deal.”

Earning their degrees together was special for them.

“She worked harder to get her degree than I did,” Johnson said. “She has been out of school for so long and things have changed so much.”

Johnson watched as her mother had to learn how to submit assignments, attach files on emails, and advocate for herself with her professors, all the while navigating the course materials and web pages.

A lot of Wilkerson's assignments were week-to-week with classes starting one Monday and ending the next Monday night.

“My weekends were pretty much studying all day Saturday and all day after church Sunday,” Wilkerson said. “Mondays, I was up until midnight a lot of times and had to get up at 5:45 the next morning to go to work in downtown Greensboro.”

“Doing online classes was probably the biggest hurdle for her,” said Johnson, adding that her mother often called her at school for help in submitting assignments or figuring out certain math problems.

“I had to tell her she had to figure it out on her own,” Johnson said.

There were times when frustration got the best of Wilkerson, who questioned whether the pursuit of this degree was worth it.

Those are the times when Johnson told her mother, "You can’t give up now.”

Last fall, when Wilkerson failed a math class, was the toughest moment.

“That did it for me. I cried,” she said. “I was really disappointed at myself and I felt incompetent. I beat myself up because I am almost at retirement and I failed a math class. It was a disappointment to actually get a failing grade. I was going to give up.”

Wilkerson's daughters kept encouraging her, telling her she was right at the end and she needed to just retake the course and move on.

Alisha’s husband, Winfred Locus, an engineer at A&T State University, provided a lot of encouragement and bought Wilkerson a new laptop to make her studies easier.

“I couldn’t give up because of them,” Wilkerson said of her family.

Johnson is beyond proud of her mother's determination and persistence:

“For her to go after a goal like that shows it doesn’t matter how old you are, what you don’t know, how much you do know, and how long you have been away from your plans, you still can accomplish anything if you set your mind to it.”

REIDSVILLE - When his longtime relationship with his girlfriend was faltering, Otis Foster says he was coerced into an argument with her that …

Anita Wilkerson has a pensive moment in front of DeMoss Hall at Liberty University.

Ashlea Johnson in her cap and gown at Liberty University.

Ashlea Johnson (left) and Anita Wilkerson share a happy moment with Alisha as she gets ready for her November marriage to Winfred Locus.