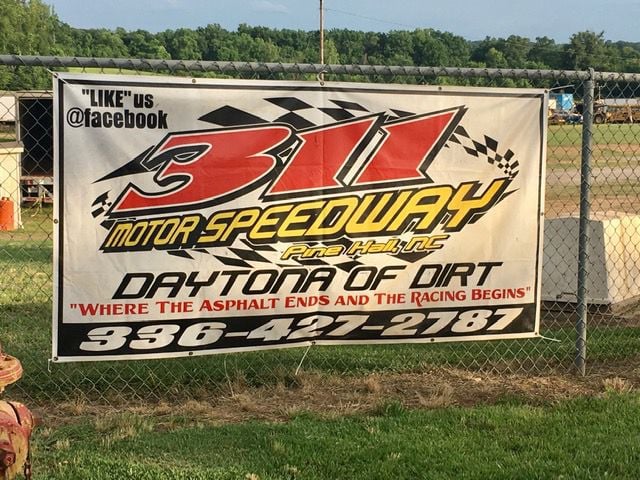 311 Motor Speedway, owned by Mike Fulp, is a half-mile dirt track in Stokes County, near the Rockingham line.

Fulp listed "Bubba Rope" for sale on his Facebook page amid the recent Bubba Wallace controversy. A door pull shaped as a noose was recently found in the Talladega Superspeedway garage of NASCAR's only full-time black driver, Bubba Wallace. 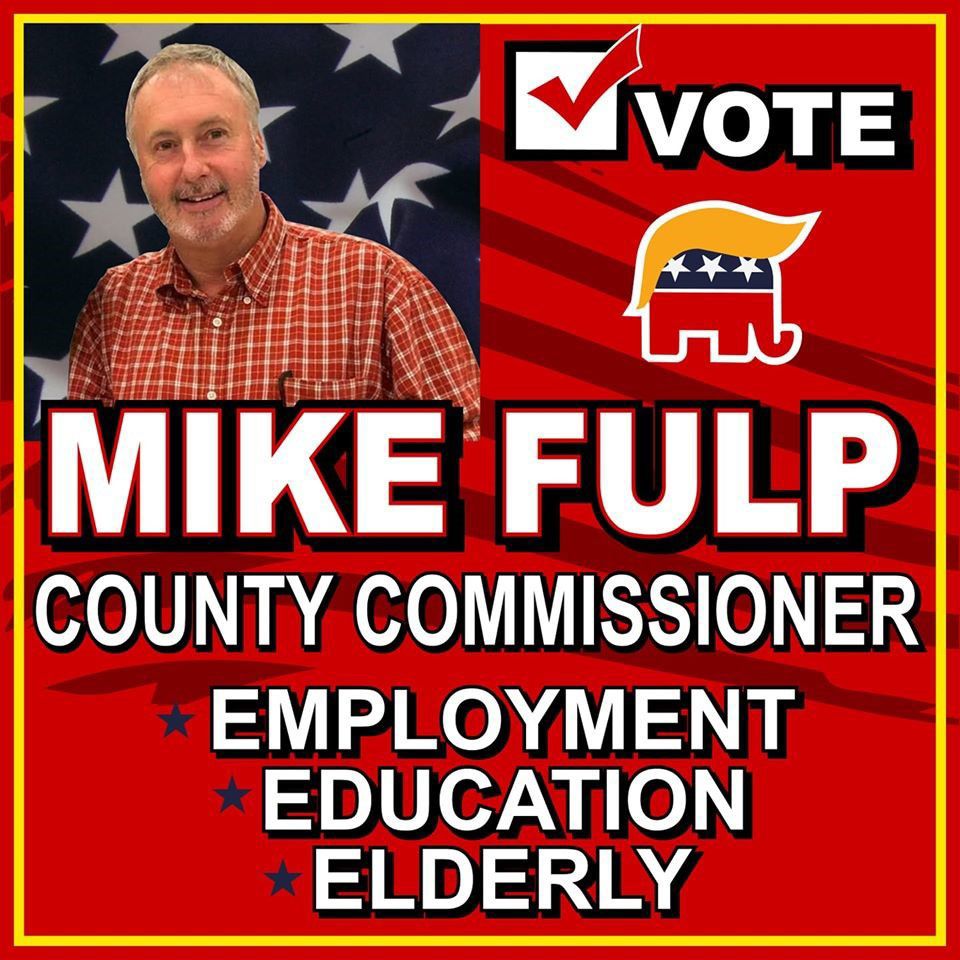 Fulp made a failed bid as a Republican for a Stokes' County Commisser's seat in the last election.

STOKES COUNTY — The owner of 311 Speedway here advertised “Bubba Rope” for sale on a Facebook page in the wake of controversy surrounding NASCAR driver Bubba Wallace's announcement that a noose had been found in his garage at Talladega Superspeedway.

In the ad, Mike Fulp, 55, of Lawsonville, who owns the half-mile dirt race track near the Rockingham County line, listed “Bubba Rope’’ for sale with a pitch: “Buy your Bubba Rope today for only $9.99 each, they come with a lifetime warranty and work great.’’

Wallace, NASCAR's only full-time Black driver, learned this week through an FBI investigation that a door pull fashioned as a noose had been in place at the Alabama raceway since at least October.

"This incident of racism is horrific and shameful,'' said Ford Porter, the governor's deputy communications director. "North Carolina is better than this.''

Local Black leaders were outraged, with Reidsville NAACP chapter president Jeff Crisp saying he has contacted the state director of the NAACP about seeking criminal charges against Fulp.

“It is horrible that someone would post something of that nature,'' Crisp said after reviewing the post.

"It's just absolutely unnecessary in these times of tension,'' Crisp said, pleased that many of Fulp's Facebook friends wrote objections to the post. "You go back to slavery days and hanging people and calling them 'strange fruit' on the trees because there were so many slaves hanged. This is not the time for comments like this, just causing unnecessary tension.''

Indeed, Fulp's post inflamed plenty of people who follow him on Facebook. Several who described themselves as loyal spectators wrote to Fulp that they would stop attending 311 events because of the post. Other people shared screen shots of nearly a dozen of Fulp's older Facebook posts, since deleted.

In one he writes: "We've really been bad people. I think we should give them a bucket of Kentucky Fried chicken, 2 watermelons and a plane ride back to Africa.''

Another post features a photograph of George Floyd, who died last month at the hands of Minneapolis police, with a caption: ''Congratulation, George .... 2 weeks drug free.''

Fulp, who made a recent failed bid as a Republican for a Stokes County Board of Commissioners seat, could not be reached for comment. Two phone numbers associated with his name were not in service Wednesday night. He also owns Hillside Dan River Tubing in Walnut Cove.

The Wallace incident at Talladega prompted a probe by the Federal Bureau of Investigation. The agency ruled that no federal crime had been committed and that Wallace had not been the victim of a hate crime. NASCAR announced Thursday that it could not determine who put the rope in place but released a photo and said its investigation had ended.

In a show of solidarity with Wallace, NASCAR drivers spoke out against racism and marched alongside his car as it moved to the front on pit road before Monday's GEICO 500 at Talladega. North Carolina racing great Richard Petty, for whom Wallace drives, attended the race and stood with Wallace.

Wallace, amid the national outcry for an end to racial discrimination and police brutality in response to Floyd's death, successfully lobbied in early June for NASCAR to prohibit fans from displaying Confederate flags at its events.

Fulp, though, encouraged fans through Facebook to wave the Civil War emblem.

On Wednesday, he posted an invitation there, asking spectators to buy and display Confederate flags at his raceway’s “Heritage Night’’ on Saturday, despite state laws barring outdoor gatherings of more than 25 people during the pandemic. Cooper this week announced an extension of Phase 2 of the state's reopening plan.

It is incumbent on local law enforcement to see that the speedway follows the law, Cooper's spokesman said.

"As to the operation of the raceway, the mass gathering limit should be enforced by local authorities to prevent the spread of COVID-19,'' Porter said.

Fulp, in announcing the upcoming event, wrote, “We believe it’s our right to protect the sport we love. Purchase your Confederate flags and caps here, along with your Christian flag, American flag, Donald Trump flag and caps.’’

He encouraged fans who choose to wear masks to don them and wrote that the speedway will provide hand washing sinks and hand sanitizer. He ended the post with: “And don’t forget your 2nd Amendment right, 311 Speedway.’’

While it is unclear whether Fulp’s post advertising “Bubba Rope” meets the standard to constitute a federal hate crime, the message inspired some to circulate petitions to boycott the race track. The NC Beat, a Facebook page with news and information about hate crimes, urged people on Wednesday to alert the FBI to the Fulp post.

Staff at the U.S. Attorney's Office in Greensboro were unavailable for comment.

“There are some with hateful, racist spirits among us,’’ said Allen, who as a student at N.C. A&T in the early 1960s participated in the Woolworth sit-ins in downtown Greensboro.

“But the good thing about it is to see the solidarity of all of those race car drivers, marching behind Bubba on the speedway. That lets us know that the majority of us are good people, kind people and on the same page,’’ Allen said.

“A lot of the time, people do things for attention. And we cannot satisfy and serve their agenda by playing the game with them,’’ he said, discouraging acts of retribution.

“It’s good to know who they are and where their heart is, but it’s better to look at the bigger picture … ,’’ Allen said. “When we see injustice, we need to point it out. It needs to be dealt with, but in a peaceful way.’’

Ethan Joyce: Continuing the conversation on Bubba Wallace, NASCAR and sensitivity to symbols

Updates at 12:35 p.m. Thursday with Tweet showing NASCAR image of noose in garage at Talladega Superspeedway:

The noose found hanging in Bubba Wallace’s garage stall at Talladega Superspeedway had been there since at least last October, federal authori…

After a tumultuous week, 311 Speedway is losing some partnerships.

311 Motor Speedway, owned by Mike Fulp, is a half-mile dirt track in Stokes County, near the Rockingham line.

Fulp listed "Bubba Rope" for sale on his Facebook page amid the recent Bubba Wallace controversy. A door pull shaped as a noose was recently found in the Talladega Superspeedway garage of NASCAR's only full-time black driver, Bubba Wallace.

Fulp made a failed bid as a Republican for a Stokes' County Commisser's seat in the last election.