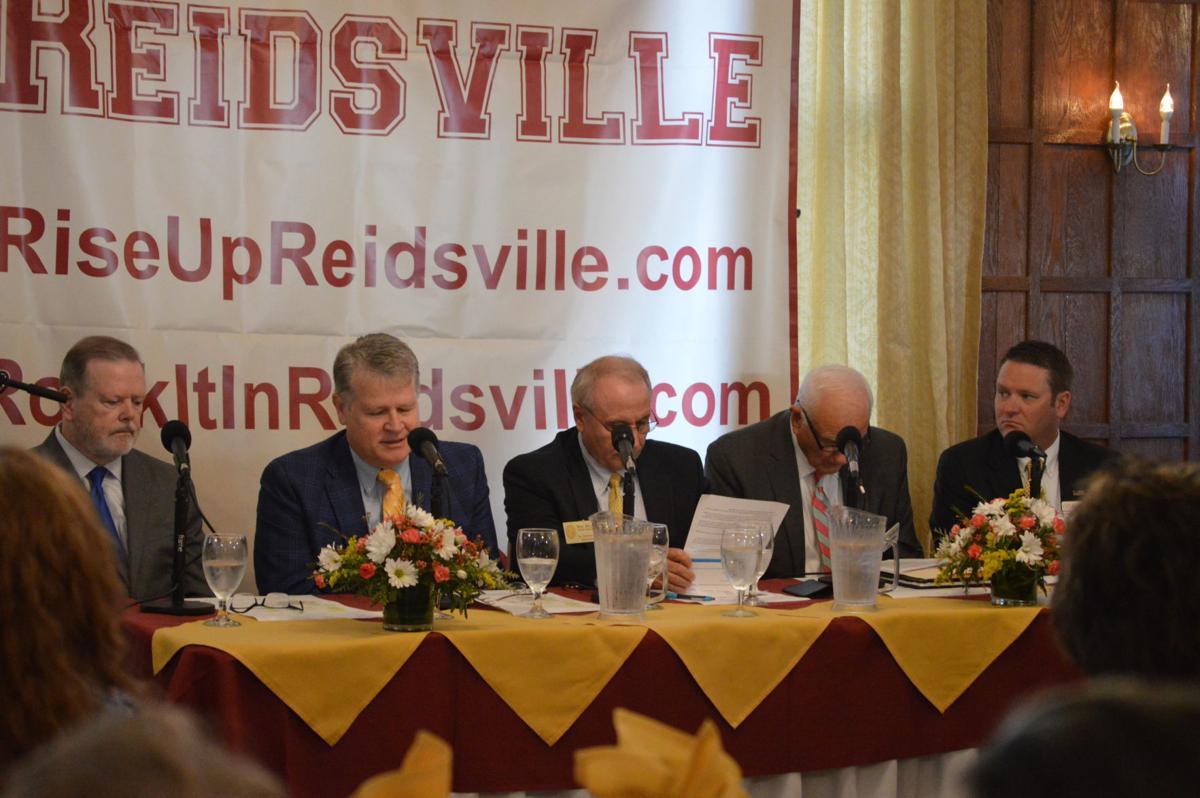 State and city leaders participated in a Transportation Forum Friday, discussing Future I-785 and other related DOT projects. 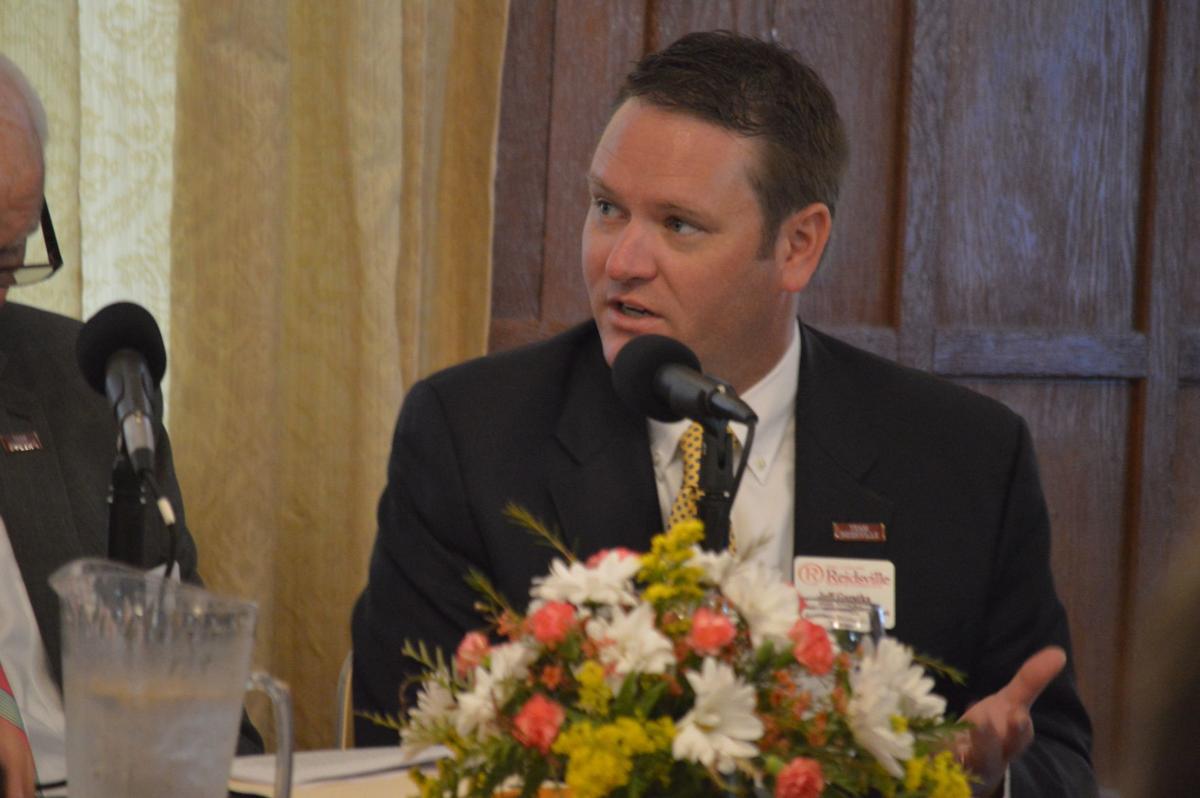 Reidsville Economic Director Jeff Garstka discusses the impact of an interstate designation would have for the City of Reidsville during a Transportation Forum in September 2019. 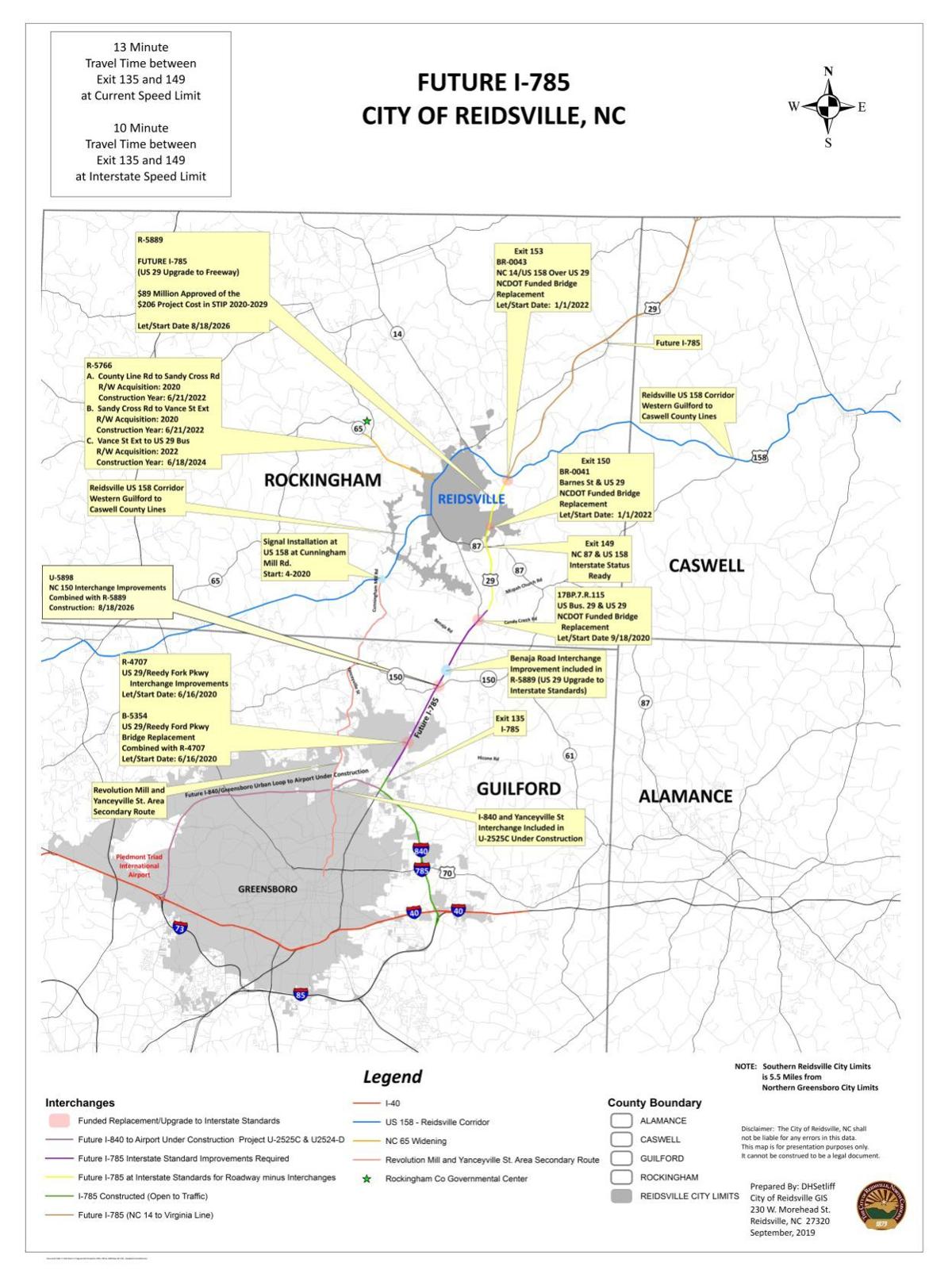 State and city leaders participated in a Transportation Forum Friday, discussing Future I-785 and other related DOT projects.

Reidsville Economic Director Jeff Garstka discusses the impact of an interstate designation would have for the City of Reidsville during a Transportation Forum in September 2019.

REIDSVILLE — Future I-785 is fully funded and slated for its pre-construction phase in 2025, state and local officials said Friday morning during a transportation forum hosted by the Reidsville Chamber of Commerce.

The group also tackled misconceptions about the project that will ultimately transform U.S. 29 into an interchange, connecting the Greensboro Urban Loop near the Piedmont Triad International Airport to the Virginia state line.

Friday’s focus centered mainly on a 16-mile portion of U.S. 29 that starts at the loop, near Hicone Road in Greensboro and runs to the U.S. 158/N.C. 14 interchange.

The $89 million portion of the $206 million project will help remake the U.S. 29 roadway to interstate standard.

Near-future plans also include several improvements and bridge replacements for future interstate entrance and exit points on the stretch between Guilford and Rockingham Counties.

Construction is slated for 2022 on several heavily traveled bridges that branch off the U.S. 29 system that will be converted to I-785.

In Guilford County, interchange improvements, including a bridge replacement, will begin at Reedy Fork Parkway in the summer of 2020.

And N.C. 65 will be widened from Harrison Street in Reidsville to the county seat in Wentworth.

While the infrastructure investment itself will improve travel times and safety, it will also provide quality of life improvements for citizens, reducing travel time to work, healthcare facilities and other necessities, officials said.

The interstate build, which could head to the construction phase as soon as 2027, will also serve as a gateway for economic growth.

Several state and local officials discussed the industrial, residential and retail impacts I-785 will have in future decision making by businesses during the consulting and location selection process.

“In today’s economy, the ability to move people and product from place to place is extremely important,” said Berger, who also said the future interstate will help bridge the gap between rural and urban areas.

“Often times companies will hire consultants to send out requests for information and could be nation-wide or geographically centered,” Gartska said. “If your community is not within a certain amount of miles of an interstate, you are literally not even on the map in their minds. If it doesn’t have the blue shield, you’re not included.”

Gartska said that while I-785 isn’t the first topic that comes up when talking with prospective businesses, city officials always emphasize its importance.

But for the most part, prospects have already done their homework.

As did Love’s Travel Stop and Pella, which announced in May the creation of 125 jobs at its new east coast manufacturing hub in Reidsville.

“It has intrigued a lot of people, especially with how it ties into Interstate 840 and around north Greensboro to the airport area,” Gartska said.

As for I 785’s everyday impact, Gartska sees a bright future for Reidsville as business continues to expand locally and in northern Greensboro.

The city has done extensive market research, particularly in retail, showing that a good number of people in the northern portion of Guilford prefer traveling to Reidsville for their grocery and other retail needs, Gartska said.

“We literally have actual market data showing people coming from those areas to Reidsville instead of Greensboro for the most part,” Gartska said. “We already know that our day-to-day market is well into Guilford County and we expect that to continue to grow as Greensboro grows north and we grow south.

“…We’re going to merge closer together ant that provides opportunities for our people to go there and vice versa. The connectivity is huge.”

Yes, admit Reidsville could use some expanding....maybe do something with all the drug abuse and crime first yea? Lived here all my life and about 10-12 years back things took a turn for the worst here. I was literally almost kidnapped once just cause I walked to my local Walmart 4 years prior.