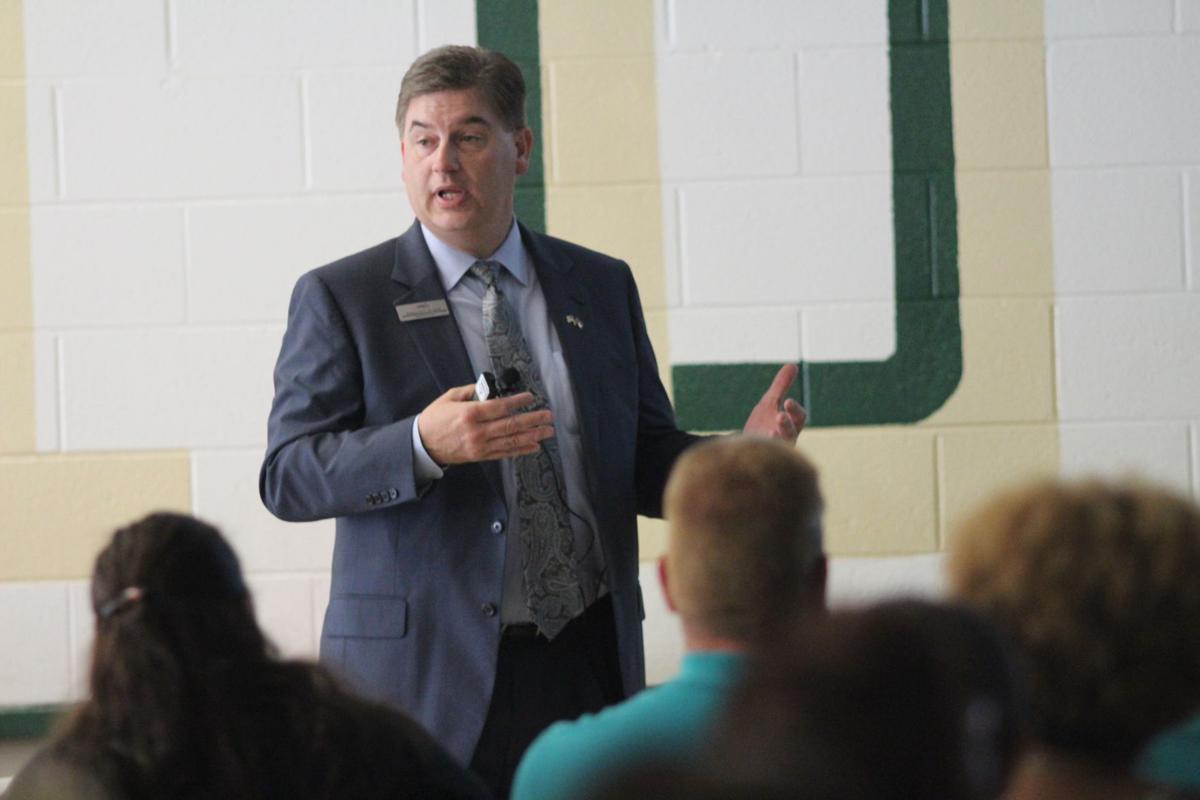 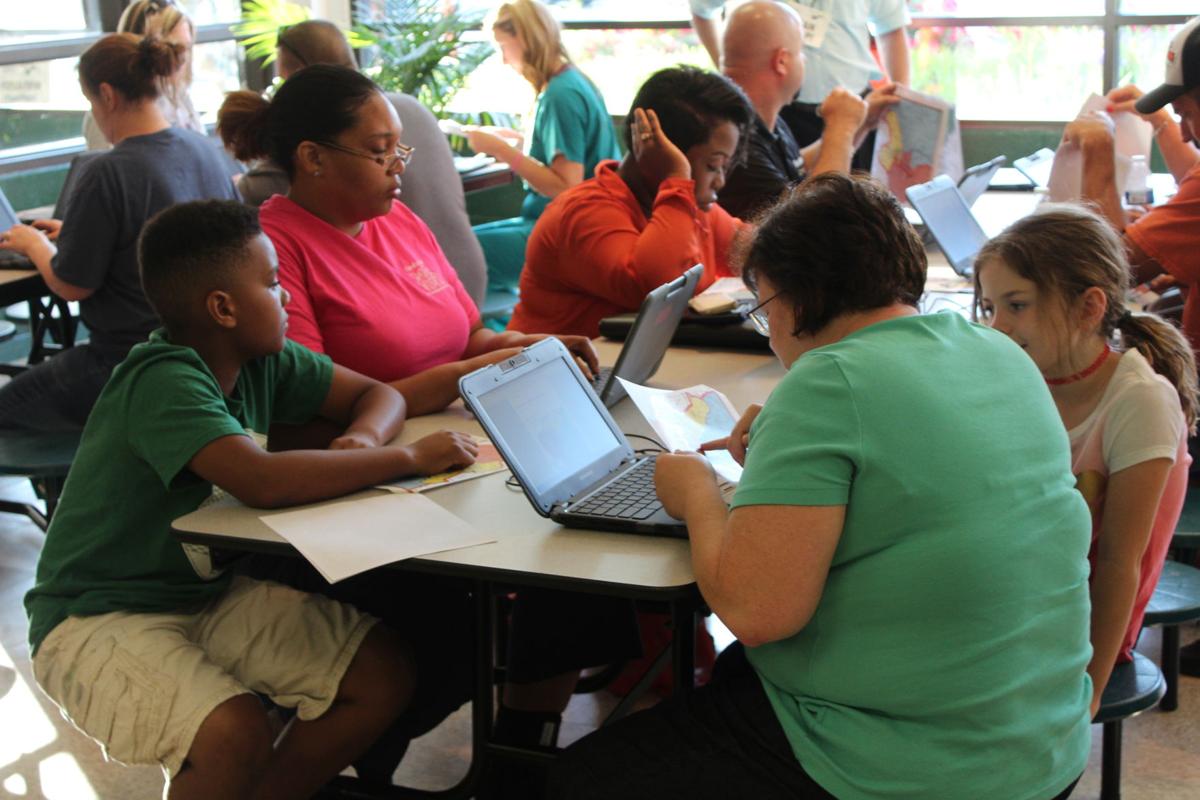 Parents submit their thoughts on possible school closures using an online form at the May 16 community focus group meeting at Reidsville Middle School.

Since April 25, school officials have hosted these meetings in each of the four zones of the county to inform the public of the district’s budget concerns and gauge public response to the potential school closures.

At the May 16 meeting at Reidsville Middle School, Superintendent Rodney Shotwell explained that, to address the budget shortfall, RCS is considering facility repurposing and closure and student reassignment.

“It is simply a starting point,” Shotwell said of the current options. “I think the one positive thing that has come out of this is there has been a lot of discussion, not only here in Reidsville but in other places in the county. I think it’s always good to have good discourse to talk about what’s best for our kids and what’s best for our county.”

Rockingham County Schools expects that it may need to cut about $4.2 million. The school system plans to request a $1 million increase in funding from the Rockingham County Board of Commissioners to reduce the needed cuts to $3.2 million.

Rockingham County Manager Lance Metzler said at a March board of commissioners meeting, however, that he recommended a 2 percent budget decrease from the sheriff’s office and all departments, including Rockingham Community College and Rockingham County Schools.

“If we are going to suffer as a county, they need to have a little skin in the game as well,” Metzler said in March.

If the county allotment to the school district is reduced, RCS anticipates deeper cuts will be necessary.

According to data from the North Carolina Department of Public Instruction, average daily membership in Rockingham County schools has gone down each year over the last several years.

Based on the numbers presented at the May 16 meeting, closing Draper, Dillard and South End would save RCS about $1,305,909, accounting for cut positions at those schools and the added costs of relocation.

Those savings would equal about 31 percent of the proposed $4.2 million in cuts.

According to Shotwell, if any schools close, the teachers would follow the students to new schools, retaining their jobs albeit at a new location.

“Where it becomes unique would be the principal’s position, bookkeeper, data manager, guidance position, media specialist—the custodians would be absorbed at other schools because they’re always a vacancy somewhere—our instructional coach, cafeteria manager, cafeteria staff,” Shotwell said. “But the thing about this, if we do a plan and we have a year to plan for it, when positions open up at other schools, it would also give people at the schools that might be affected an opportunity to apply and go for another job.”

The district arrived at the options following the results of the Integrated Planning for School and Community Study conducted by the Operations Research and Education Laboratory at North Carolina State University.

The study found that across the school system, RCS has a capacity of 16,217 students, but only 12,353 are enrolled, meeting 76 percent of the district’s capacity.

According to the study, a majority of schools in Rockingham County are underutilized with 17 of 23 schools, not counting Rockingham Early College High School, at 80 percent capacity or less.

The three elementary schools with lowest population-to-capacity percentages are Dillard at 44 percent, Draper at 45 percent and Lincoln at 59 percent.

In Eden, Draper could close with all students moving to Lincoln.

In Reidsville, South End could close, dividing its population between Moss Street and Monroeton, and transferring some Monroeton students to Williamsburg.

“I really believe that probably the areas that are going to be the hardest to talk about is going to be right here in Reidsville because of the recommendation that has been shown here,” Shotwell said. “This has probably been the most well attended of the four (community meetings) as well.”

The proposals were designed to help address underutilization of schools while also taking into account transportation distances for students, respecting neighborhoods, efficient busing and the age and condition of schools.

In discussing school closures, Shotwell noted that repurposed schools could become community centers, senior centers or take on other uses.

“One of the suggestions that has been brought up from folks over the last four weeks is that there’s really is not a magnet school on the eastern side of Rockingham County,” Shotwell said. “What if?”

Following the meeting, attendees were invited to submit their response on laptops using the online Pathway to Transparency feedback form.

To access the form or to find more about the studies mentioned, redistricting options and maps, visit www.rock.k12.nc.us and click on RCS Pathway to Transparency. The form will be available until 8 p.m. on May 29.

Rockingham County board to vote on school closures in November

EDEN — The Rockingham County Board of Education is just under two months away from deciding whether to close Draper, Dillard and/or South End …

WENTWORTH — Parents, teachers, student and concerned citizens poured into Rockingham County High School on Nov. 9 to tell the school board the…

EDEN — The current buildings of Draper Elementary School in Eden and New Vision School of Science, Math and Technology in Madison will both cl…

EDEN — Superintendent Rodney Shotwell has addressed some of the lingering questions following the school board’s Nov. 20 decision to close two…

The Rockingham County Board of Education on Monday voted unanimously on the superintendent’s recommended Draper reassignment plan, but the Western Rockingham County two-schools-in-one solution came with controversy.

EDEN — After public outcry over the planned merger of Dillard Elementary School and New Vision School of Science, Math and Technology, the Roc…

MADISON ­— As Dillard Elementary School and New Vision School of Science, Math and Technology negotiated the two-schools-in-one plan, a one-sc…

EDEN — As Dillard Elementary School and New Vision School of Math, Science and Technology prep for a merger, the school board smoothed over on…

Parents submit their thoughts on possible school closures using an online form at the May 16 community focus group meeting at Reidsville Middle School.