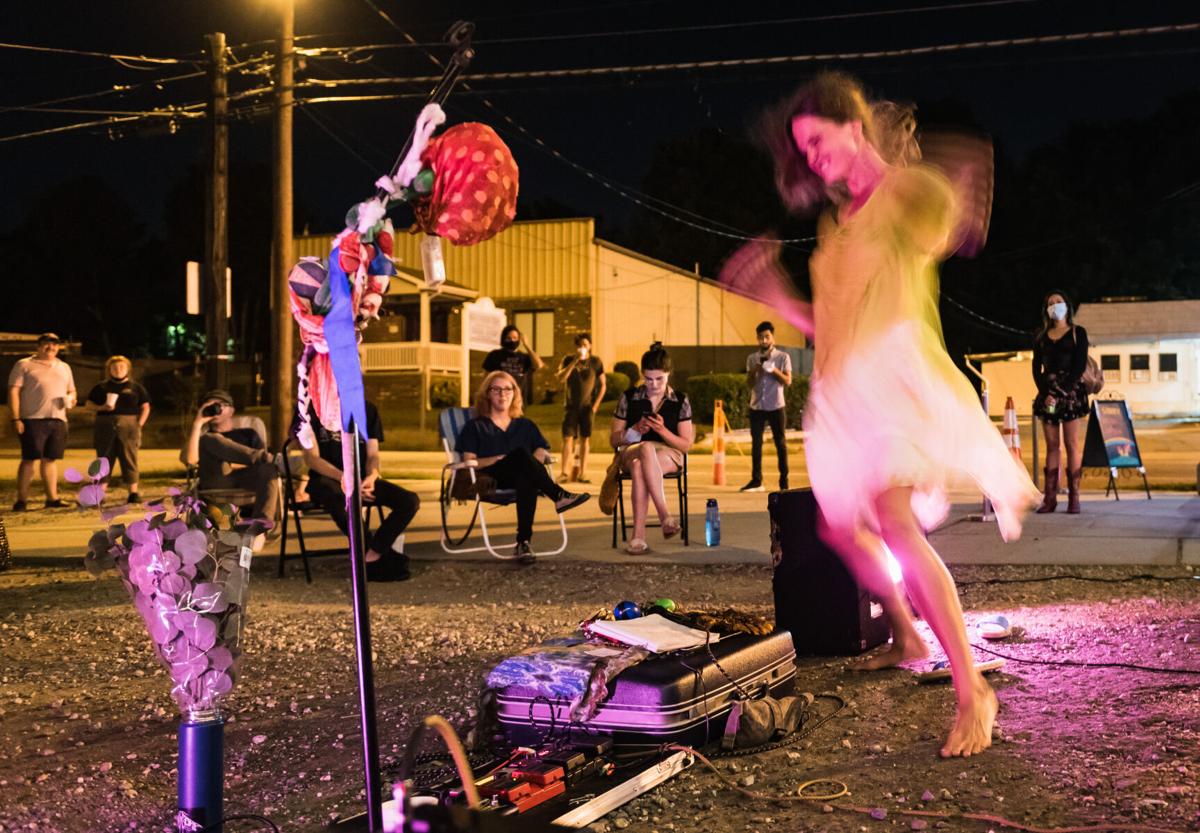 Amy Fitzgerald, also known as Damiyana, performs for a socially distanced crowd outside of Monstercade in Winston-Salem recently. 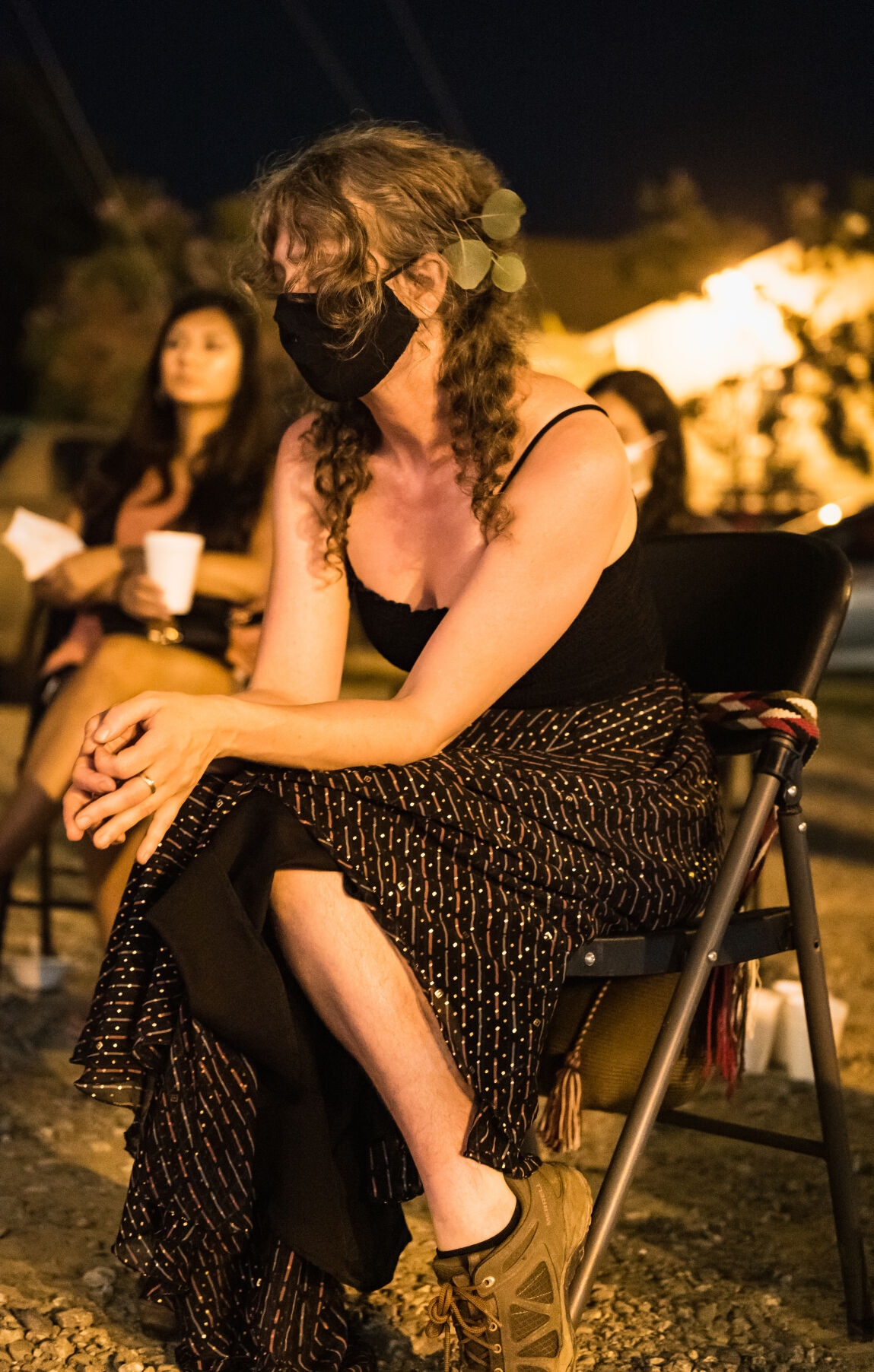 Sofia Mazaris closes her eyes and moves to the music as Damiyana performs for a socially distanced crowd outside of Monstercade.

WINSTON-SALEM — At 5 p.m. on March 17, seven folks at Monstercade, a dive bar on Acadia Ave., lifted their drinks, stared into a camera and proclaimed "cheers."

The salute coincided with the closure of restaurants and bars, one of Gov. Roy Cooper's first orders to stop the spread of the new coronavirus.

"We'll see you soon," the gathering at Monstercade wrote on a photo that was posted on social media.

Carlos Bocanegra, the owner of the bar, reflected on that moment a few days ago. A regular traveler to New York City, he had been keeping tabs on that city's battle with this new virus that was creeping into the city, infecting, and killing, an alarming number of residents.

The dark cloud would soon drift south, he figured.

"I honestly thought maybe we'd be in this for two to three months. I saw the stats from China and Italy and they seemed to recover within two months, and maybe because we are bigger, it could be three months," Bocanegra said. "But here we are."

The stools at the tiny bar have remained empty since that last drink nearly six months ago, a stark reminder of a pandemic that has lingered far beyond what many of us imagined back in mid-March when a flurry of events — the sudden postponement of the NBA, the end of the ACC Tournament, President Trump's travel ban from Europe — snapped us into attention. Within days, our world was upended, changing the way we work, shop, eat, go to school, travel and socialize.

Among the many victims has been live music, especially the kind played in bars, clubs and theaters, where the give-and-take between musicians and audience results in a transcendent, communal joy.

Debbie Carson is one of the owners of The Reeves, which was marking its third year of bringing roots music to downtown Elkin. The loss of live music at this gem of a music house has hit Carson financially and emotionally.

"It's such a big piece of my heart," she said. "There were a lot of ways we thought we could go down, but a pandemic was not on my list. It blindsided us."

Revitalizing The Reeves, a former movie theater, was a slow-moving project filled with fits-and-starts. After three years gaining its footing as a live-music venue, The Reeves was on the verge of having its most profitable month in April.

"We thought it was going to be our best month in terms of ticket sales, and that maybe we'd even be operating in the black. We were all encouraged. Our booking team had learned a lot in the last two years, what draws in local people, what's a good regional show. You have to get a feel for that and build your audience," Carson said. "It came to a screeching halt."

The Reeves shut down its kitchen and bar because it didn't make financial sense to seat only a few people at a time in its small dining area. Carson is thinking ahead to maybe having some smaller open-mic nights, but for now, nothing is definite.

With the future uncertain as far as reopening, Carson is focusing on enhancing parts of The Reeves. It's adding a new lounging area for musicians with a handicapped accessible shower and added more office space.

"We're really committed to reopening but we don't know what that will look like," Carson said.

Over at Monstercade, which has smaller overhead costs and a smaller staff than The Reeves, Bocanegra was able to pivot the bar's mission from a live-music and drinking space to a beer delivery service. Almost immediately after Cooper's shut down, Monstercade began selling and in some cases, delivering beer. It doesn't bring in much money, but it pays a few bills.

A few months ago, it also began some live programming, moving events to a parking lot that can hold about 50 cars. Events include an open-mic comedy night, movie nights and scaled-down music shows Friday nights. The events are free but people have been generous with tips to the acts and the club's staff.

He isn't sure what will happen when the weather turns cold. If Cooper moves the state into Phase 3, which allows for bars and nightclubs to open, Bocanegra said he will think long and hard before opening Monstercade because of safety concerns.

Like Carson at The Reeves, Bocanegra is using the break from indoor shows to make some improvements. While he tinkers inside, he said he can feel the energy of crowds' past.

A hub for artists and unconventional thinkers, Monstercade will survive by being creative, Bocanegra said.

"You know how they say that when there's a nuclear apocalypse that only cockroaches will survive?" he asked. "By God, Monstercade is going to be that roach that makes it through."

Besides venues owners, fans of live music are also feeling a void.

Jennifer Bauer Sapp and her husband, Wayne, are huge concert-goers, and immediately became fixtures at The Ramkat when the club opened in 2018.

They saw Old Crow Medicine Show at The Ramkat on Feb. 28, their last show at the venue.

Looking ahead to spring, they had a host of shows to attend including Drive-by Truckers and Chatham County Line at The Ramkat.

"The sad thing is we had tickets to MerleFest and we would have seen John Prine," Jennifer said of the folk musician who died in April of COVID-19. "Of all the kicks in the gut, that was the biggest one."

As much as she misses live music, going to a packed venue is not worth the risk of getting sick or spreading the disease to a loved one, she said.

She and her husband have live streamed some concerts and regularly buy music from some their favorite acts.

And they're also waiting, patiently, for a day when they can return to a music hall.

"I wish that COVID was done. I wish it would have been what we thought, 'Let's stay home and let this die out.' But people weren't careful," she said. "And it's a sad reality for all of us."

Purina to move into old MillerCoors plant in Eden. 300 workers will be needed for $450 million production facility slated to open by 2022

Amy Fitzgerald, also known as Damiyana, performs for a socially distanced crowd outside of Monstercade in Winston-Salem recently.

Sofia Mazaris closes her eyes and moves to the music as Damiyana performs for a socially distanced crowd outside of Monstercade.