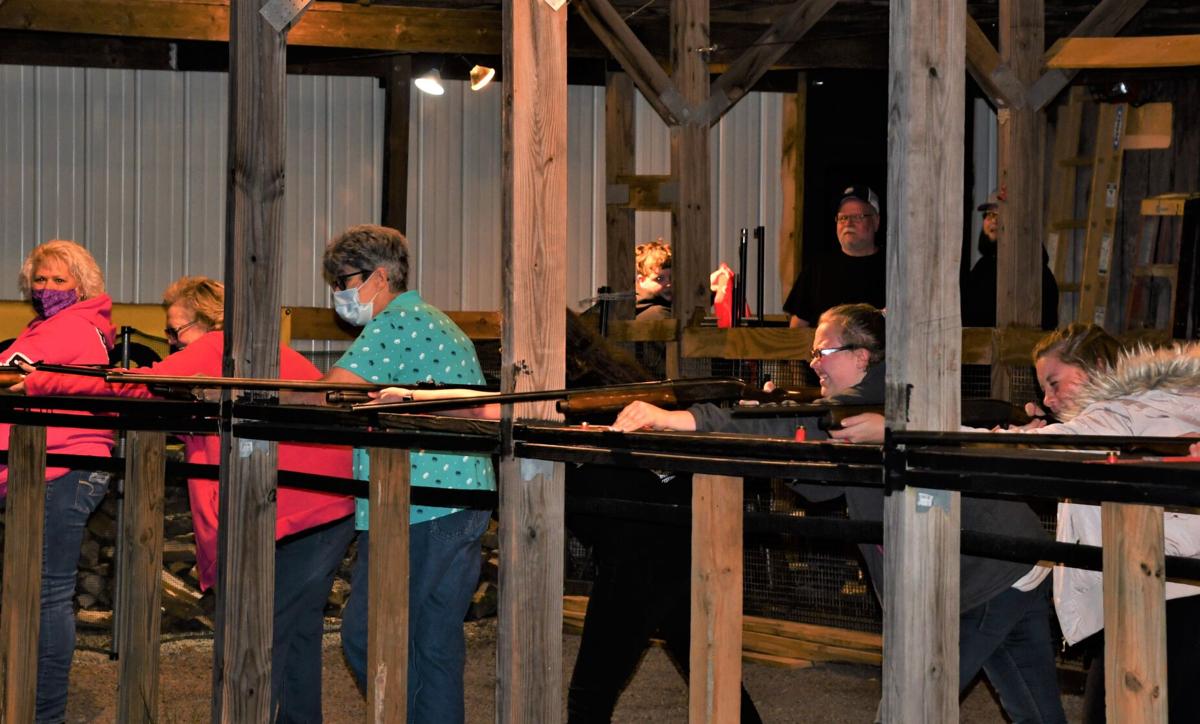 Some of the ladies take aim on a recent Friday night. 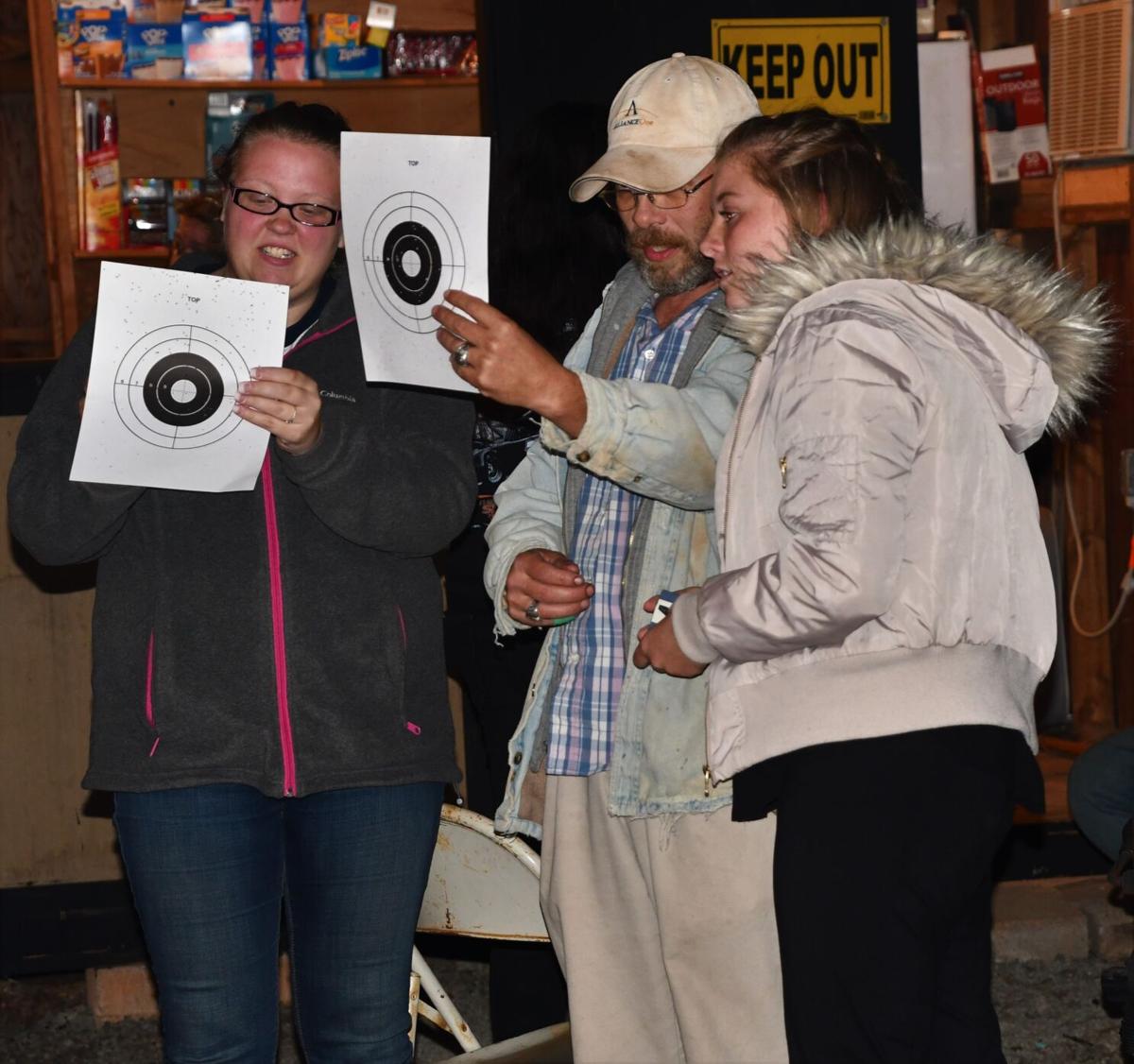 Ali Rutherford, 27, of Kernersville, Raymond Daniels and his daughter, Odessa, of Walnut Cove, from left, compare their targets after the first round. 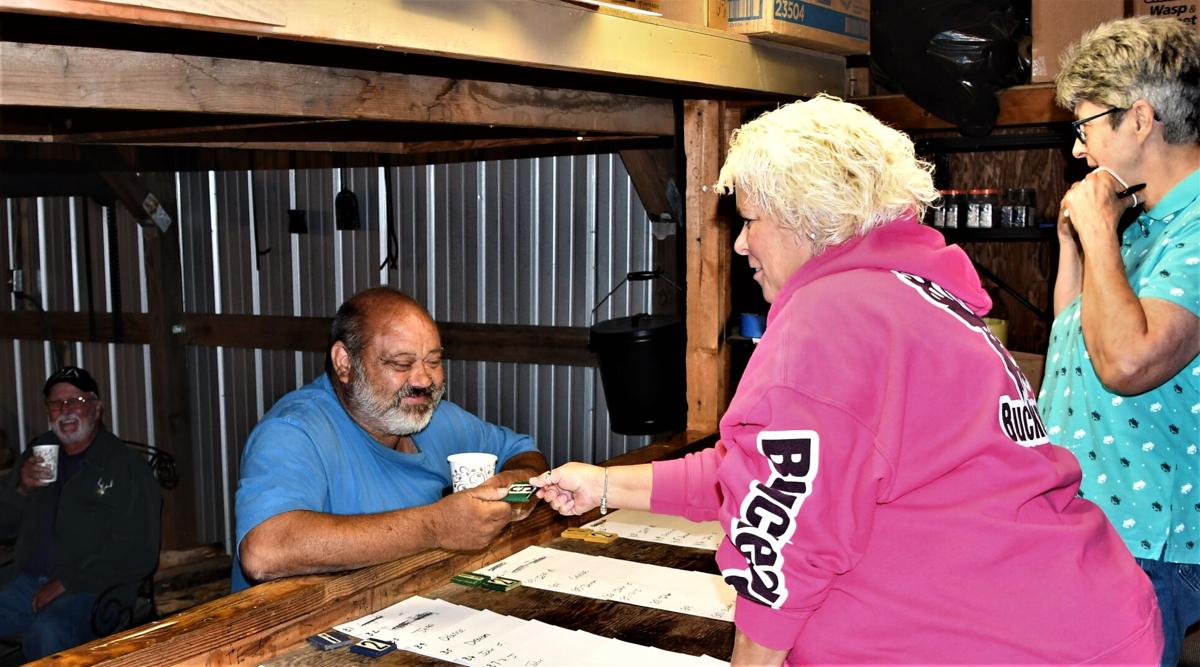 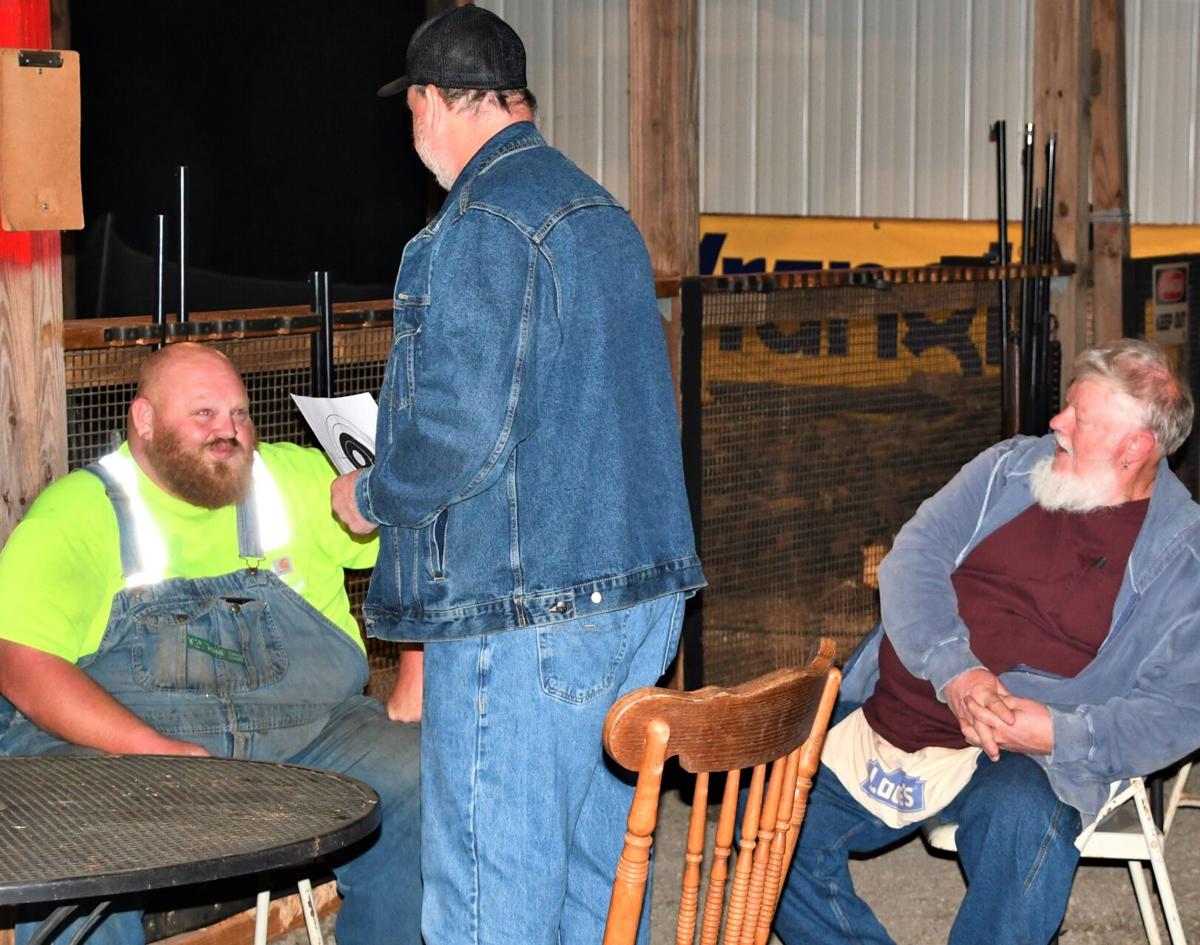 Reid Stuart of Stokesdale, John Shelton of Bethany and Bobby Eaton of Stokesdale, from left, enjoy each other’s company in the family-like atmosphere. 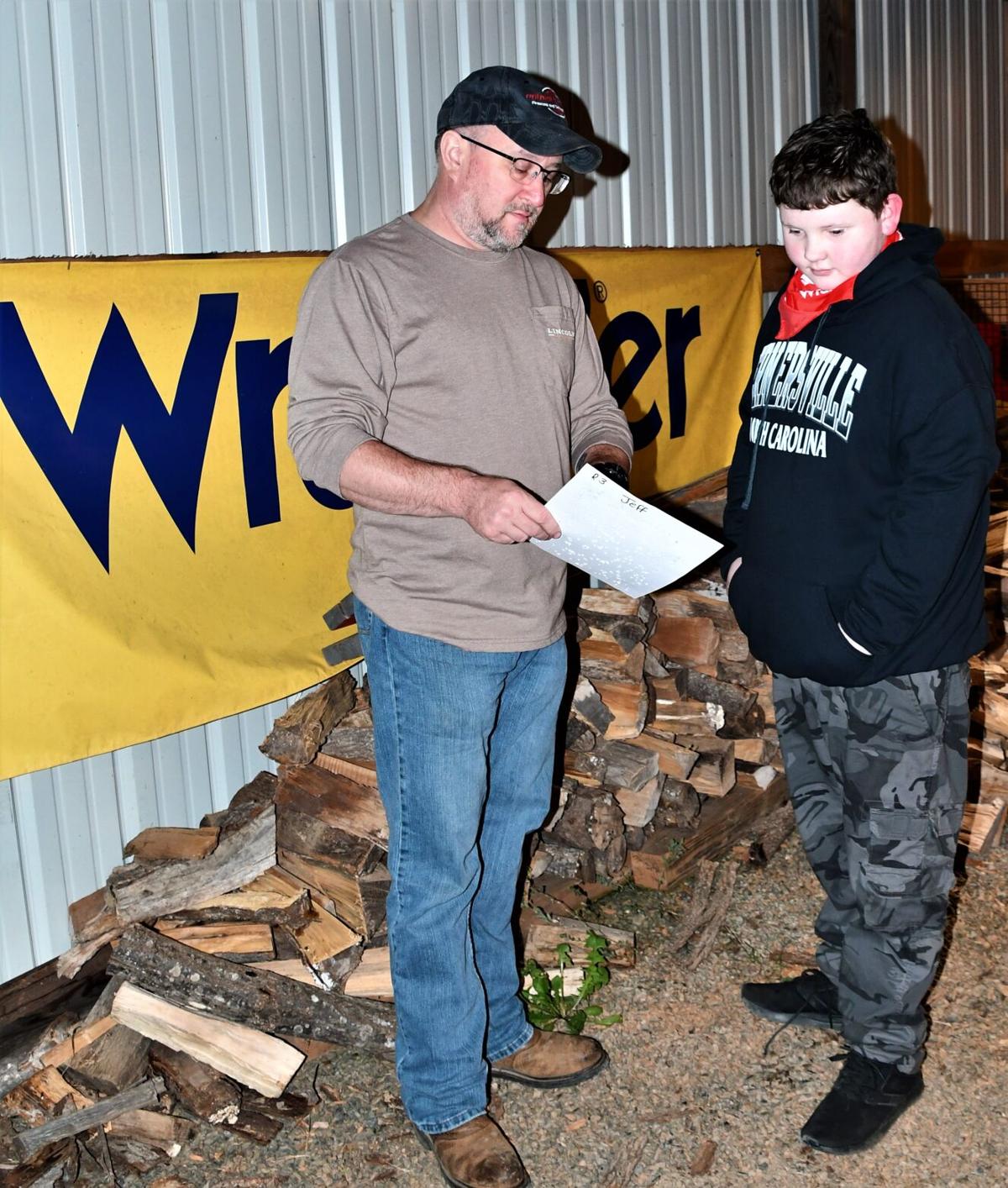 Jeff McMahon of Eden checks the target of 11-year-old Brandon Pegram of Kernersville. This is Brandon’s second year of participating in the local turkey shoot. 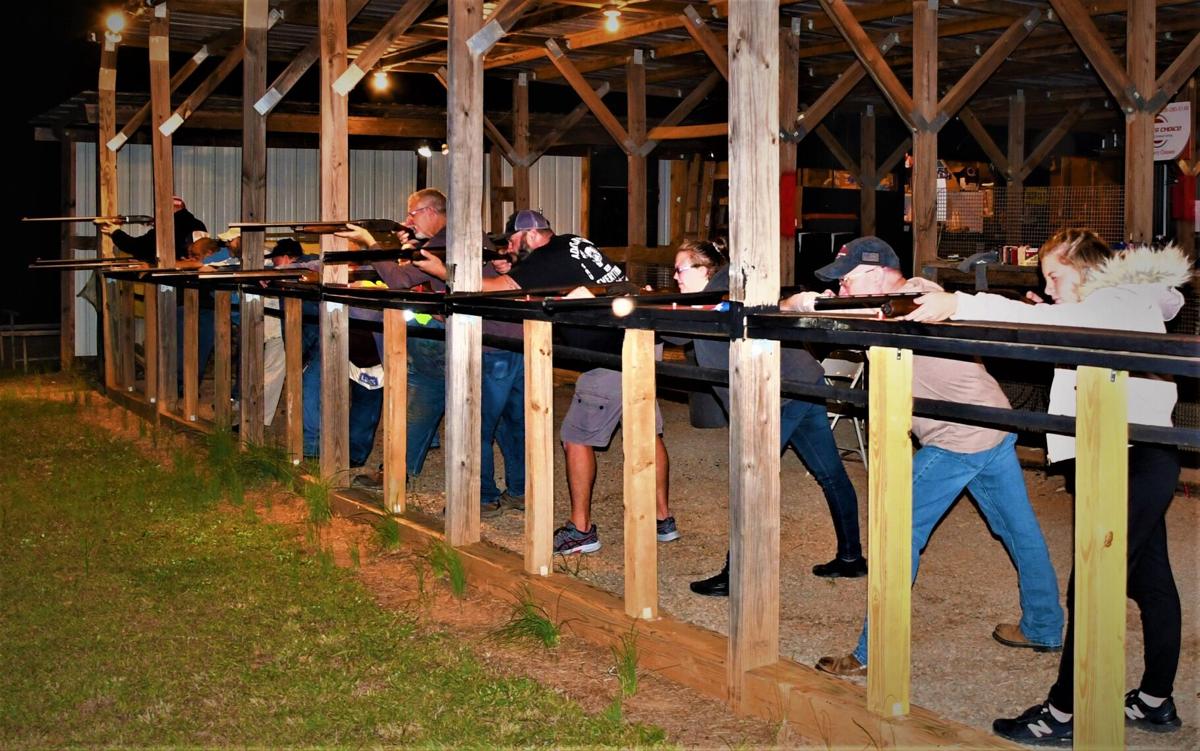 Men and women shoot together in an early session. Children also participate on a regular basis.

Zoe Bailey, foreground, hangs jewelry on a display as she helps her mother, Owilda Bailey, center, and volunteer Tammy Pedone sort and size new clothes at the The New Clothing Center.

BETHANY - With pandemic-related restrictions canceling many recent events, the friendly family atmosphere that prevails at weekend turkey shoots at the Bailey Farm on New Lebanon Church Road is a welcome get-away.

Located in a 1200-square-foot building, shooters from as far away as Thomasville join locals on Friday and Saturday nights to vie for a variety of prizes. Three sides of the rectangular building are enclosed, but the fourth is open to allow as many as 12 gun enthusiasts to aim at targets 90 feet away.

Although turkey shoots have been held in Rockingham County for about 50 years, they have been phasing out. That's why Chuck and Owilda Bailey established Rockingham Family Charities Turkey Shoot five years ago on their farm. The 2020 season opened the first Friday in October.

“This is our fifth year. It was slow the first year but now we often have 20 or more participants,” he said. “We would love to have more and welcome families and children of all ages.”

Proceeds from the Rockingham Family Charities Turkey Shoot go back into the community. The old Bethany School cafeteria building is used to house The New Clothes Center to provide new clothing and food to underprivileged families. They also accept donations, which can be mailed to 345 New Lebanon Church Road, Reidsville, NC 27320.

The fall weather was perfect Oct. 9, as the shooting event got underway. Some participants came from Thomasville, Walnut Cove and Kernersville.

Before starting the turkey shoot, Bailey, 69, had leased some of his 25 acres to farmers. Unhappy with the fact they often left the property in poor condition, he decided to pursue other alternatives.

Shortly after retiring in 2012 as a fabricator and welder at Cross Company in High Point for 31 years, Bailey knew he didn’t want to leave his land “just sitting there.” A friend suggested he start a turkey shoot – describing a place people could come, spend money, have fun and help other people.

He wanted his main focus to be children. With the profits from the turkey shoot, Bailey received a 501(c) (3) status and opened The New Clothes Center.

At the turkey shoot, Devon Eckert from Thomasville said he had been participating in turkey shoots for a couple of years. He found out about the Bailey operation on Facebook.

“I enjoy doing them. I think they are a lot of fun,” Eckert said, noting, he felt “it was pretty well organized and had door prizes. It went pretty smoothly.”

In fact, Eckert won the first round and selected a T-shirt as his prize. He definitely plans to return and hopes to bring some friends.

Eden’s Jeff McMahon got involved with the turkey shoot three years ago while looking for a target range for his Carrying Concealed Weapons (CCW) students.

He contacted Bailey and, after taking a tour of the range and the clothing center, “felt like it was a worthy cause,” McMahon said. Now, he teaches classes at the site about once a month in addition to being at the turkey shoots every Friday and many Saturday nights.

Sometimes, McMahon does a special class, donating the net proceeds to Bailey’s charity. His wife, Rhonda Martin McMahon, formerly of Reidsville, accompanies him several times a year to the turkey shoots.

“Hopefully, in the near future, we also will be able to offer CPR classes,” said McMahon, a certified CPR instructor.

Brandon Pegram, 11, of Kernersville first came to the turkey shoot last year and enjoyed it so much, he came back this year.

Bethany resident John Shelton has participated in the event since it began. His father, the late Nathan Shelton, introduced him to turkey shoots a quarter of a century ago in Huntsville where Nathan was the “top shooter” for 12 years in a row. John also captured the top award there a couple of years.

Last year, Shelton came in second at Bethany. He tries to go every Friday and Saturday night.

“My kids (ages 13 and 11) grew up around it,” he said. “To me, it teaches kids gun safety. It’s not just to shoot and stuff. Kids are growing up around guns and learning how to use the gun.”

His extended family enjoy participating in turkey shoots and have participated in various ones in Colfax, Huntsville, Summerfield until they shut down.

“It is the closest one to me,” Shelton said of the Bethany facility. “I enjoy it and the kids enjoy it.”

Bobby Eaton of Stokesdale was the overall winner of the turkey shoot for the past two years. This is the fourth year he has participated, coming every Friday and Saturday. Eaton also serves on the board of the Rockingham Family Charities.

“I like what they do," he said, noting it helps people in need.

A Summerfield Fire Department volunteer for 12 years, Eaton said he also goes to the turkey shoots to pass the time.

“I know where the money goes – to help kids,” he said, noting children get vouchers to purchase shoes, back packs and other items they need.

A separate section at The New Clothes Center houses items such as blankets, household items and other necessities for people whose homes have been destroyed in fires.

For the past eight years, Chuck has driven a school bus for the Bethany Community School, which relocated in 2017 to N.C. 158 in Summerfield.

1st, 2nd and 3rd place winners will receive a special prize (to be determined).

DETROIT - A Michigan woman says she woke up to someone urinating on her while she was on a Delta flight home to Detroit from Las Vegas. That s…

REIDSVILLE — Authorities say the death of a person found Friday is suspicious and are looking for a person of interest in the investigation, a…

What are COVID-19 'rapid tests' and how accurate are they? Answers to common questions.

As with everything related to the novel coronavirus, what we know about testing for COVID-19 is constantly changing.

Some of the ladies take aim on a recent Friday night.

Ali Rutherford, 27, of Kernersville, Raymond Daniels and his daughter, Odessa, of Walnut Cove, from left, compare their targets after the first round.

Reid Stuart of Stokesdale, John Shelton of Bethany and Bobby Eaton of Stokesdale, from left, enjoy each other’s company in the family-like atmosphere.

Jeff McMahon of Eden checks the target of 11-year-old Brandon Pegram of Kernersville. This is Brandon’s second year of participating in the local turkey shoot.

Men and women shoot together in an early session. Children also participate on a regular basis.

Zoe Bailey, foreground, hangs jewelry on a display as she helps her mother, Owilda Bailey, center, and volunteer Tammy Pedone sort and size new clothes at the The New Clothing Center.