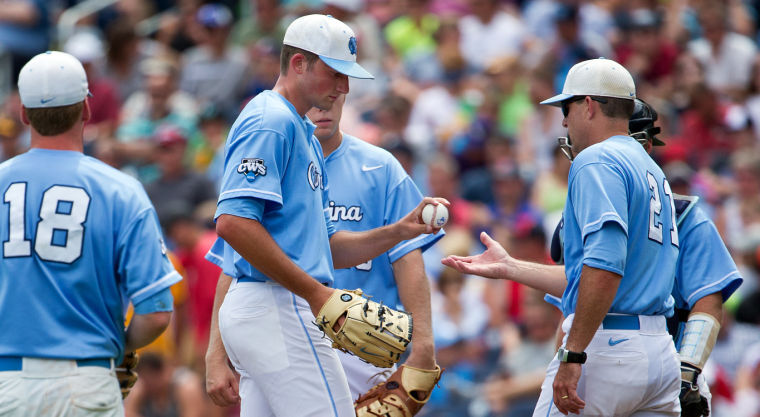 CHAPEL HILL – It’s the end of an era at North Carolina following the retirement of head baseball coach Mike Fox earlier this year.

“Serving as the head baseball coach at my alma mater for the past 22 seasons has been one of the greatest blessings of my professional life,” he said.

“I have been in love with the University of North Carolina since I was a young boy. To see my dream of becoming a Tar Heel student, player and coach is hard for to even comprehend,” said Fox.

Respected nation-wide as one of America’s most successful coaches, he led the Tar Heels to seven NCAA College World Series appearances, including four-consecutive trips from 2006 to 2009. He closed out with an overall record of 1,487-547-5 and was named to the North Carolina Sports Hall of Fame in 2017.

“From playing in the College World Series as a Tar Heel senior, to winning a Division III National Championship at N.C. Wesleyan, to leading Carolina to Omaha seven times as the Tar Heels’ head coach, Mike’s impact on college baseball has been legendary,” North Carolina Athletic Director Bubba Cunningham said.

In a statement released by UNC Athletics, Fox, 64, said it was time for him to spend more time with his wife Cheryl and his growing family.

“For the first time in almost 40 years, the time without coaching allowed me to truly experience family once again. Cheryl and I gained another grandbaby, and because our daughter and son-in-law live very close, we are able to experience the joy of children daily. I have also been able to spend more time with my son and his wife. It has been a blessing,” Fox said.

As a college player at Wesleyan, he hit .321 over the course of his career and led the team to a pair of league championships which included a fifth place finish at the 1997 Division III World Series. During his final college season, Forbes hit .387, had 61 RBIs and 27 doubles. In addition, during his senior campaign, he set the Division III single season record.

“For nearly two decades I’ve had the privilege of pouring my heart and soul into Tar Heel baseball,” said Forbes.

“I’m so proud of what we have accomplished with coach Fox and incredibly excited about our future,” Forbes said.

Fox said he believes the future of UNC baseball looks bright with Forbes at the helm.

"He turned down several opportunities to move on to other jobs to stay at Carolina,'' Fox said.

"He is more than ready to be a head coach and will do an excellent job.''

Fox said making the decision to step away from the game that has defined his life wasn’t easy, but he expressed gratitude for the thrill of being a part of the Tar Heel baseball legacy.

“I came to Chapel Hill in the fall of 1974 as a true walk-on, eventually made the JV baseball and basketball teams, played in the College World Series and returned as head coach for 22 unforgettable seasons. The experiences I have been so fortunate to live out and the relationships I have made as a player and coach have gone way beyond anything that I could have ever imagined. Those experiences have exceeded even my dreams to this very day.”

DANVILLE, VA. — With Major League Baseball’s announcement earlier this week regarding the future of the Appalachian League, the Atlanta Braves…

CHAPEL HILL, NC - The Charlie Adams Distinguished Service Award, in honor of the long-time NCHSAA executive director who retired from that pos…

Smith, a former quarterback at Winston-Salem State, is now the quarterbacks coach for the Rams.