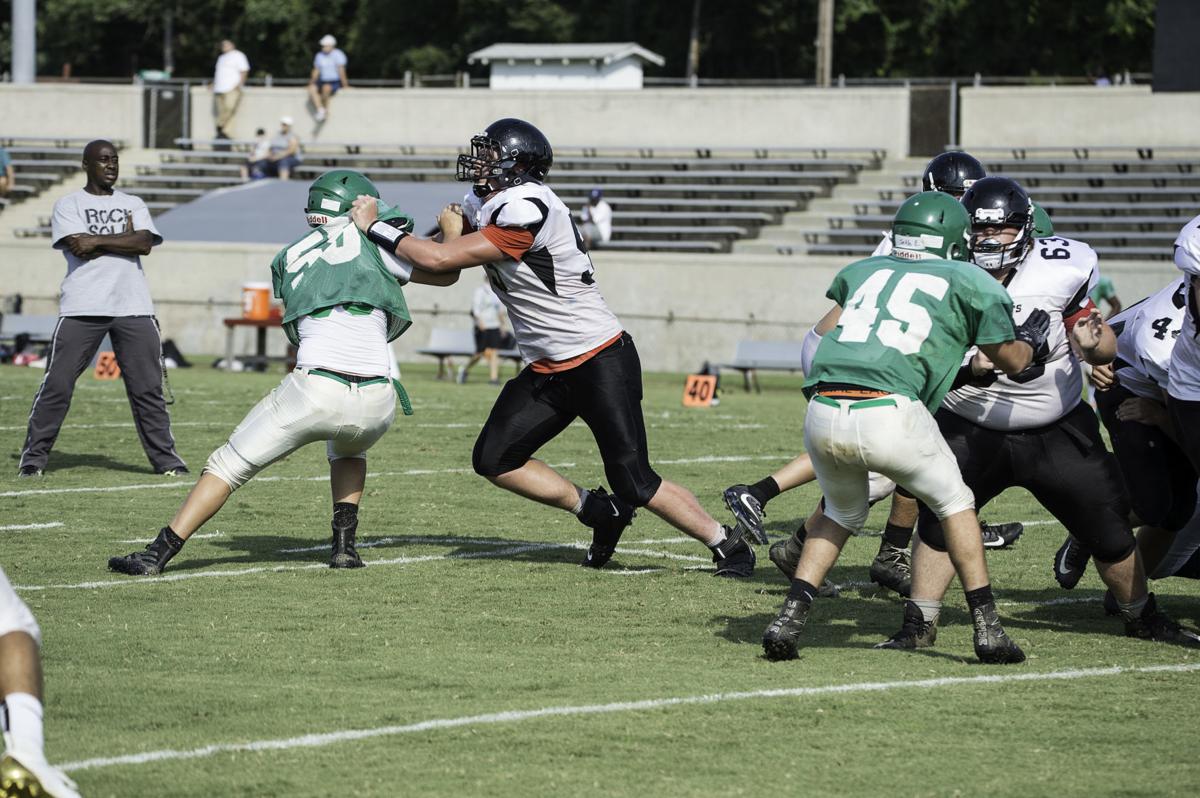 Rockingham County rising senior Colby Smith (left) verbally committed last week to play football at the University of Tennessee after his final season for the Cougars in 2020. He is pictured above pushing through the line during a preseason scrimmage last season. 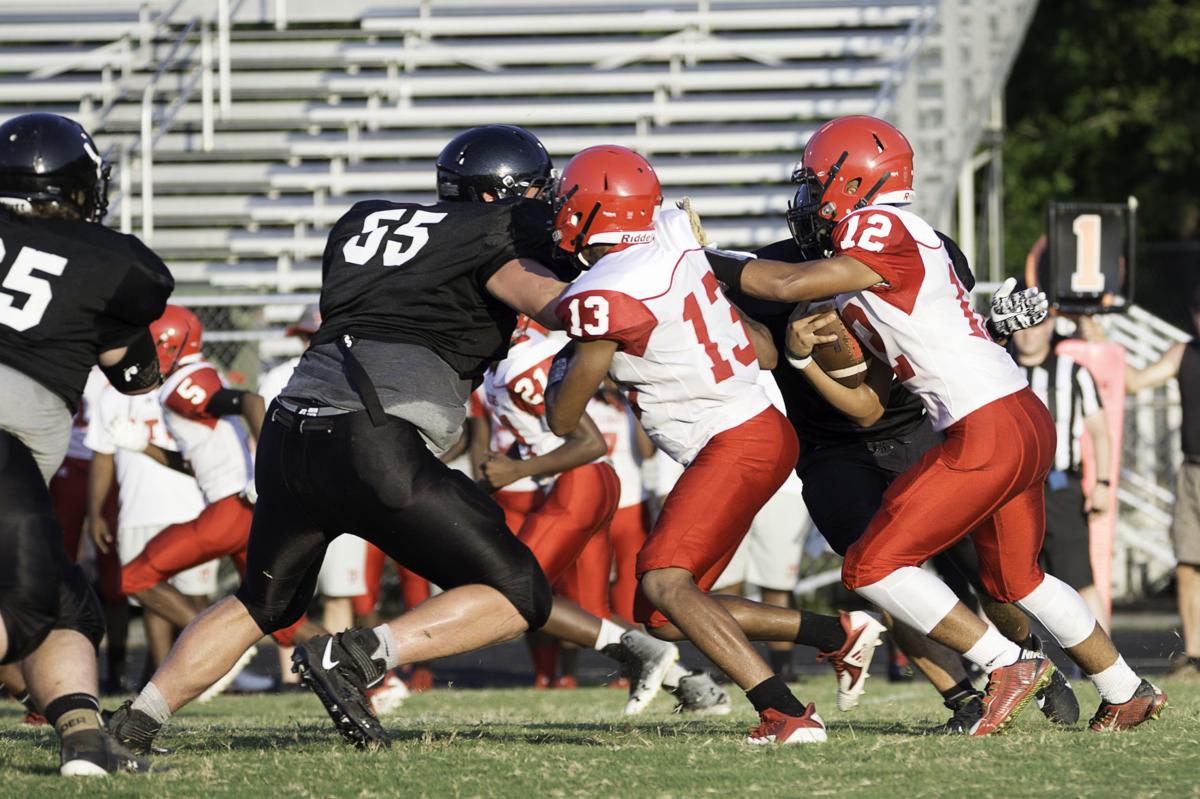 Rockingham’s Colby Smith (center) moves his man out of the hole during a preseason scrimmage last season.

Rockingham County rising senior Colby Smith (left) verbally committed last week to play football at the University of Tennessee after his final season for the Cougars in 2020. He is pictured above pushing through the line during a preseason scrimmage last season.

Rockingham’s Colby Smith (center) moves his man out of the hole during a preseason scrimmage last season.

WENTWORTH - Rockingham County rising senior Colby Smith made a verbal commitment to play football at SEC power Tennessee following his final season with the Cougars in 2020.

The big young man, with big-time dreams to match, received offers from more than two dozen schools from some of the top programs in the country.

Smith said narrowing his choices down got tougher as the recruiting process continued over the last two years. Among the top contenders, Louisville and NC State, were tough to turn down he said, but ultimately Tennessee felt like the right choice for him.

“Number one, I was looking for good, genuine people. I wanted to be around people that were going to be straight-up with me at a place that has a good family atmosphere. It’s a place where I feel like I can really fit in and thrive and be comfortable with the coaches. This is the only thing I have ever really wanted to do and getting that offer to play for something that big, it’s just an absolute blessing. It’s a dream come true really,” Smith said.

He said making his decision has helped him have some piece of mind since the pandemic crisis has altered the way he typically trains.

“It’s just crazy man. We were supposed to have spring practice and it really broke my heart, but I’ve been keeping myself on a schedule. I still wake up early working and get creative outside. I don’t really have any weights, but I do what I can,” said Smith.

Especially in the wake of the North Carolina High School Athletic Association’s decision to cancel spring sports, there is a possibility that fall sports might be suspended as well, but Smith said although concerned, it’s important to stay positive and be ready to go.

“Of course, why wouldn’t I be worried? We all are, but if it is god’s plan, then it’s god’s plan. There isn’t much more than you can do than put your head down and keep on working, you know?!”

Considering there were so many quality opportunities of which to choose from including Duke, North Carolina and NC State among other in-state offers, the offensive left tackle did a lot of soul searching before making his decision.

“I’m not exactly sure how many he ended up with (scholarship offers), but he and I have talked about it and I told him no matter how many you have, you can only take one and select the one that you feel is right for you and I think he has found that with Tennessee. He loves the staff. The program is on the rise and I believe he feels comfortable with that. Plus, it is SEC football. And it’s no secret, that league is basically the gold standard of college football,” Rockingham head coach Brad Baker said.

Listed at 6-7, 297 pounds, he hit all of the tangible measureables big-time programs are looking for. But Baker says Smith has additional qualities that makes him a once in a generation type of athlete.

“There are a lot of big guys out there, but what separates him is that he moves so well. He has great footwork and understands leverage and how to use those long levers. With a year of strength and conditioning at the college level and maturity and being at the training table, the sky is the limit. He’s only 17 years old. As he matures physically, he could easily put on 35 or 40 pounds and still move extremely well for that body. He’s just very athletic to be so big in addition to being a good kid and hard worker,” Baker said.

With all of the success and excitement surrounding his recruiting journey, it hasn’t been an easy road to securing his future ambitions of being a top caliber athlete. At the age of 13, Smith had to come to terms with the tragic death of his father Michael a little more than two weeks before Christmas in December of 2016.

Smith and his father were very close, and prior to his passing, they often talked about the future and their shared dream of Colby one day getting the chance to play college and professional football.

“I’m really trying to do all I can to play at the next level and I believe this is my calling. I believe I was put on this earth to play football man. This has always been mine and my dad’s dream and it pushes me a lot more just trying to make the dream come true,” Smith said.

Unfortunately, it didn’t happen in his father’s lifetime, but their shared ambition is still on track.

“After my dad passed a few years back, it was really tough because this was always our dream. I was really down at that point and asking god questions of why this happened, but I came to realize that there is a plan for everyone. Everything happens for a reason I believe. The more sacrifices, the better the reward you will receive in my opinion . . . time heals better than anything. Everybody told me that I would get this opportunity, and now that it is actually happening, it’s like surreal. It’s crazy. I’m just very, very blessed,” said Smith.