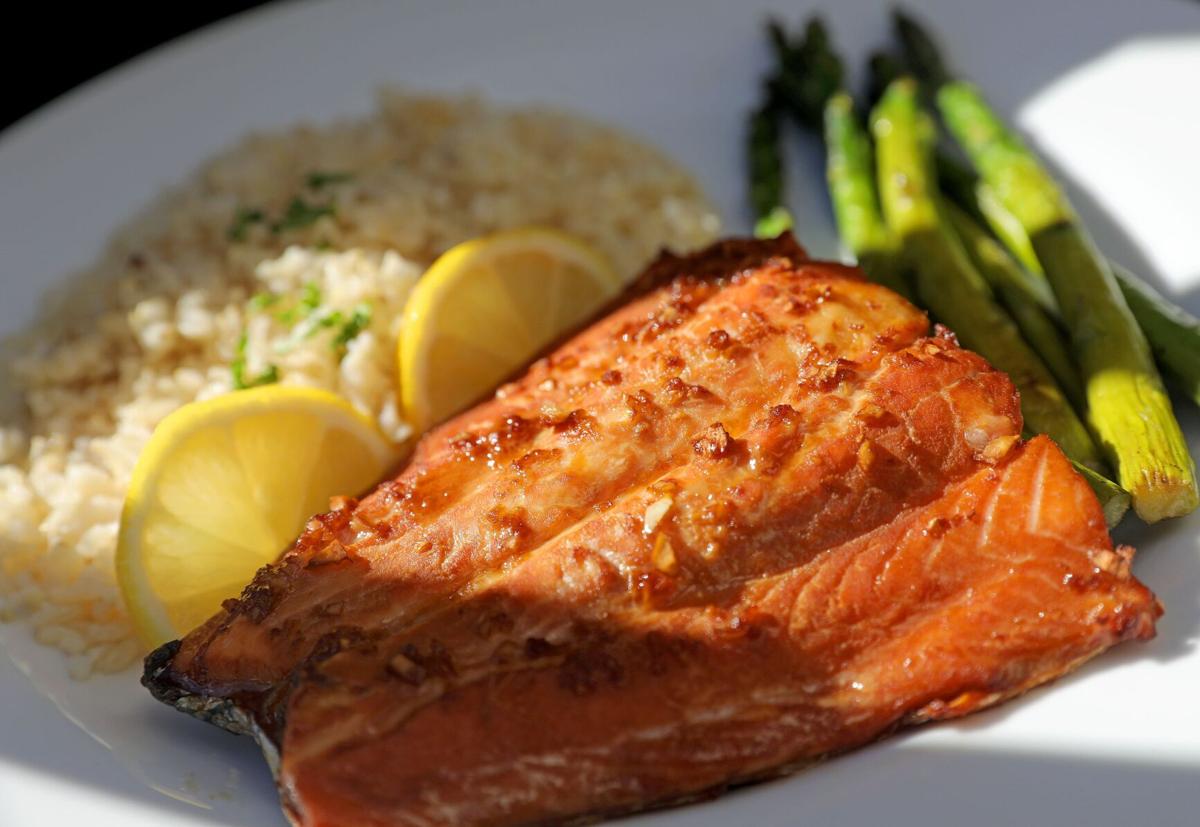 Asian Baked Salmon is a light and healthful meal. 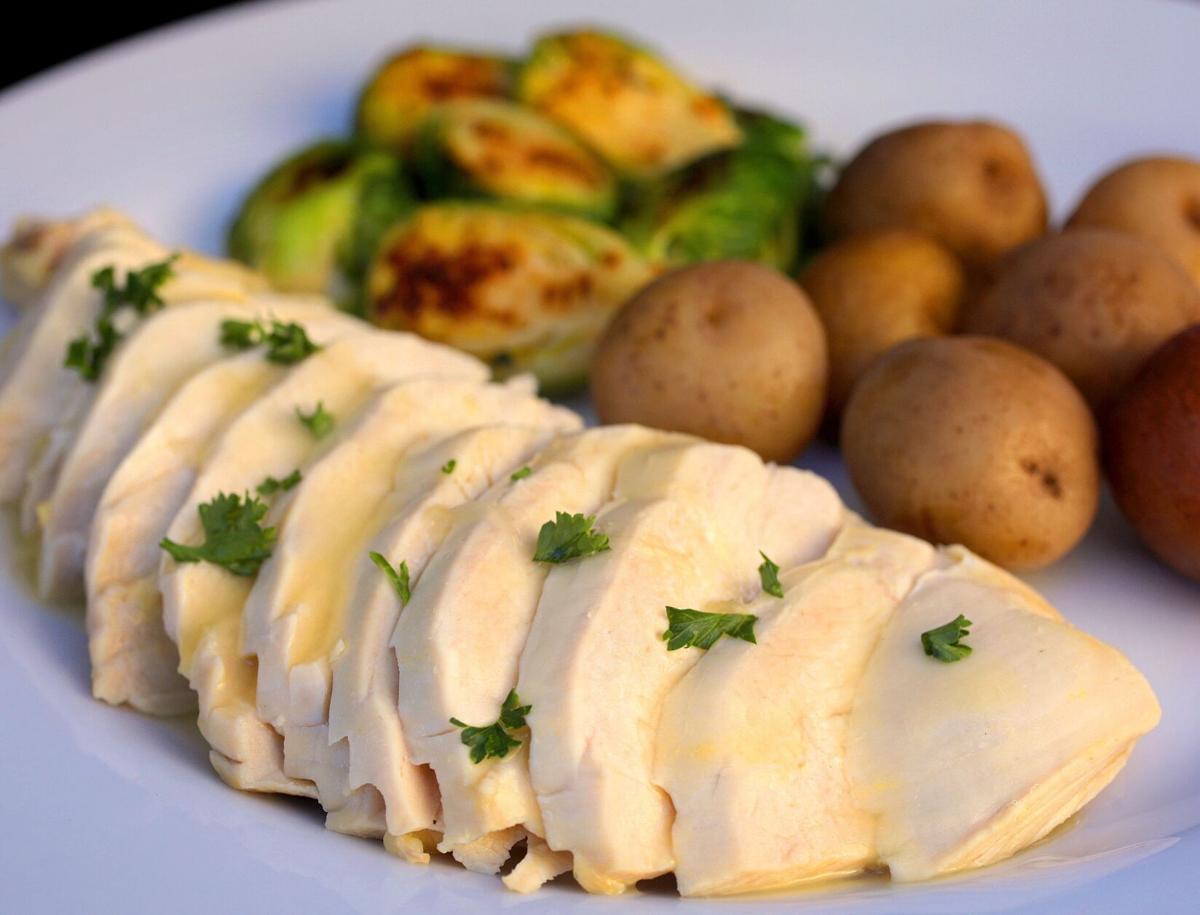 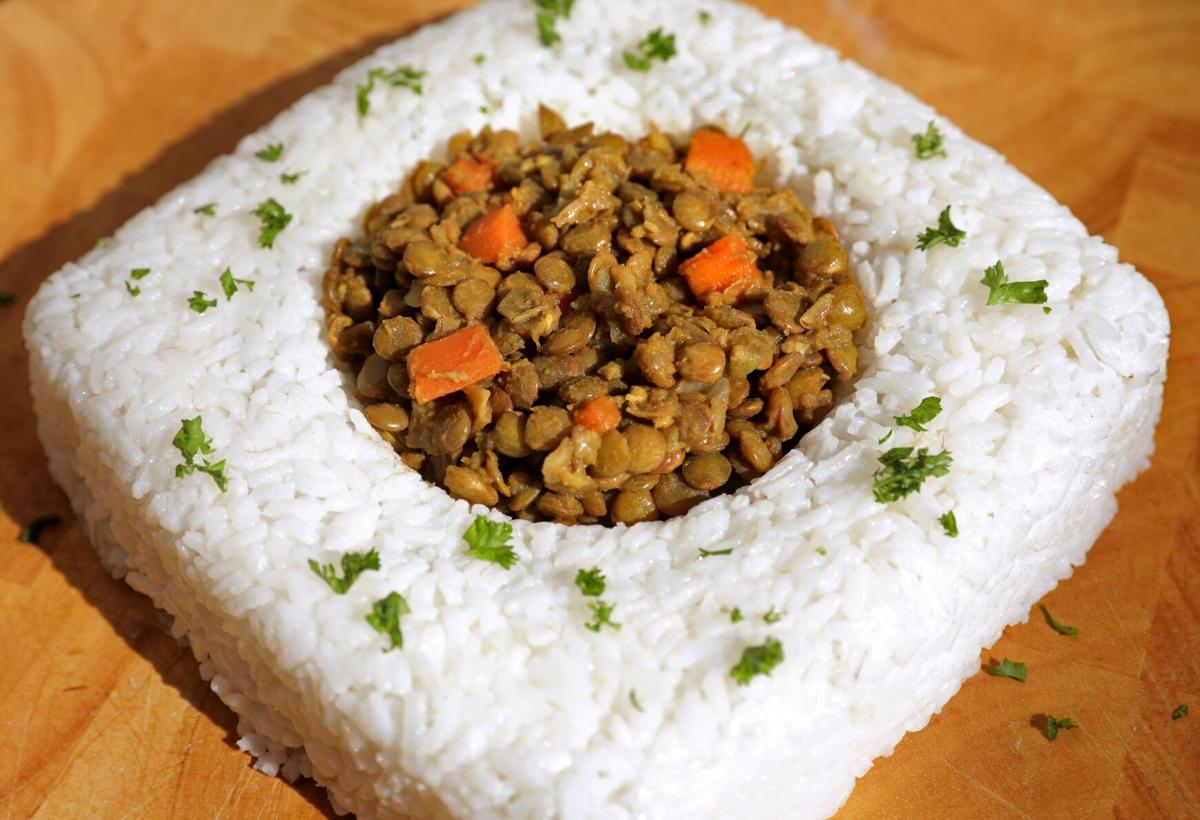 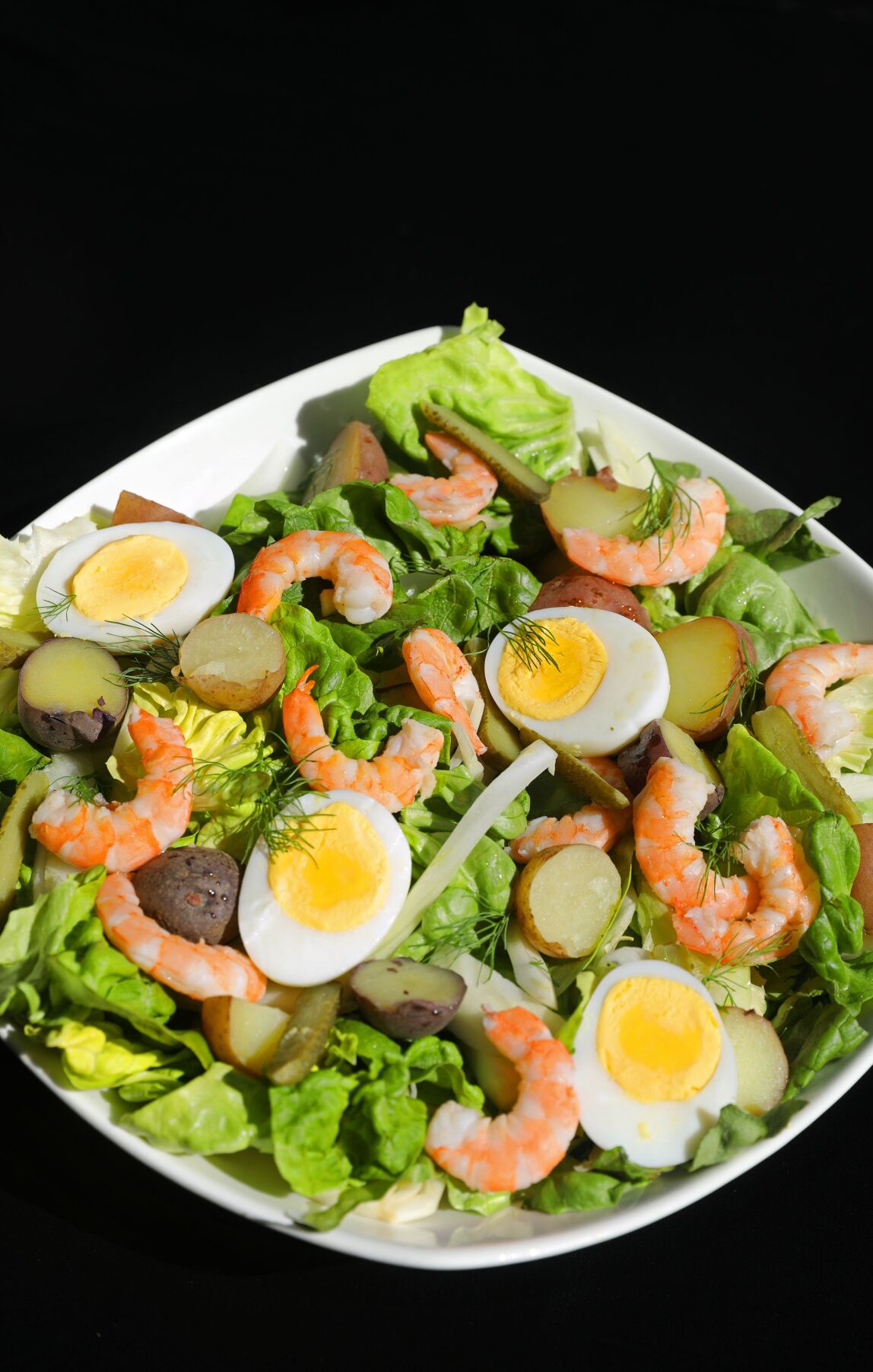 My bathroom scale and I have come to an understanding. I won't stand on it and hurt it anymore if it will stop telling me my weight.

The trick, though, was to create dishes that had a heap of flavor and were not just bland and blah.

The first part of the equation, the part about the food being low in calories, was relatively easy. I started out with main ingredients that are relatively low-cal to begin with — fish, chicken, shrimp and a vegetarian dish featuring lentils. I am uncommonly fond of lentils, and they do not take long to cook.

I cooked these ingredients with as little fat as I could get away with, and no added sugar. I baked the fish, poached the chicken and boiled the lentils and the shrimp; each method helps keep the weight off.

Though the presentations are simple — no fancy sauces, except on the chicken — they are deceptively full of flavor. How I achieved this is no secret; I simply cooked them with powerful aromatics and other ingredients that transferred their taste to the other items.

A case in point is my fish dish, Asian Baked Salmon. All I did for this meal was to marinate a salmon fillet in generic Asian ingredients. When I baked the fish at a high temperature, the top, which had been in the marinade, developed a rich mahogany color and a lovely crunch.

For my marinade, I threw together soy sauce, garlic, minced ginger and fresh lemon juice. I allowed the fish to soak in this mixture for just a half-hour; any longer and the fish's texture would begin to break down and become mushy.

It didn't take long to cook, and when it was done I only needed to top it with sesame seeds and sliced green onions to complete an elegant, healthful meal.

My chicken dish gained flavor from the liquid I used to poach it in. After I thickened it with a cornstarch slurry, that same liquid became a surprisingly excellent sauce. I mean, I thought it would be good, but I wasn't prepared for just how sprightly it would be.

I used chicken broth for the liquid, which is a vast improvement over the more common water. I flavored it with fennel — I love the lively, fresh licorice taste of fennel with chicken — a slug of white wine, thin slices of lemon and not too many onions.

Chicken has a tendency to dry out when it poaches, but I used a method that was new to me to keep it nice and moist. I only simmered the meat for five minutes before taking it off the heat, covering the pan and allowing the liquid's residual heat to finish cooking the chicken.

By itself, the chicken is fine. But when you add the thickened sauce, it transforms into something superb. What I'm saying is: Don't neglect to make the sauce.

Like the chicken, the secret to adding flavor to lentils is to simmer them in a liquid that is bursting with flavor.

I wanted my dish to be vegetarian, so I began with vegetable stock (I usually use chicken stock, which has more depth). This I enhanced with all the usual suspects — onion, carrots, garlic, fresh ginger, curry powder and cumin. I added a sliced serrano pepper, because I like it hot, and I used hot curry powder because I like it very hot.

Serve this dish on plain white rice. Not only is white rice the perfect accompaniment for lentils, it also helps to temper the spice in case you make it too hot.

For my last dish, I turned to Scandinavia, apparently, for Scandinavian Shrimp Salad. The recipe comes to us courtesy of Martha Stewart, and no one does elegant sophistication better than she.

It is a simple dish to make, but beautiful on the plate. You begin with a foundation of buttery, dark-green lettuce; I used Boston lettuce, which tastes like lettuce and not like water. On top of that is a mélange of complementary items: curled pink shrimp, strips of vibrant fennel, soft baby potatoes, tangy cornichons and halved hard-cooked eggs.

All that remains is the dressing. I used a simplified version of my favorite vinaigrette, which is easy to make and low in calories, for a salad dressing.

The vinaigrette that Martha Stewart recommends has more oil in it. I'm sure it tastes great, but if I used it, my scale would never talk to me again.

Place soy sauce, ginger, garlic and lemon juice in a shallow dish, and stir to mix. Add salmon, flesh-side down, and let sit unrefrigerated for 30 minutes. While it marinates, heat oven to 450 degrees. Grease a baking dish large enough to fit the salmon.

Place salmon, flesh-side up, in baking dish and bake until fish comes off in flakes, 12 to 15 minutes.

Garnish with sesame seeds and green onions, and serve.

In a large skillet, heat stock, wine (if using), onion, fennel and lemon over medium heat until it simmers. Gently add chicken breasts — the liquid may not completely cover them — and simmer 5 minutes. Remove from the heat, cover and let stand until fully cooked, about 15 minutes.

Remove chicken to a platter using tongs or a slotted spoon, and tent with foil to keep warm. Bring the poaching liquid to a boil. Mix cornstarch with 3 tablespoons of water and stir into poaching liquid. Cook, stirring frequently, until liquid thickens into a sauce.

Thinly slice chicken crosswise, and serve with the sauce.

Add curry powder, cumin and salt, and stir while cooking for 30 seconds. Add lentils and stir until thoroughly coated with spices. Stir in stock. Raise heat to bring to a boil, then lower to a low simmer. Cook until lentils are cooked and completely soft, about 20 minutes. Add more broth if necessary to keep lentils moist while cooking.

Taste and add salt if needed. Serve over white rice.

¼ cup neutral-flavored oil, such as grapeseed or canola (do not use olive oil)

1 (8-ounce) head lettuce, such as Boston or butter, leaves separated

Fill a large bowl with ice and water. Set aside.

Place potatoes in a medium saucepan; add enough water to cover by 1 inch. Add 2 tablespoons salt. Bring to a boil, then reduce heat to medium-high and cook until potatoes are easily pierced with the tip of a knife, 15 to 20 minutes. Remove potatoes with a slotted spoon, reserving the hot water.

Return water to a boil; add shrimp. Cook, stirring occasionally, until shrimp are bright pink and opaque, 2 to 3 minutes. With a slotted spoon, transfer to the ice-water bath until cool.

Meanwhile, make the dressing: Mix together ¼ teaspoon salt, vinegar and mustard. Slowly add oil while vigorously stirring or whisking to blend the ingredients without separating. Stir in fennel fronds.

Drain the shrimp well. Toss lettuce and sliced fennel with 2 tablespoons of dressing; arrange on a platter. Top with potatoes, shrimp, cornichons and eggs. Drizzle with remaining dressing, and serve.

— Adapted from a recipe from Martha Stewart Living

The capital investment will be among the largest in High Point economic history, but the center will employ few workers.

Hot Shots Distributing Inc. recently bought five parcels in the 800 block of West Green Drive for its new headquarters. The purchase price was $1.2 million and the seller was Redbud LLC, according to the recorded property deed for the transaction.

Asian Baked Salmon is a light and healthful meal.