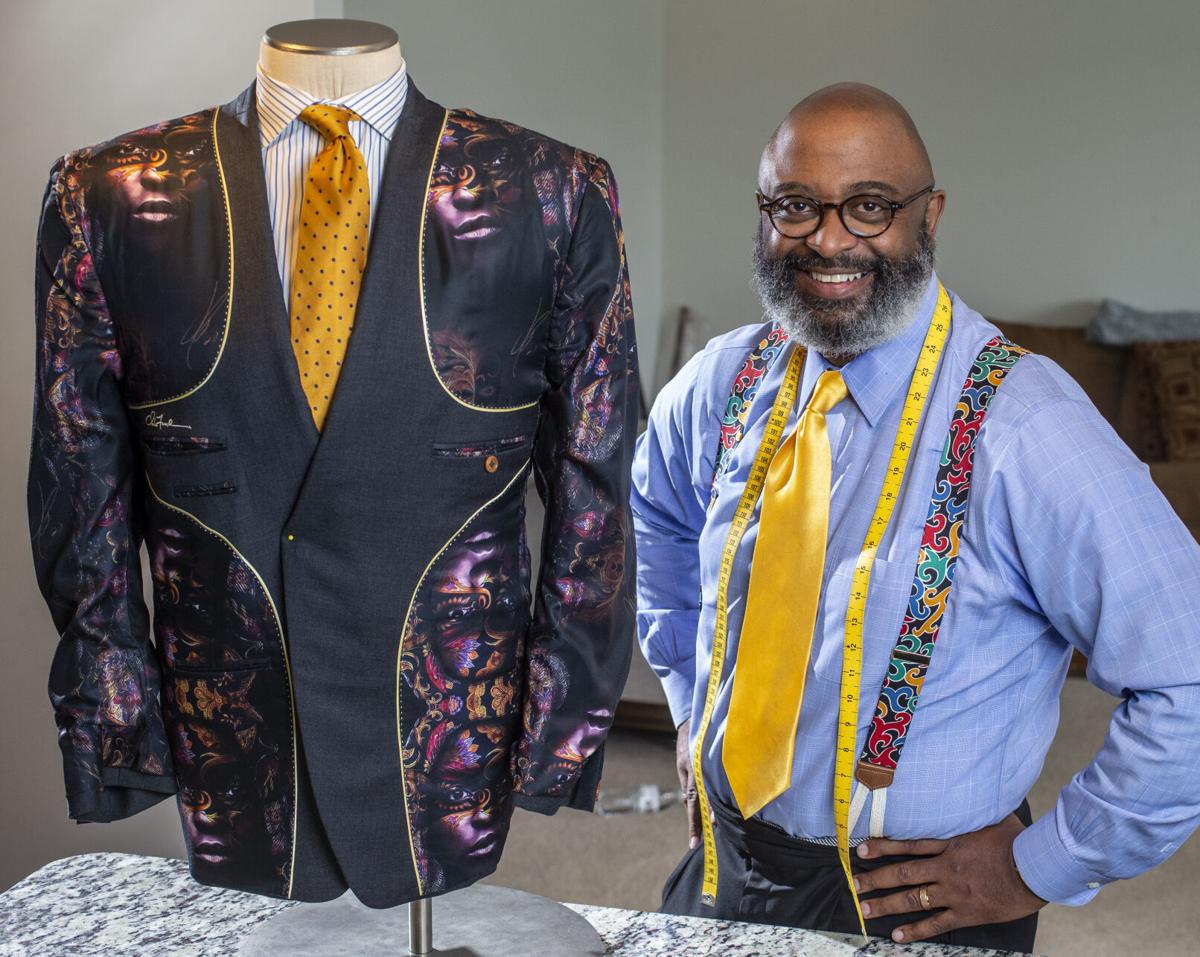 Tailor Charles French with one of his custom made coats showing the art work printed on the silk liner at his home in Greensboro on March 25. 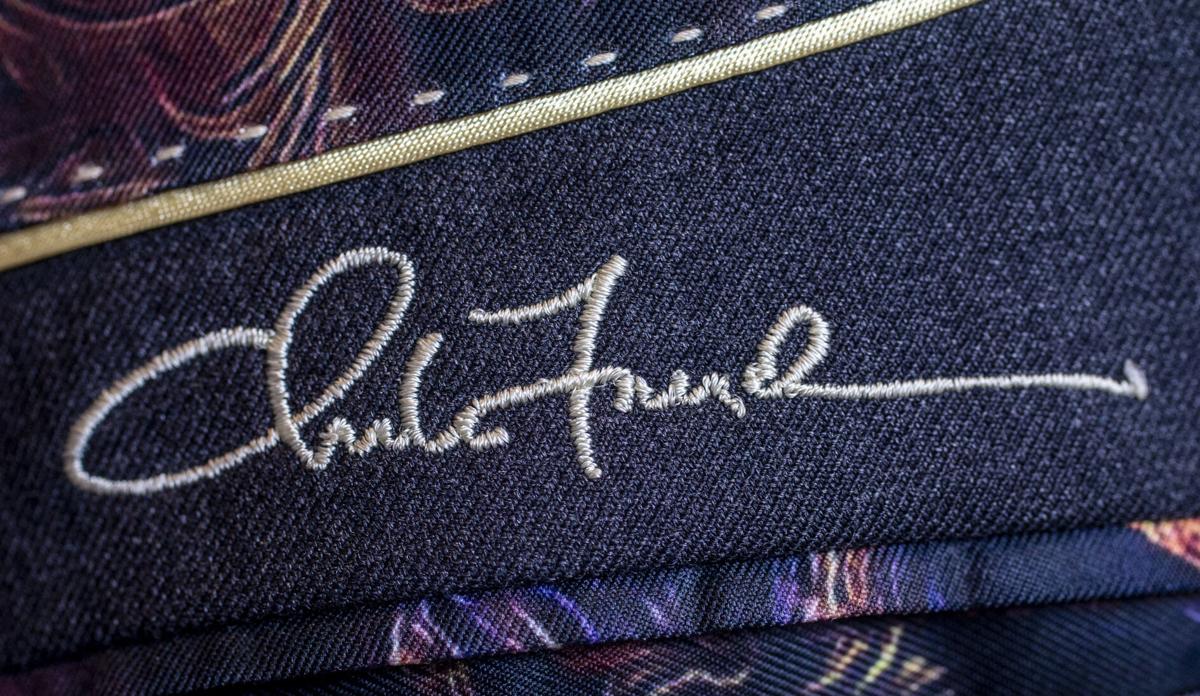 Tailor Charles French monograms his signature in the lining of the coats he custom makes. 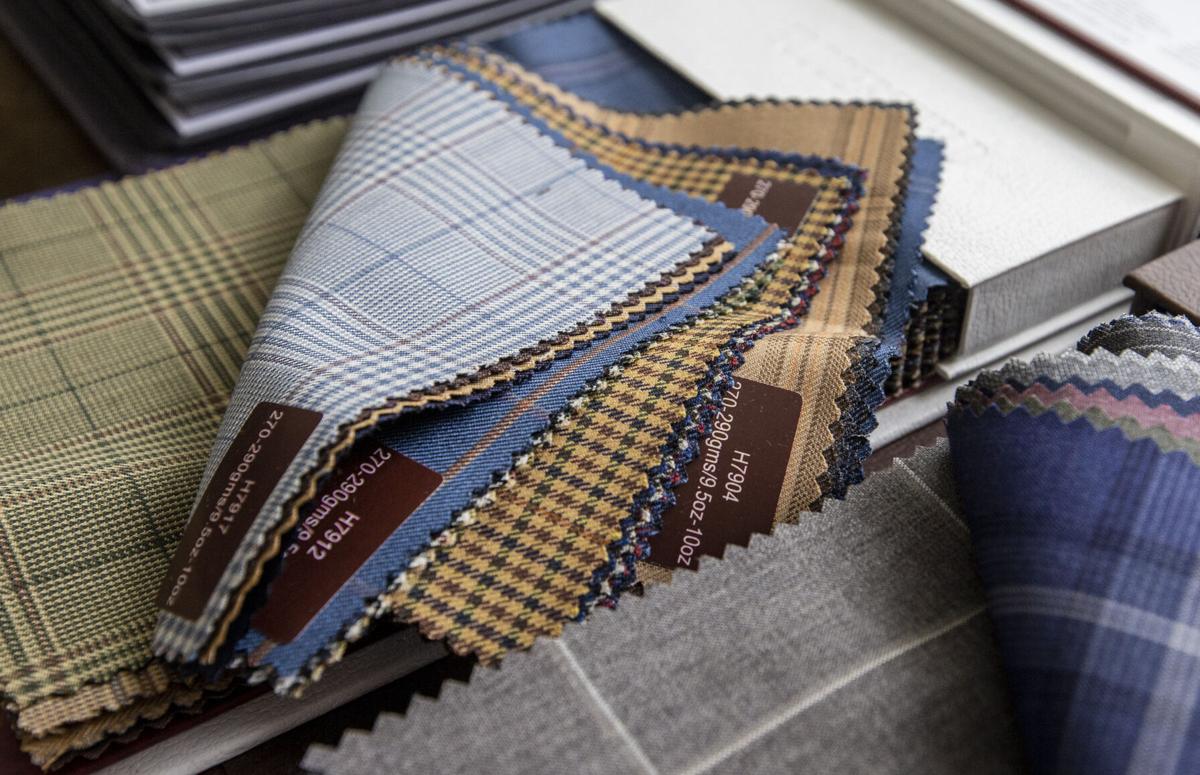 A selection of fabrics for Charles French's custom clothing at Greensboro home. 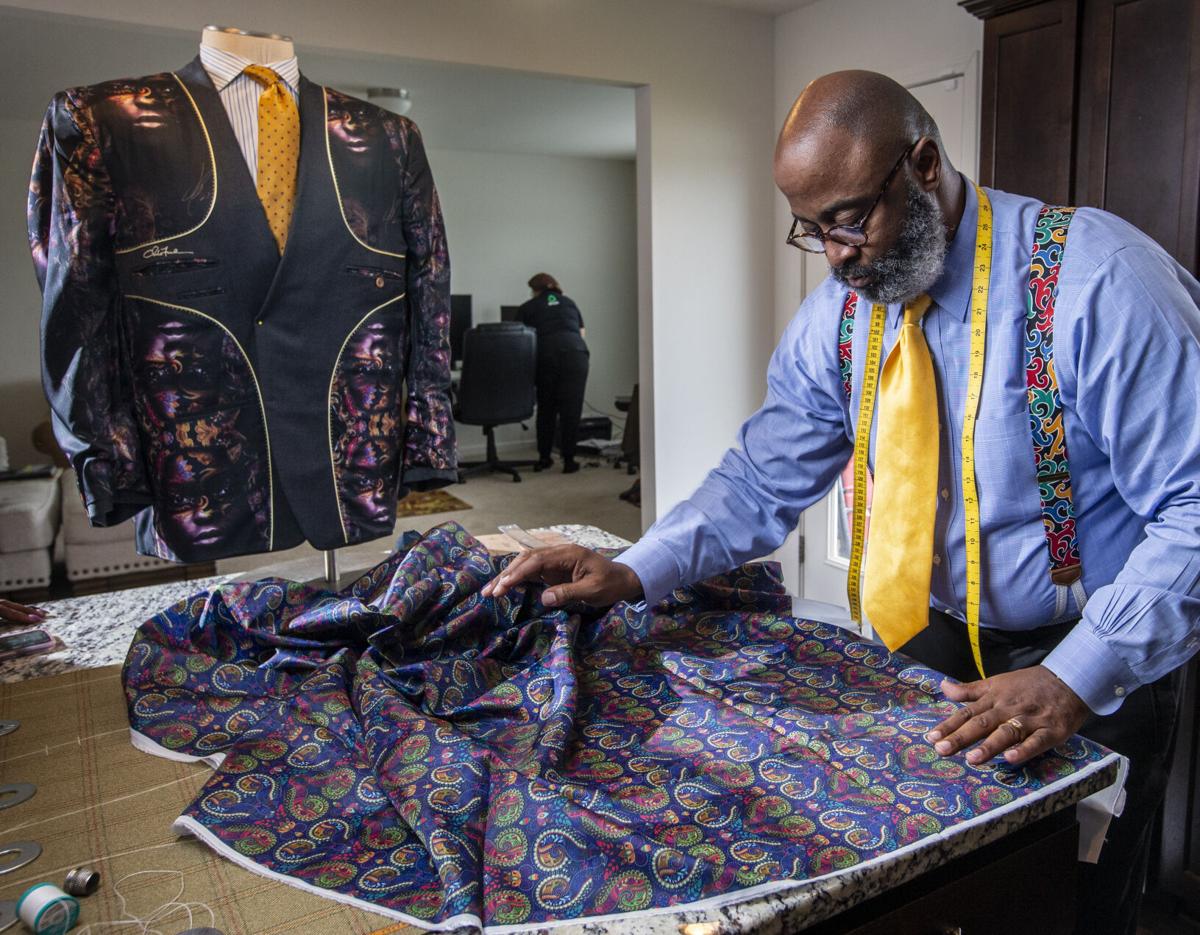 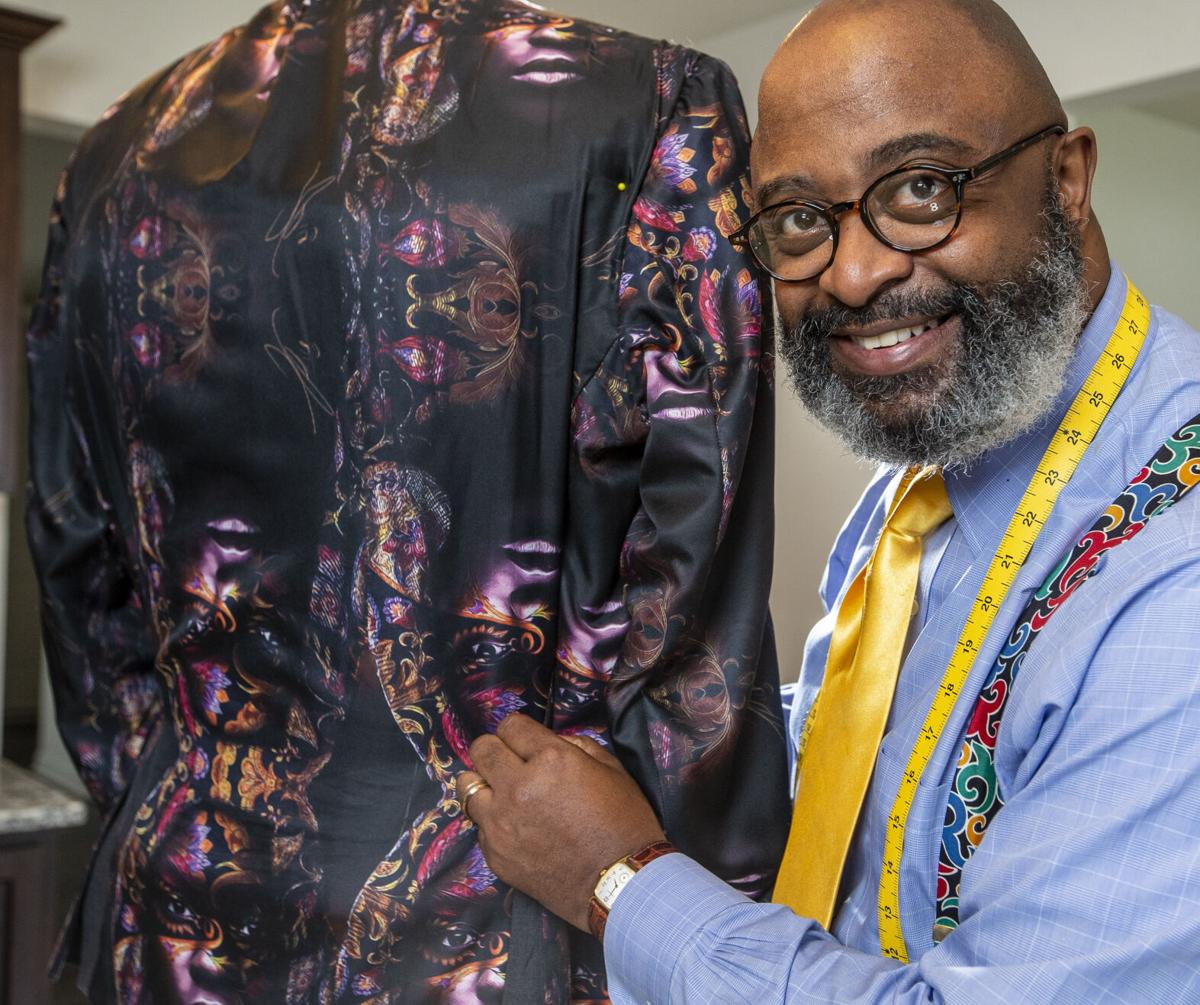 Tailor Charles French with one of his custom made coats showing the art work printed on the silk liner at his home in Greensboro. 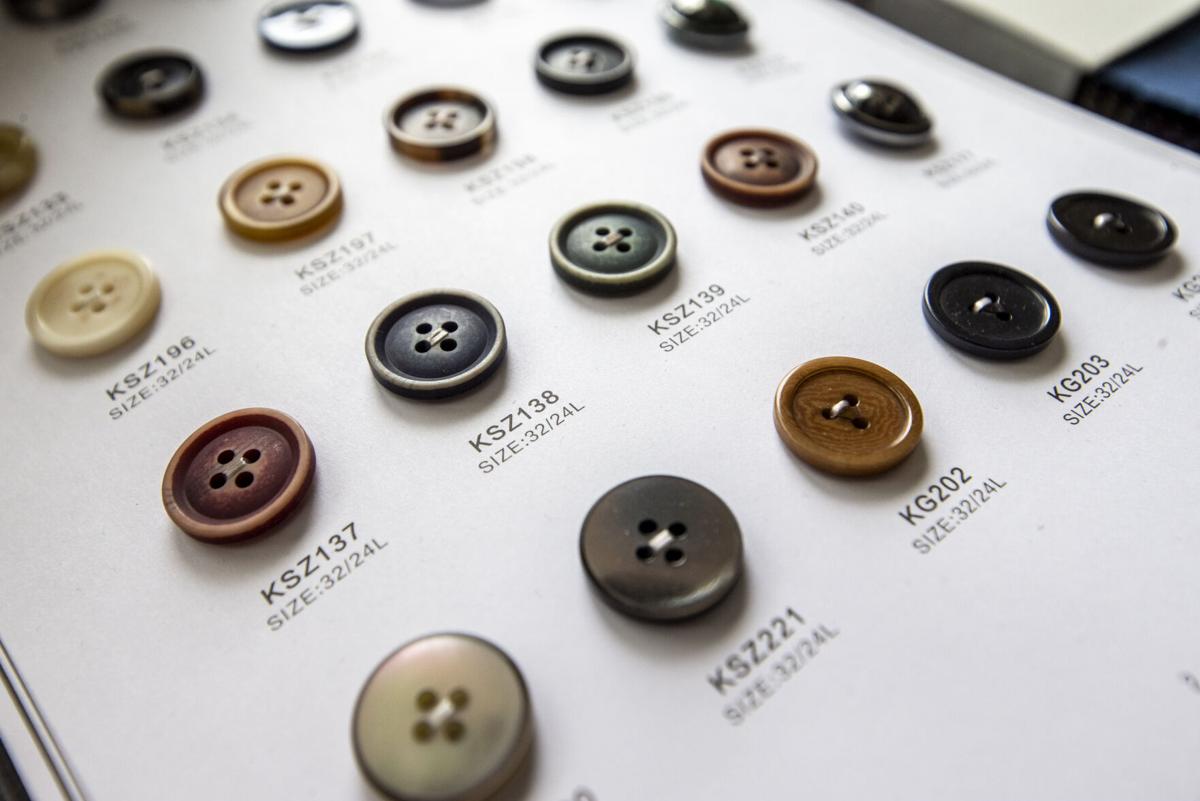 A selection of buttons for Charles French's custom clothing. 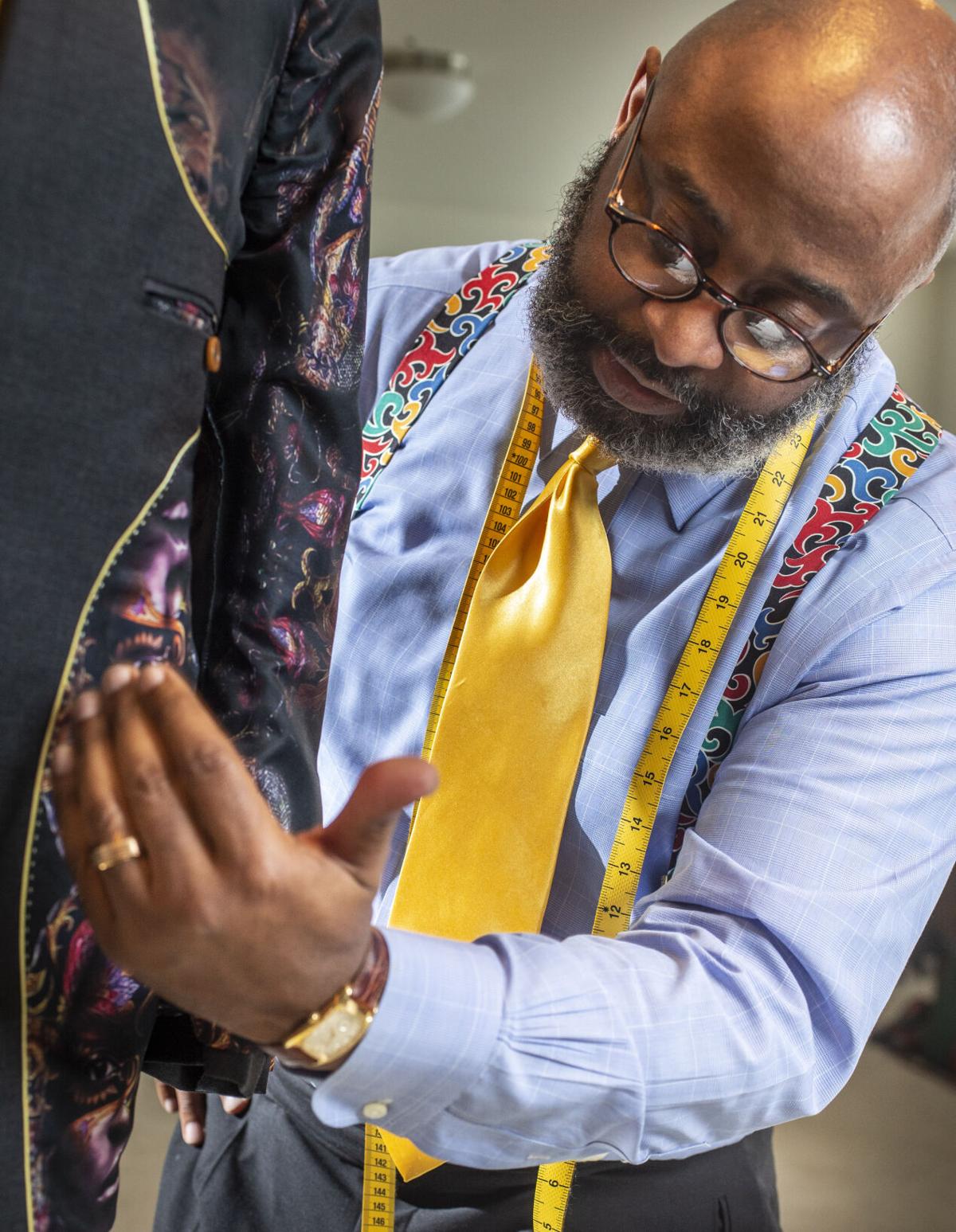 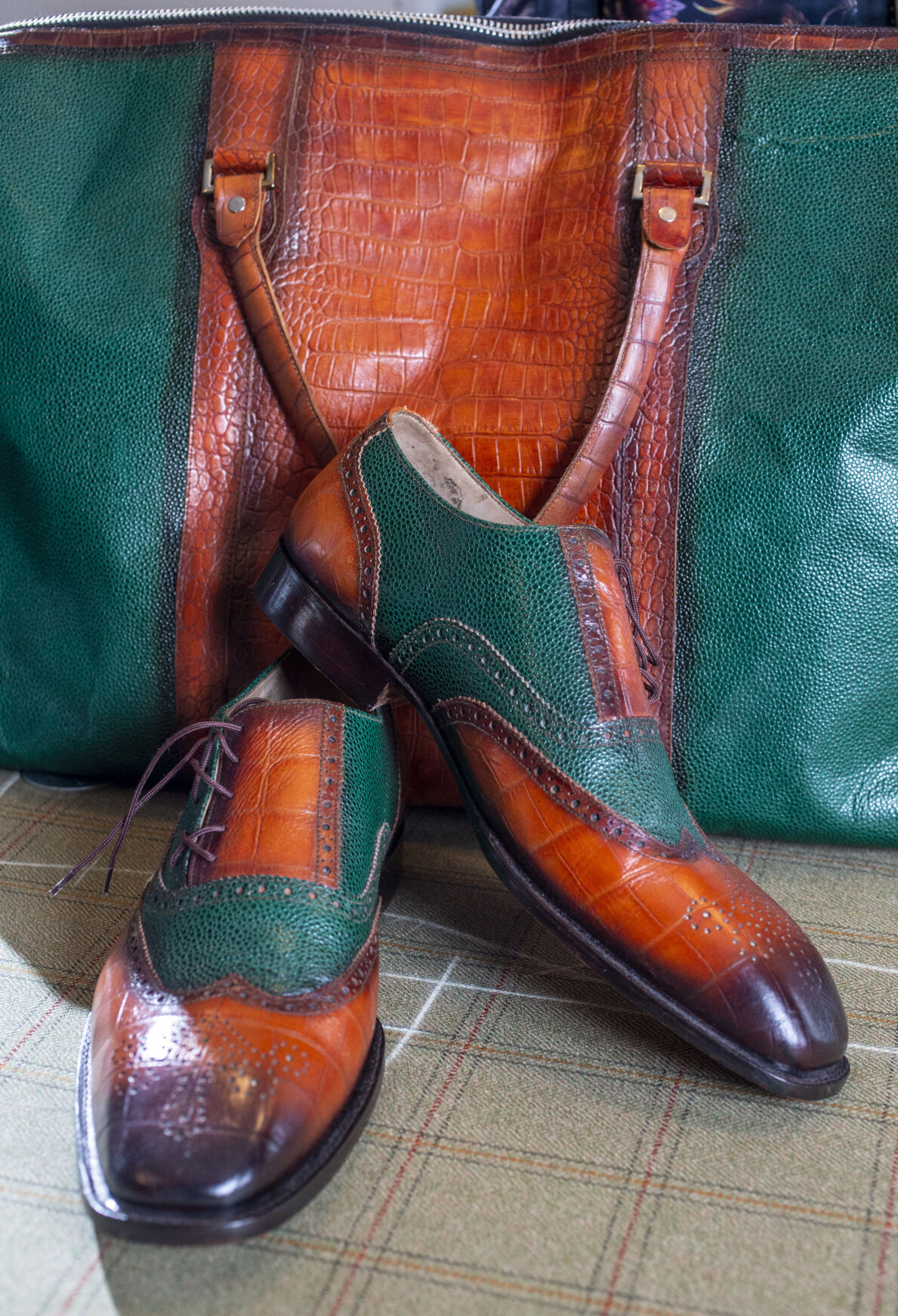 A pair of custom shoes and matching bag made by Charles French at his Greensboro home. 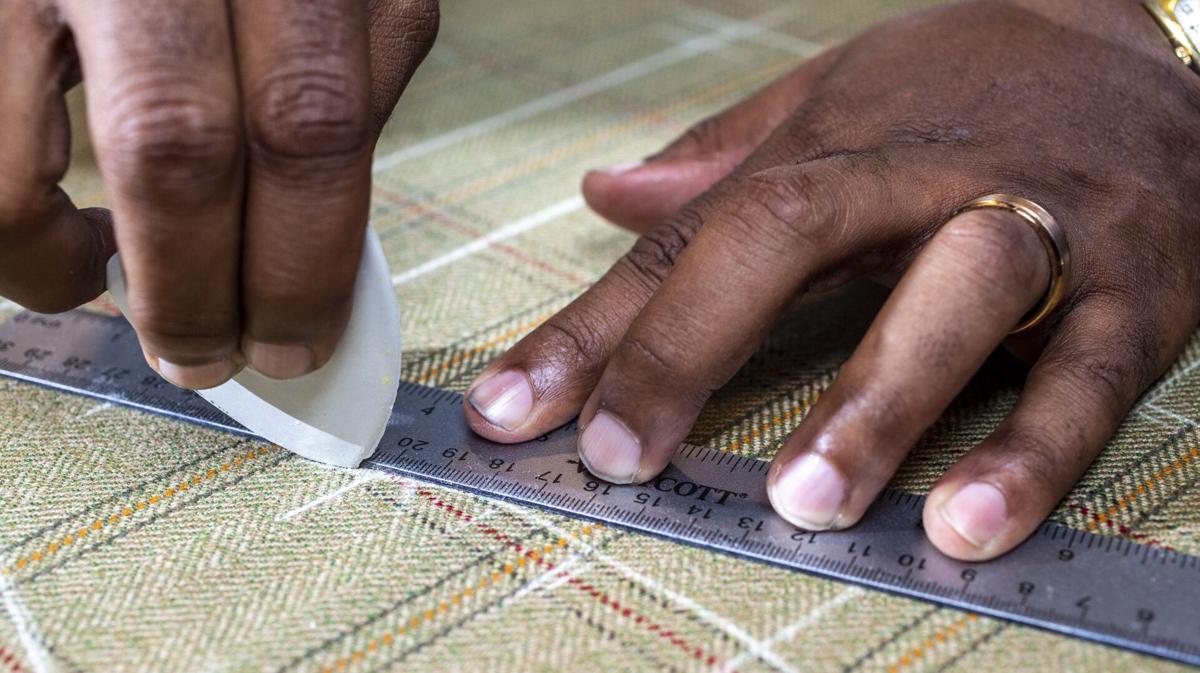 Tailor Charles French marks fabric for vests at his home in Greensboro.

GREENSBORO — Charles French’s “How to tie a bow tie” was once the No. 1 video on YouTube.

It currently has over 4.1 million views.

“I have a photo someone sent to me of Cleveland Cavaliers owner Dan Gilbert on Twitter using my YouTube video,” said French, a former active duty U.S. Marine turned tailor.

For French, clothing has long been a passion. He recalls being at Kiser Middle School and worrying his parents for the latest Jordache jeans.

As a tailor, French is among a dying breed — a skilled craftsmen who’s a reminder of a bygone era.

His custom-clothier business, The Total Image Inc., caters to those with a sense of style: executives, politicians, attorneys and athletes.

Getting to this point, though, was something of a circuitous route.

After leaving the Marines in 2000, French learned to sew the new old-fashioned way — on YouTube.

He put a post on Facebook asking if anybody had a sewing machine they wanted to part with.

That he would go from being a Marine to learning to sew hardly raised an eye among his friends.

“Because we are trained for attention to detail,” French said of being a Marine, and then laughed.

He even learned to thread the machine through a tutorial.

“No one in my family knew how to sew,” French explained.

French once worked at an S&K Menswear store at Four Seasons mall and found he was good at helping customers put together outfits.

“They would come back and ask for me,” French said. “I figured I had something going on, but I didn’t know what it was.”

French eventually tried his hand at opening a clothing store of his own in the late 1990s.

“When the economy failed, I shut everything down,” French said.

He prayed about his next move.

Then he decided he’d learn to sew and design his own made-to-measure clothing.

He started with neckties and bow ties. The first necktie he sold to a friend.

“He still has that thing,” French said. “It may have been uneven on one side, but I was so proud of it.”

Over the years he started getting compliments and business for tailored outfits.

“It motivated me and gave the confidence I needed to move forward,” French said.

And he found out he could come up with designs that others liked.

Recently, French tried something new by designing the lining of a jacket with photos of a client’s grandchildren. The man was brought to tears when he saw it.

“I just knew that his grandkids are his heart,” he said. “He was very emotional in the final fitting. He said, ‘This really meant a lot to me.’”

Business slowed during the pandemic, but the clothier has once again begun meeting people in their homes.

He also packs up his mannequins, measuring tape and swatch books for trunk shows.

These days, the materials he orders may be local or come from as far away as Italy. He also has his own line of signature clothing and sells accessories.

His is still a very personal business. Making people look good in their clothing, he said, means knowing not only what they are trying to accomplish, but their personal style.

He once designed a necktie and matching pocket square for award-winning jazz singer Gregory Porter.

“Over the years, I’ve seen him in photos with the necktie and with the pocket square,” French said. “That really pleased my heart.”

Three men have been charged with felony breaking and entering into the Valero convenience store on Northwest Boulevard, according to a release from the Newton Police Department.

From May 14-16 and May 19-23, life-size, roaring and moving mechanical dinosaurs will roam free on the coliseum grounds.

Late Friday, the N.C. Alcoholic Beverage Control Commission said in a release it has suspended the ABC permits for the Greensboro nightclub at 221 S. Elm St.

Officers responded to the area of West Wendover Avenue and Eastchester Drive after receiving calls of shots being fired between two vehicles.

School of rock: Music video from Irving Park students is their way of telling teachers 'thank you'

The group is looking to attract back to the city those between the ages 30 to 55 who were born here or attended college here, or professionals who formerly lived here. Earlier this month, it announced that 10 people had returned or committed to returning.

Tailor Charles French with one of his custom made coats showing the art work printed on the silk liner at his home in Greensboro on March 25.

Tailor Charles French monograms his signature in the lining of the coats he custom makes.

A selection of fabrics for Charles French's custom clothing at Greensboro home.

Tailor Charles French with one of his custom made coats showing the art work printed on the silk liner at his home in Greensboro.

A selection of buttons for Charles French's custom clothing.

A pair of custom shoes and matching bag made by Charles French at his Greensboro home.

Tailor Charles French marks fabric for vests at his home in Greensboro.