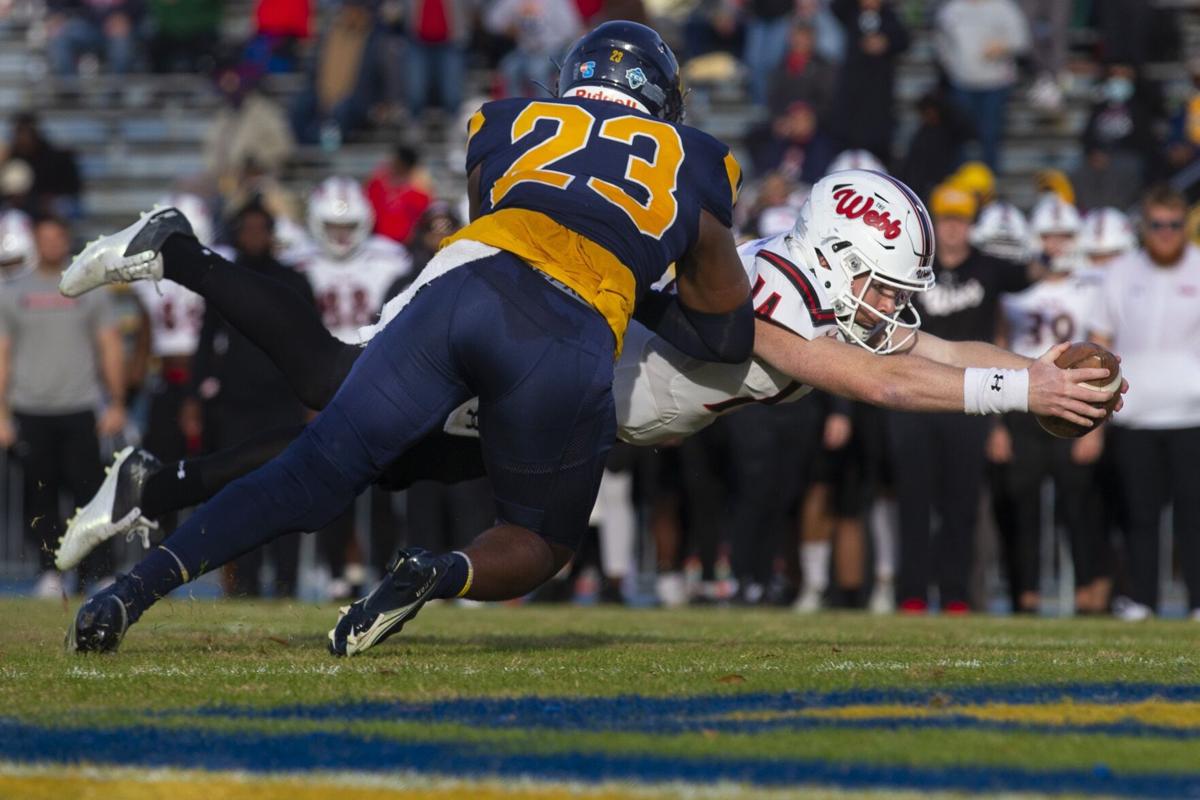 Gardner-Webb quarterback Bailey Fisher dives into the end zone ahead of N.C. A&T’s Alex Fumbah during the third quarter of Saturday’s game at Truist Stadium in Greensboro. 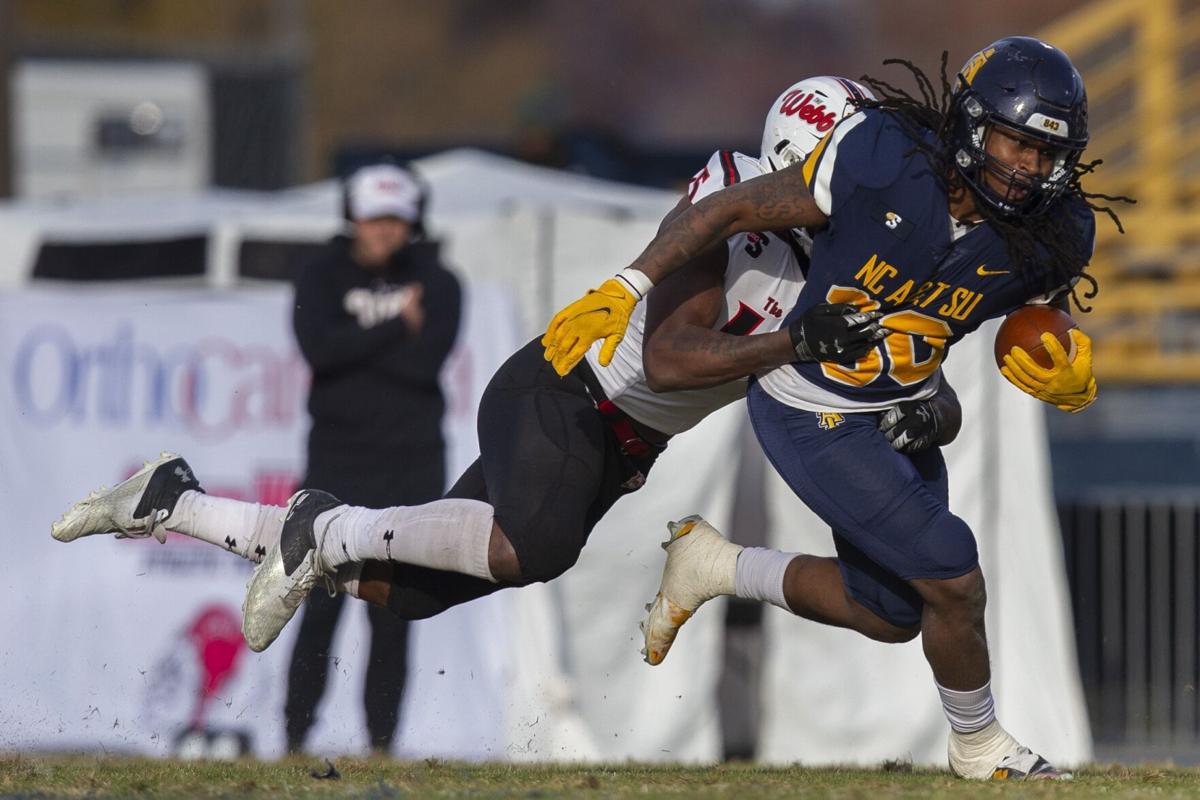 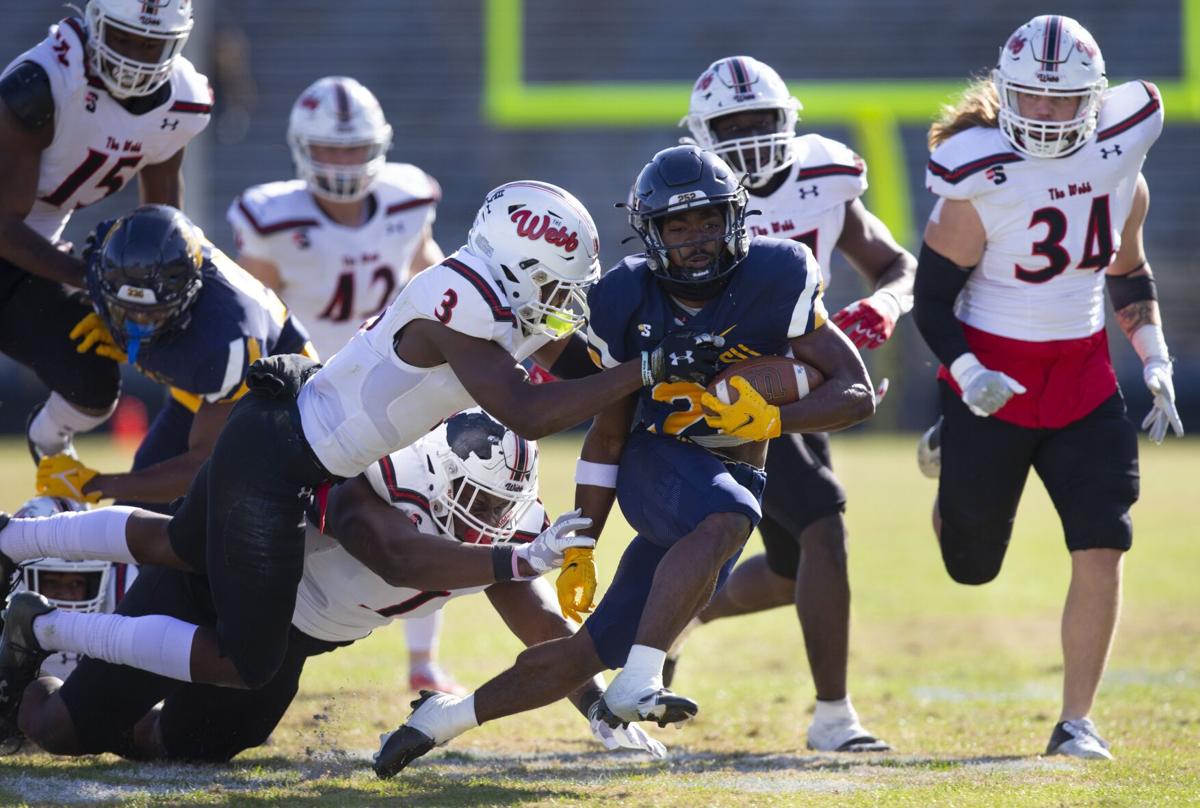 A&T's Kashon Baker runs the ball through a slew of Gardner-Webb defenders during the first quarter at Truist Stadium on Saturday. 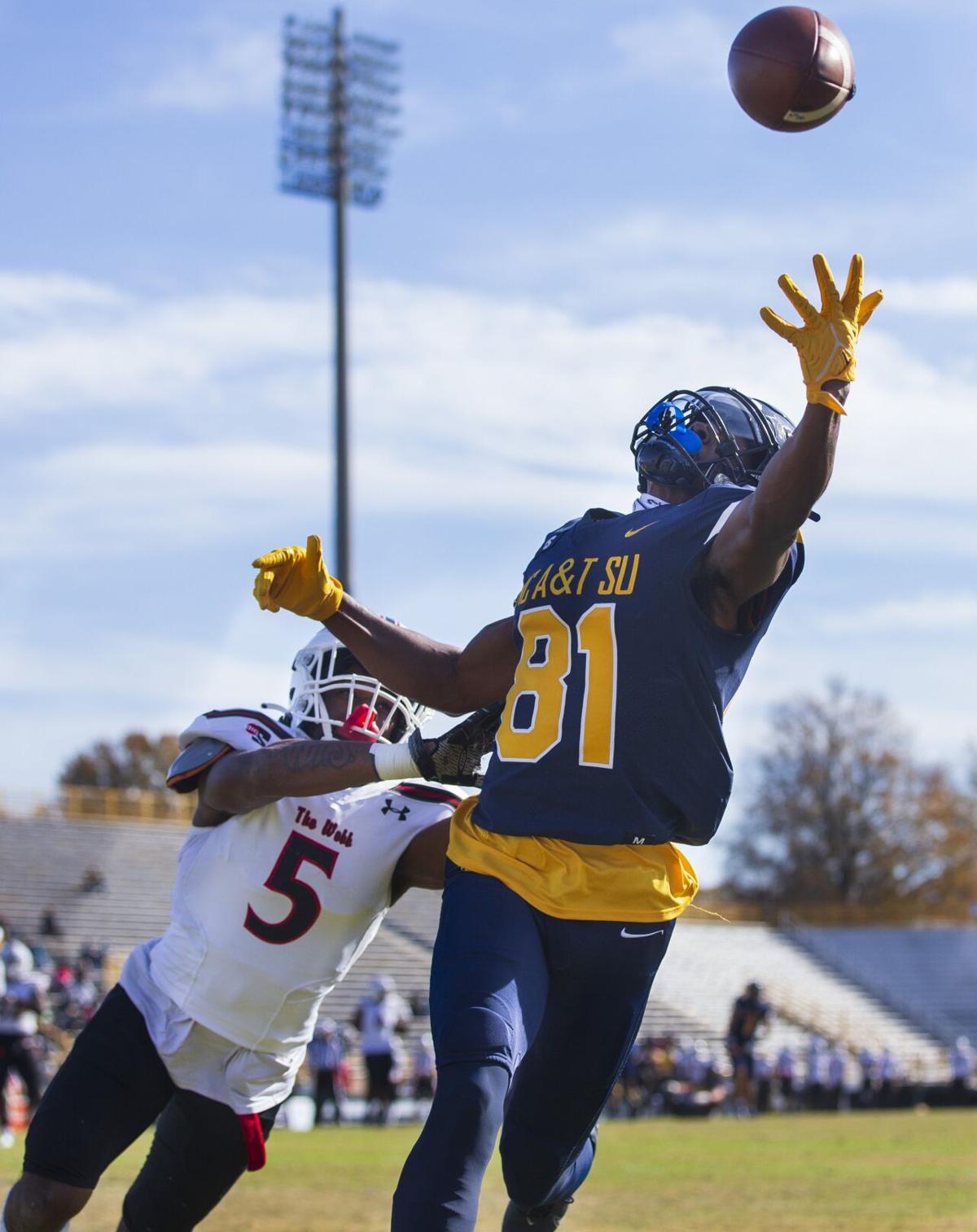 A&T's Ron Hunt stretches out but can't quite make a touchdown catch while defended by Gardner-Webb's Deonte Grier during the first quarter at BB&T Stadium in Greensboro, N.C., on Saturday, November 20, 2021. 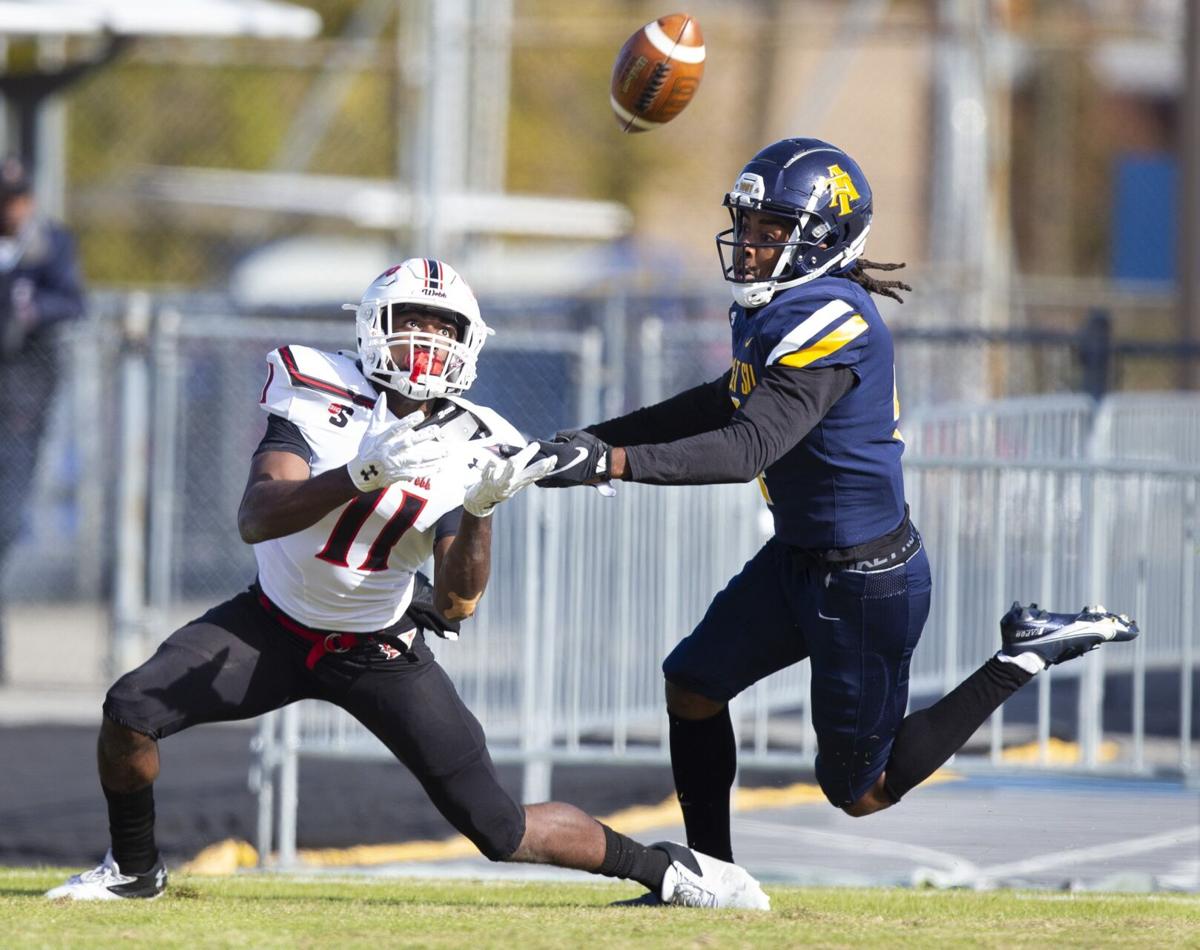 Gardner-Webb's Justin Jordan catches the ball for a touchdown while closely defended by A&T's Miles Simon during the second half at BB&T Stadium in Greensboro, N.C., on Saturday, November 20, 2021.

GREENSBORO - When it was over, when the darkness and chill of late autumn descended on the dormant brown grass of Truist Stadium, the proud Aggies were left to ponder the meaning of their first Big South football season.

It’s going to be a long winter.

A 5-foot-11 quarterback named Bailey Fisher completed 21 of 31 passes for 259 yards and three touchdowns, and last-place Gardner-Webb scored 28 points in the fourth quarter on the way to a 35-27 victory over N.C. A&T on Saturday.

A&T finishes its first season since leaving the MEAC with a 5-6 overall record, 3-4 in its new league. It’s the first sub-.500 season since coach Rod Broadway’s rebuilding project began with a 5-6 record in 2011.

Sam Washington was there for both. He was Broadway’s top assistant back then, and he wrapped up his third season as the head coach this year.

“Tough ballgame,” Washington said after Saturday’s loss. “Tough, tough ballgame, and one I thought we had in hand. … We let one get away from us today. And I hurt for our seniors. We wanted them to go out on a high note. There might not sound like much of a difference between 6-5 and 5-6. But it means a lot to us.”

A lot of those seniors who said goodbye to A&T played in three Celebration Bowl victories.

But that was then, and this is now. And now the Aggies are playing in a much better league than the MEAC, and doing so after a year of inactivity wrought by a pandemic.

“This league is very competitive. The difference between the top and bottom of the Big South is very thin,” Washington said. “This team (Gardner-Webb) was in last place, but they had (first-place) Kennesaw State beat before it slipped away on them. The parity is unbelievable, better parity than any conference I’ve ever been in.

“It’s more of a quarterbacks’ league. Especially compared to the MEAC, quarterback play would be the largest difference.”

Look no farther than Gardner-Webb (4-7, 2-5), a sub-.500 team whose junior quarterback, Fisher, finished the season with 2,335 passing yards, 18 TDs and just five interceptions.

“You don’t want to play three quarterbacks in one particular game, but it is what it is,” Washington said. “… There’s a lot we’ll change for next year. But the core of what we do will remain the same. That will always be the same. We do need to push a little more, and we have got to get better on the back end of our pass defense. The front end is stable, but the back end needs work. Offensively, we’ve got to get better at the quarterback position. Period. It’s obvious we have not played well at that position.”

Ifedi, a senior quarterback, scored on an 11-yard run on fourth down on the first play of the fourth quarter, giving A&T a 20-7 lead.

Gardner-Webb oustscored A&T 28-7 the rest of the way.

It was the season in a nutshell: A&T was competitive, had its chances and fits right in the Big South, but the new league’s differences require adjustments.

“We learned a lot about ourselves this year,” Washington said. “The positive is we won’t quit. But we’ve got to be more driven. We’ve got to be more relentless. I hate to use the word ‘content,’ but I’m not sure we pushed as hard as we have been pushing in years past. Those are questions you ask yourself when you lose.”

Mid-season losses to front-runners Kennesaw State and Monmouth killed any hopes of postseason glory the Aggies have grown accustomed to.

“The vibe absolutely changed after those games,” Washington said. “That’s a tough sell as a coach. After you’re out of (contention), that’s when you have to do the most work. When you drop those kinds of games to those kinds of teams. And we were competitive in both of those games. This team had never experienced failure or loss to that magnitude. That’s tough.”

This season snaps a string of five straight appearances in either the Celebration Bowl or the FCS Playoffs.

“This is the first time in a long time we don’t have postseason play ahead of us,” Washington said. “That makes it very bitter. But we’re also at that point where I want to start over. I want another chance at it, and that chance starts now. Monday morning, we’ll start working on next season.”

The Aggies honored 14 seniors before the game, young men who carried the program to new heights. But Washington’s focus turns now to the 21 freshmen and 16 sophomores who dressed out for the last day of the first Big South season.

As a yellow full moon rose over the darkened stadium and air grew even colder, A&T settled in for a long winter and the promise of hope in the spring.

MLB lockout: What you need to know

MLB lockout: What you need to know

The graduate student, who played a key role in the Aggies' recent success, died of complications from an aneurism.

A guide to the bowl season for North Carolina’s college football teams:

Pitt-Wake Forest in the ACC title game: Here's what the beat writers are talking about

The ACC football championship game is here, and Wake Forest is in it.

Wake Forest to battle Texas A&M in Gator Bowl on Dec. 31 in Jacksonville

Two coaches who faced both teams break down the NCHSAA Class 3-A West football final between Belmont South Point and Dudley.

GREENSBORO – Susan Braman, the only manager of the Greensboro Aquatic Center in its 10-year history, will retire Dec. 31.

Gardner-Webb quarterback Bailey Fisher dives into the end zone ahead of N.C. A&T’s Alex Fumbah during the third quarter of Saturday’s game at Truist Stadium in Greensboro.

A&T's Kashon Baker runs the ball through a slew of Gardner-Webb defenders during the first quarter at Truist Stadium on Saturday.

A&T's Ron Hunt stretches out but can't quite make a touchdown catch while defended by Gardner-Webb's Deonte Grier during the first quarter at BB&T Stadium in Greensboro, N.C., on Saturday, November 20, 2021.

Gardner-Webb's Justin Jordan catches the ball for a touchdown while closely defended by A&T's Miles Simon during the second half at BB&T Stadium in Greensboro, N.C., on Saturday, November 20, 2021.