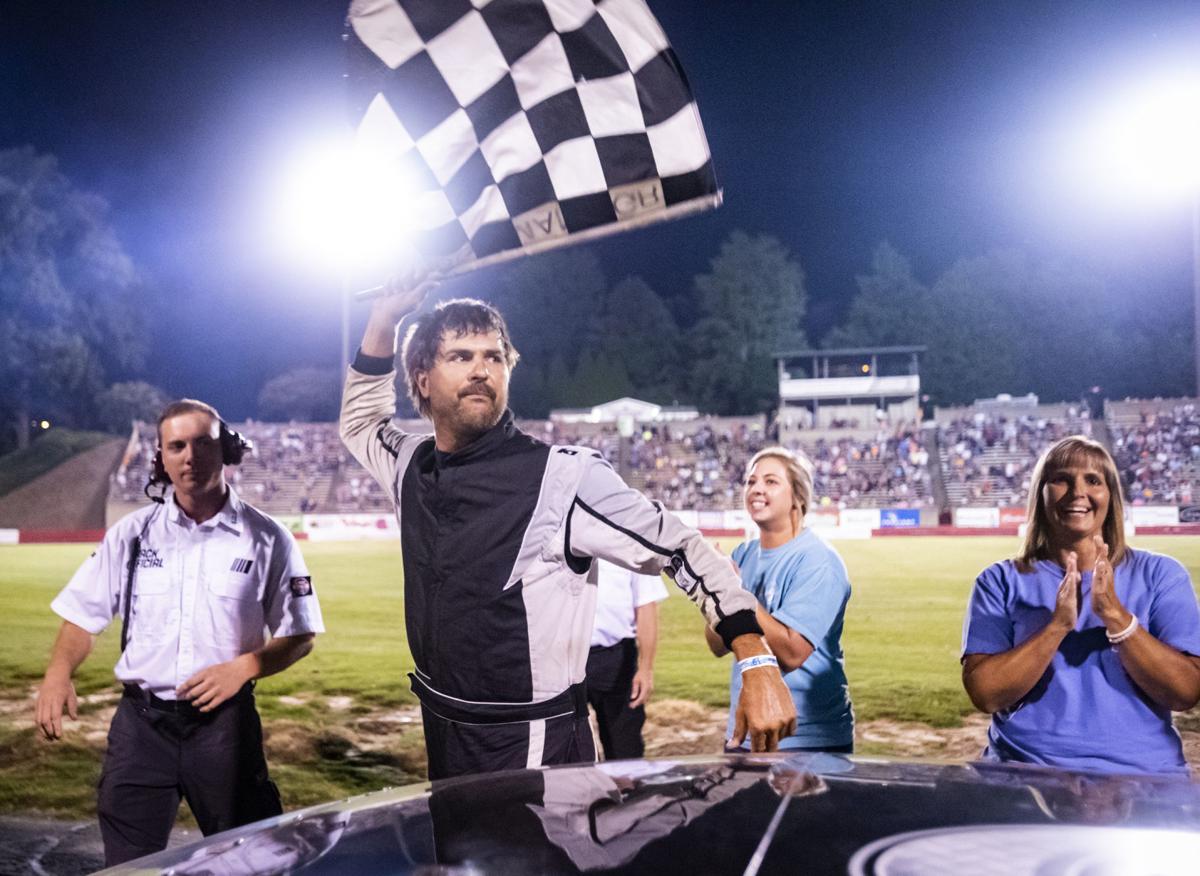 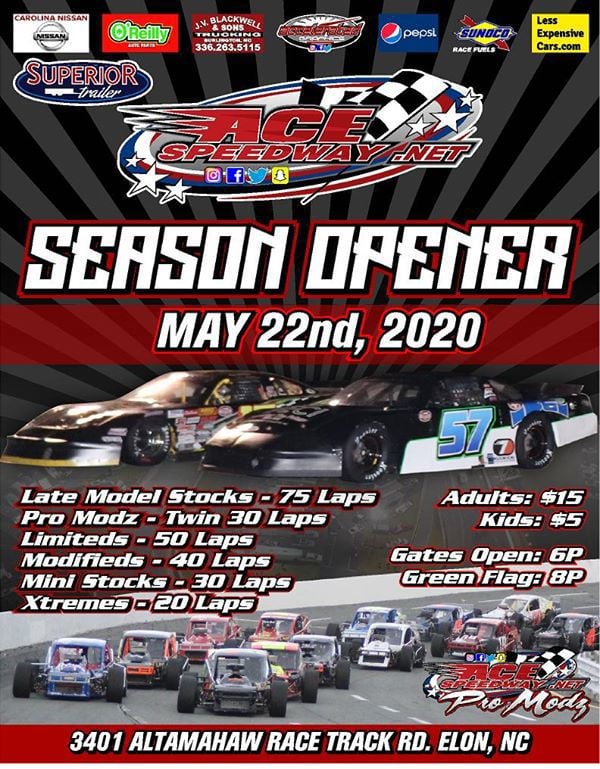 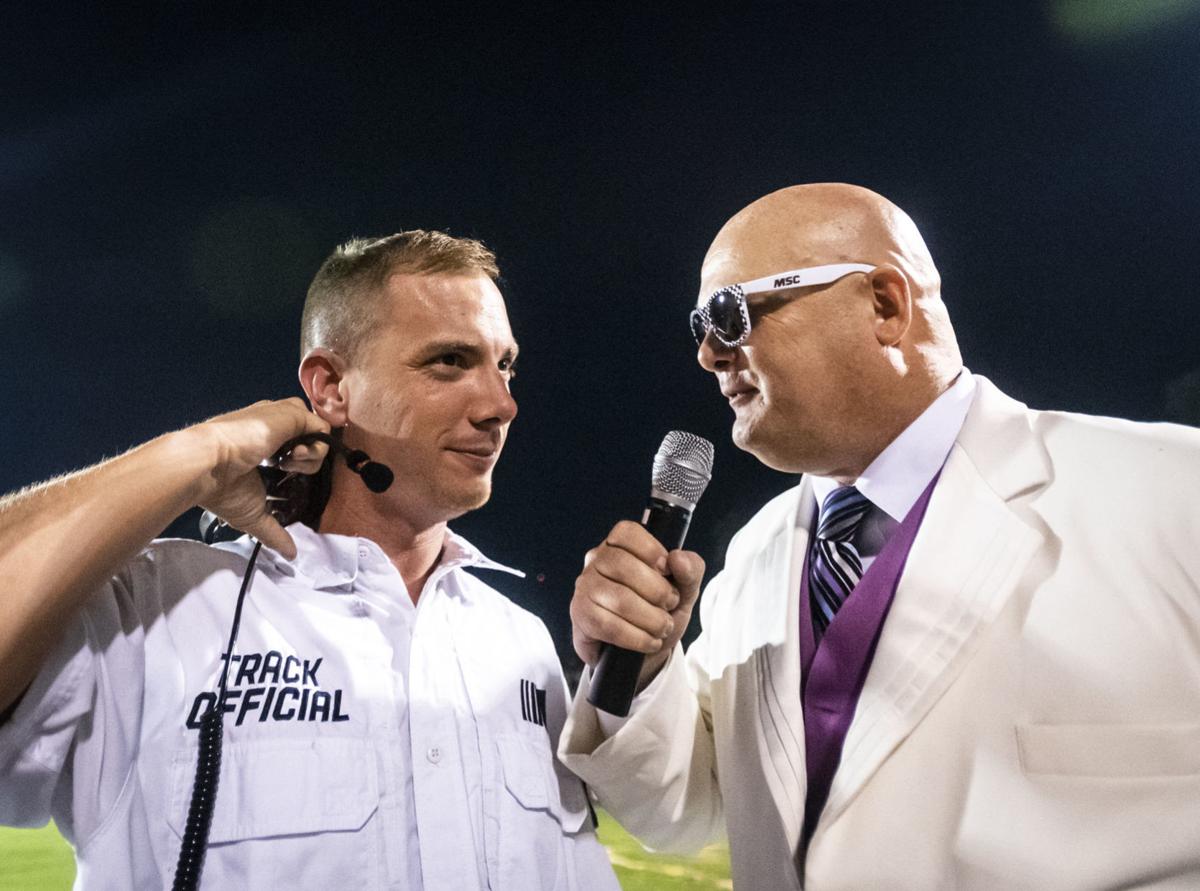 Ace Speedway officials in Alamance County plan to open on Saturday night, in what is expected to be one of North Carolina's first sports events with spectators amid the COVID-19 pandemic.

Governor Roy Cooper’s Phase Two of slowly reopening the state will begin at 5 p.m. Friday. While outdoor gatherings will be limited to 25 people, an exception is permitted for entertainment and sporting venues with at least two entrances and exits and a stated fire capacity of at least 500.

The owners of Ace Speedway, Robert Turner and his son Jason Turner, say the races, with a "reasonable capacity" of spectators, will go on as planned on the 50-acre property. Their contention is there's enough space to accommodate the social distancing guidelines.

“I’m going to race and I’m going to have people in the stands,” Robert Turner told the Times-News on Wednesday night. “And unless they can barricade the road, I’m going to do it. The racing community wants to race. They’re sick and tired of the politics. People are not scared of something that ain’t killing nobody. It may kill 0.03 percent, but we deal with more than that every day, and I’m not buying it no more.

“I’ve got a business to run and a job to do, and when I can’t run my business and I can’t go to my job and make a full paycheck, I’m in jail already. So getting behind bars does not scare me. I’m going to speak my piece, and we’re going to do something.”

Robert Turner did not return a phone message this morning. Messages today to the governor's office and Alamance County government have not been returned.

On Ace Speedway's Facebook page, Jason Turner suggested the track's seats would not be full.

"We will operate at a reasonable capacity so that social distancing can be observed," Turner wrote. "A hard number was not presented to us. We do not mean to cause a panic or a fear of not getting in. There are enough tickets to go around."

Jason Turner also wrote that fans must use good judgment.

"It is up to the fans to decide whether they are in good health or not and also up to us all to practice safe distancing and proper hygiene," Jason Turner said.

The track was making plans for opening night this week before Cooper issued the guidelines for Phase Two.

The Turners said earlier in the week they had been in contact with Health and Human Services, the Alamance County Sheriff’s Office and the Alamance County Health Department for guidance in hosting a safe gathering. Among the protocols will be questions for fans entering the track about possible contact with anyone exposed to COVID-19 and one-way restroom lines, with drivers and crews limited to essential personnel in designated areas and being asked to wear masks.

"We aren't taking this lightly, and we know what's been going on," Jason Turner said Wednesday before Cooper's announcement. "We've been on the phone with the health department in Alamance County and in Raleigh, and we want to be good stewards in this deal."

Auto racing has returned to the Carolinas, with the NASCAR Cup Series race at Darlington, S.C., on Sunday serving as one of the first major sporting events in the United States to be staged since the pandemic prompted a shutdown March 11-12. Darlington was held without spectators and with drivers and teams subjected to stringent guidelines – no overnight stays, temperature checks for everyone entering the garage, face masks required, duct tape marking walking lines and threats of fines and ejections to anyone not adhering. Around the world, Germany's Bundesliga soccer league also returned last week, although games were played with no spectators present.

The pandemic has claimed 12 lives in Alamance County and caused 236 known cases as of today, according to the state's Health and Human Services. Neighboring Guilford County has reported 50 deaths and 944 cases, and Forsyth County shows seven deaths and 801 cases. North Carolina has accounted for 716 deaths, and more than 93,000 have died in the United States.

“The (NCDHHS) and the Alamance County Health Department have provided precautions for Ace Speedway staff to consider,” Hagood wrote in an email before Wednesday's announcement from Cooper.

Stacie Turpin Saunders, the director of the Alamance County Heath Department, wrote in an email that Ace Speedway has been informed of what needs to happen to open.

Turner said that the state health department isn't requiring masks to be worn but would be offered to drivers and crews.

"It's up to the fans, and if they want to wear them that is fine," Turner said.

Before Cooper's guidelines were tweaked, Jason Turner was told that venues could hold 25 percent of their capacity, which would be around 1,200 or so.

Chris Mackey, the communications director for the N.C. Department of Health and Human Services, did not return a phone message.

Plenty of hand sanitizer will be available, and Turner added that fans will need to cooperate with the guidelines.

Randy Pettitt, the track announcer who also handles those duties at Bowman Gray Stadium in Winston-Salem, said he didn't plan to wear a protective mask as he roams through the infield and the stands with a cordless microphone but would keep his distance from others.

“All the racing folks are glad to get going again,” Pettitt said.

Chris Fleming, a popular driver in Bowman Gray's Modified Division, says it is important to return to some normalcy. Since Bowman Gray has not announced an opening date, Fleming said it’s important to his sponsors to race.

“I don’t live in fear,” Fleming said. “It doesn’t bother me at all. When it comes to the fans if you are sick or feeling bad you don’t need to come out there. It’s about common sense, so I’m not worried about anything happening out there.”

Fleming tested at Ace Speedway on Saturday and liked how the track set up. Other drivers from Bowman Gray who are expected to race at Ace are Burt Myers, Tim Brown, Jason Myers, Chris Williams and Chuck Wall.

“I think a lot of the local fans from Bowman Gray might try and make it over there to Ace,” said Wall, the Bowman Gray champion last year in the Stadium Stock division. “As for the safety, I think folks just need to properly space themselves out and be smart about it. It’s really about common sense. ...

“We need to get the economy moving again,” Wall added. “We want to get back out there and start racing again.”

Jason Turner, a co-owner with father, Robert, of Ace Speedway, listed precautions that will take place.

All systems are a go for Ace Speedway’s opening on Saturday, which includes allowing spectators into the grandstands.

An estimated 4,000 people turned out at Ace Speedway in rural Alamance County on Saturday evening.

ALTAMAHAW – Tim Brown had mixed emotions about his victory at Ace Speedway on Saturday night as an estimated crowd of 4,000 crammed in to watc…

Governor: Race track was 'dangerous and reckless' in Alamance. In Winston-Salem, no timetable yet for the opening of Bowman Gray Stadium season.

Other auto racing tracks in the Triad have opened their doors to fans, but Bowman Gray Stadium has no immediate plans to start its NASCAR-sanc…

As NASCAR continues its race against the elements, it might be facing a showdown with its own fans before long.