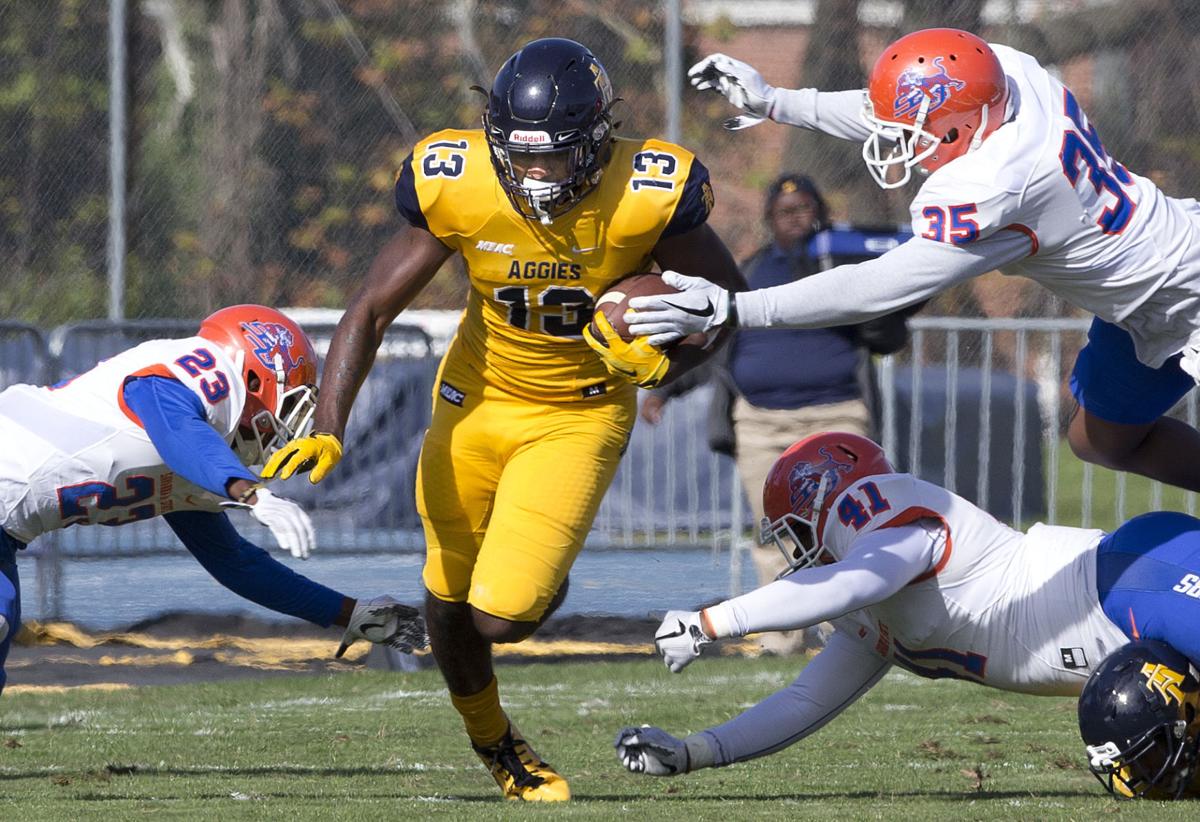 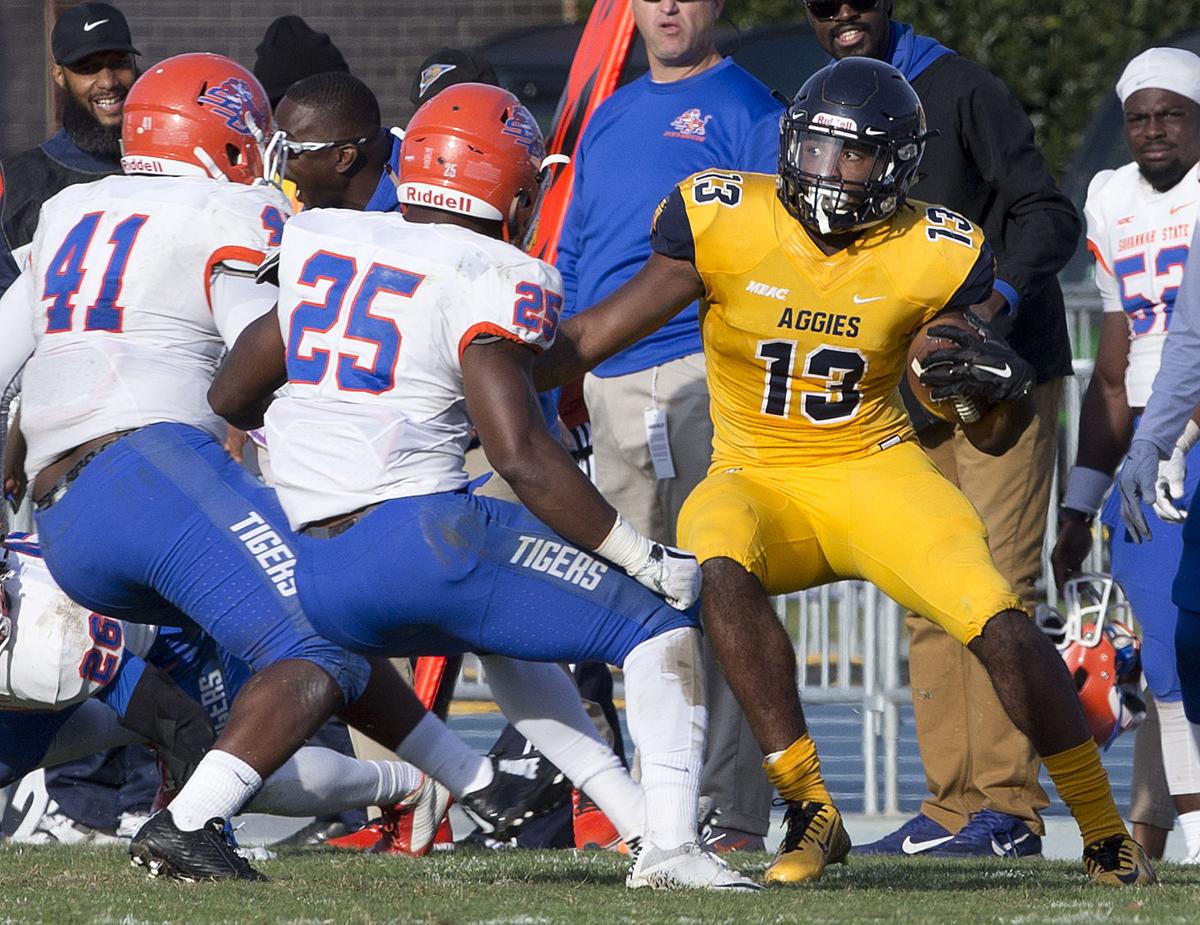 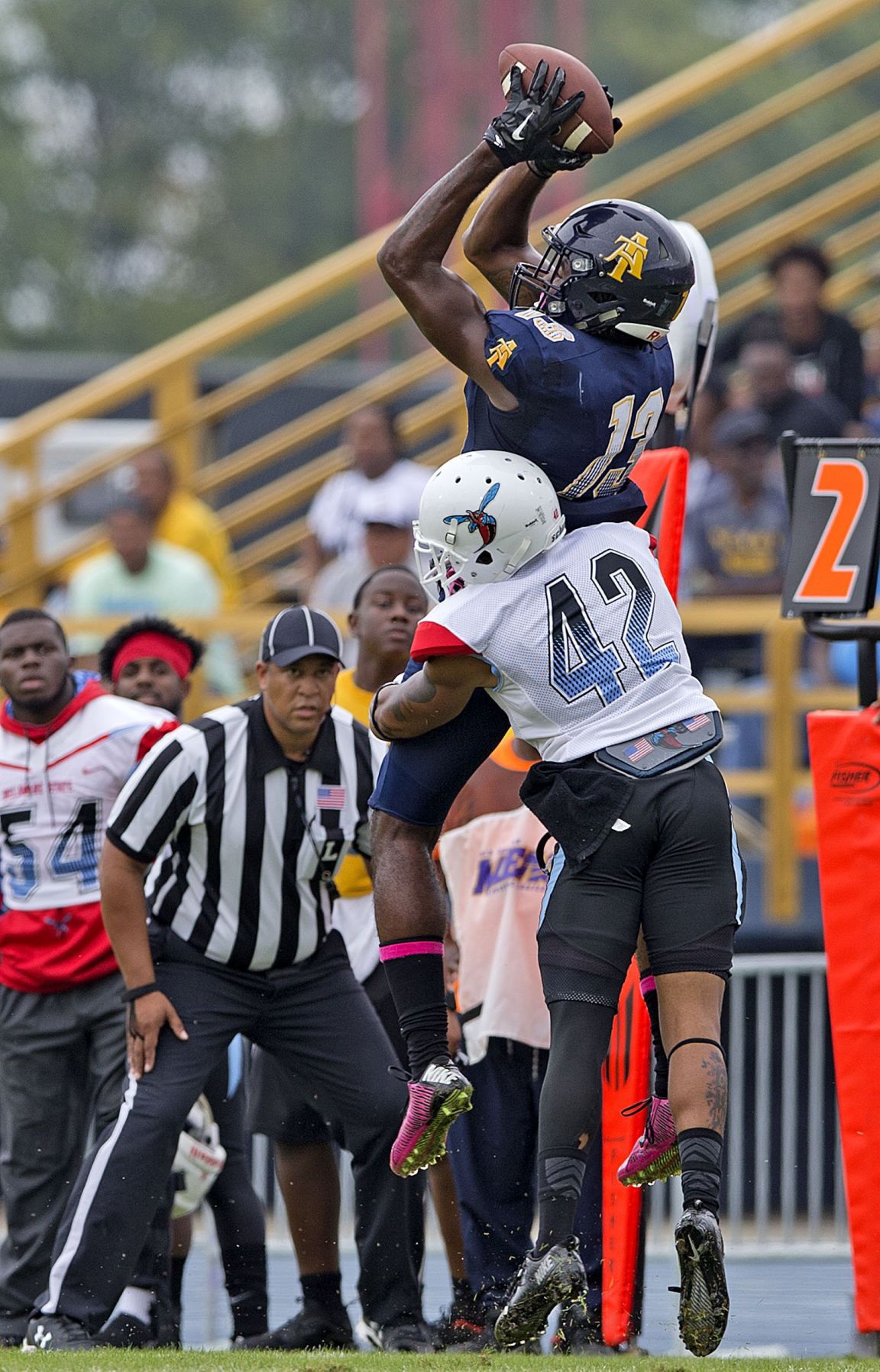 At 6-foot-2 and a muscular 223 pounds, A&T's Elijah Bell can outmuscle and outjump most smaller defensive backs assigned to cover him. 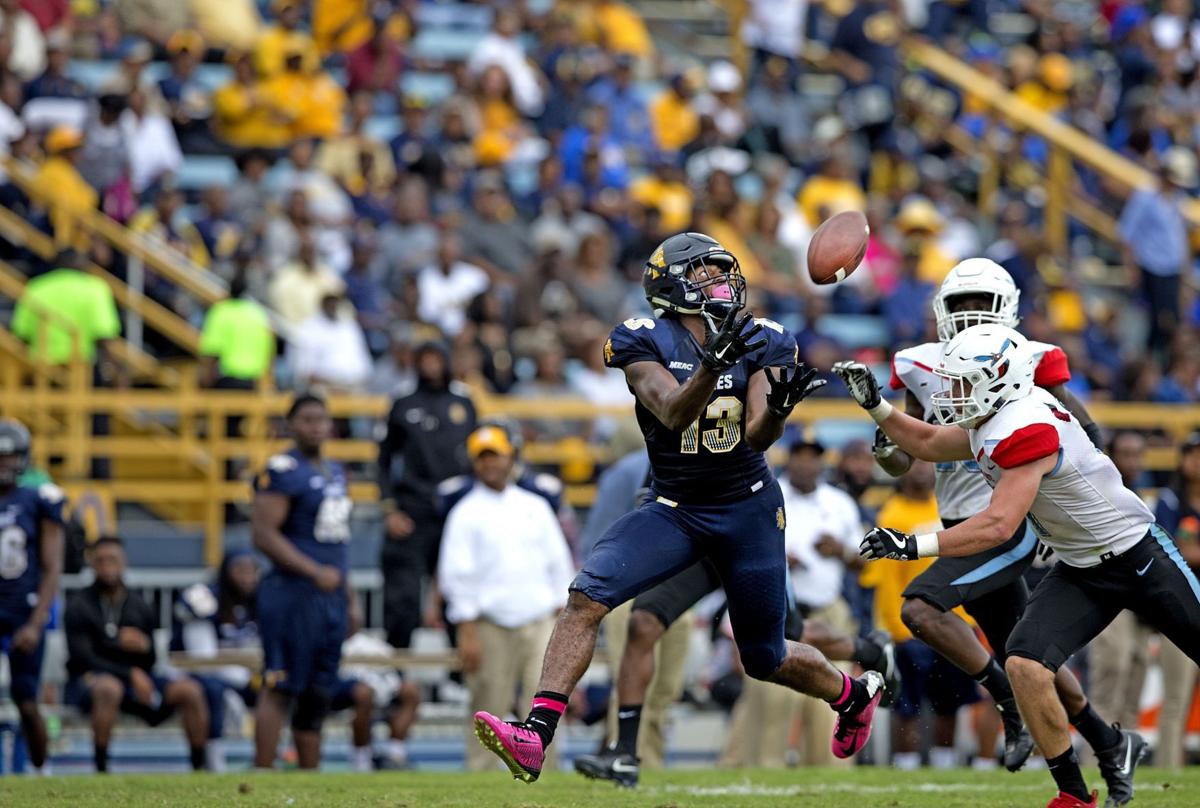 N.C. A&T’s Elijah Bell catches a pass for a touchdown against Delaware State during the Aggies homecoming victory.

GREENSBORO — The best receiver in the MEAC got exactly one Division I football scholarship offer during his senior year of high school in Wheeling, W.Va.

And so Elijah Bell came to N.C. A&T to rewrite the Aggies' record book.

Bell, a muscular 6-foot-2, 223-pound wide receiver, heads into the regular-season finale against N.C. Central with 50 catches for MEAC-highs of 776 yards and 10 touchdowns through 10 games.

The 10 TDs rank seventh in the nation in FCS, and they tie a single-season school record shared by Bell, Denzel Keyes and Craig Thompson.

“If it comes, it comes. If it doesn’t, well, it doesn’t,” Bell says. “It would be really exciting to get that 11th touchdown as a sophomore to break that record. But I still have a lot of time left here to catch passes.”

As good as he is, Bell is still a work in progress at wide receiver. He came to the position late.

Bell grew up playing baseball, then focused on basketball when he got to high school. He played football, too, but as a safety until moving to offense as a senior.

In that lone offensive season at Wheeling Park, Bell won the Randy Moss Award after leading the state with 1,214 receiving yards and 17 TDs.

“I had a lot of D-II offers in my senior season,” Bell says. “I had a big game vs. Morgantown High School, and I thought I would have an offer from West Virginia. But they offered preferred walk-on, so that was off the table.”

A few weeks later, A&T made its offer after hearing about a basketball player in Wheeling who was pretty good at football and going to see Bell play.

“I was getting ready for basketball season,” Bell says. “I remember seeing A&T on TV in the Celebration Bowl, the big game that Tarik (Cohen) had, and it was a nice moment knowing I was going to have a Division I offer. It was the only one I got.”

Bell caught 35 passes for 631 yards and eight touchdowns as a freshman, earning MEAC Rookie of the Year honors as A&T’s No. 2 receiver opposite Keyes.

Now Bell is the No. 1 target in a deep receiving corps.

“If the team needs me to make a play, I’m going to make it,” Bell says. “I get a lot of attention, but it’s not just me. I get excited when the guys around me make plays. I’ve tackled a couple of my receivers in the end zone this year after they’ve got their first touchdown.”

A big, strong, physical wide receiver, Bell has started to draw double coverage as the season has progressed. So he works to hone his game, to become a better route-runner and not simply outmuscle smaller cornerbacks.

“I still need to work on getting a little bit faster, moving side-to-side better,” he says. “Coming out of my breaks, I could be better. I feel like that’s my biggest downfall right now.”

In the meantime, the statistics say he’s already the best wide receiver in the MEAC.

Countries that have never won an Olympic medal

Five things to know about A&T vs. N.C. Central

The unbeaten Aggies will try to wrap up a perfect regular season and win the MEAC title outright with a victory over their biggest rival.

At 6-foot-2 and a muscular 223 pounds, A&T's Elijah Bell can outmuscle and outjump most smaller defensive backs assigned to cover him.

N.C. A&T’s Elijah Bell catches a pass for a touchdown against Delaware State during the Aggies homecoming victory.