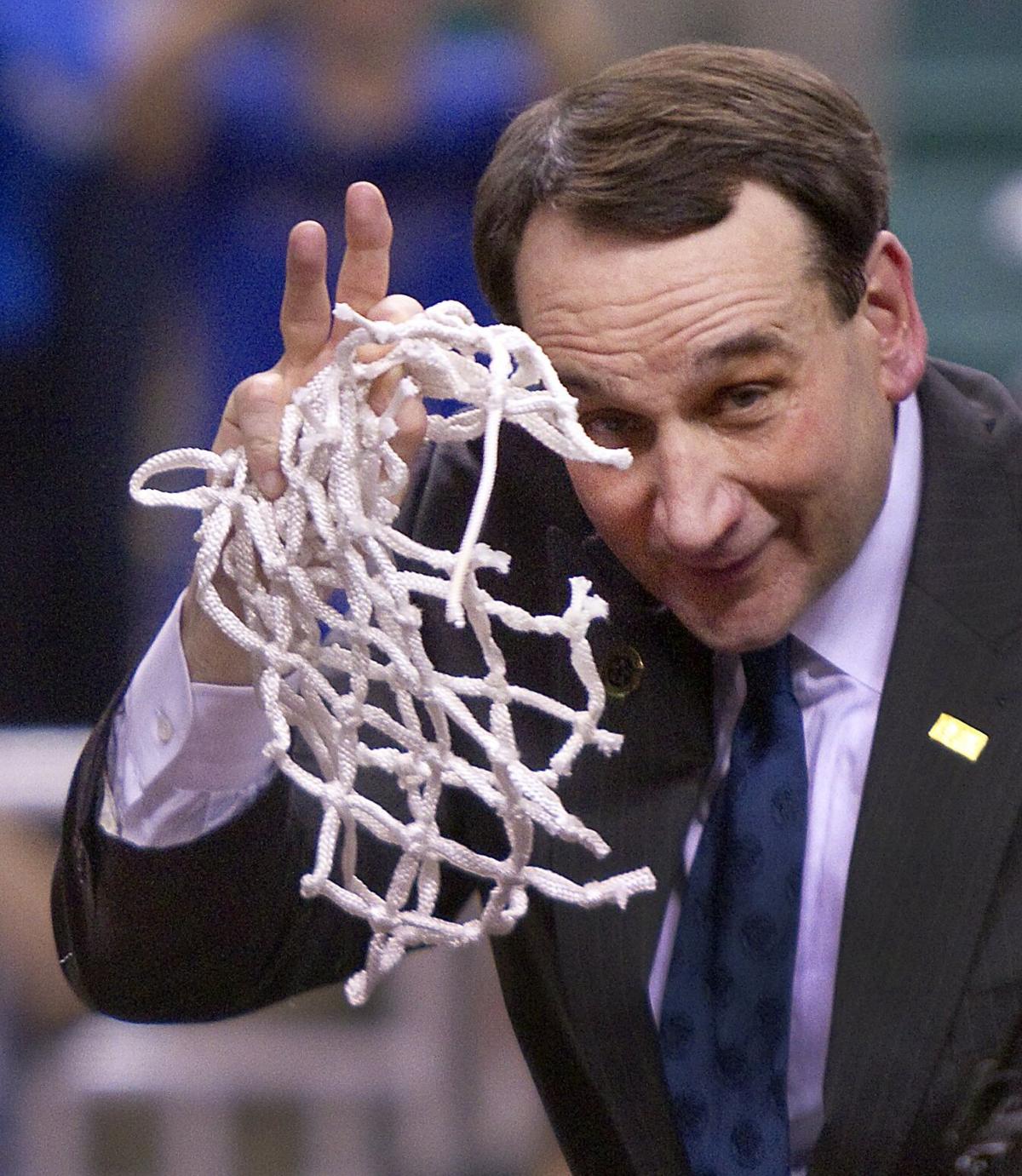 Duke coach Mike Krzyzewski waves to Blue Devils fans after a victory over North Carolina in the ACC Tournament championship at the Greensboro Coliseum in March 2011. Krzyzewski, the winningest coach in Division I men’s basketball history, will retire after the upcoming season. 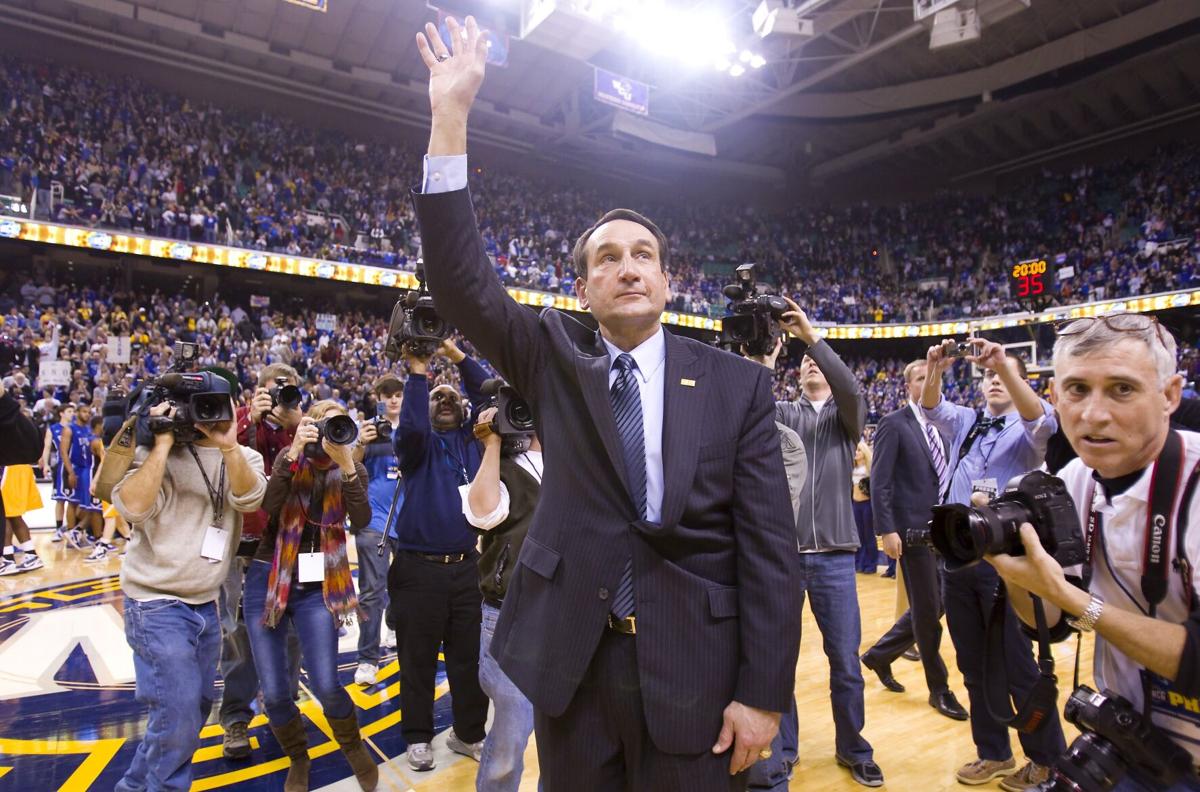 Duke’s Mike Krzyzewski after surpassing North Carolina’s Dean Smith on the all-time NCAA Division I wins list with No. 880, earned over UNCG at the Greensboro Coliseum on Dec. 29, 2010.

Mike Krzyzewski was in the airport in Raleigh in 1980, about to board a plane to go back to West Point.

He’d been in Durham off and on for a few days, interviewing for the head basketball coaching job at Duke. After three interviews and an angry wife, the Army coach was minutes away from boarding when a voice crackled over the PA system.

Krzyzewski paused and looked around and figured it was just one more person who couldn’t pronounce someone’s name. He was used to it. Then it hit him.

That was 41 years ago, and somehow it seems like yesterday. A year from now, it will feel like forever.

Krzyzewski, the winningest coach in Division I men’s basketball history, will retire after next season, walking away from a job he almost didn’t get. His retirement will end an era of basketball in this state unlike anything we’ve ever seen and are to ever see again.

Taking over a program in flux after the sudden departure of Bill Foster, Krzyzewski lasted four decades, winning five national titles, 1,097 games in Durham and establishing Duke as a national program.

You could argue that Duke has become the only national program in college basketball.

That’s in part because of his years coaching the U.S. Olympic teams, which won gold medals in 2008, 2012 and 2016. But it’s also because of the omnipresence of Duke in the NCAA Tournament, where he has won a record 97 games in his career, taking his teams to 12 Final Fours.

Most of us have seen him only on television, ranting and raving at referees, scowling and screaming at his players, imposing his will on games, his teams, officials and the NCAA itself.

The few of us who saw him behind the curtains know him to be funny, engaging, wise and entertaining. Yes, he’s been known to bark at college reporters for asking inane questions now and then. And yes, he’s almost impossible to get on the phone when you need him, but Krzyzewski is also the guy who talks baseball before his press conferences, reaches out to writers and media members who’ve had tragedies in their lives, writing personal notes to those in pain, even texting sportswriters who’ve been laid off or retired after years of covering him.

Those who know him best know him to be a genuine person who cares far more about his family and close friends than winning and losing games.

He will leave a void impossible to fill when he retires after the 2021-22 basketball season, and it will be for a lot more than basketball.

Which makes it all the more poignant that in 1980, just before getting on that airplane and heading back to West Point, that an announcement came over the PA system by someone who couldn’t pronounce his name.

The short version of the story is that Duke athletics director Tom Butters was on the phone and wanted to tell Steve Vacendak, a former Duke player and Krzyzewski’s escort to the airport that day, “Don’t let him get on that plane.”

After three interviews, one with an irritated Mickie alongside, and a long ride to RDU, it was that phone call that changed basketball history.

“When I finally called my wife, she said, ‘Where are you’?” Krzyzewski said, recounting the story years later. “They called me back.”

“They called you back? For a fourth interview?” Mickie was livid, and she let her husband know it.

“They offered me the job,” he told her.

“How much are you going to make?” she asked, her blood cooling somewhat.

“I’m in it for the relationships,” he said after losing an NCAA Tournament game several years ago.

And yes, even that made people upset.

We get to watch him for one more year, and then he’ll be gone and basketball in this state will never be the same.

Should there be concern around the Yankees?

Should there be concern around the Yankees?

Khadim Sy is a graduate transfer from Ole Miss

Ben Bolch: Mike Krzyzewski is the greatest? Only since John Wooden retired.

There’s an obvious four-word rebuttal for anyone who says that Duke’s Mike Krzyzewski, as great as he’s been, is the greatest college basketball coach of all time.

There was a time not so long ago, 2012 to be exact, when the big news in college football was conference commissioners simply using the word playoff when talking about the future of the sports' postseason format.

The East Preliminary is in Jacksonville, Fla.

ORLANDO, Fla. — The College Football Playoff could possibly consider expansion in a series of meetings over the next several weeks with some favoring a 12-team model according to several reports. The management committee, which is comprised of the 10 conference commissioners and Notre Dame athletics director Jack Swarbrick, is expected to hear back from a working group during a series of ...

The long-time rivals will play each other this fall in Greensboro.

Luke DeCock: As Coach K retires, basketball will be left to reckon with the void he’ll leave behind

There is a great disturbance in the basketball force.

RALEIGH — Five months ago, with COVID-19 protocols dictating that Mike Krzyzewski quarantine in one part of his Durham home while his wife did…

Duke coach Mike Krzyzewski waves to Blue Devils fans after a victory over North Carolina in the ACC Tournament championship at the Greensboro Coliseum in March 2011. Krzyzewski, the winningest coach in Division I men’s basketball history, will retire after the upcoming season.

Duke’s Mike Krzyzewski after surpassing North Carolina’s Dean Smith on the all-time NCAA Division I wins list with No. 880, earned over UNCG at the Greensboro Coliseum on Dec. 29, 2010.