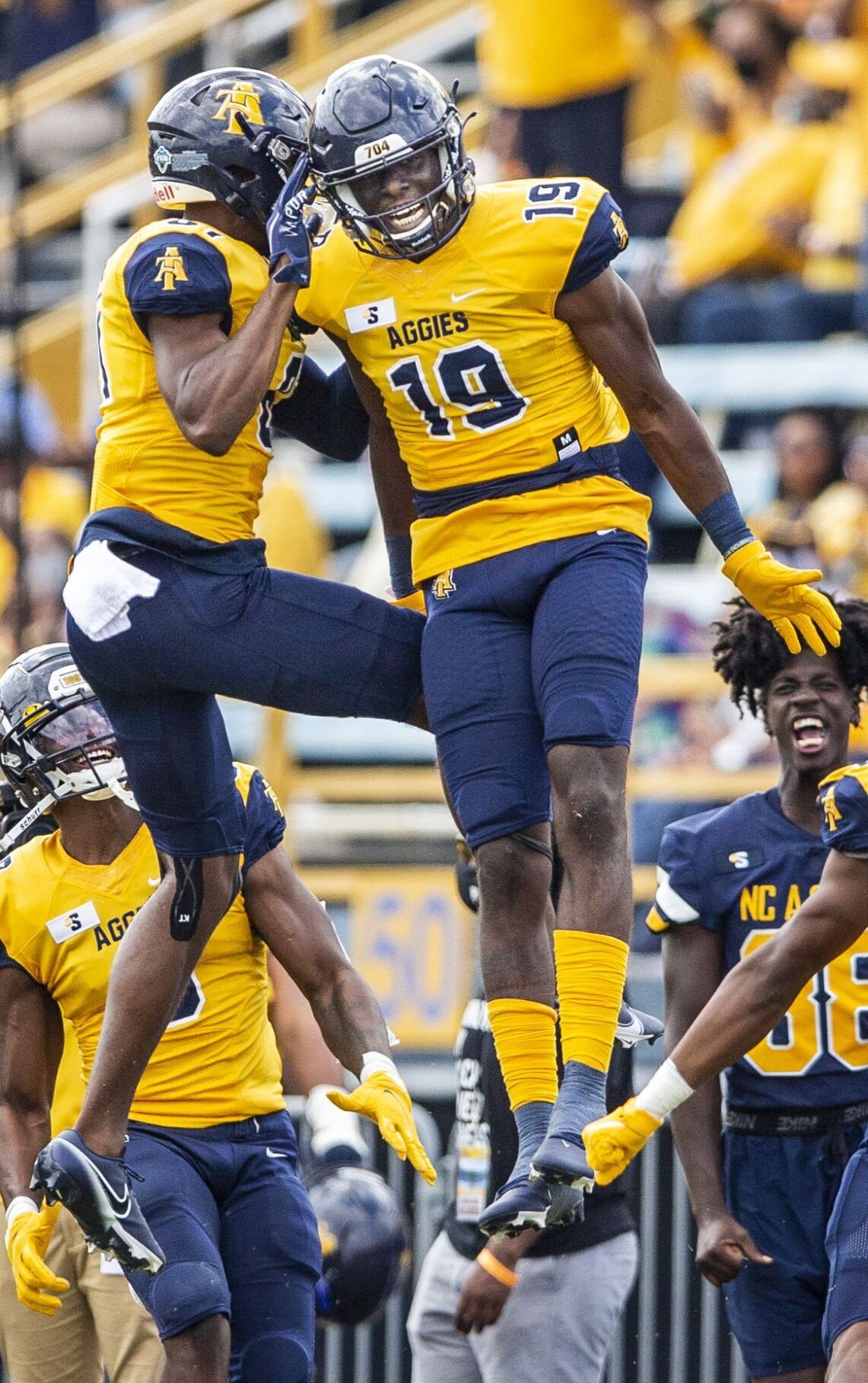 North Carolina A&T’s Ron Hunt and Zachary “Zach” Leslie celebrate Leslie’s touchdown with just seconds to go in the first half of Saturday’s game against Robert Morris at Truist Stadium in Greensboro. 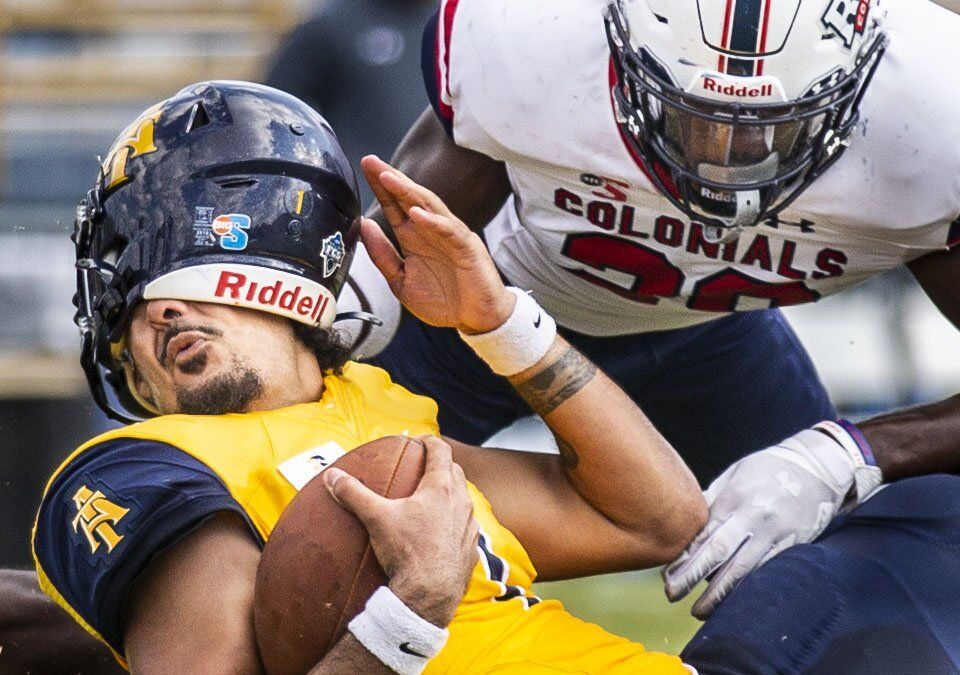 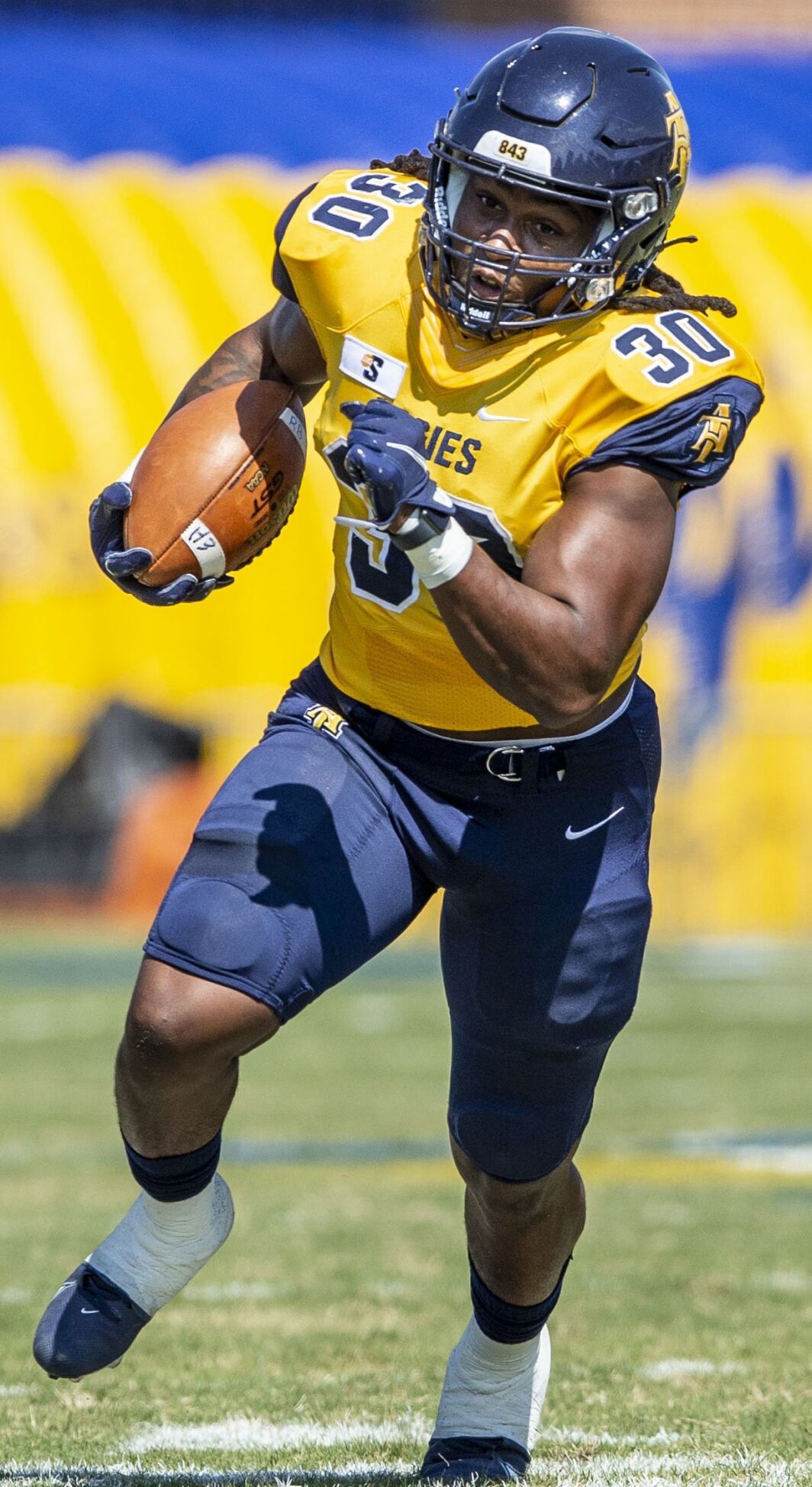 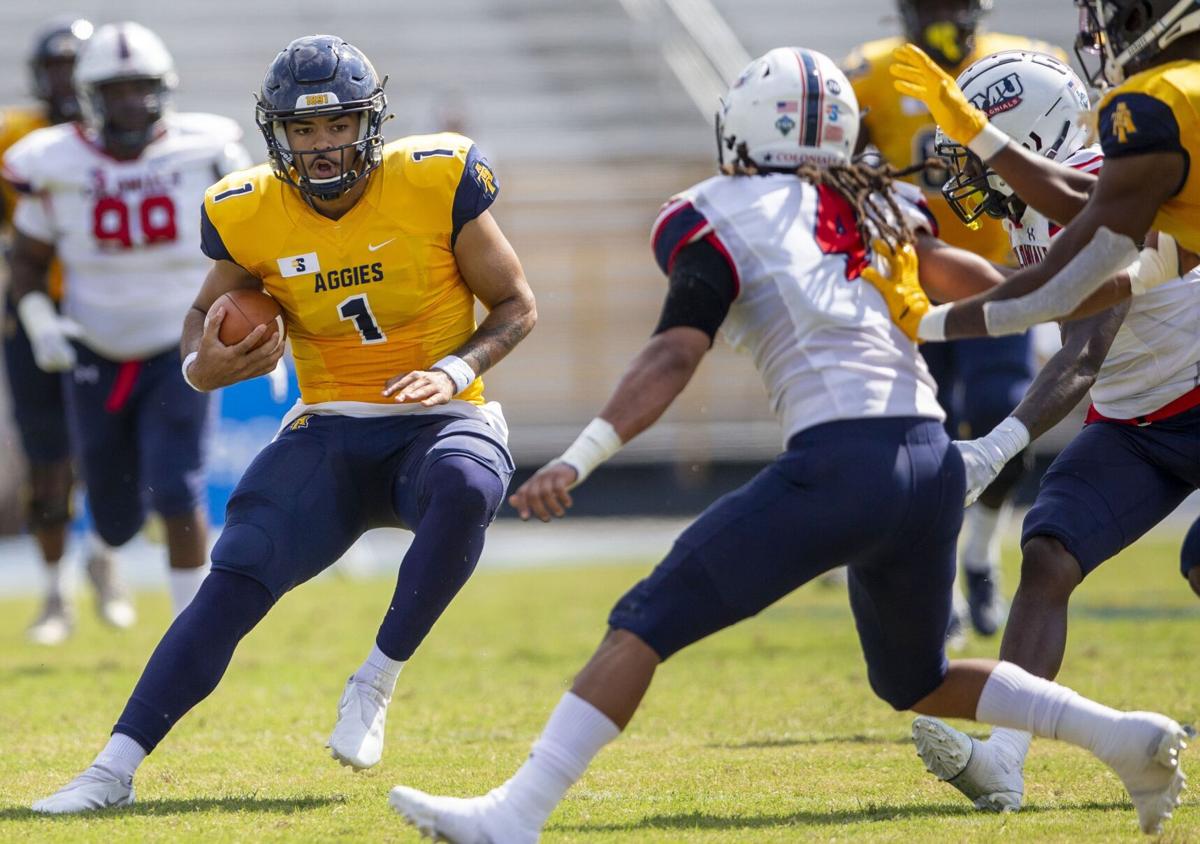 North Carolina A&T's Jalen Fowler runs for a gain during against Robert Morris.

The N.C. A&T Aggies welcomed themselves to their new conference with a complete-game effort that had Coach Sam Washington smiling afterward.

The Aggies won their first game as a member of the Big South Conference, 41-14 over Robert Morris at Truist Stadium on Saturday afternoon. The Colonials were also making their league debut, but had trouble keeping up with the Aggies’ size, speed and strength.

“That’s a coach’s dream,” Washington said of the balance that quarterback Jalen Fowler displayed, moving the Aggies up and down the field seemingly at will. “With that balance you can manage the game better, and when you know you are running the football effectively, it’s just much easier.”

Senior Jah-Maine Martin, who has been battling an ankle injury all season, helped boost the ground game. On Saturday afternoon there was no sign of Martin limping; he rushed for 105 yards on 14 carries and scored two touchdowns.

When Martin scored his second touchdown to give the Aggies a commanding fourth-quarter lead, public address announcer Joseph Level summed it up best: “He is back.”

Fowler, who was 15 of 20 passing for 205 yards and had two touchdown passes, said he was excited to see Martin return to form.

“He did well,” Fowler said. “We preach running the ball here, and that’s something that we’ve got to do and when we do that well, it makes it easier to open stuff up.”

What could be best described as the turning point came at the end of the first half after Robert Morris cut A&T’s lead to 13-7. A 35-yard kickoff return by Taymon Cooke gave the Aggies great field position. Two plays later, Fowler hit Zach Leslie with a 22-yard touchdown pass as Leslie out-jumped a defender in the back of the end zone.

That touchdown gave the Aggies a 20-7 halftime lead.

“That was a big touchdown,” Washington said. “That gave us the momentum at halftime and if we don’t score there, then they have the momentum.”

Washington said on that play Fowler’s instructions were to throw it as high as he could in the end zone and Leslie, who has battled back from a completely torn Achilles tendon, made the catch of the game.

Fowler said he thinks Leslie can jump even higher if needed.

The offense was so dominant that Michael Rivers never punted. His only action was holding for Andrew Brown’s two field goals and his five point-after attempts.

Defensively, the Aggies struggled on third down in the first half, something Washington said they had to adjust to in the second half.

Defensive back Najee Reams, who had eight tackles, agreed with Washington that this was the Aggies’ most complete game of the season.

“It’s really about getting back to our base,” Reams said of shutting down the Colonials in the second half. “We had to be disciplined with our eyes, and when we know where to go, and we execute like that, we stop everything.”

Fowler said the first conference win in the Big South didn’t feel any different than when they were the dominant program in the MEAC. Trying to conquer a new conference will have its road blocks, but so far, so good.

“It was just football,” Fowler said. “It didn’t feel any differently, it just felt like any other week. I’m proud to be a part of history, and it was the first win in the Big South but it was just another game for us.”

Players and volunteers get ready for Arab Cup

Players and volunteers get ready for Arab Cup

Tiger Woods Will Not Return To Golf Full-Time

Tiger Woods Will Not Return To Golf Full-Time

North Carolina A&T’s Ron Hunt and Zachary “Zach” Leslie celebrate Leslie’s touchdown with just seconds to go in the first half of Saturday’s game against Robert Morris at Truist Stadium in Greensboro.

North Carolina A&T's Jalen Fowler runs for a gain during against Robert Morris.