Wake Forest notebook: Clawson quelled rumors to his team on the eve of Boston College game
0 Comments
Share this
{{featured_button_text}}
1 of 2 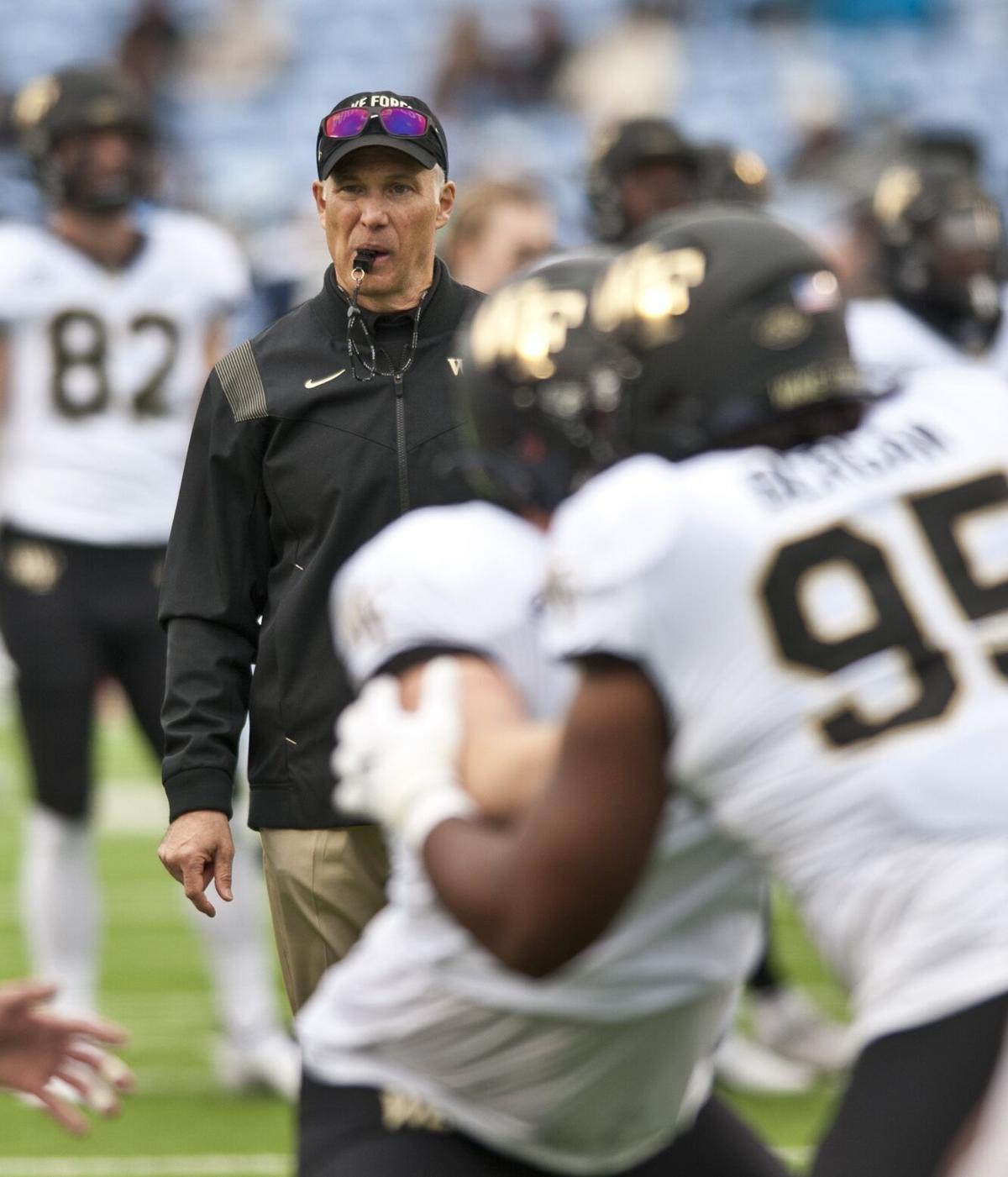 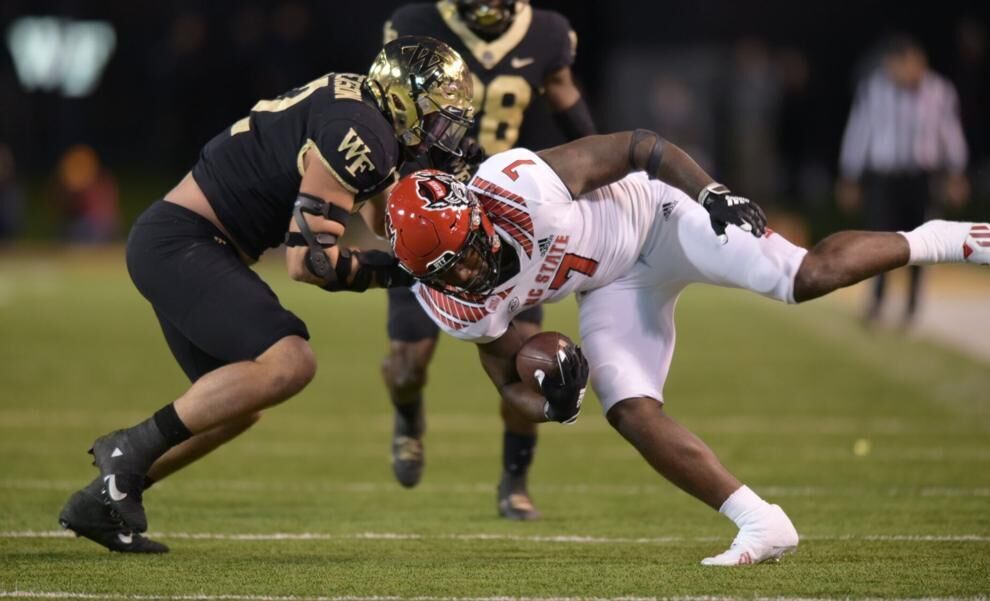 Luke Masterson (left) has seen his NFL stock rise thanks to a position switch and coming back for a sixth season at Wake Forest.

The contract extension that Coach Dave Clawson received last week is something that had been in the works, but wasn’t a pressing matter.

It became a pressing matter when Clawson heard through the recruiting grapevine that other coaches were using it against him.

“It was very matter of fact,” Clawson said of telling his team in a meeting last Friday about the extension in which terms of the contract were not released. “I never want this to be about me, so it wasn’t about me finding a video of Leonardo DiCaprio (The Wolf of Wall Street) and putting my face on it saying that I’m staying.... I had planned on signing an extension when the season was over because of how well our players have been playing but there were some rumors that I might be going somewhere else.”

Clawson said he didn’t want to make the contract talk of the extension a distraction during the season.

“There were some rumors that I might be going here or there and it started to impact recruiting and other coaches were starting to use that against us,” Clawson said. “Some coaches on our staff had shared with me that our players had asked them about it, and I just thought the distraction of the players thinking I might be leaving outweighed the distraction of me signing the extension (during the season).”

Wake Forest was given two different ticket blocks to sell for Saturday’s game and nearly 9,000 were sold by Wednesday.

Clawson he expects more than 25,000 Wake Forest fans at the game on Saturday.

“We had more than 2,000 students buy tickets and will likely have more than 3,000 students at the game,” Clawson said on Tuesday. “We do have a small enrollment, we don’t have 60,000 students, but the passion of our fan base and how much they care about our program is certainly equal to a lot of other schools.”

One of the tweaks the Demon Deacons made on defense was moving sixth-year senior Luke Masterson from safety to outside linebacker. While Masterson leads the Deacons in tackles with 72, he was somehow left off the three All-ACC teams that were announced on Tuesday, but he was named honorable mention.

Masterson was one of nine players who came back for an extra year because of COVID-19 and he was one of seven who actually played this season. One NFL draft website had Masterson ranked as the eighth best outside linebacker eligible for April’s draft.

“He’s gone from kind of an oversized safety to a 235-pound linebacker that can run, hit, tackle and blitz,” Clawson said. “He played really well against (Boston College) and was all over the field. He’s a very valuable special team’s guy who at the next level could start on all four units. He’s such a good leader and such a good person and we have a lot of guys like that and I’m proud to be their coach.”

For the first time, Wake Forest had 15 players selected on the All-ACC teams as well as honorable mentions, which was a school record.

Since losing 38-34 at home to Miami on Oct. 30, the Pittsburgh Panthers head into the ACC championship game on a four-game win streak. The Panthers have beaten Duke, North Carolina, Virginia and Syracuse and are in the championship game for the second time in the past four seasons.

Quarterback Kenny Pickett, who was named the ACC Player of the Year on Wednesday, is a finalist for the Davey O’Brien National Quarterback Award, Johnny Unitas Golden Arm Award, Maxwell Award and Senior CLASS Award. He’s thrown 40 touchdown passes this season, one shy of Clemson’s Deshaun Watson, who had 41 in 15 games in 2016 to set he ACC record.

Pickett has 79 career touchdown passes, one shy of Dan Marino, an NFL Hall of Famer and former Pitt quarterback.

Most of Pickett’s touchdown throws have gone to wide receiver Jordan Addison, who leads the country with 17 touchdown catches.

Clawson grew up rooting for Pittsburgh

Even though Clawson grew up in Western New York, one of the first teams he remembers rooting for was the Pitt. Clawson’s father, who lives in Charlotte, is from Johnstown, Pa. and is a graduate of Pitt.

“It’s a thrill for me, career-wise, to be able to coach against a team I grew up rooting for as a young kid,” Clawson said.

Clawson said his father took him to Pitt Panther football games as well as Steelers games and Pirates baseball games.

One of the constants this season for the Demon Deacons as one of the highest scoring teams in the country is their offensive line.

Michael Jurgens says he’s excited about the challenge of facing the Panthers on Saturday.

“You hear a lot about Pitt and how they like to bring a lot of pressure,” Jurgens said. “I think on those downs they bring pressure we’ll have to give Sam (Hartman) the faith that he can step up and hit those over-the-top shots.”

The Demon Deacons are the highest-scoring team in school history, something that Jurgens says is great to hear.

“I’m just really proud of the way this team has handled the 1-0 mantra for each week,” he said. “I think that’s still the case this week and Coach Clawson says it all the time. While there’s some pressure in the moment with the ACC championship but it’s all about the next game.”

Opinion: Sean Payton's last season with the Saints was a success

24 years later, Jamaica's four-man bobsleigh team is back at the Winter Olympics

24 years later, Jamaica's four-man bobsleigh team is back at the Winter Olympics

Luke Masterson (left) has seen his NFL stock rise thanks to a position switch and coming back for a sixth season at Wake Forest.