GREENSBORO — The 99 names on the bronze plaque inside Grimsley High School’s Sigmund Selig Pearl Field House are a part of history, but the memorial room that honored them had all but been forgotten.

When Ethan Albright was a Whirlies athlete from 1985-1989, “It was a storage room,” says Grimsley’s athletics director. “I didn’t know about all the history in there when I was here. You heard it called a ‘memorial room,’ but when you looked in there it was boxes of stuff and football trophies in the window cabinets.”

The names on that plaque will come back to life Friday night just as the memorial room has been restored in recent years. Players on Grimsley’s football team will wear special blue Under Armour jerseys with red-and-white trim that bear the names of the 99 alumni of what was then Greensboro Senior High School who gave their lives in service to their country during World War II.

The Roll of Honor World War II Memorial Game at Jamieson Stadium will pit the Whirlies against Southeast Guilford in a Metro 4-A Conference matchup that kicks off at 7:30. But the main event in many ways will begin at about 6:45. That’s when Michael Courts, Grimsley’s public-address announcer and a history teacher at the high school, will call the names of the 97 men and two women who are immortalized on the Roll of Honor inside the field house.

Who: Southeast Guilford at Grimsley

Admission: $8 with digital fees, online only.

Online jersey auction: Bidding starts at $100, and all 99 jerseys will be up for auction.

Courts, who has been studying the history of the deceased alumni with his students, will call each name and tell fans which battle took the life of each service member and how old they were when they were killed.

The jerseys will be auctioned online after the game, with the proceeds used to do further renovations to the memorial room.

The player who wears No. 1 for the Whirlies, linebacker Khalil Stimpson, will have “Albright” on the back of his jersey to represent John M. Albright. That’s the first name on the Roll of Honor, and it also happens to be Ethan Albright’s cousin.

Ethan’s youngest son, Nolan, also plays for Grimsley. He will don his usual No. 9 jersey, but with the name “Bendigo” on the back for Elmer Jack Bendigo.

Darryl Brown, Grimsley’s head football coach, has had his players walk out onto the field for home games through the memorial room since it was restored.

“We wanted to honor them for what they’ve done and the sacrifices they made just for us to be where we are right now,” Brown says. “Sometimes that’s forgotten about.”

Nolan Albright and his older brother, Lawson, now a freshman football player at Northwestern University, are part of a multi-generational Grimsley family. Still, they didn’t know much about the memorial room.

“I didn’t know a ton about it," says Nolan, a junior tight end and defensive end, “but I’ve learned the history and the importance of it.”

The octagonal wood-paneled room at the front of the 71-year-old building where Grimsley’s football team dresses for practices and games contains display cases with photos and mementoes that tell the stories of the alumni honored there. Its centerpieces are that bronze Honor Roll plaque bearing the names of all 99 who did not come home and a photo of Sigmund Selig Pearl, for whom the building is named.

When Ethan Albright took over as AD at his alma mater in March 2019, he didn’t know the memorial room would become a focal point for him. He did know that “the fun projects for me are the history stuff, honoring past accomplishments.”

Albright’s mentor, Grimsley coaching legend Bob Sawyer, told him about the 99 maple trees that were planted on campus to honor each of the Whirlies who died in World War II. But many of those trees were gone, and replanting them would have caused issues with existing structures and landscaping, so Sawyer connected Albright with Harry Thetford, an historian and the author of “Remembered,” a book about the 99 Grimsley alumni. “He’s fantastic,” Albright says. “And it turned into this.”

“It needs to be a room that befits the sacrifice they made,” Albright says.

With the help of the Grimsley community, the memorial room is becoming just that.

“I started letting people know about the room and all of a sudden we had flags that represented all the branches of the military, without a big to-do,” Albright says. “Some service groups came in and got the Murphy Oil Soap out and cleaned the walls up. Sweat equity went into the room.”

Thetford played a huge role in the historical research that went into adding to the memorial room, which will be open to the public Friday night after the game, and Torren Gatson, an assistant professor at UNCG specializing in public history, and his graduate students have adopted the room as part of their work.

The reaction in the community to what’s already been done has been “just appreciation,” Albright says. “Everybody connects with the sacrifice that generation made for our country. Nobody wants to see that forgotten. It’s deep Grimsley history.”

Nolan Albright feels the history now whenever he comes through the memorial room on Friday nights.

“You get to know what high schoolers went through back then and get to see how much better things are now because of them,” he says. “It makes you appreciate the game when you walk through there.”

The next time the Whirlies walk through the Sigmund Selig Pearl Field House’s memorial room they will be wearing jerseys bearing the 99 names honored there.

Jackson Henry, a freshman kicker on the Grimsley junior varsity, knows about military service. His father, Jacob, is a captain and a chaplain in the U.S. Army who recently did a tour in Afghanistan.

Henry doesn’t know what jersey he’ll be wearing Friday night, but he knows what each of those names means.

“I walked in there to get waters for the team and was like, whoa!” he says. “It was cool to see that guys who went to our school had an impact on the country.”

Seeing “Albright” on one of his teammates’ jerseys and on that Honor Roll plaque makes the sacrifice real for Nolan Albright.

“It hits different,” he says. “It shows that my family was in that war. Someone in my family went to Grimsley, left Grimsley to fight in the war and came back in a box.”

Ethan Albright’s son understands what those 99 names mean, and he hopes the rest of the Whirlies do, too.

“We’re trying to teach that other people’s sacrifice has allowed us to come out here and play a game,” the Grimsley AD says. “The people in that room were 17, 18 and died at Iwo Jima and Normandy. The sacrifice that they made … if we can’t get jacked up to come play a football game, we’re missing something.”

Alumni of what is now Grimsley High School who gave their lives in World War II and the jersey number they will be represented by in Friday night's football game against Southeast Guilford:

2021 Heisman Trophy Market: Where is the value?

The drip-drip of the hundreds of thousands of Washington Football Team emails into the public eye continued Tuesday night.

Mike Bianchi: NFL should have fired Jon Gruden months ago when emails were discovered

First things first: Hopefully, Urban Meyer has sent Jon Gruden a nice fruit basket and a giant thank-you card for knocking Meyer off the front page and into a secondary spot within the coaches-acting-like-idiots subsection of the 24-hour news cycle.

Dan Wiederer: ‘All my (bleeping) life! I own you!’ With a win-sealing touchdown run — and one harsh insult — Aaron Rodgers adds to the Chicago Bears’ misery again

Maybe the fan was a figment of his imagination.

Thanks to a trove of Jon Gruden’s offensive e-mails, the public got a look inside one of the NFL’s inner circles. And what was seen isn’t pretty.

Every NFL fan knows in times of trouble there is a word the league turns to get itself out of a jam — "distraction."

Mike Bianchi: Urban Meyer should be fired by Jaguars for being an incompetent embarrassment

Gruden gone, and it couldn't have come fast enough

Jon Gruden might still be coaching had he merely been exposed as a remorseful racist. 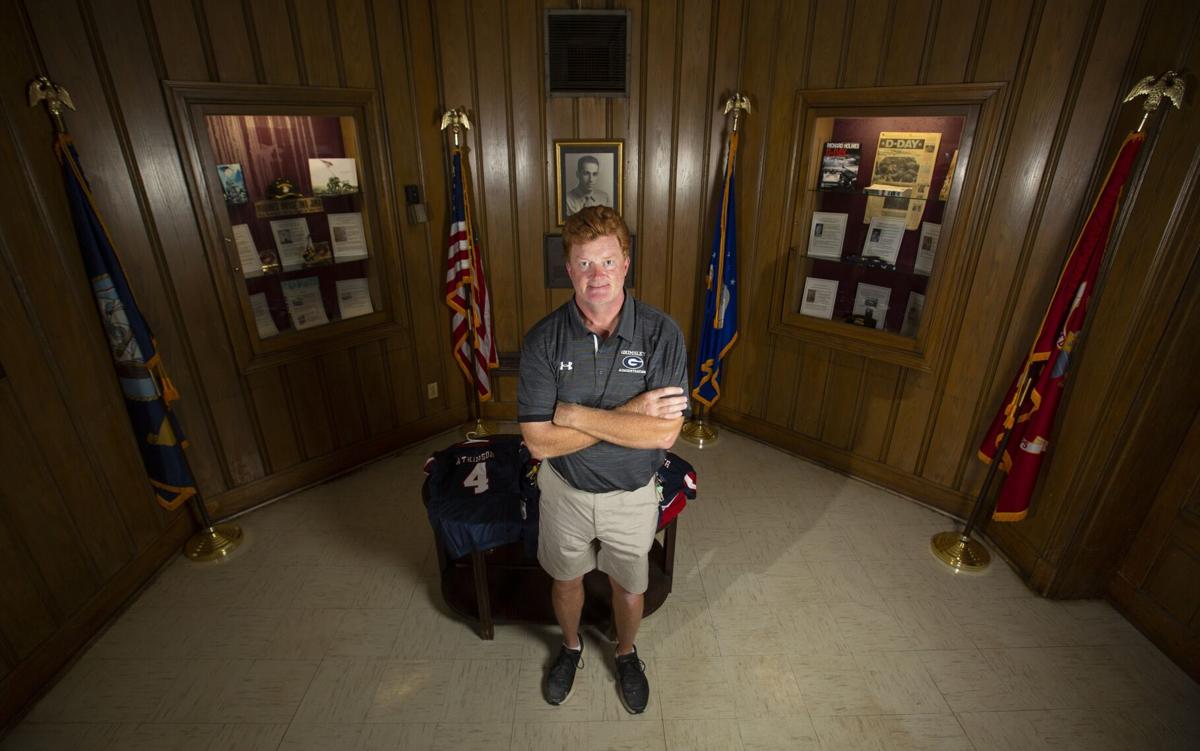 Grimsley athletics director Ethan Albright stands inside the memorial room of the Sigmund Selig Pearl Field House at Grimsley High School. Grimsley will have a military appreciation night for Friday's football game against Southeast Guilford at Jamieson Stadium. The memorial room of the field house, which opened in 1950, was dedicated to the 99 Greensboro Senior High School alumni (97 men, two women) who died in World War II. 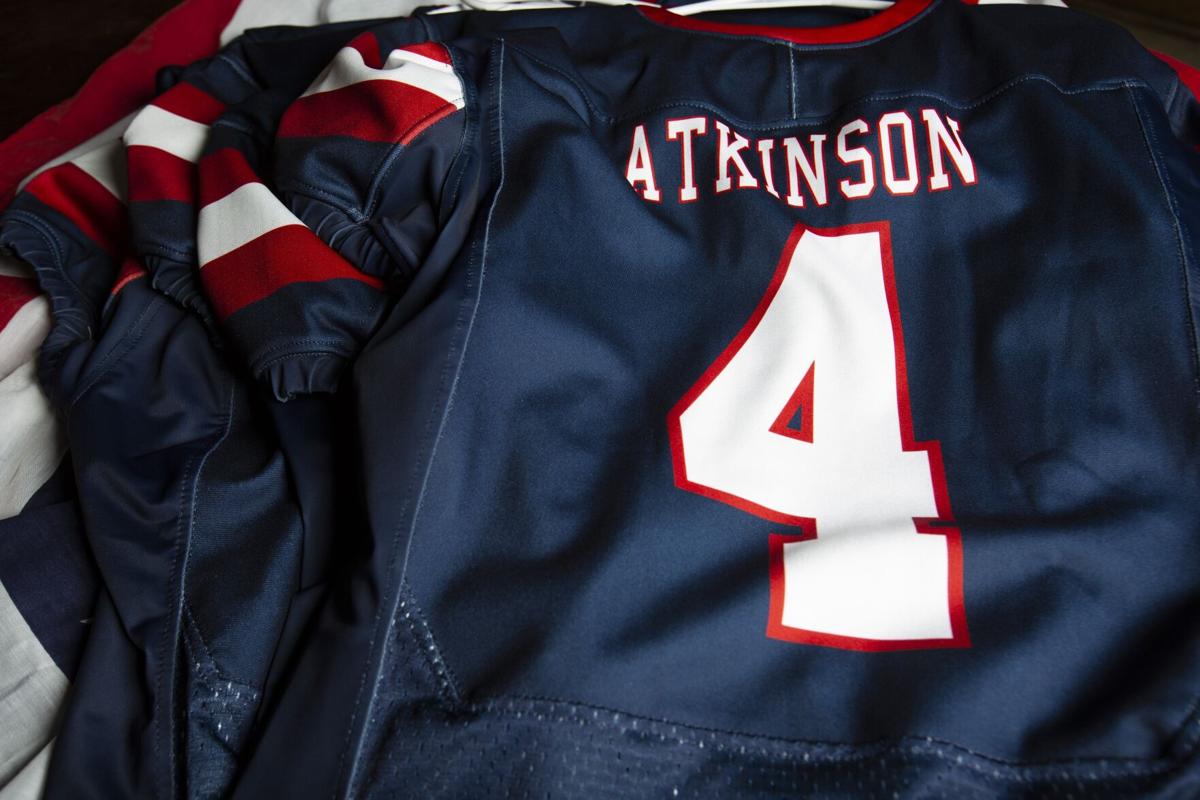 Grimsley will wear special jerseys for Friday night's football game against Southeast Guilford honoring the 99 Greensboro Senior High School alumni who died in World War II. Each of the 99 jerseys the Whirlies will wear bears the last name of one of those who gave their life for their country. The jerseys will be auctioned online after the game. 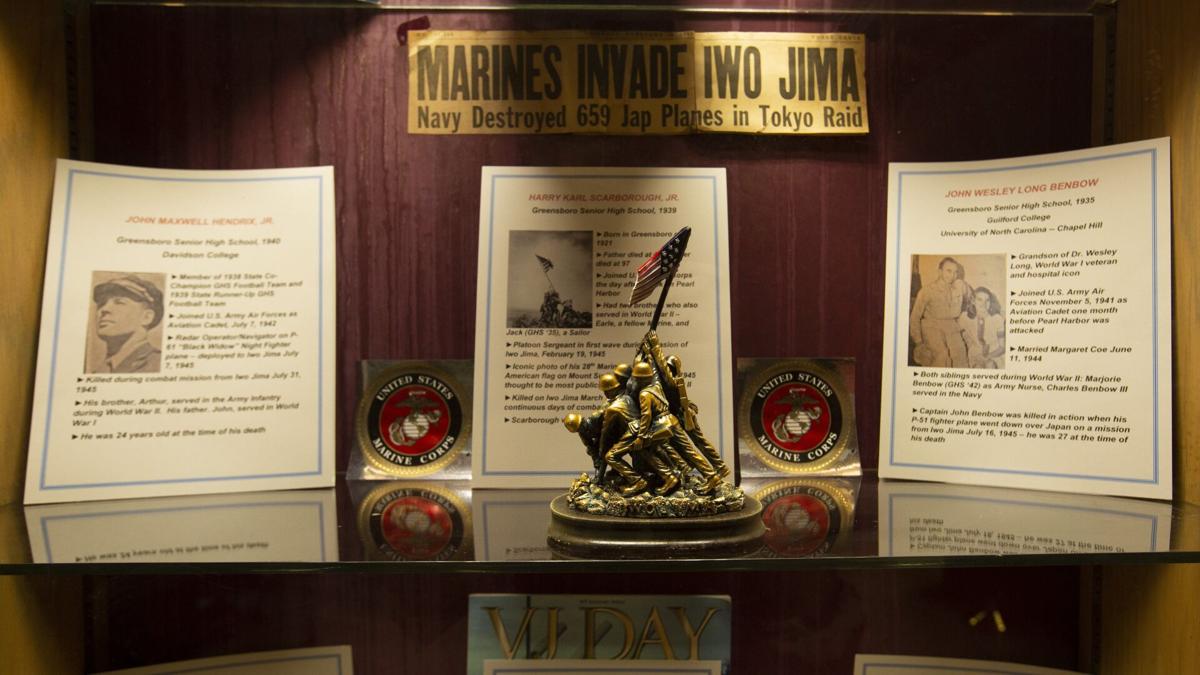 The memorial room in the Sigmund Selig Pearl Field House at Grimsley includes a display honoring Greensboro Senior High School alumni who lost their lives in the battle of Iwo Jima. 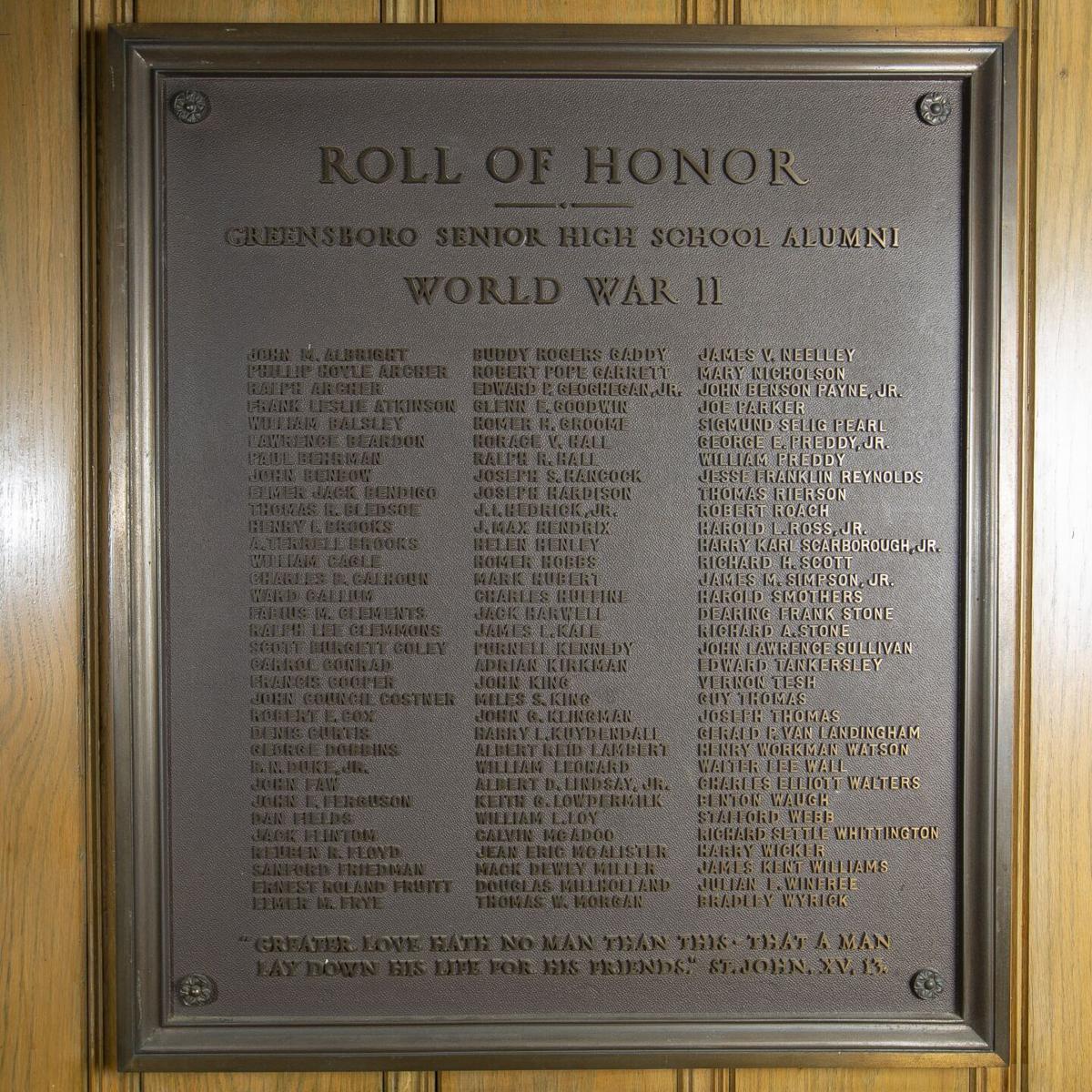 The Roll of Honor listing the 99 Greensboro Senior High School alumni lost during World War II is the centerpiece of the memorial room in the Sigmund Selig Pearl Field House at Grimsley. The first name on the plaque is John M. Albright, the cousin of current Whirlies football player Nolan Albright. “It hits different,” Nolan says. “It shows that my family was in that war. Someone in my family went to Grimsley, left Grimsley to fight in the war and came back in a box.”