GREENSBORO — Miss Lou Lou Gehrig may have been the runt of her litter, but the Greensboro Grasshoppers bat dog made a big impression on everyone who met her.

“She had a wonderful temperament,” said Donald Moore, the baseball club’s president and general manager. “She was such a gentle dog around kids.”

Moore and the Grasshoppers announced today that Miss Lou Lou Gehrig, the Labrador retriever who served as bat dog for eight seasons, died Monday night after a brief stomach ailment. She was 9 years old.

“She was little,” Moore said. “She was the runt, and that’s why Donald Jr. picked her out. That dog was tenacious and feisty, and she was really good at what she did.”

Lou Lou served alongside Miss Babe Ruth from 2012 through 2015, then by herself through the 2019 South Atlantic League baseball season. The Grasshoppers did not play this year because of the COVID-19 pandemic.

Lou Lou was known for not only picking up bats but for chasing down foul balls at First National Bank Field.

“Babe never could do this,” Moore said, “but she’d see a foul ball hit and instinctively chase foul balls. That got to be as big a part of what she did as getting bats.”

Lou Lou, her late aunt Babe and uncle Master Yogi Berra — all black Labs — provided entertainment at Grasshoppers games for almost 14 years and created a unique atmosphere at the ballpark.

Babe and Yogi were Donald Moore’s dogs, but Lou Lou belonged to son Donald Jr. He called his father Monday night and said Lou Lou hadn’t eaten since Sunday, so he took her to the veterinarian, who recommended that she be seen at N.C. State.

The staff at N.C. State came out and got her from the car since the family could not enter the facility because of COVID-19 protocols.

“Donald Jr. said she walked into the place,” Donald said, “but within an hour she was dead.”

“When Lou Lou was not working at the ballpark, she loved fetching her dad’s morning newspaper, playing Frisbee at home or at her favorite spot, early mornings on the beach and being a very loving dog to her family,” Moore said in a news release. "She had a heart of gold.”

Moore called Lou Lou’s death “the end of an era” for the Grasshoppers. Her half-sister, Little Jackie Robinson, was once seen as a potential successor, but the younger dog had other plans.

“She was in training for right at a year,” Moore said. “A year and many thousands of dollars later she basically told that trainer to go jump in a lake because she wasn’t interested. She’s adorable and a great dog, but … she has no interest in being out on the field chasing balls or fetching bats.”

Lou Lou, Babe and Yogi will be with fans for many years to come. All three will be memorialized as statues that will be part of a streetscape at Bellemeade and Eugene streets just outside the ballpark.

The 3-month-old black Labrador retriever is a niece of Miss Babe Ruth and Master Yogi Berra, and the younger sister of Miss Lou Lou Gehrig.

The 12-year-old black Labrador retriever was a fixture at Greensboro Grasshoppers games all her life. She was diagnosed with inoperable cancer in January.

Master Yogi Berra, the beloved 9-year-old black Labrador retriever, was a fixture at Greensboro Grasshoppers games since 2009. He was diagnosed with inoperable cancer in July. 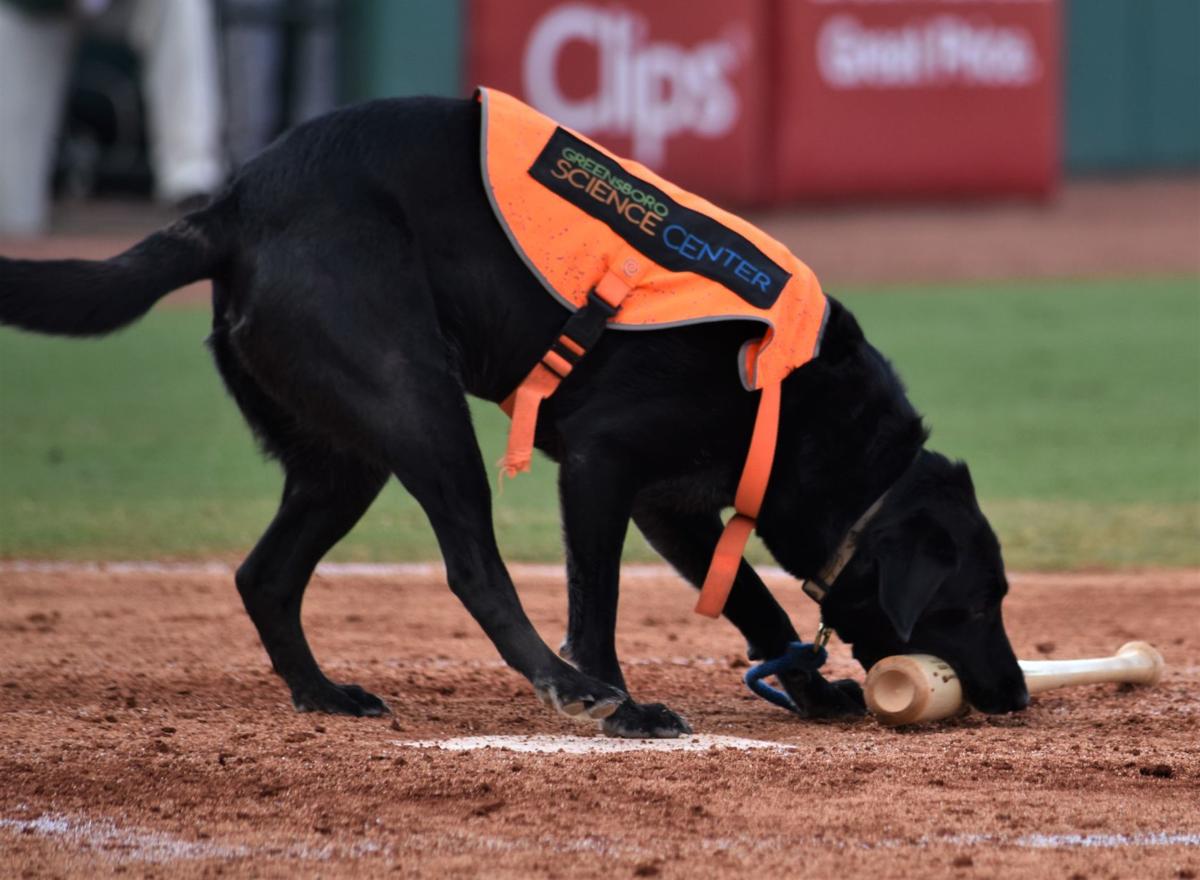 Greensboro Grasshoppers batdog Miss Lou Lou Gehrig picks up a bat at home plate during a game in August 2019. The black Labrador retriever died Monday night after a brief illness. 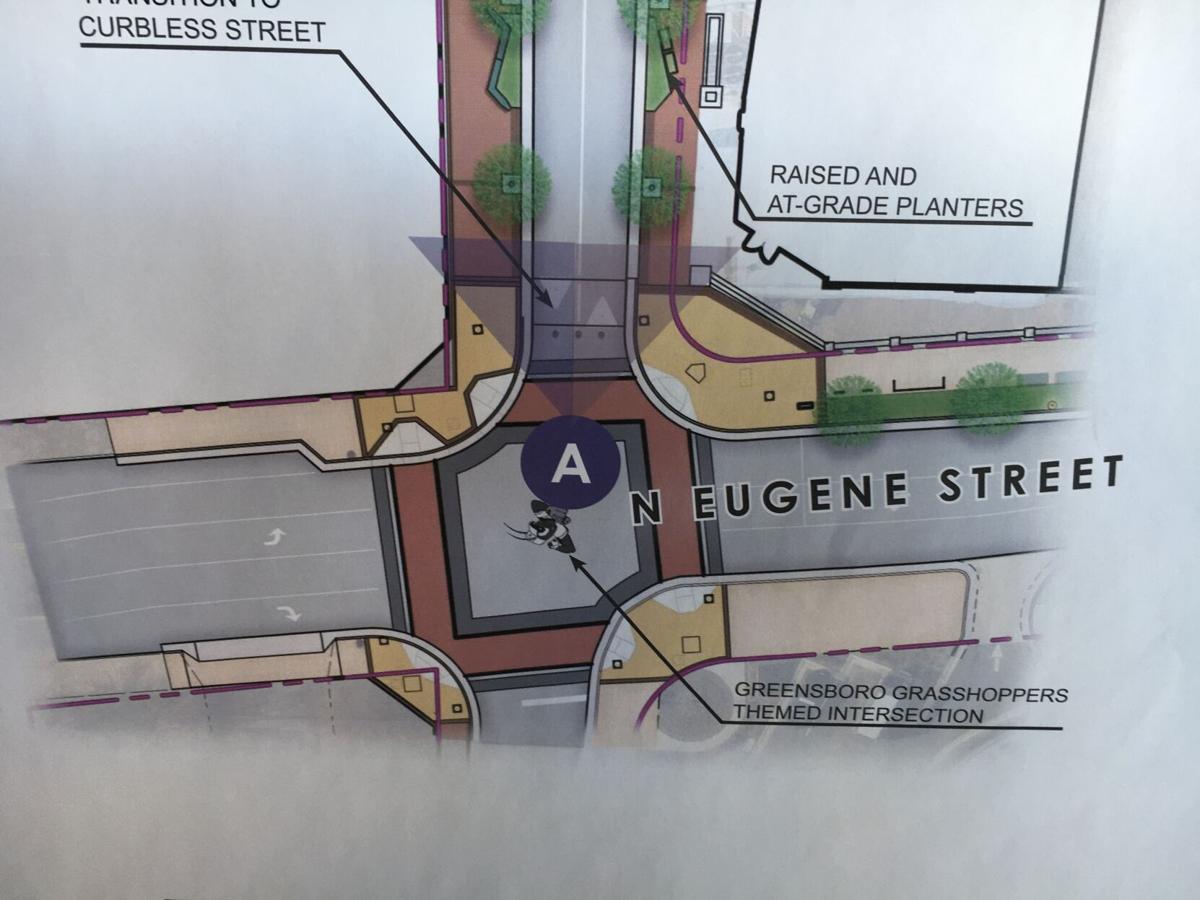 An architect's rendering shows the intersection of Bellemeade and Eugene streets in Greensboro just outside First National Bank Field, home of the South Atlantic League's Greensboro Grasshoppers. Part of the streetscape will memorialize Grasshoppers batdogs Miss Lou Lou Gehrig, Miss Babe Ruth and Master Yogi Berra. "It's going to be like a baseball diamond," said Donald Moore, president and general manager of the Hoppers, "and part of that diamond is going to have all three dogs, a first baseman, a second baseman and a third baseman — all statues — and an umpire at home getting balls from Babe. Yogi’s going to be running in to second base from center field with a ball, and Lou Lou’s going to be running around third base like she’s coming home.”