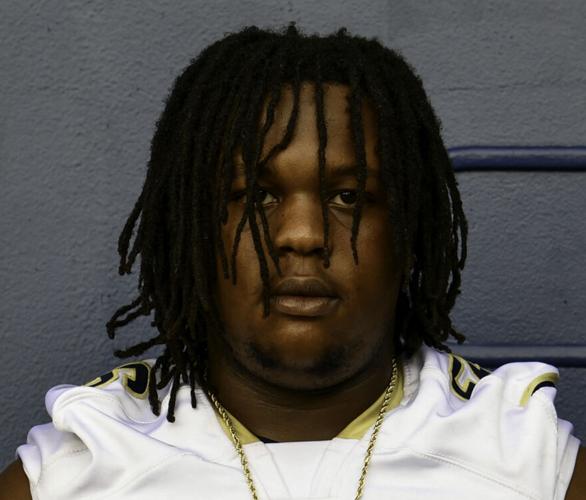 Senior two-way lineman Nashaun Price "is a great leader among the offensive linemen, the best we have right now,” says teammate Nhycer Kelly. 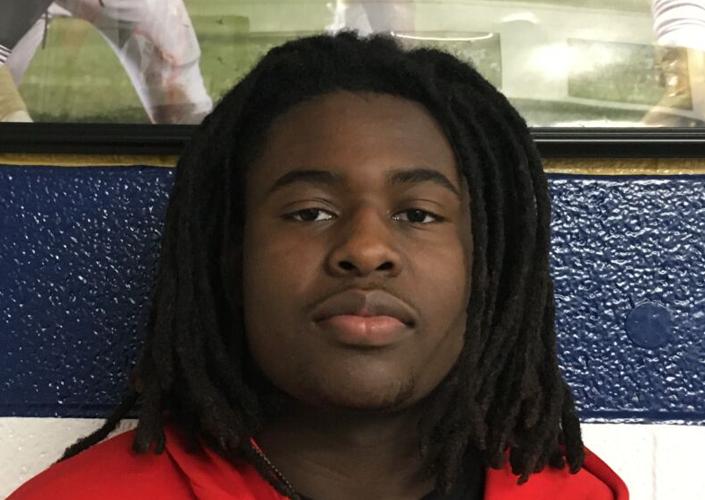 Senior two-way lineman Nhycer Kelly "played like 150 snaps or something like that this past Friday night” in a 32-14 win over Lawndale Burns, coach Jimmy Teague says. 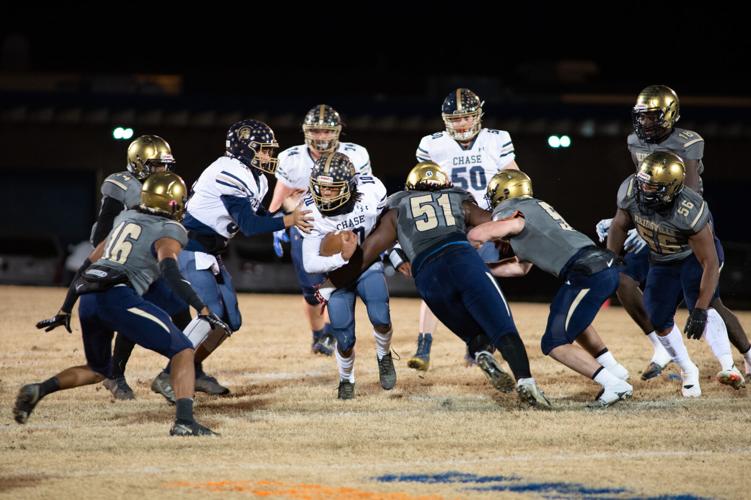 Reidsville junior lineman Nashaun Price tries to shake off Randleman quarterback Christian Long after stripping the ball and advancing deep into Tiger territory. The Rams would go on to win 49-7 in the first round of the 2A West NCHSAA state playoffs on Jimmy Teague Field at Community Stadium Friday night.

REIDSVILLE — The storied history of Reidsville High School football is full of big-time playmakers. That’s what happens when your program wins 22 state championships.

But this year’s Rams, like many of the great Reidsville teams that came before them, are also built on the leadership of the players who don’t get most of the headlines. The latest examples are senior linemen Nhycer Kelly and Nashaun Price.

Kelly plays left tackle on offense and three-technique (tackle) on defense, while Price is the other bookend on the O-line at right tackle and lines up beside Kelly as a three-technique lineman on defense. With so many underclassmen playing key roles for the Rams heading into Saturday’s NCHSAA Class 2-A championship game against East Duplin, coach Jimmy Teague needed Kelly and Price to be the coaches’ voice among the players.

“We count on our seniors to be leaders, and those guys have stepped up from Day 1 this season,” Teague says. “I told them, ‘You guys are the ones with experience, so you’ve got to be leaders.’ They’ve really embraced that role and done a great job for us.”

Kelly and Price have come a long way in four years as leaders and, just as importantly, as friends.

“We’ve been playing together since middle school,” says Kelly, a 6-foot-2, 275-pound lineman who recently received scholarship offers from Winston-Salem State and Fayetteville State. “At first, we didn’t really like each other and were kind of rivals, but over time we just became closer and closer. He’s like a brother to me. I love playing with him and I wouldn’t trade him for anybody.”

“We’re brothers,” he says. “Nhycer is one of the leaders and impact guys on defense. He makes the big plays. I look up to him a lot, and I’ve seen him come a long way.”

One of those big plays by Kelly — who has 89 tackles, 21 tackles for losses and six sacks — came during Reidsville’s 35-7 win over Maiden in the fourth round of this year’s playoffs, when Kelly pursued a Blue Devils running back and forced a fumble from behind.

“You’re talking about a nearly 280-pound guy running down a running back from behind and knocking the ball away,” Teague says. “That’s the kind of leadership you have to have.”

It’s what Price has brought to the practice field every day and the game field on Friday nights and now Saturday afternoon that stands out to Kelly.

“He’s a great leader among the offensive linemen, the best we have right now,” Kelly says.

‘We just had to put in the work’

As Reidsville (14-1) prepares to face East Duplin (14-1) at Kenan Stadium it’s easy to forget how things nearly went off the rails in Week 2 for the Rams. After a 44-7 win over Western Alamance, Reidsville traveled to Page to face a Pirates team coached by former Rams coach and player Doug Robertson. Page pounded the Rams with its running game and held on for a 22-14 victory.

“We went into that game too cocky and took them too lightly,” Price says. “After that game, we knew that we could lose a game and that helped us move forward and take things more seriously.”

Adds Kelly, “The Page game showed us what our weaknesses were. Seeing how we let down the community with that loss motivated us. We knew how good we were. We just had to put in the work.”

Two weeks later, Reidsville turned things back around with a 35-28 win over a very good Eastern Alamance team at Community Stadium. “The Eastern Alamance gave us some hope,” Kelly says, “and after that it was a different season.”

The Rams have won 13 straight games since that loss to Page on Aug. 26. Along the way a number of playmakers have emerged, including junior linebackers Aidan Mansfield and Paul Widerman and freshman athletes Kendre Harrison and Dionte Neal. But a constant has been the play and the leadership of Kelly and Price.

The ability of Kelly and Price to go both ways on the line and sustain their level of play “starts in practice,” Kelly says. “The coaches have a good practice scheme for us and we work hard. We’ve been running hills since the first week because we have to be in shape.”

That level of conditioning and commitment makes it easier for Kelly and Price to demand the same from their teammates. Kelly credits former Rams Ki Rankin, Isaiah Mosqueda and Breon Pass, who helped Reidsville win its most recent state title in the spring 2021 season, with showing him how to lead. “Those guys paved the way,” he says.

For Price, it was Trey Pickard, a lineman on the 2019 state championship team who served as a model for leadership.

“I watched the seniors that whole week,” Price says. “They told us what to do and showed us their leadership. What I tell the younger guys is, ‘Look up to your seniors. The seniors will take you a long way.’ ”

Kelly, Price and the rest of Reidsville’s seniors have taken them back to the place where the Rams expect every football season to end: the NCHSAA Class 2-A championship game.

“It feels good,” Kelly says. “I love the fans, and they just support us no matter what.”

He does acknowledge that “there’s definitely some pressure,” but being a part of the Reidsville program is something neither Kelly nor Price would trade for anything.

“I’ll remember pregame Thursdays and Fridays, having fun with the team before games,” Kelly says. “I’ll probably remember that the most.”

Coaching Kelly and Price has meant a lot to Teague, who also is their offensive line coach.

“They hear me hollering at them every day,” the Rams’ head coach says, “but it’s truly been a pleasure to coach them for these four years.

Chris Rusiewicz, who coached at both Guilford College and Greensboro College and was a defensive coordinator at Northern Guilford, was introdu…

What Messi says he regrets during the World Cup

What Messi says he regrets during the World Cup

Mahomes and Hurts to make history at Super Bowl LVII

Mahomes and Hurts to make history at Super Bowl LVII

Senior two-way lineman Nashaun Price "is a great leader among the offensive linemen, the best we have right now,” says teammate Nhycer Kelly.

Senior two-way lineman Nhycer Kelly "played like 150 snaps or something like that this past Friday night” in a 32-14 win over Lawndale Burns, coach Jimmy Teague says.

Reidsville junior lineman Nashaun Price tries to shake off Randleman quarterback Christian Long after stripping the ball and advancing deep into Tiger territory. The Rams would go on to win 49-7 in the first round of the 2A West NCHSAA state playoffs on Jimmy Teague Field at Community Stadium Friday night.