GREENSBORO — Steven Davis and Steven Davis II will always be father and son. But they’ll only be coach and player for one more night.

The longtime Dudley coach and the senior defensive back will try to win a state football championship Friday night when the Panthers take on Greenville J.H. Rose at Kenan Stadium in Chapel Hill. A title would be Steven’s fifth as Dudley coach but the first for Steven II, the player everyone in the program calls “Deuce.”

A journey that began with Deuce running around the sideline at age 3 or 4 then becoming a ball boy at 6 or 7 will end with him anchoring the secondary for a team that is 14-1 heading into the NCHSAA Class 3-A title game.

“The four years went by so fast,” Steven says. “I can just remember when he got here as a ninth-grader – a little thin, short thing. He’s finally got some height on him. Overall, it’s been a blessing.”

“If we win the game Friday,” Deuce says, “that will be the best part, winning a championship for him.

“I’m just thankful for him. He’s always been there.”

'He has to earn his keeps'

Steven Davis II has always been a part of the Dudley football program, watching and learning while his father built a program that has been one of the state’s best during his 18-year tenure. He saw firsthand what it would take to play at the college level and even in the NFL, something former Panther Emmanuel Moseley is doing with the San Francisco 49ers.

“It was fun,” Deuce says of his experience as a ball boy watching practices and games. “It helped me learn the game a lot better. Just watching some of the Dudley greats go by made me want to play like them.”

He was on the sideline as a ball boy with future teammate Mehki Wall when Dudley won its most recent state championship, dominating Fayetteville Cape Fear 54-0 in the 2016 Class 4-A final behind current Tennessee quarterback Hendon Hooker.

“We really knew this was going to come, our time would come,” says Deuce, who turns 18 next month.

When it was time to graduate from ball boy to player, it wasn’t just a big step for the young defensive back. It was a huge step for his father.

The elder Davis is all business as a coach, and he understood that would be even more important with his son joining the Panthers. Steven knew everyone would be watching, including his wife, Deneane.

“Ever since he was small and started playing football, my wife used to tease me: ‘Our son’s getting a little older now, and you’ve coached everybody else’s sons. Now you have to coach yours,’ ” Steven says. “She would always say, ‘Don’t be too hard on him.’ I treat him just like any other player, though. I don’t show any favoritism, and he has to earn his keeps.”

Deuce knew he was walking into a potentially difficult situation. His father and the rest of the staff didn’t want to be harder on the youngster, but they couldn’t go easier on him, either.

“All of the coaches knew me coming in, so they kind of expected me to play well,” he says. “The coach’s son isn’t supposed to miss plays or make mistakes.”

One thing Steven says he “never did, especially when (Steven II and older sister Darah) were young was I never took work home. I’m always going to be Dad, but when we’re on the field it’s Coach. Actually, I don’t think he called me either, just, ‘Hey!’ ”

Deuce says his father has lived up to his promise to “flip it” from football to Dad when he gets in the car.

“Yeah, he’ll yell at me at practice,” he says, “but when we get home it’s like nothing happened … He gets on me about things like homework and keeping my room clean, but overall he’s a really cool dad.”

'Deuce is our leader'

Deuce played junior varsity for Dudley as a freshman and sophomore, and “everybody was doubting me because I was little,” he says. With work on the practice field and in the weight room he became a varsity contributor as a junior on a team that reached the Class 3-AA West regional final.

He’s still not big at 6 feet, 165 pounds, but Deuce is a playmaker. As a senior, he has 53 tackles, 16 pass break-ups and four interceptions for one of the best defenses in the state.

When the Panthers’ coach watches his son play he sees “a little smaller version of myself when I was in high school (at Calhoun Falls, S.C.) playing the same position, free safety,” Steven says. “I was a big hitter in high school and had great ball skills.”

Brandon Anderson, Dudley’s longtime defensive coordinator, says, “Deuce is our leader right now. He’s the one getting everybody lined up, checking coverages, because he’s been around the program so long and he knows the defense.”

His father has noticed what No. 2 contributes, but his focus has to be on the team over his son during games.

“When it’s a pass play I’m looking for him to make a play on the ball because I expect so much from him,” Steven says. “When he does make a play, an interception, a big hit … I don’t go tell him, but I’m proud of him because he has to work for his keeps.”

Does Deuce ever catch himself looking toward his dad on the sideline for approval?

“Sometimes when I miss a tackle or something like that I’ll look over at him and I can tell he didn’t like that,” Deuce says. “Other than that I’m locked in.”

After Friday night, the younger Davis hopes to continue his football career at the college level and pursue a degree in “the sports field.”

After having his son by his side for so many years, Steven will “have to find a way to balance my weekends where if he’s playing somewhere I have to be able to go see him, then get back for meetings.”

Before Deuce heads off to college, there is one more game to play and coach. One more night for father and son to share the experience that is Dudley Panthers football.

“It’s getting to be that time to get out there and venture, to go to school and get your education,” Steven says. “I’m just looking at the future and wanting him to be successful in society.”

After watching the younger Davis for all these years and coaching him for the last four years, Anderson says that won’t be a problem.

“Deuce is going to do anything you tell him to do,” the Panthers assistant coach says. “He’s yes sir, no sir, so you know he’s been raised right. Coach Davis isn’t going to accept anything less.”

Obviously, Deuce has learned so much more than football from his dad. He says the most important lesson is that “nothing is going to come easy for you. You still have to work for everything that you want in life.”

There may not be any public displays of affection between Steven and Deuce, but that doesn’t mean the feelings and the pride aren’t there.

“I love him so much,” Steven says. “I tell him and his sister all the time that they mean the world to me. I tell people when they were younger … I always told my players, ‘I love you guys to death, but I’ve got two at home that I love just a little more.’ ”

What would it mean to father and son to walk off the field together Friday night as state champions?

“Win or lose I’m going to get emotional,” Deuce says. “I don’t think I’m going to cry if we win, but I know some of my teammates are going to be crying and hugging. It’s going to feel like a dream.”

Adds Steven: “If somehow, some way we can pull out a win and get out of there healthy, it would just be the cream on the top of my career. If I didn’t coach another game after that, if we can win with him being by my side I could say I went out on top.”

The Greensboro Day alumnus will join FC Dallas of Major League Soccer as a goalkeeper after being drafted in the third round.

Two events in Greensboro this weekend will bring together high school basketball teams to commemorate the Martin Luther King Jr. holiday. The …

The Panthers will be joined by teams from Durham Hillside, Fayetteville E.E. Smith, Quality Education Academy and West Charlotte.

The Whirlies improve their record to 4-0 in the Metro 4-A and 12-1 overall in boys basketball.

All-conference teams for leagues that include area teams.

The Nighthawks are 4-0 in the Metro 4-A Conference and 11-0 overall after pressing their way to a 52-37 win over Northwest Guilford.

The Bengals win the HAECOIsHiring.com Invitational for the 18th time overall and the ninth time in 10 years.

The Battle of the State Invitational includes eight games. 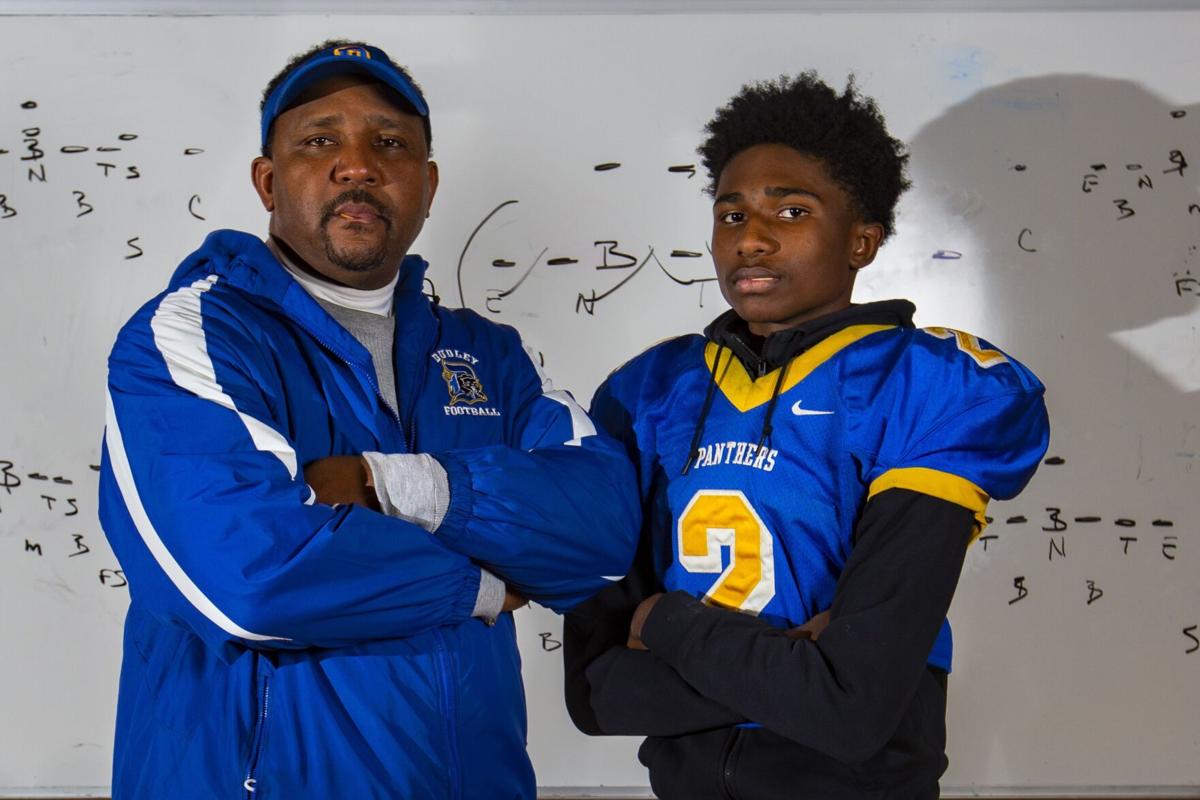 Dudley head coach Steven Davis and his son, senior DB Steven Davis II, will be together for one more football game Friday night when the Panthers take on Greenville J.H. Rose in the NCHSAA Class 3-A final. 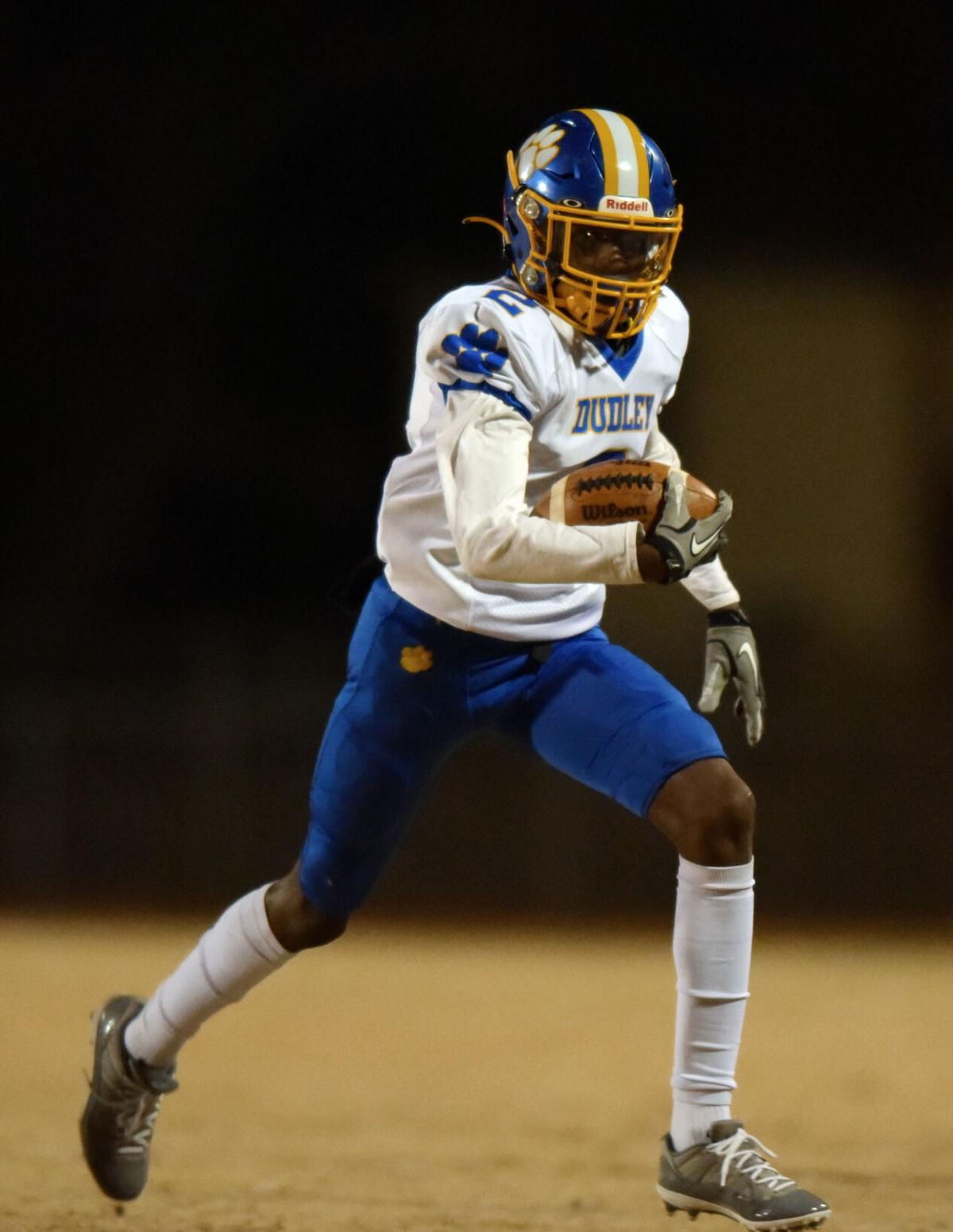 Dudley’s Steven Davis II runs back an interception during the first half of the Panthers’ 20-6 win at Statesville in the NCHSAA Class 3-A playoffs. Davis leads Dudley with four interceptions this season and has broken up 16 passes. 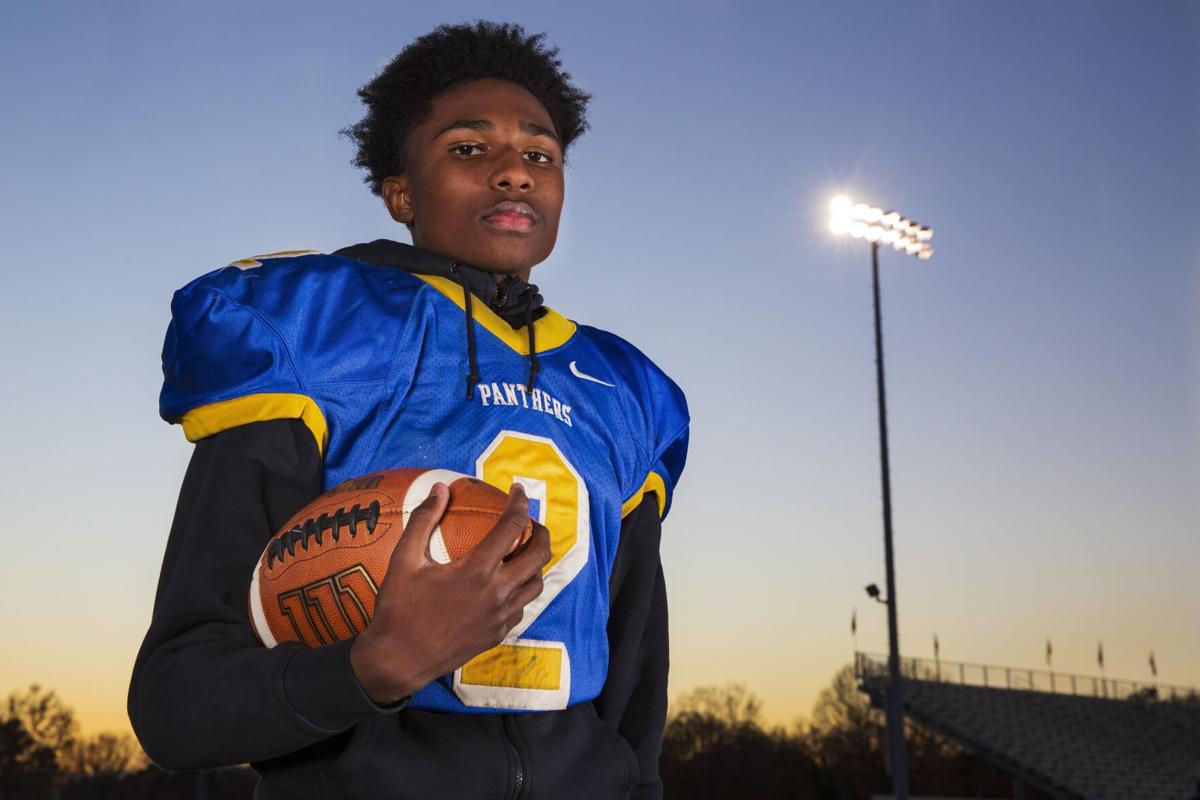 Dudley senior defensive back Steven Davis II on playing for his father one last time in the NCHSAA Class 3-A championship game: “Win or lose I’m going to get emotional. I don’t think I’m going to cry if we win, but I know some of my teammates are going to be crying and hugging. It’s going to feel like a dream.” 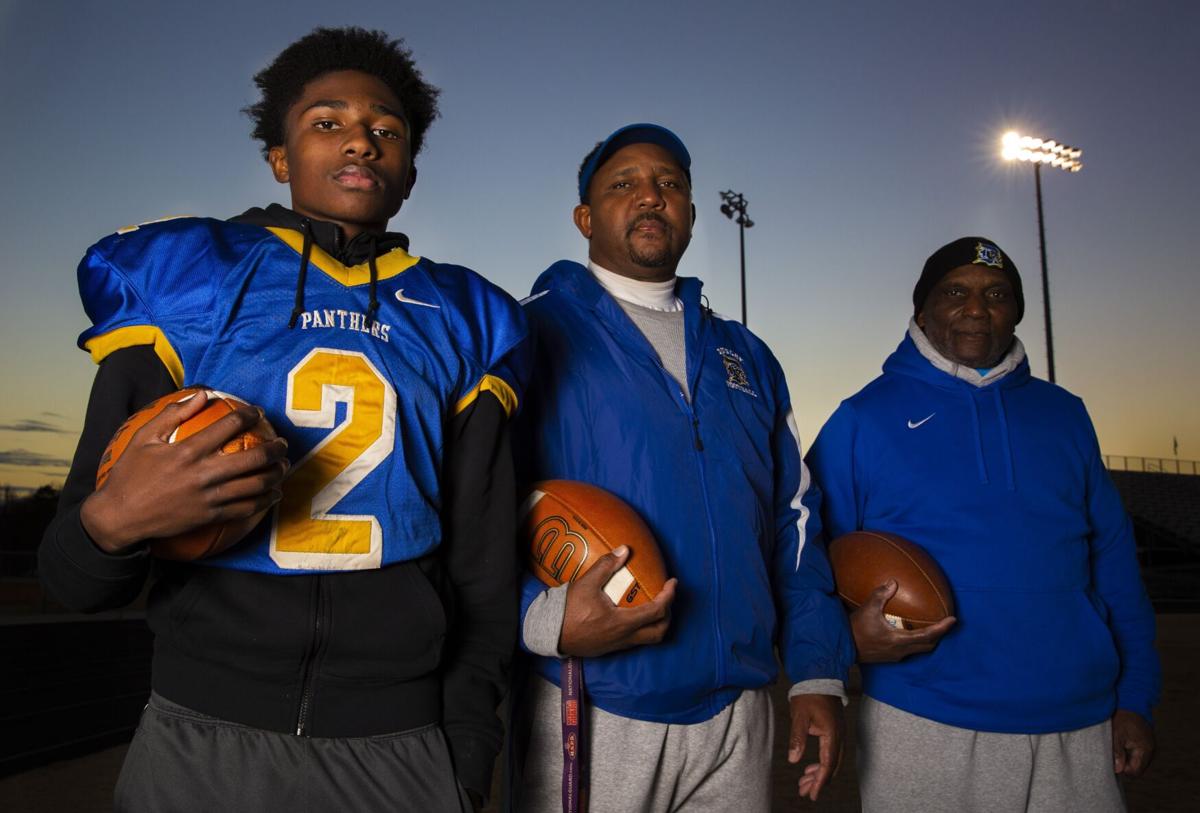