N.C. High School Athletic Association bylaws require that the association realign its schools every four years, even amidst a coronavirus pandemic. The NCHSAA announced procedures and guidelines for the latest realignment, which will take effect with the 2021-22 school year, on Tuesday and posted an 11-minute video explaining the changes to the process, which will include not just enrollment but athletics success and socioeconomic statistics. Here are the highlights:

• The state has been split into East and West regions for the four-year realignment period. 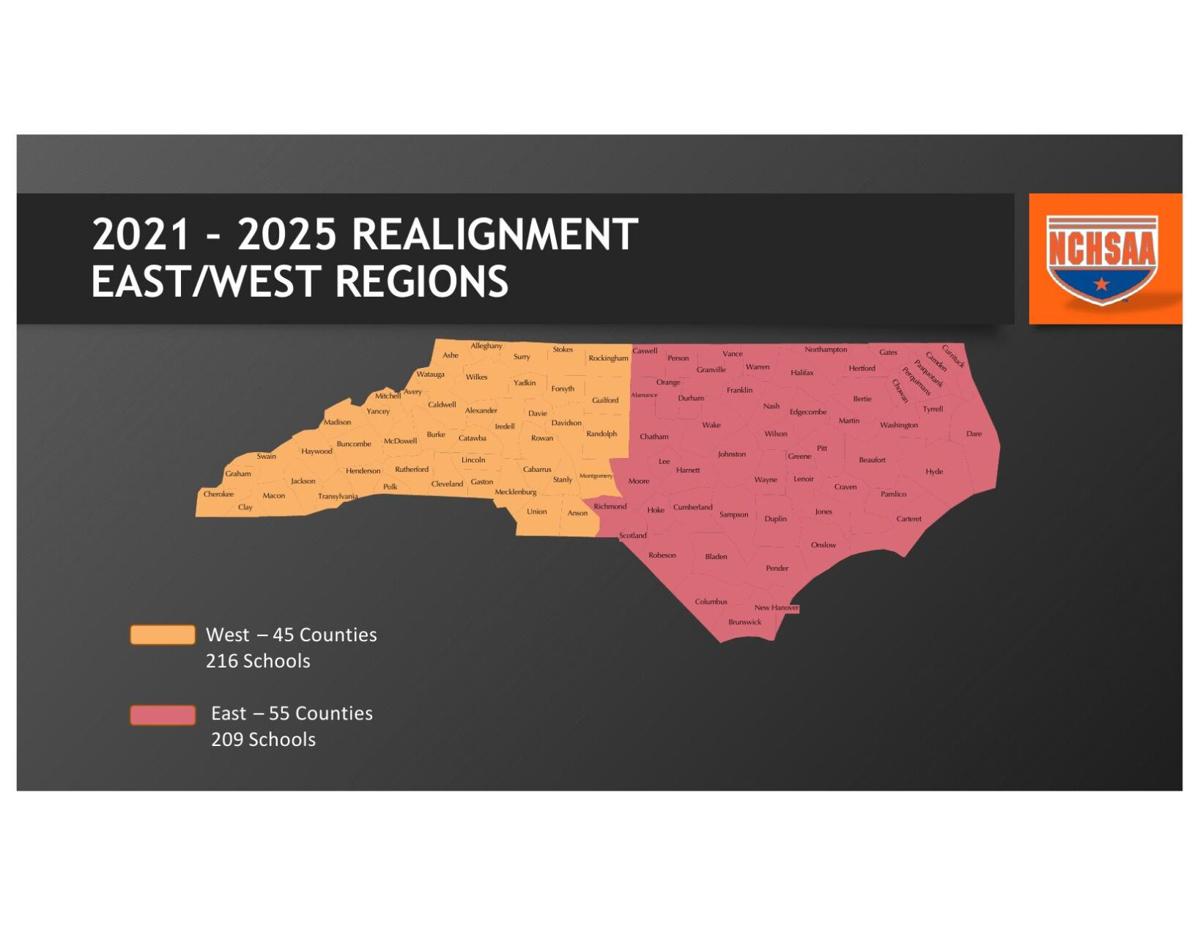 • Schools will be placed into four classifications within each region, with 25 percent placed in Class 4-A, then 25 percent in 3-A, 2-A and 1-A.

• The classification of each school will be determined by a Realignment Score. Instead of using just the Average Daily Membership (enrollment number) for a school as the NCHSAA has in the past, the Realignment Score will be 50 percent a school's 2019-20 ADM number, 25 percent a school’s average State Cup score for the previous three years and 25 percent a school’s average Identified Student Percentage (ISP) score for the previous three years. (The ISP represents the number of a school’s students who are on some form of government assistance.)

• The regional dividing line falls on the eastern borders of Rockingham, Guilford, Randolph, Montgomery and Anson counties, which will be in the West. That means Alamance County schools will no longer be in conferences with Guilford or Rockingham county schools.

Dec. 10: After review by the NCHSAA’s Realignment Committee, the first draft is released to the schools.

Jan. 8, 2021: Deadline for schools to submit “concerns or adjustments” to the initial realignment draft.

Jan. 13-14: Realignment Committee meets to review that information and will distribute a second draft to the schools.

Jan. 21: Deadline for schools to appeal to the committee.

Feb. 10: Deadline for final appeals to the Realignment Committee.

Feb. 17: Final realignment report submitted to the NCHSAA Board of Directors.

March (date TBD): Board of Directors hears any final appeals based on procedural errors only and votes on the final draft.

GREENSBORO — Ken Ferguson’s tenure as boys basketball coach at Dudley has ended after four seasons, but he remains a Guilford County Schools e…

With no HAECO Invitational this season, four schools will open their season in the Big 4 Tip-Off Showcase.

THOMASVILLE — Scott Davis couldn't stay away from coaching baseball for long. The former Wesleyan coach has been named manager of the High Poi…

NCHSAA to require volleyball players to wear masks for games

One day after saying it would not reduce the number of spectators and participants allowed at indoor games, the N.C. High School Athletic Asso…