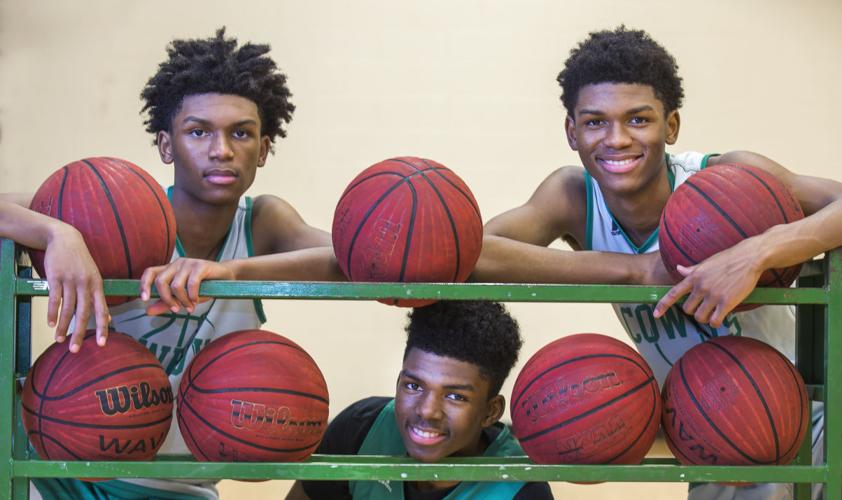 The Southwest Guilford basketball team has won its first 22 games, thanks in part to twins Keyshaun (top left) and Kobe Langley and brother Kameron Langley. 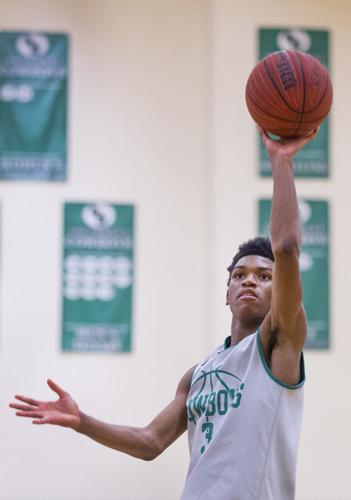 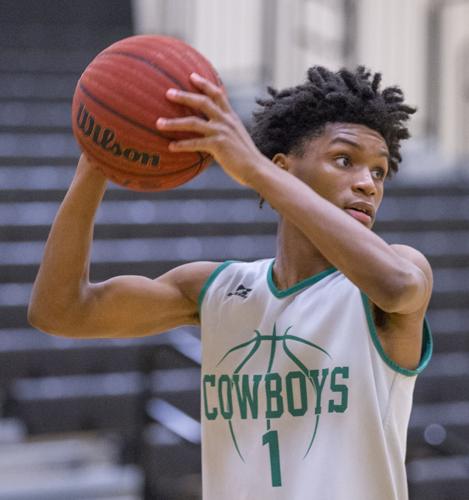 Keyshaun Langley and Southwest Guilford have a 22-0 record. 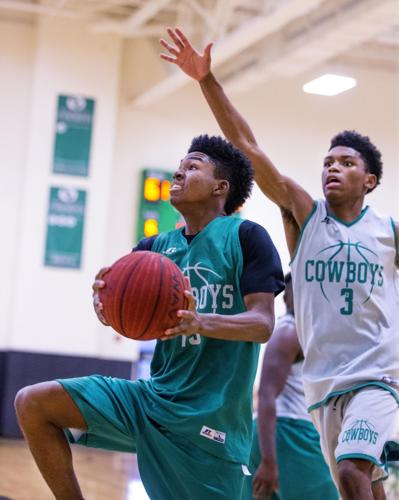 Southwest Guilford's Kameron Langley is the older of the Cowboys' three brothers.

HIGH POINT — Siblings playing on the same team is not a remarkable occurrence, but it’s hard not to marvel at the success of Southwest Guilford’s Langley brothers — Guilford County’s reigning first family of high school basketball.

Since the winter of 2010, some combination of the four brothers — K.J., Kameron and twins Kobe and Keyshaun — has played a prominent role for the Cowboys. It’s no different this season, as Southwest has raced to a 22-0 record heading into Tuesday night's matchup with Northwest Guilford with Kameron, a junior, and the freshman twins as a part of the starting lineup. If one looks back a few years, the Cowboys’ starting lineup has featured more than one Langley since the 2011-12 season

Oldest brother K.J. teamed with Kameron for two years and helped the Cowboys go 20-5 (10-0 in the Piedmont Triad 4-A Conference) last season before going to Livingstone. Any rejoicing done by Cowboys foes after his graduation was short-lived, however, as K.J.’s departure simply made way for the twins. Now, instead of having two Langleys to deal with, there are three.

Kobe and Keyshaun are no strangers to winning and winning big. They won AAU national championships in 2013, 2014 and 2015 as a part of the Team CP3 club coached by another Langley, dad Keyford. Once coach Guy Shavers inserted both into the starting lineup, Southwest’s frenetic, athletic style hit another gear.

Having his two brothers on the floor at the same time has been a good change, Kameron said.

“It’s been great,” he said. “It’s been a lot easier, because now we have a lot more chemistry on the floor.”

That chemistry has allowed Kameron to build upon a breakout season in 2014-15, in which he averaged nearly 16 points and six rebounds per game.

“Since we play small, my rebounding has gone up from last year,” he said. “I’m handling the ball more, so my assists have gone up. Since K.J. and Ben (Ferguson) left, my scoring has gone up, too.”

Kameron isn’t the only Cowboy who has benefited from the twins’ arrival. Senior forward Kaymon Mitchell, who Shavers said is the key to Southwest’s season, has enjoyed a spectacular season.

“I don’t know what the other coaches are thinking, of course, but they focus more on the Langleys because they see what they can do,” Mitchell said. “And that leaves me and Orlando (Smith) open.”

While some teams might not have taken kindly to the arrival of highly touted underclassmen, the Cowboys welcomed the twins from the start. One of the benefits of the family legacy is that there was no need for a getting-to-know-you period.

“They fit in immediately because they came to the workouts when they were becoming freshmen,” Mitchell said. “And when they hit the floor they started clicking with us. Once that happened, we all knew this year was going to be something special.”

Shavers says the Langleys' leadership in particular has been special.

“They put demands on their teammates," the coach said. "There’s been times when I’ve told them, ‘We’re not going to have practice on Saturday.’ And then they’re calling me on Saturday saying, ‘Coach, when are you going to open up the gym?’ And when I get there, they are all standing out there. It’s one thing when I say it, but it’s something else when it’s coming from the team.”

The brothers insist they are a tight-knit group, choosing to hang out together even when they aren’t in the gym. However, there seems to be a general disagreement on who’s who personality-wise. While all four agree that K.J. is the most outgoing and outspoken, Kobe says he is laid-back like older brother Kameron, while Keyshaun is the “shy one.” Keyshaun says he is more like K.J. K.J., the elder statesman, laughed before trying to set the record straight.

Regardless of personality off the court, the Langleys share one personality on it: attack mode. Kameron creates problems with his quickness, athleticism and overall skill set. Keyshaun is a pass-first guard who is a staunch defender, while Kobe tries to live up to his namesake’s scoring ways.

“(Coach Shavers) knows I’m a scorer, so he says if I need a shot to go and take it,” Kobe said, “but stay inside the system and trust the system. “

The rematch with Northwest Guilford is essentially the last remaining test for the Cowboys before they begin tournament play. There’s also the matter of the undefeated record that, to a man, they say is unimportant. Except, of course, when an undefeated record is most important.

“Once you get into the playoffs and past the first round, I think that means a lot to us, and a lot to Southwest," Kobe said. "We are going to get this ring.”

What: Piedmont Triad 4-A Conference basketball.

After winning Game 1 on Friday night, the Eagles fall to Greenville D.H. Conley 2-1 and 3-0 on Saturday in the NCHSAA Class 4-A championship series.

The Southwest Guilford basketball team has won its first 22 games, thanks in part to twins Keyshaun (top left) and Kobe Langley and brother Kameron Langley.

Keyshaun Langley and Southwest Guilford have a 22-0 record.

Southwest Guilford's Kameron Langley is the older of the Cowboys' three brothers.