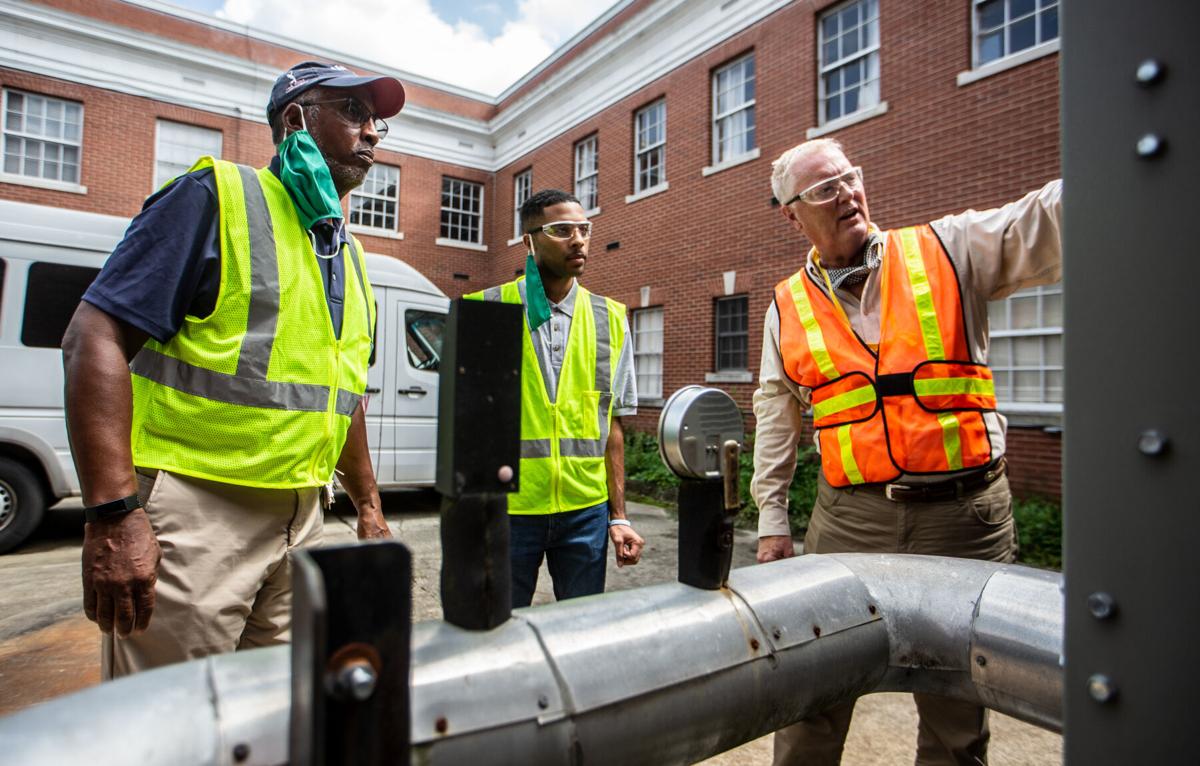 Kevin Cooper (left) and Jeff Farlow (right) talk with Elijah Bonds on a job site in Greensboro on Sept. 2. Farlow, the owner of Infrapros, a business that specializes in heating-and-air conditioning contracting, service and maintenance, sold part of his business to Cooper as a way to lessen racial disparities in his line of work. 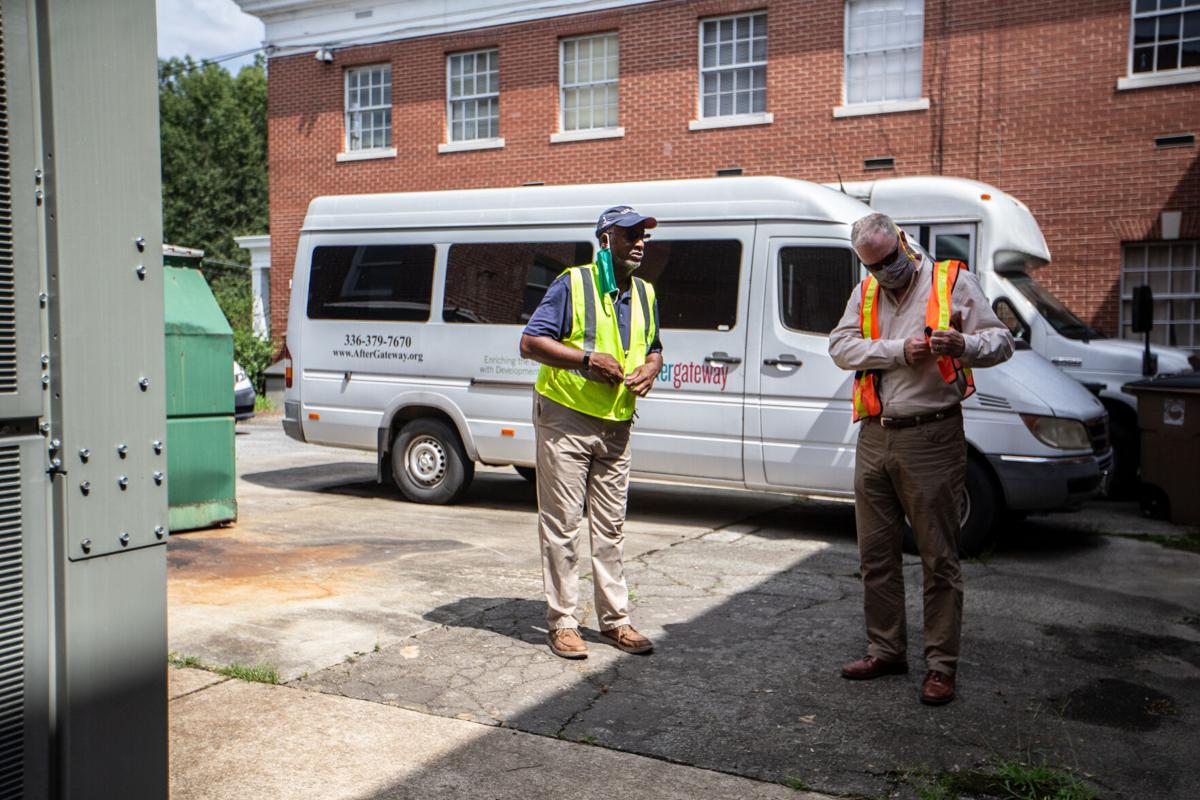 Kevin Cooper (left) and Jeff Farlow put on their safety vests on a job site. 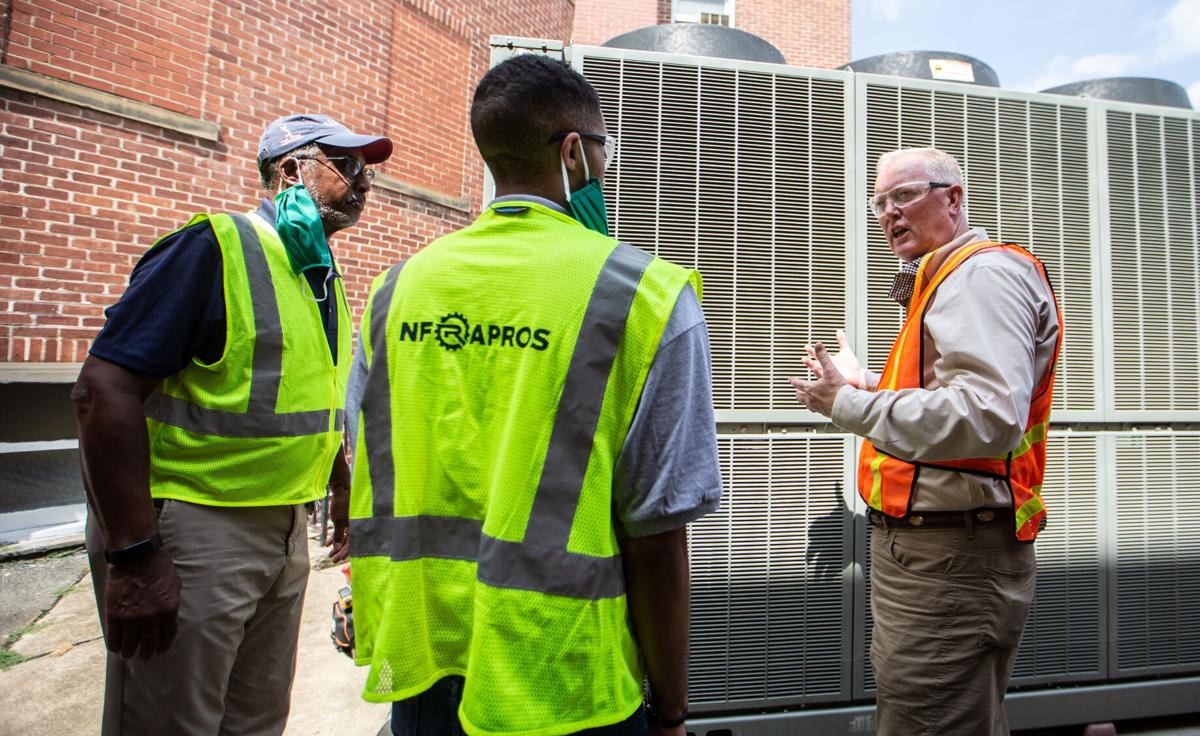 Kevin Cooper (left) and Jeff Farlow (right) talk with Elijah Bonds on a job site in Greensboro on Sept. 2. Mechanical contracting is a generational business, Farlow says. Meaning, it's passed down from one generation to the next. “Heating and air conditioning in particular was only available starting in the mid-50s, so the people that got in that business were guys that looked like me,” Farlow said.

GREENSBORO — When Kevin Cooper came to Infrapros and asked to be hired, Jeff Farlow couldn’t understand why.

Farlow was the owner of Infrapros, a business that specializes in heating-and-air conditioning contracting, service and maintenance. Cooper was a former client and successful in his own line of work.

“When I first met Kevin, he had such a tremendous knowledge,” Farlow said. “He was on it.”

He was impressed by Cooper’s skills as a facilities manager at Family Service of the Piedmont. Farlow said the work they did together resulted in over 30% savings on utilities at the agency.

Their mutual admiration of one another as businessmen morphed into a friendship, Farlow said.

But when Cooper asked about being hired at Infrapros earlier this year, it didn't make sense to Farlow. Why wouldn't Cooper just go into business for himself?

Farlow said as he listened to his friend talk about the great work they could do together, he kept thinking: Why do you need me?

“I mean, he’s smarter than I am on a bunch of this stuff,” Farlow said.

Then Farlow had what he called a “eureka moment.” There was a reason Cooper couldn’t break into mechanical contracting on his own, even though he had years of experience.

“He can’t get into this business because there’s a barrier."

There's a term for that: racial disparity.

According to the U.S. Bureau of Labor Statistics, there are a wide range of professions that lack representation from African Americans, from white collar to blue, from male to female.

In some industries, minorities are just a fraction of the workforce.

In others, and all too often, they can't be found in leadership or ownership positions.

And, of course, Farlow's field of mechanical contracting.

It's a generational business, Farlow explained. Meaning, it's passed down from one generation to the next. Like it was to him.

“Heating and air conditioning in particular was only available starting in the mid-50s, so the people that got in that business were guys that looked like me,” said Farlow, who is white. “They were able to get funding and start their business, and now, 60 years later, the names ... are very close to the names that started the business back then.”

Farlow said it's hard for anyone new to break into the field.

"But it’s even amplified," Farlow said, "because Kevin is Black."

In a business started by white people — white men, in particular — and passed down through the generations, Farlow suddenly became aware of the walls that kept Cooper out.

In a year filled with discussion surrounding racial disparities and systemic racism, Farlow said he didn't want to let an opportunity to enact real change pass by.

If a wall was going to keep Cooper from starting his own business, Farlow wanted to break it down.

They talked it over.

They viewed their partnership as something more than just a business deal. This was the first step to changing a white-dominated industry.

Another step was taken when Cooper asked to buy the majority of the business — and Farlow agreed.

As of July, Cooper has been calling the shots at Infapros.

During his time in the workforce, Cooper said it was rare to look around a room and see someone that looked like him.

But he doesn't see what Farlow did as a gift.

"This was no pat on the back," Cooper said.

No, it was something else.

They both want their partnership to send a strong message — that Black people can step into this industry dominated by white men and do it well.

"We've got a real opportunity with a partner like Kevin to bring new faces into the industry," Farlow said. "The mix between the two of us make for a dynamic company for our clients."

Maybe one day when people look at the mechanical contracting field, it will be filled with more people who look like Cooper.

That's what the men hope, anyway.

Cooper said he foresees Infrapros eventually bringing in other minorities, including women — another rarity in the trade.

"We want to give them the opportunities to be great," Cooper said, "to end generational poverty that is prevalent in America."

With Cooper owning a majority of the business, Infrapros has since been certified as a HUB — Historically Underutilized Business.

Cynthia Barnes, director of Guilford County’s minority and women’s business enterprise program, knows of instances where a previously white-owned business was taken over by a minority, but she said “it happens more often in larger municipal areas than our own.”

Apart from Infrapros being Black-owned, Cooper and Farlow want to prove it's the best mechanical contracting service around.

"We may go in and say, 'Hey, we're a HUB mechanical contractor,'" Farlow said. "But at the end of the day, we have to be better, right?"

In a way, Cooper is paying it forward.

He said he was given the chance years ago to enter into facility operations by a woman who worked in the field.

"That was an anomaly," Cooper said. "She gave me an opportunity."

In turn, he and Farlow, with their more than 60 years of combined experience, will do the same.

Farlow said he's still learning everyday about inclusion, but Cooper has opened his eyes to the necessity of it. Now, it's a mission.

"If somebody wants to get on board with us, come talk to us," Cooper said. "We'll train you."

It's a gesture that could go a long way.

"Kevin and I know that we may never see the full fruits of our labor," Farlow said. "We may not live long enough.

"But if we do our jobs right, there will be 100 minority contractors that can point their beginnings back to the work that we're doing now."

'A big man in a lot of ways': For decades, Mo Milani was the face of Greensboro to presidents, rock stars and the Everyman

Milani, who died over the weekend at 72, helped Greensboro build its reputation as a top convention destination, concert center and host of major amateur sports.

Kevin Cooper (left) and Jeff Farlow (right) talk with Elijah Bonds on a job site in Greensboro on Sept. 2. Farlow, the owner of Infrapros, a business that specializes in heating-and-air conditioning contracting, service and maintenance, sold part of his business to Cooper as a way to lessen racial disparities in his line of work.

Kevin Cooper (left) and Jeff Farlow put on their safety vests on a job site.

Kevin Cooper (left) and Jeff Farlow (right) talk with Elijah Bonds on a job site in Greensboro on Sept. 2. Mechanical contracting is a generational business, Farlow says. Meaning, it's passed down from one generation to the next. “Heating and air conditioning in particular was only available starting in the mid-50s, so the people that got in that business were guys that looked like me,” Farlow said.