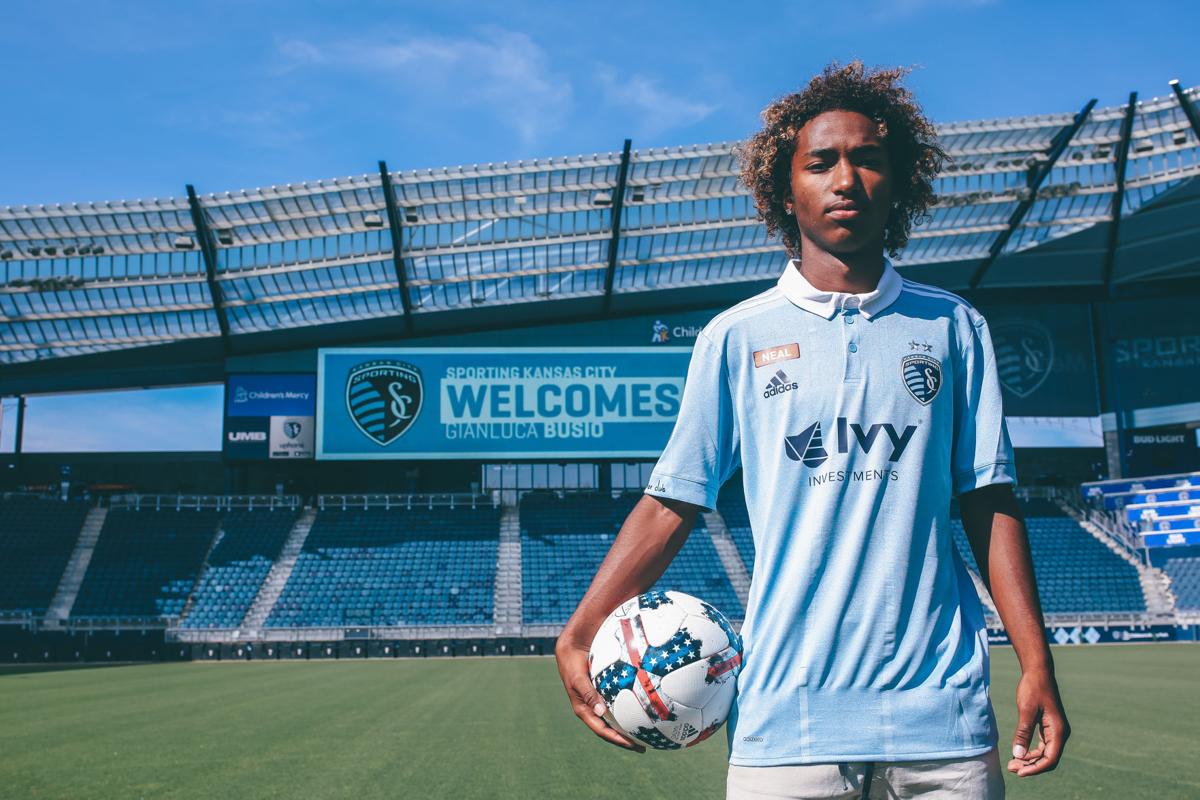 Gianluca Busio, 15, of Greensboro is considered to be one of the top young soccer prospects in the United States and is the second-youngest player to sign a professional contract with Major League Soccer. “When I first got here, I felt like they really wanted me here,” he says of Sporting Kansas City. 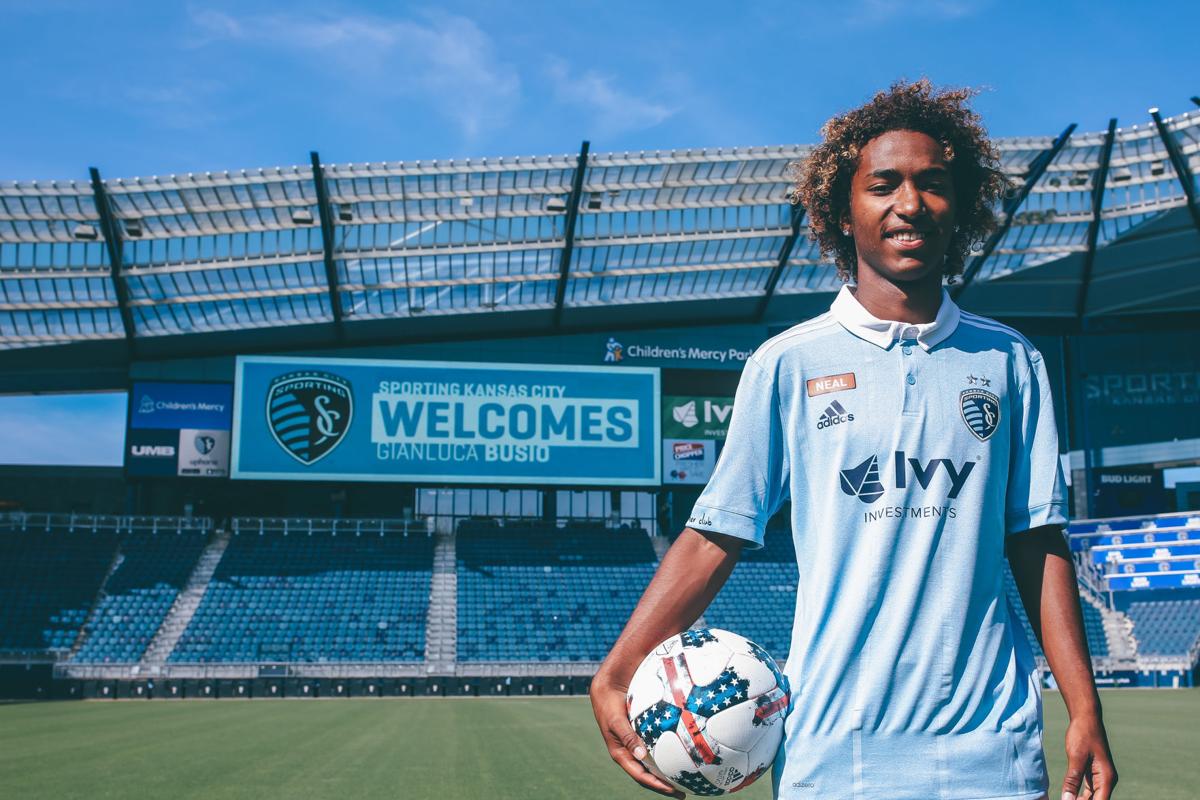 By Tim Nash Special to the News & Record

When Gianluca Busio first approached his mother about leaving home to pursue a professional soccer career, he was not very successful.

“I said, ‘You’re 13, you’re too young. Go do your homework,’” Dionne Busio, the mother of the second-youngest player to sign a professional contract with Major League Soccer, says with a laugh.

Gianluca, now 15, is considered one of the top young soccer prospects in the country. A year ago, he was playing for the Greensboro-based North Carolina Fusion Development Academy and was invited to a training camp with the U.S. under-15 national team.

“He came back from a U.S. camp and he had made friends with some other boys who played for MLS Academies,” his mother says. “He told us that if he wanted to play at that level all the time, he had to go to a MLS Academy. We said no and thought that would be the end of it. But Gianluca was relentless.”

Then more Major League Soccer teams started to contact the family. The New York Red Bulls called. Then Sporting Kansas City, Then the Seattle Sounders. Then the Philadelphia Union. They talked to Fulham FC in England. They all wanted Gianluca in their academy programs. Finally, Dionne and Gianluca’s father, Alex, relented. They started gathering information for the future.

The future came quickly, though. Gianluca joined the Sporting Kansas City Academy for the 2016-17 season. Then he had a tremendous performance with the U.S. under-15 national team at the CONCACAF championships in Florida, scoring five goals in five games.

“It’s a great feeling to be with a national team,” he says. “It’s a great accomplishment individually. It makes you work harder when you are wearing the crest and playing against other countries. For me to be able to do that and be part of the CONCACAF tournament with the U.S. team is just a great feeling.”

On Aug. 24, Gianluca signed a professional contract with Sporting Kansas City at 15 years and 89 days old, making him the youngest player since Freddy Adu to sign with the league.

“I didn’t expect it this soon, but a bunch of people had told me that MLS was starting to sign younger and younger players,” he says. “One of my U.S. teammates (George Bella) signed a pro contract before I did, and I was thinking that maybe I could get one. So, I knew it could happen, but I didn’t think it would happen this soon. I was amazed.”

His family finally grew comfortable with the idea of Gianluca moving away from Greensboro after visiting several MLS academies and talking to people they trusted. One was former Greensboro United Soccer Association technical director Marc Nicholls, who now holds a similar title with the Seattle Sounders Academy.

“We trust Marc as a soccer coach, as a person and as a parent,” says Dionne Busio, who works at UNC-Greensboro. “He told us that if Gianluca really wanted to pursue a professional career, he needed to play at that level all the time. All the clubs had really good programs and made really good points. The only problem was they weren’t in North Carolina.”

Gianluca got what he was looking for in Kansas City.

“When I first got here, I felt like they really wanted me here and they were making an investment in me,” he says. “The team was nice and like a family and they brought me into it right away. I felt they were interested in me and were going to focus on me.”

He is training with the Sporting KC’s first team and learning. Next season he expects to see time with Sporting’s United Soccer League’s affiliate, the Grove Park Rangers, to get some games in.

“Gianluca is a very talented player who has the opportunity to progress along our professional pathway from the academy to the first team,” Sporting KC manager Peter Vermes told The Associated Press. “He fits our style of play, has great vision on the field and can score goals from several different positions.”

As Gianluca learns from his older Sporting teammates, he is also learning about himself.

“I’ve learned I have a good work ethic,” he says. “When I first got here, I was the new kid on the team and I had to prove myself, so I had to work hard. You have to really work hard in practice. I didn’t come here and automatically become a starter. I didn’t start at the top. I had to work for it.”

Being the youngest player is not new to Gianluca.

“We started playing him up a year when he was 10 to challenge him,” says Wade Forte, the director of the Fusion Academy. “That’s when his competitive side started to show.”

Gianluca has played with older kids most of his life and is unfazed about being among the youngest.

“I never really thought about being too young,” he says. “Yeah, I’m younger, but like they say if you are good enough, you’re old enough.”

CARRBORO — Child care providers in North Carolina can begin applying next week for $805 million in grants designed to help them with payroll, …

Gianluca Busio, 15, of Greensboro is considered to be one of the top young soccer prospects in the United States and is the second-youngest player to sign a professional contract with Major League Soccer. “When I first got here, I felt like they really wanted me here,” he says of Sporting Kansas City.